Victoria’s staggering rise in locally acquired coronavirus cases is unprecedented and a threat to the whole nation, politicians and medical experts warned today.

Since last Monday Victoria has detected 628 new patients, only 13 of whom are returned overseas travellers in hotel quarantine.

This is radically different from the spike in cases across several states in late March and early April which saw large numbers of returning Australians test positive.

Locally acquired cases are more dangerous because the patients are not in quarantine and can more easily transmit the virus around the community. 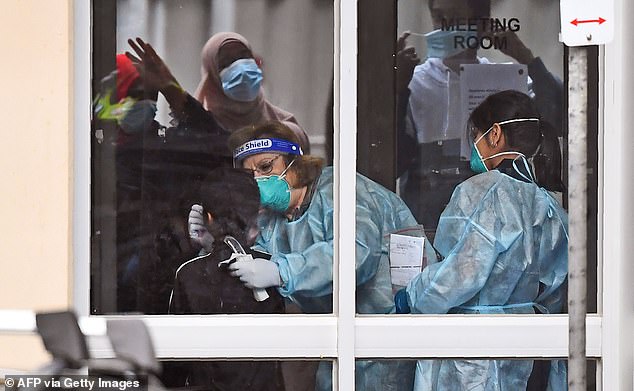 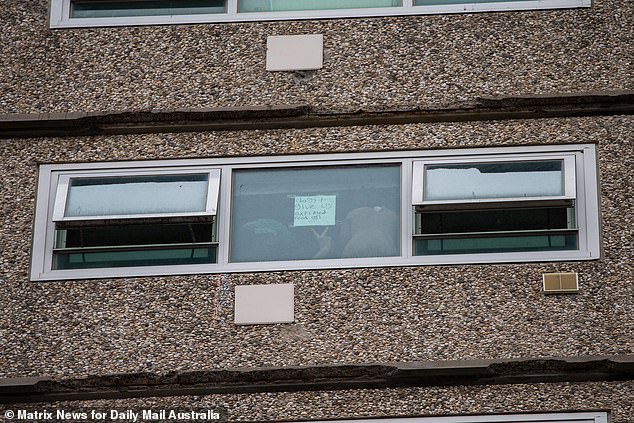 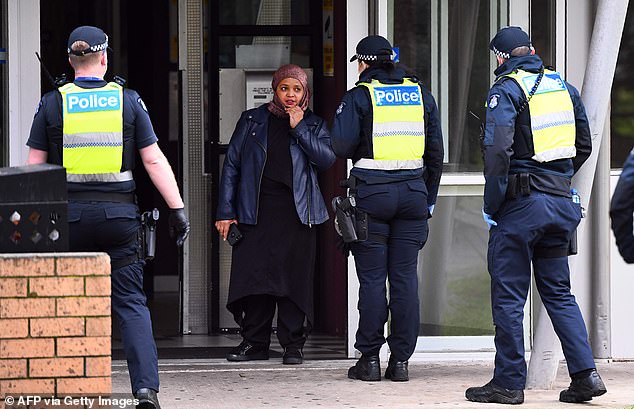 Since last Monday Victoria has detected 632 new patients, only 13 of whom are returned overseas travellers in hotel quarantine. Pictured: Police at a Melbourne housing estate 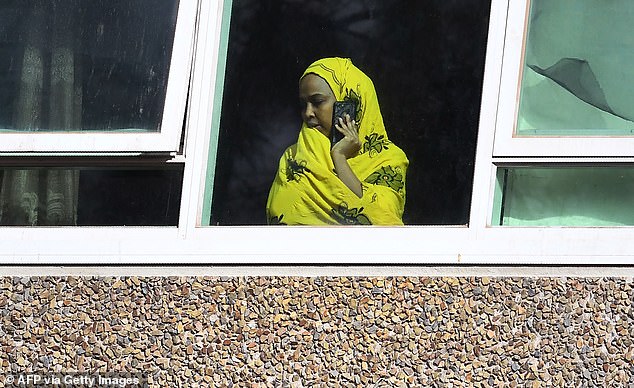 Paul Komesaroff, Professor of Medicine at Monash University, told Daily Mail Australia the situation in Victoria, where 12 postcodes have been put back into lockdown, is alarming.

‘It is an extremely dangerous situation and the safety of the entire country is at stake,’ he said.

‘Clearly there is a major problem that has required draconian measures which should be supported by Victorians to protect their safety.

Professor Komesaroff said he supported the border shut downs and localised lockdown measures which have proved successful in other countries such as South Korea and Singapore.

‘This a very different situation that we haven’t seen previously and we have to do what he have to do,’ he said.

He added that 3,000 public housing residents placed under total lockdown in north Melbourne should be given as much support as possible because many are refugees who have already been through ‘significant trauma’. 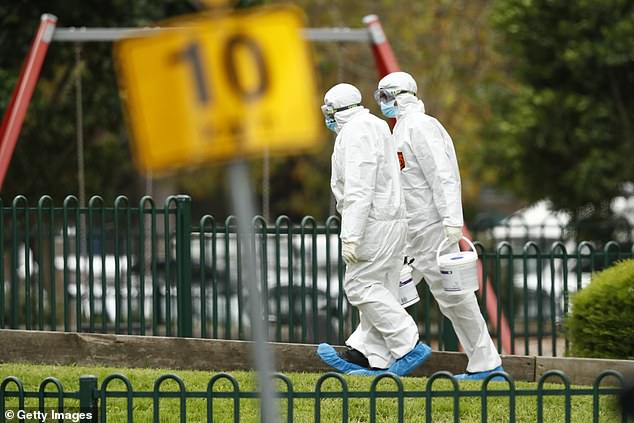 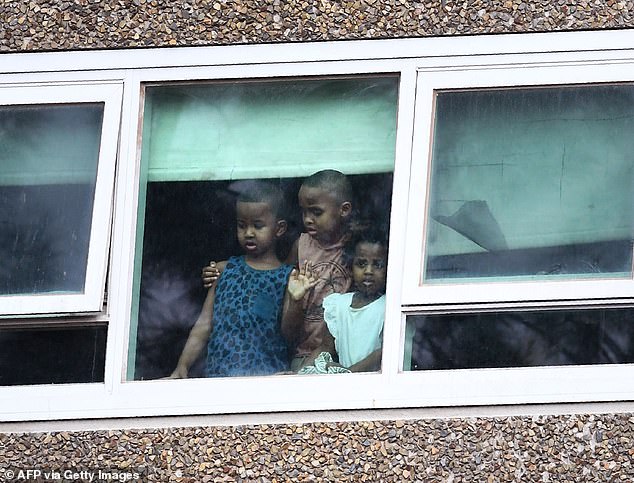 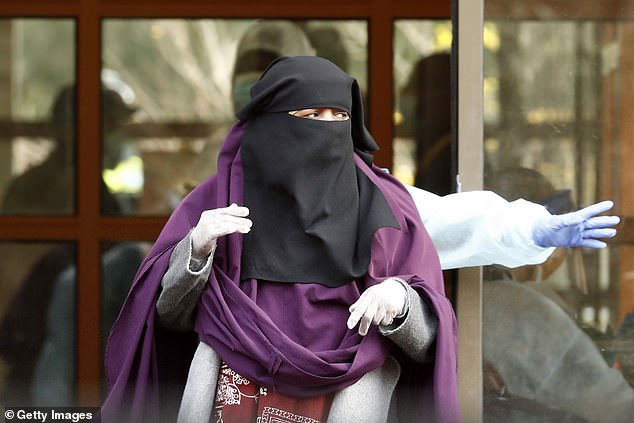 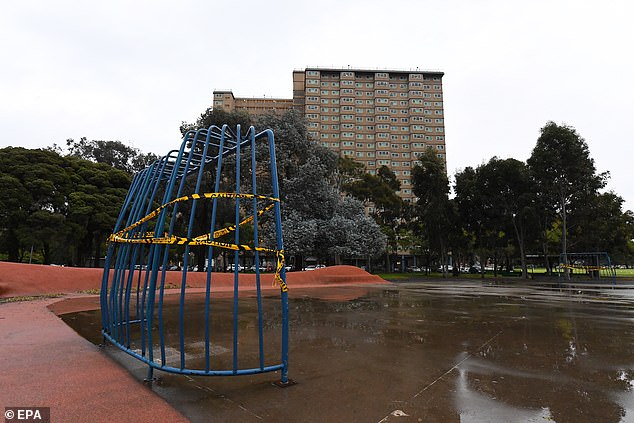 ‘The vast majority of cases that New South Wales and other states were experiencing were from overseas travellers or the direct contacts,’ she said.

‘All of the cases that the Premier Andrews announced today are from community transmission.

‘This is unprecedented in Australia. That is why the decision of the New South Wales Government [to shut the border] is unprecedented. We have not seen anything like this.’ 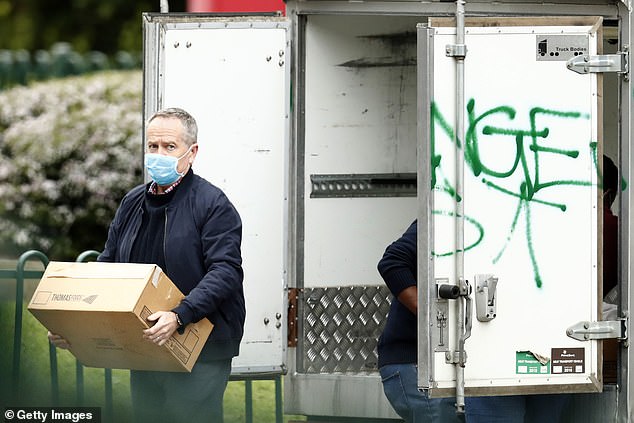 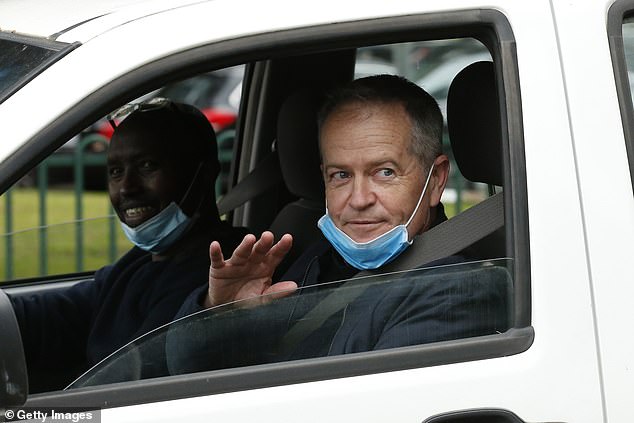 Mr Shorten waved to cameras as he helped out. Victoria recorded 127 new coronavirus cases on Monday – all locally acquired 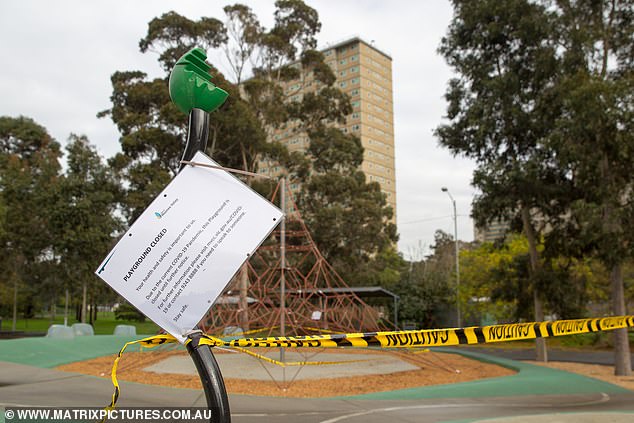 The decision to shut the NSW-VIC border was agreed by both premiers and the Prime Minister in a three-way phone call this morning after NSW Chief Medical Officer Dr Kerry Chant recommended the move at 8am.

The hard border will be enforced by New South Wales Police and the Australian Defence Force at all 55 crossings with roadblocks and drones to keep Victorian officers free to battle the state’s outbreak.

NSW Police Comission Mick Fuller said: ‘The task is not lost on me, in terms of the enormity of the logistics in this operation alone.’ 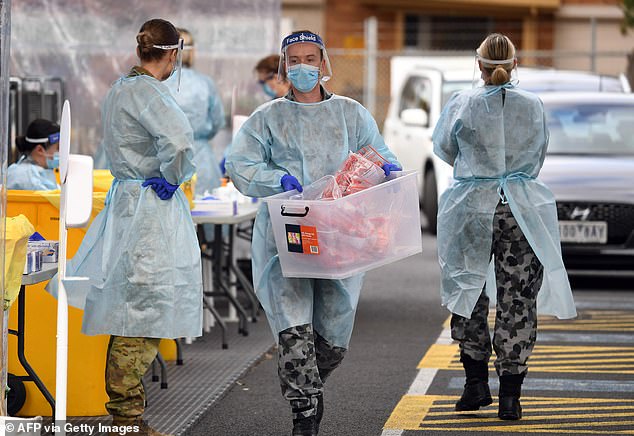 How will NSW-VIC border shut-down work?

The border will close from 12.01am Wednesday morning

It will be be enforced from the NSW side with roadblocks, drones and helicopters

The policy marks the first time the border between the two neighbours has been closed since between January and April in 1919, during the Spanish Flu outbreak.

Residents who live on the border will be able to apply for a permit from Service New South Wales allowing them to cross.

NSW Premier Gladys Berejiklian refused to say how long the closure would last and urged other states to remove their borders with NSW to boost the economy.

‘I say to all the other states around Australia, use this as an opportunity to now take off your borders with New South Wales,’ she said.

Earlier Mr Andrews announced that a Victorian man in his 90s has died, bringing the national death toll to 105.

Victoria has recorded more than 60 new cases of coronavirus a day since last Monday. Today’s new daily case count of 127 exceeds the state’s previous record of 111 on March 28.

Twelve Melbourne postcodes containing more than 300,000 residents were on Thursday forced back into lockdown and 3,000 residents of nine social housing towers were on Saturday totally banned from leaving their homes.

Twenty-six of Monday’s new cases are linked to the nine towers in Flemington, Kensington and North Melbourne where all residents are being tested.

The towers have now suffered a total of 53 coronavirus cases.

Meanwhile, West Australian premier Mark McGowan has asked the Prime Minister for a formal cap on numbers coming in to the state from overseas. He wants no more than one flight every three days.

He is also drafting legislation to make returned travellers pay for their own enforced quarantine. 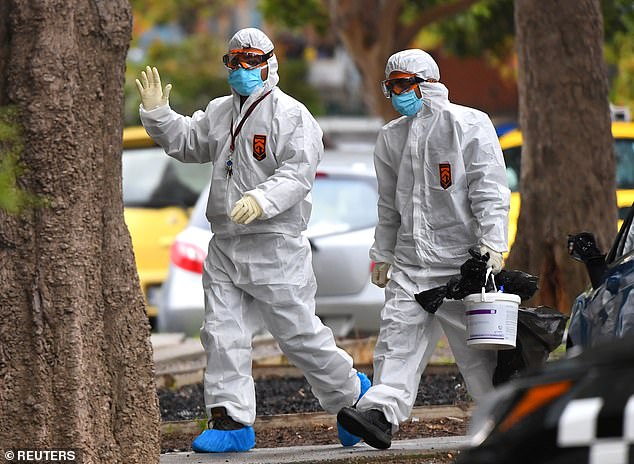 Workers in hazardous material overalls are seen outside of a public housing tower along Racecourse Road, Melbourne that was placed under lockdown due to the coronavirus disease 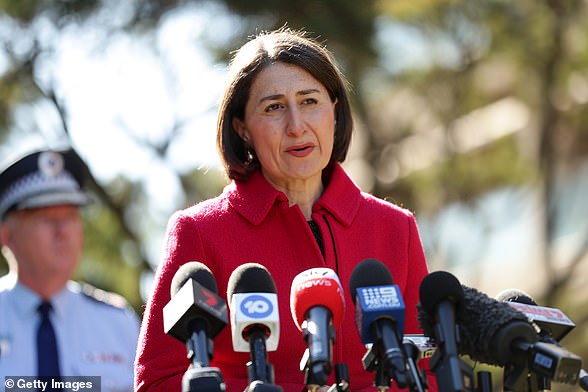 South Australia said it would open up to eastern states on 20 July but has postponed that decision due to the Victorian outbreak.