The Stella McCartney £2,000 handbag that was a mushroom and Nike trainers made from pineapple

With its supple, black exterior, chunky gold-and-silver chain and discreet magnetic clasp, it looks and feels like any other ‘It’ bag coveted by celebrities and wealthy shoppers the world over. But what makes this £1,995 half-moon clutch so groundbreaking is that no cow was harmed to make its leather.

The must-have Stella McCartney accessory began life as a mushroom – one that was cultivated in a huge indoor farm in the Netherlands before its fibrous ‘roots’ were turned into a durable, ultra-desirable fabric.

When the Frayme Mylo goes on sale on Thursday, it will set a new fashion watermark as the world’s first handbag made entirely from mushrooms.

McCartney, 50, says her design – which has an initial limited-edition run of 100 – will help shoppers make ‘conscious choices’.

When the Frayme Mylo goes on sale on Thursday, it will set a new fashion watermark as the world’s first handbag made entirely from mushrooms 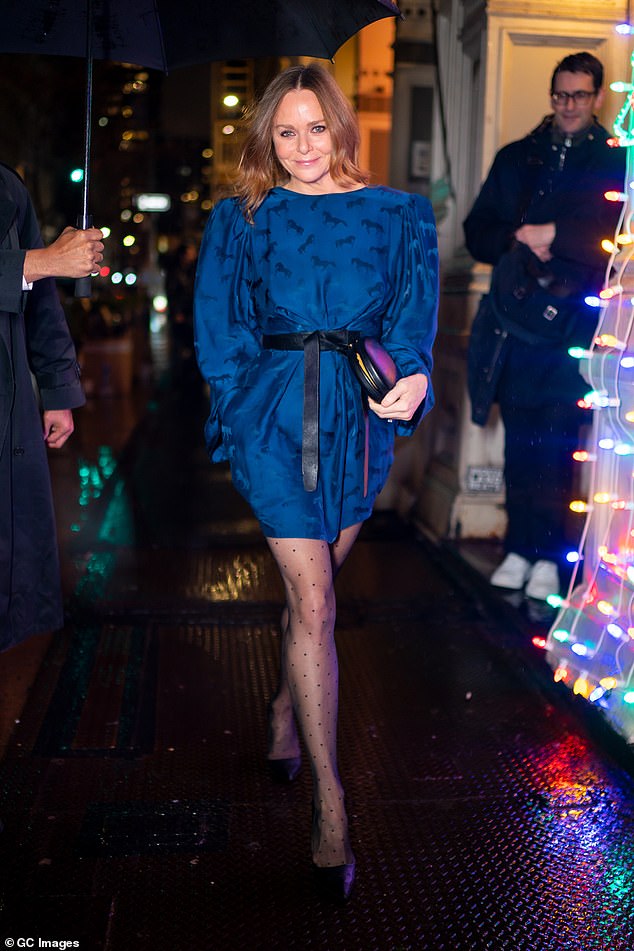 McCartney, 50, says her design – which has an initial limited-edition run of 100 – will help shoppers make ‘conscious choices’

‘I want to make it easier for people to make responsible fashion moves, while never compromising on beauty or desirability,’ she says.

The Prince of Wales, a fellow devotee of sustainable farming is already a fan. He and McCartney discussed her vegan range at the Cop26 climate change summit in Glasgow last November, and he reportedly found her exhibition ‘enlightening and inspiring’.

Motivated by her late mother Linda, a passionate animal rights activist, McCartney has not used fur, leather or any animal skins in her label since it launched in 2001. Now the rest of the fashion industry is following her commitment to sustainable, cruelty-free fashion with a trend that is set to revolutionise how clothes are produced, and hugely reduce the industry’s impact on the planet.

And the menu of materials being used to make them reads like a shopping list from the fruit and vegetable section at Sainsbury’s: as well as mushrooms, clothes will soon be spun from pineapples, apples, bananas and coconuts – even grapes left over from winemaking.

Pioneering bio-tech companies are committed to the same cause of sustainable fashion, but shun the label ‘vegan leather’ and instead make the material from cells taken from cows and fish and cultivated in a lab. Silicon Valley firm VitroLabs – which is backed by Kering and Hollywood actor and environmental campaigner Leonardo DiCaprio – is taking cell samples from living cows and turning them into leather in a San Francisco laboratory.

The process is similar to brewing: cells grown inside vats of nutrient-rich liquid are then spread out on racks where, over four weeks, they form into hide-like textiles.

Announcing his investment in May as part of a £39 million funding round, DiCaprio said: ‘Cell-cultivated leather rivals the qualities of animal leather while having a positive impact on climate change.

‘The level of research and refinement done to bring this product to life makes this an exciting industry moment.’ 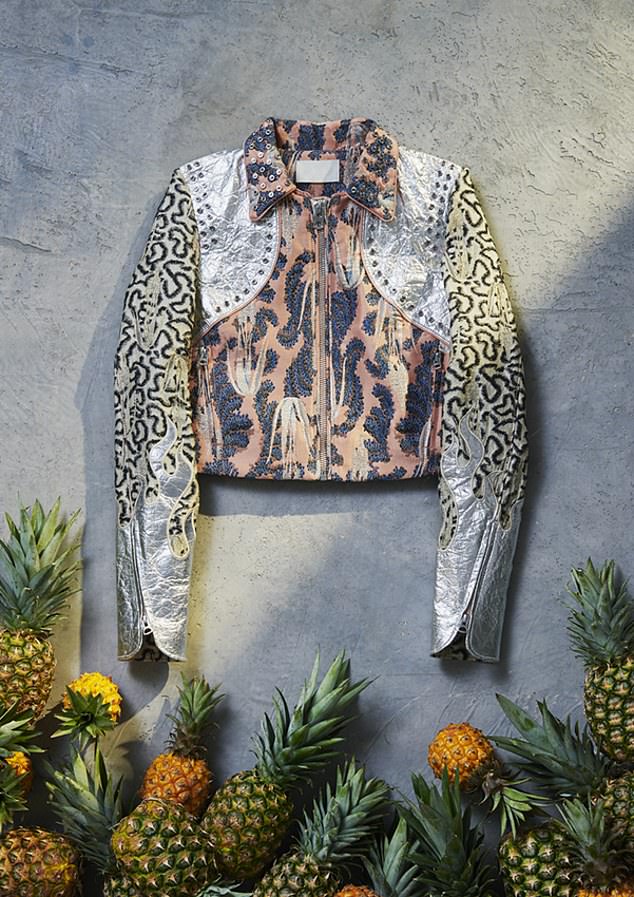 Fashion made from pineapple fibres, by a company called Pinatex are now in vogue

VitroLabs’ chief executive, former fashion designer Ingvar Helgason, believes that growing leather in a lab is the future of the fashion industry.

Not only will it prevent cows, pigs and goats being slaughtered for the hides that are in such demand by luxury fashion houses, but it will also use less water and harmful chemicals in the tanning process.

Helgason says: ‘The opportunity for alternative materials is huge. We see it as the size of the leather goods industry, worth $400 billion (£330 billion) globally. Any technology takes time to scale up, but the consumer demand is there and brands are responding to that.’

McCartney’s mushroom bag is made from mycelium – the fine, branch-like fibres that act like roots as they sprawl through soil.

They are turned into a material called Mylo by California-based Bolt Threads, which is also developing mushroom products with Kering, Danish label Ganni, and sportswear brands Lululemon and Adidas.

Its fungi are cultivated on vertical indoor farms in the Netherlands that are powered by renewable energy and take up a fraction of the land required to rear a cow for its leather.

Producing the base material for the textile takes less than two weeks, compared to several years it can take to raise cattle.

‘We then process and dye that sheet of mycelium, and it becomes the Mylo material that gets used to make footwear, handbags, wallets, phone cases and other gorgeous products.’ 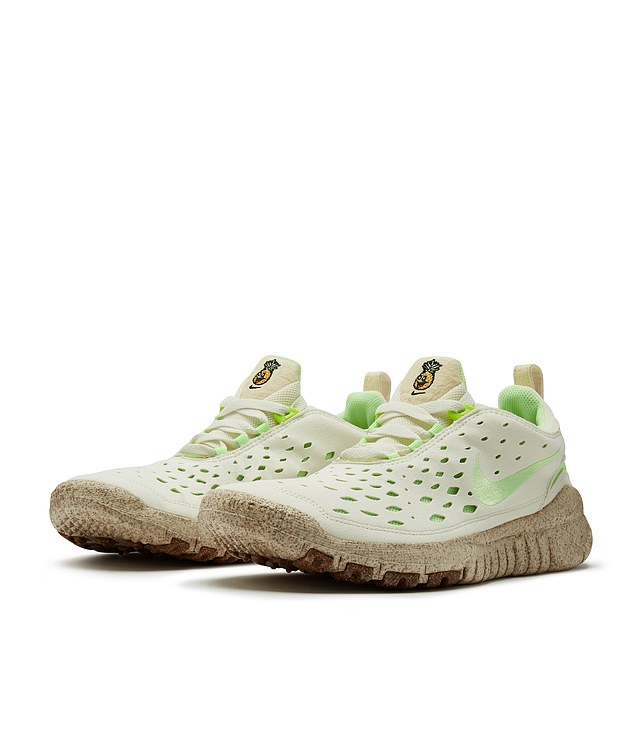 Other brands piling in to this already crowded field include Ananas Anam, which makes Pinatex fabric from waste pineapple fibres

A team of around two dozen scientists – including physicists and chemical biologists – are trying to perfect the formula for Mylo to make it even more hard-wearing.

Bolt Threads has created prototype mushroom trainers for Adidas, and eventually hopes to produce clothing made from the mycelium fibres, following the unveiling last year of a sample outfit of black corset top and trousers – which was modelled for McCartney by US actress and musician Paris Jackson.

Hermes, the maker of the Birkin and Kelly handbags, has closely followed the fungi-fabric trend. It is working with US firm MycoWorks to make its Victoria bag from another mushroom-based material, Reishi.

MycoWorks’ chief executive, Matt Scullin, says: ‘From the Stone Age and the Bronze Age to the Iron Age, great eras in human history have been described by a key material. We are in the early days of the Biomaterials Age… and MycoWorks and our partners are leading the new materials revolution.’

Other brands piling in to this already crowded field include Ananas Anam, which makes Pinatex fabric from waste pineapple fibres bought from farmers in the Philippines.

It has been used to make Paul Smith and £115 Nike trainers, upholster a chair by designer Tom Dixon, and decorate the Hilton hotel chain’s first-ever ‘vegan suite’, on London’s South Bank.

And eco-brand Pangaia, based in the capital, uses fibres from bananas, pineapples, bamboo and even nettles and seaweed as an alternative to cotton.

Next month, Stella McCartney plans to unveil a range of shoes and bags made partly from grape fibres, as well as the fruit skins and stalks discarded during winemaking. Fashionistas convinced that sustainable fashion is a good look will no doubt drink to that.