The story behind why immigrant children are being separated from their parents at the U.S. border

The separation of children from their parents at the southern U.S. border has drawn broad public outrage – but less talked about is a little-known lawsuit that has played a major role in making the Trump administration policy reality.

The history is complicated, and it goes back to 1997, when the federal government, under former President Bill Clinton, settled a lawsuit that dictated how unaccompanied minors must be treated while in U.S. custody.

The opposing parties in the case, Flores v. Reno, agreed on terms requiring that unaccompanied children held in federal custody be placed in ‘the least restrictive’ environment possible.

Central American migrant families and activists gathered at the border wall in April 29 for the March Without Borders at Friendship Park in Tijuana Mexico. Under the Trump administration immigrant children have been separated from their parents

The move drew criticism from immigrant rights activists, and a federal judge ruled in 2015 that the family centers were in violation of Flores v. Reno – even though the original settlement was intended only to apply to unaccompanied minors.

That legal standard is still in place, and it means that children cannot be held in detention centers for more than 72 hours – even if they are with their parents, said Leon Fresco, former deputy assistant attorney general in charge of the Office of Immigration under President Obama.

We never thought we would separate the parents and the children, but I warned … a different administration could.              -Leon Fresco, former Obama official

‘The only two choices for the current administration is to let people in who are seeking asylum – which this (Trump) administration doesn’t want to do – or separate parents from children,’ Fresco said.

The decision on Flores led the Obama administration to institute a policy of primarily releasing asylum seekers who were caught at the border with their children.

‘We (in the Obama administration) never thought we would separate the parents and the children,’ Fresco said. ‘But I warned at the time that a different administration could do that.’

The New York Times reported in April that roughly 700 children have been separated from their parents so far under the Trump administration. U.S. Customs and Border Patrol officials declined to comment for this story. 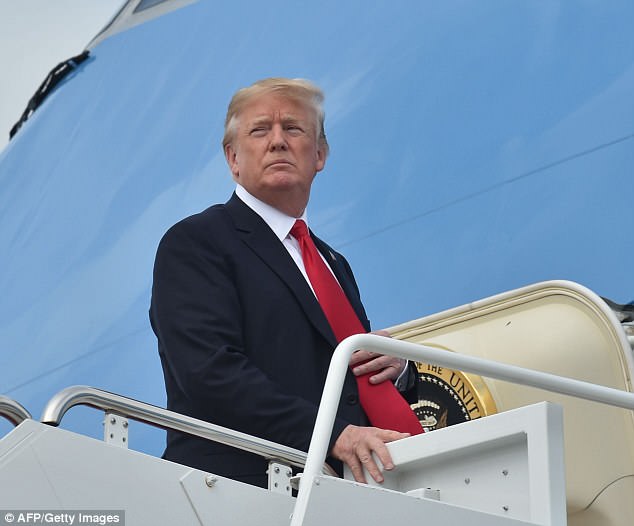 President Donald trump boards Air Force One at Andrews Air Force Base in Maryland on May 29. The administration’s policy of separating immigrant children from parents has drawn public outrage and sparked Twitter hashtags, including

But it was that Obama-era policy that encouraged parents to bring their children along for illegal border crossings in the first place, said Mark Krikorian, executive director of the Center for Immigration Studies, a Washington D.C.-based anti-immigration think tank.

‘It was Obama’s policy of letting anybody go who had a kid with them that created the expectation that it would work,’ he said.

Lawyers with the American Civil Liberties Union are in the midst of a lawsuit challenging the Trump administration’s policy of separating parents and children.

Lee Gelernt, deputy director of the ACLU’s Immigrants’ Rights Project, argued that there is a ‘third choice’ that should be legal regardless of the Flores settlement.

‘Flores is not supposed to override a parent’s choice and have their child sent to a strange facility,’ said Lee Gelernt, deputy director of the ACLU’s Immigrants’ Rights Project.

‘A mother needs to have the ability to decide whether sending an 18-month-old to a less restrictive facility is the best choice,’ he added.

Krikorian said that Trump’s policy to separate families is a byproduct of enforcing border laws.

‘The Democrats don’t have a solution that would fix all these problems,’ Krikorian added. ‘The Democrat’s solution would be to let everyone go, and that is not something the administration can responsibly do.’

While Democrats blame Trump for the policy, and Trump has pointed the finger at an unspecified Democratic law, Fresco said the Flores v. Reno settlement is a major, overlooked factor that led to the current situation.

‘Nobody wanted to get to the state of the affairs that we are at,’ he said. ‘No policy caused this to be where we are. This all happened because of a lawsuit.’

However, Gelernt said that the Trump administration has made the decision to go through with a ‘systematic’ and ‘unprecedented’ separation of children and parents in an effort to deter families from crossing the border.

‘We don’t believe it will deter asylum seekers,’ he added. 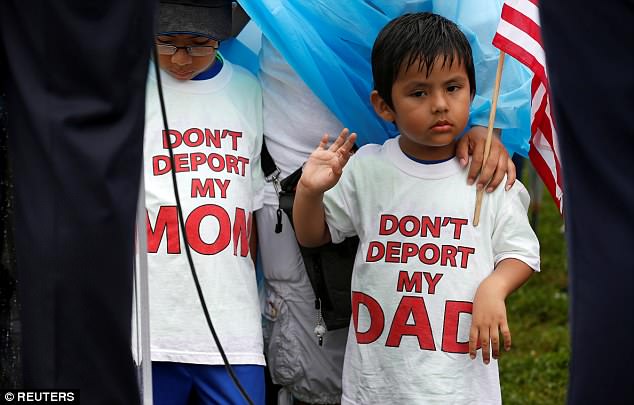 Boys wearing shirts calling for their parents not to be deported stand during an immigration rally in Washington D.C. in August 2017