The street where I grew up: Zandra Rhodes, 81, fashion and textile designer, shares memories

The street where I grew up: Zandra Rhodes, 81, fashion and textile designer, shares memories of Chatham Hill in Kent

I am a child of the Medway towns. Our house was one of four right on top of Chatham Hill, and I lived there with my parents and younger sister Beverley until I went to the Royal College of Art in London in 1961.

My handsome father Albert, who looked like Errol Flynn, was a lorry driver and my mother, Beatrice, was a teacher at Medway College of Design. She was an exceptional, exotic woman. Before the war she went to Paris and became a fitter in the famous fashion house of Worth. She came back when the war started, drove ambulances and made wedding dresses at home.

If Beverley and I were good and didn’t punch each other as we liked to do, we were allowed to watch her fit the dresses on the brides-to-be.

My mother was my inspiration and always encouraged me to believe in myself. Sadly, she died of lung cancer when I was 24, before she could see my career flourish. I still meet people today who say that, as a teacher, she was the most wonderful influence and led them to find jobs they loved.

My parents chose our house for the parquet flooring. They were champion ballroom dancers and they could practise on it. We had three bedrooms and a chilly upstairs bathroom.

It did have an electric bar heater, but it was set up so high it only heated your head. I remember winters with windows covered in ice on the inside and turning on the gas stove in the kitchen and sitting with our feet in the oven. Happy days.

The views at the back of the house across the North Downs were fantastic. But, oddly, my father built a garden shed right outside the kitchen window which completely blocked the view into the garden.

My mother cooked at weekends and we would often have chicken or rabbit – my father bred both at the bottom of the garden. He grew vegetables and flowers too, mostly dahlias, which he loved. We had a rock garden, a flat lawn and then the garden became very steep, reaching down towards chalk cliffs, a farm below and that incredible view.

The front of the house was a whole other story. The road was busy all day. It was the A2 – the main road into London – with traffic all night as lorries made their way to the Covent Garden markets. There was no way you could play in the street, but I quite liked the bustling scene and can remember sitting on our garden fence when the war ended watching the tanks coming home in a convoy. 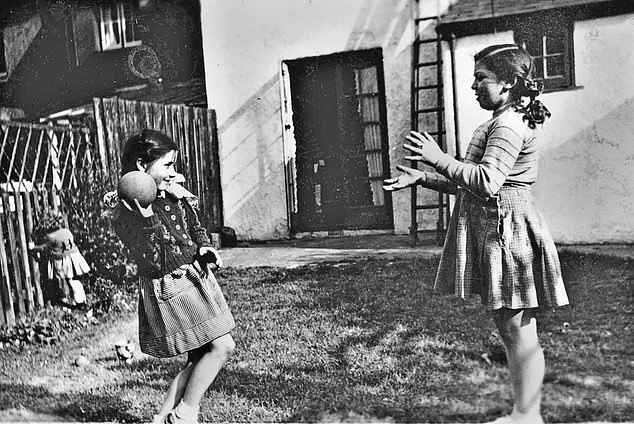 Zandra (right) in her back garden with her younger sister Beverley

My parents would take us walking on the Downs, and we’d pass a long row of Romany caravans. They were resplendent with colourful decorations, which I loved to draw. As a child I listened to The Archers on the radio, but we didn’t have a TV until I was 17.

When the set arrived my father sat and watched cowboy shows like Bonanza – I’d sit in the corner drawing plants.

My primary school in Byron Road was ten minutes’ walk away, and the church where David Frost’s father was vicar was in the same road. David was about 18 months older than me, but I remember him. He was distinctive in his purple school uniform.

After my mother died my father remarried and was very happy with his second wife. I found out later that my parents weren’t truly happy together. It was a mismatch in many ways, but there were no dramas at home. All was hidden from us.