These are the electrifying winners and finalists in the inaugural Storm Photos of the Year competition – and they show some of 2020’s wildest weather.

There were two categories in the contest, Photographer of the Year and Photo of the Year, with entries pouring in from around the world, from the bright lights of Manhattan to the wilds of Australia.

U.S storm chaser Scott Peake won the Photo of the Year category with a stunning shot snapped near Ashby in Minnesota of a ferocious tornado at the end of a rainbow.

Meanwhile, Tim Baca from New Mexico claimed the Photographer of the Year award with a portfolio that judges deemed had ‘a variety of compositions with subtle editing and great foregrounds’.

Mike Olbinski, an Emmy-award winning photographer and filmmaker who founded the Storm Photos of the Year contest, said that despite the challenging circumstances of 2020, the ‘submissions were mind-blowing nonetheless [with] some absolutely insane captures, from close-range lightning bolts, stunning compositions and the raw power of tornadoes’. Twist your way down to see the cream of the crop…

This image taken by Scott Peake near Ashby in Minnesota claimed first place in the Photo of the Year category. It shows a tornado at the end of a rainbow that crosses a long road. You can make out the tornado’s path from right to left as it has pulled crops from the fields 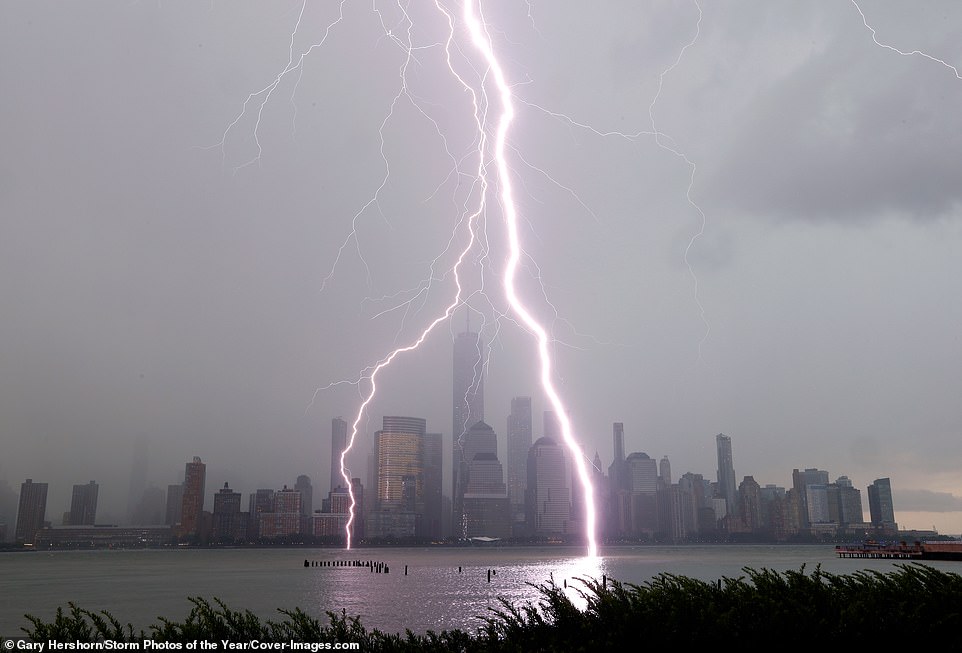 Two intense lightning bolts land in the Hudson River with Manhattan in the background. The striking image was taken by Gary Hershorn, a finalist in the photo of the year category, from the shores of Jersey City. The judges applauded the photographer for his rare capture of ‘upward lightning’, which can be seen on the brighter right strike emanating from the water 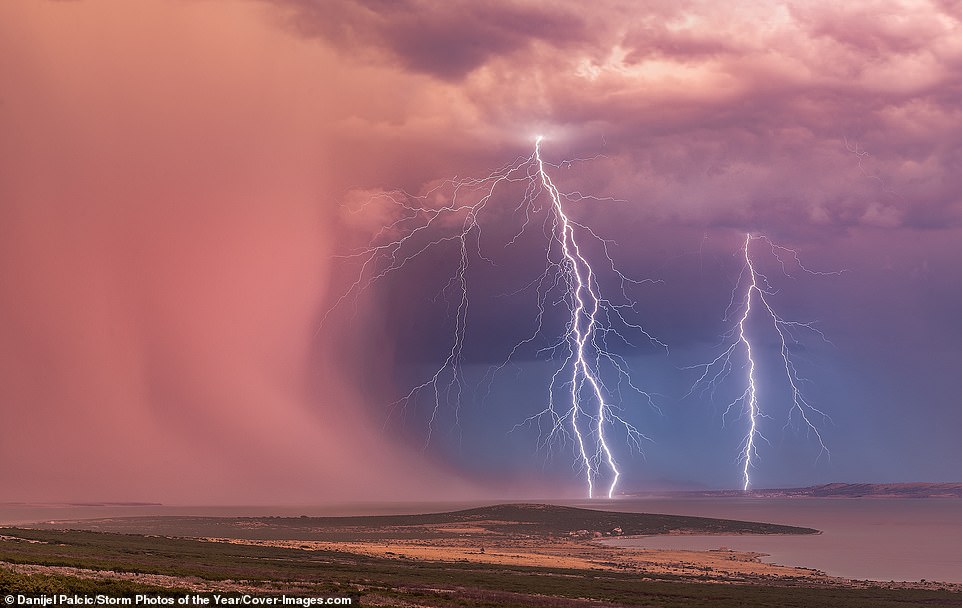 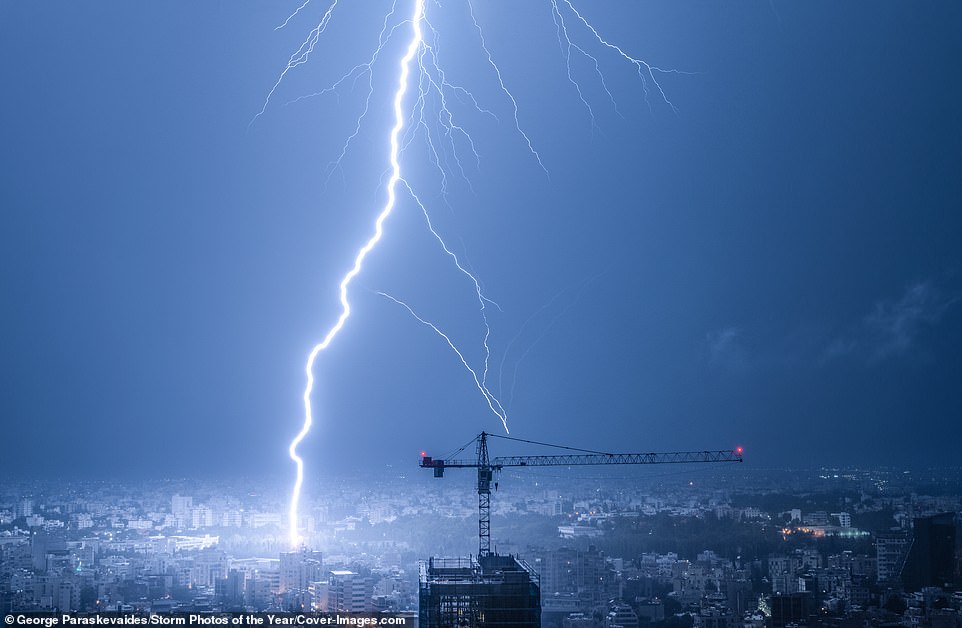 George Paraskevaides captured this powerful lightning bolt hitting Nicosia in Cyprus, illuminating the whole city. The image was a finalist in the photo of the year category 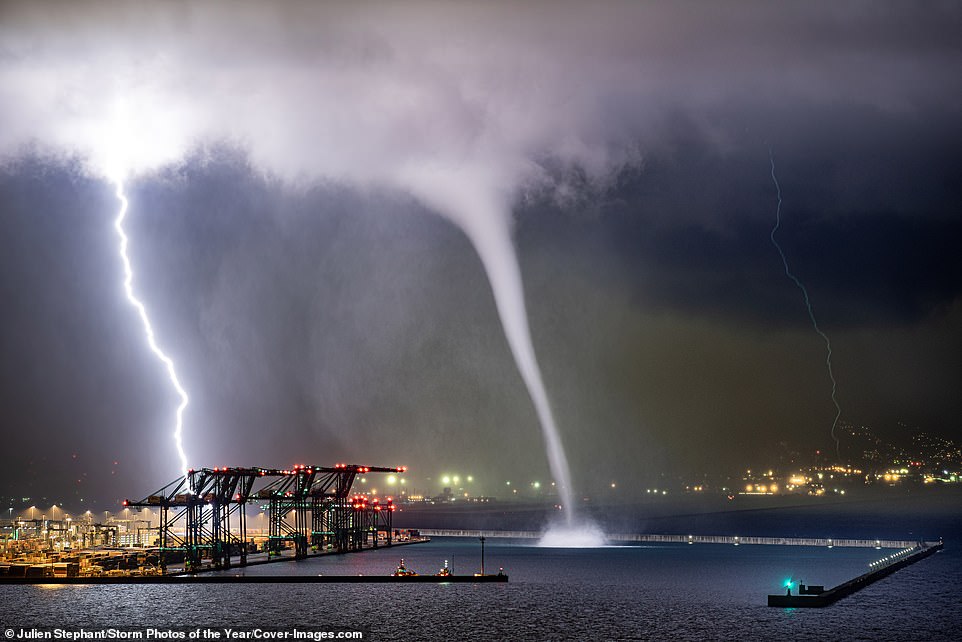 Julien Stephant took this electrifying image, which was a finalist in the photo of the year category, in Genoa, Italy. It shows a ‘waterspout tornado’ moving towards an industrial port with bolts of lightning adding to the atmospheric scene 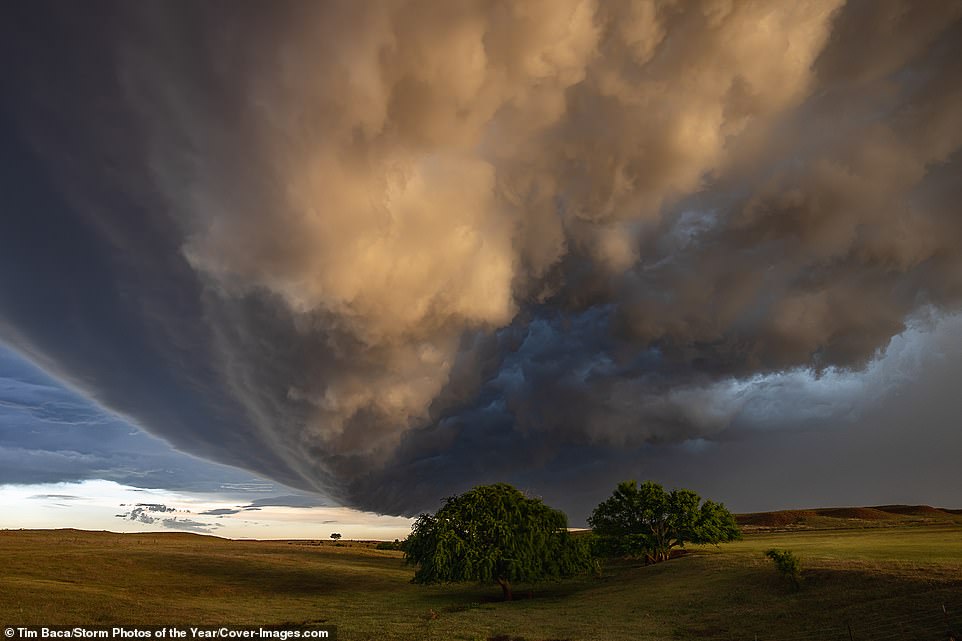 Tim Baca won the Photographer of the Year award with his portfolio that judges said had ‘a variety of compositions with subtle editing and great foregrounds’. The menacing image above was snapped by Tim in the countryside west of New Cordell in Oklahoma 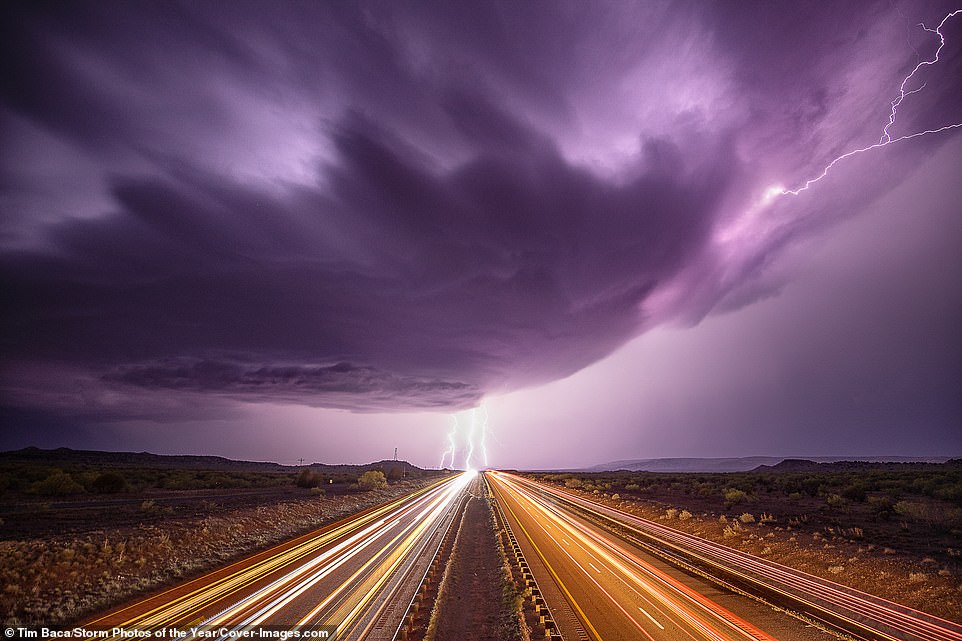 This incredible image captures high-speed motion on a highway in Cuervo, New Mexico, with flashes of lightning illuminating the sky beyond. The photo was taken by Photographer of the Year Tim Baca. The judges said of his work: ‘Storm chasing and photographing on the fly can be difficult, but Tim managed to find gorgeous locations to place in front of some epic storms’ 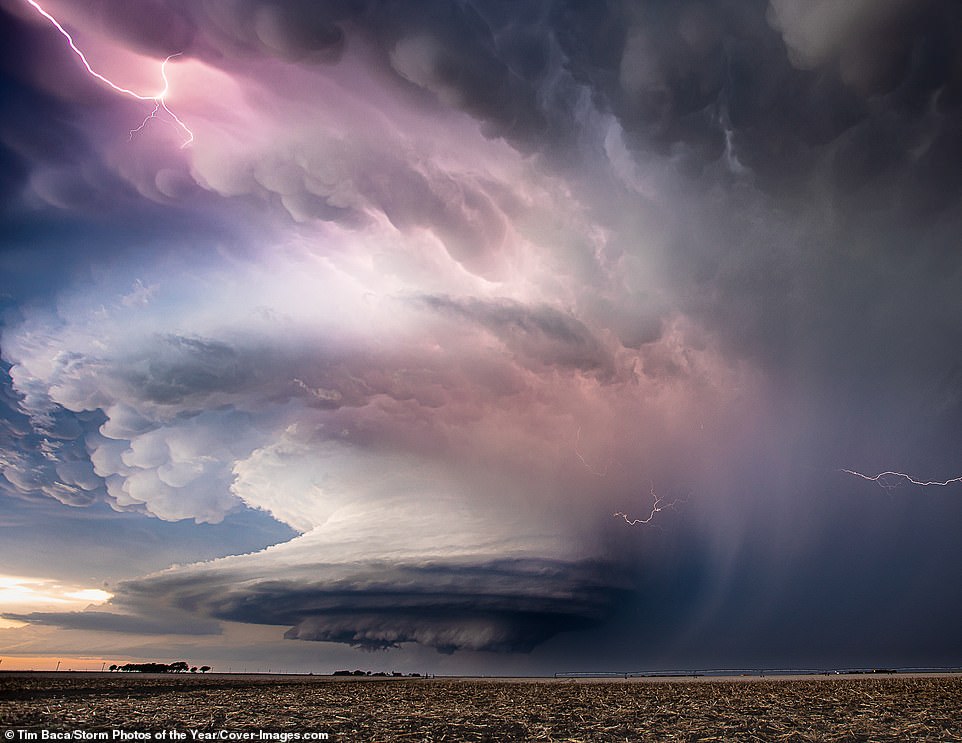 A storm brews over Sublette, Kansas, with thunderous shades painting the sky and clouds swirling. The unique formation was captured by Photographer of the Year Tim Baca 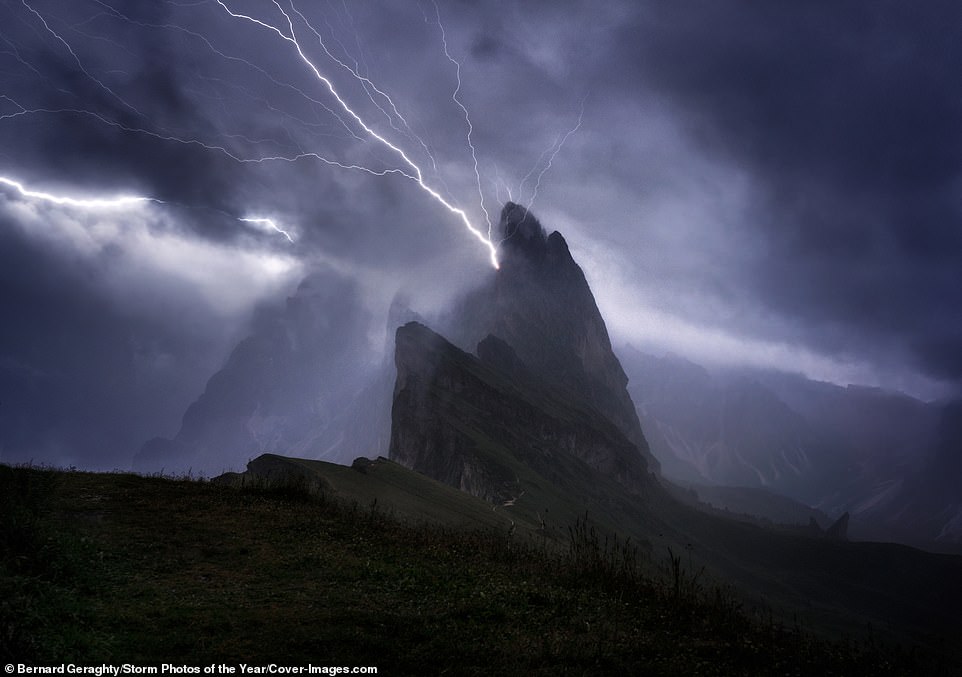 A rare upward lightning strike races up from the Seceda mountain in the Italian Dolomites. It saw photographer Bernard Geraghty make it as a finalist in the photo of the year category 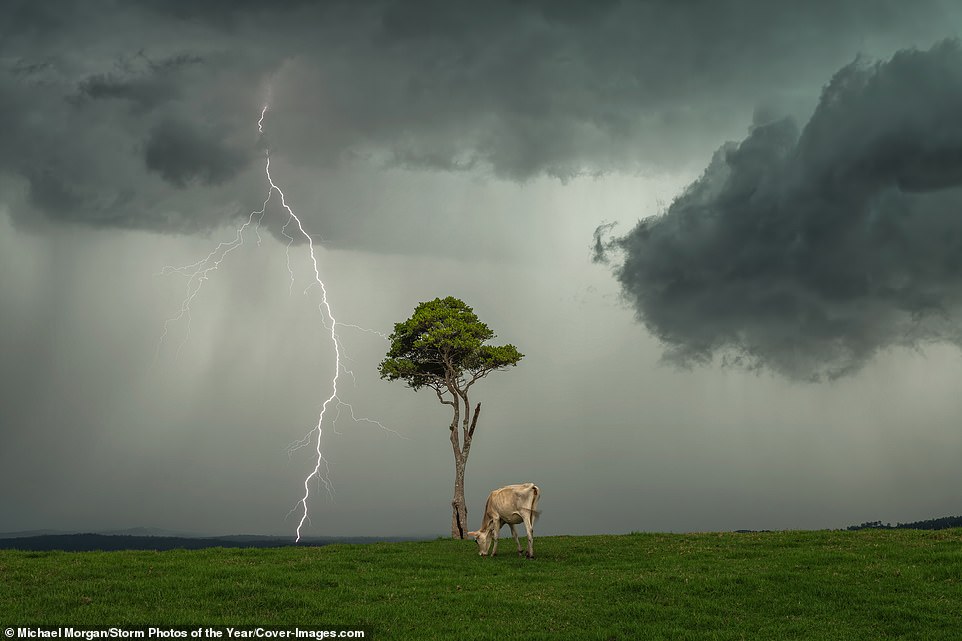 This mesmerising image was taken by Michael Morgan outside the rural town of Maleny in Australia. It took second place in the photo of the year category. It was praised by the judges for being more like a ‘fine art photograph’ with a ‘beautiful composition of a lone tree, a grazing cow and a distant lightning bolt against a stormy sky’ 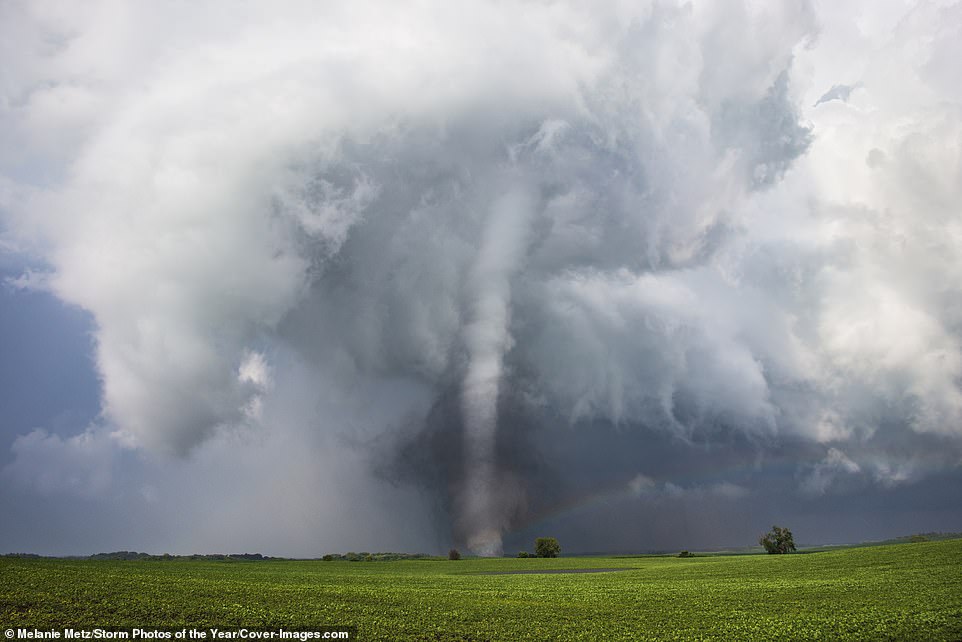 Melanie Metz captured this rare scene of both a tornado and a rainbow. She shot the image in Dalton, Minnesota, and it was a finalist in the photo of the year category 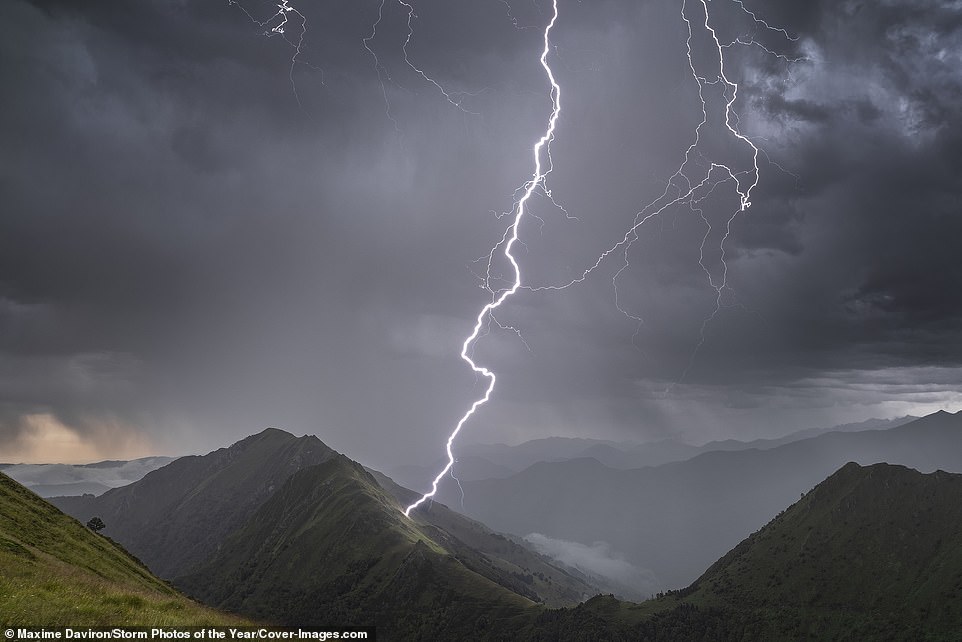