The stroke revolution that will save millions

Every five minutes in Britain, someone will suffer a stroke. They can affect people of all ages: one in four people who have a stroke are of working age and they strike more than 400 children each year.

Thirty years ago, treatment was scarce. If you suffered a stroke, you’d be lucky to survive the week, and even luckier if you still retained the full use of your brain and body.

One thrombectomy patient, Natalie Burns, recovered from a potentially devastating stroke with almost no long-term effects. The mother-of-two from Fareham, Hampshire – a manager in a healthcare technology company – was a fit and healthy 37-year-old when she was struck down in September 2017

High-tech ambulances with the latest cutting-edge equipment swoop in within minutes, world-leading specialist centres are now dotted across the country and doctors have a growing arsenal of treatments at their disposal.

It all means that recovery is often dramatic, sparing patients years of physiotherapy. But things can still improve.

Though healthier lifestyles and the widespread prescription of pills for high blood pressure and cholesterol have reduced the number of strokes by 40 per cent in just 15 years, one in five still dies after a stroke, and half of the 1.2 million stroke survivors living in the UK suffer some form of disability.

As NHS England prepares to publish new strategies early next year to prevent and treat stroke, we speak to Britain’s top doctors and researchers about the extraordinary revolution in stroke care.

Most strokes are ischaemic – caused by a clot that blocks blood flow to the brain – while other rarer events are caused by a burst blood vessel, known as a haemorrhage.

Both cause brain cells to die because they are starved of oxygen and nutrients, which leads to lifelong disability, including full or partial paralysis, speech and memory problems. Until relatively recently if patients did survive, the result was often catastrophic.

The revolution began in the mid-1990s, with the advent of clot-busting drugs injected into the veins, in a process called thrombolysis, that proved stroke could be treated.

If administered within four hours of the onset of symptoms, patients have been shown to be 30 per cent more likely to have minimal or no disability after three months.

Today, every hospital in England that admits stroke patients provides thrombolysis, but there has since been an even more dramatic development. A procedure known as thrombectomy has produced astonishing results since its introduction in 2013. If administered within six hours of symptoms beginning, half of patients will be left with little or no disability.

The treatment involves inserting a stent – a tiny tube-like wire mesh cage – into an artery in the patient’s groin. It is threaded up through the blood vessels on the end of a 3ft wire until it reaches the clot.

Once in position, the stent grabs the clot and when the device is pulled out, the clot comes with it.

Stroke consultant Girish Muddegowda, at the Royal Stoke University Hospital, one of the leading centres in Britain carrying out the life-changing procedure, said: ‘The speed of recovery is so dramatic.

‘Most of our thrombectomy patients are able to walk out of the hospital in three or four days. In the past, most of them would end up in a nursing home.’

One thrombectomy patient, Natalie Burns, recovered from a potentially devastating stroke with almost no long-term effects. 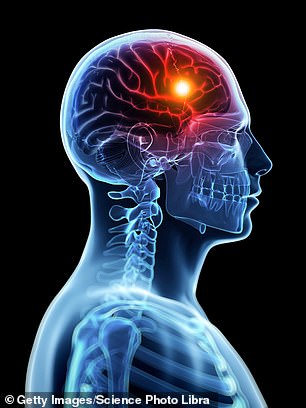 Every five minutes in Britain, someone will suffer a stroke. They can affect people of all ages: one in four people who have a stroke are of working age and they strike more than 400 children each year

The mother-of-two from Fareham, Hampshire – a manager in a healthcare technology company – was a fit and healthy 37-year-old when she was struck down in September 2017. Having felt a nagging pain in her calf one night, the following morning she collapsed on the living room sofa.

‘I lost use of the right side of my body,’ Natalie recalls. ‘My eye was drooping and my arm and leg were floppy and I couldn’t speak.’

She was rushed to Queen Alexandra Hospital in Portsmouth, where she was initially given thrombolysis. ‘I was shown pictures of things like helicopters and even though I knew what they were, I couldn’t say what they were.’

As parts of the brain die, so does the ability to move parts of the body and speak – both early warning signs of a stroke. ‘The words just wouldn’t come out of my mouth, which was really frightening,’ Natalie adds.

Scans confirmed that she had three clots blocking arteries to her brain. It meant a rush for a lifesaving thrombectomy at the nearby Southampton General Hospital. It was so effective that Natalie was discharged just two days after her stroke. Her speech started to improve each day, and three weeks on was close to normal. Now, just over a year later, despite an occasional lapse when she is tired, she has recovered completely.

NHS England agreed to start funding thrombectomy procedures in April 2017, and 708 were carried out in its first year, significantly below the 1,000 target.

Part of the problem for patients is the availability of specialist doctors – only 24 hospitals across England are currently able to offer it.

Of those, just two – St George’s in London and the Royal Stoke – can provide the service 24/7. Two more London centres, at University College London Hospital and Charing Cross Hospital, will begin 24-hour provision in the next few months. In Scotland, no hospitals offer thrombectomy. The NHS is determined to increase access for the estimated 9,000 patients every year who could benefit and NHS England has about £100 million set aside to do that.

Professor Tony Rudd, NHS England’s National Clinical Director for Stroke, explained: ‘We’re hoping to get it to 1,000 patients this year, which is fewer than we’d planned for the second year. In five years, we’re hoping we’ll extend it to ten per cent of stroke patients – 8,000 a year in England.’

New guidance on stroke care from the National Institute for Health and Care Excellence (NICE), currently under consultation, recommends thrombectomy as well as thrombolysis for some patients up to 24 hours after the onset of their stroke symptoms, rather than just six, which could make it effective for thousands more.

However, NICE said: ‘Rapid treatment is important… the percentage that can be expected to be independent declines from 50 per cent for thrombectomy within three hours to 40 per cent at six hours and to 33 per cent by eight hours.’ But Dr Muddegowda said: ‘Before we had thrombectomies, these patients had a 54 per cent chance of dying over the next year – now it’s one in ten.’

Another new solution … in an arthritis drug

Although thrombectomy is transforming outcomes of those who suffer blood clot-related strokes, British research is poised to revolutionise treatment for the less common form of stroke.

Haemorrhagic strokes – caused by a bleed in and around the brain, linked to a burst blood vessel – account for up to 15 per cent of all strokes and can be more serious than those caused by a clot. One in ten die before reaching hospital, and half die within a few days.

For those who survive, recovery is slow – only 12 per cent regain most of their ability to function normally within 30 days. Long-term effects vary but can involve paralysis, speech problems, incontinence and cognitive issues. So far, there have been few treatments other than medication to lower blood pressure and surgery to drain blood away from the brain. Now scientists from the University of Manchester have discovered an arthritis drug may provide a highly effective treatment.

The studies showed the drug cut the damage caused by a stroke by one third, and two significant trials are now set to go ahead to see if the results can be replicated. The drug, anakinra (also known by the brand name Kineret) blocks the production of a protein in the body, IL-1, which is released in response to injury. In stroke patients, IL-1 restricts blood flow to the brain and blood vessels. By blocking this mechanism, the drug could limit the amount of damage caused.

Early results from trials in which stroke patients are given the drug, suggest it is safe for both haemorrhagic and ischaemic cases and can reduce harmful inflammation.

It could even be given to patients in ambulances on the way to hospital. The hope is that the drug will improve quality of life and reduce disability following stroke.

Mrs Langley, now 70, from Manchester, was going to bed one night when she was struck by ‘the headache from hell’.

She was rushed to Salford Royal Hospital where scans showed she’d had a type of haemorrhagic stroke called a subarachnoid stroke – where there is bleeding on the surface of the brain.

She had emergency surgery and was given a drug called nimodipine to prevent narrowing of the arteries that supplying the brain.

She was also one of almost 140 patients who took part in a trial of Kineret. Half were given jabs of the drug twice a day for up to three weeks, while the others were treated as normal.

The results, published earlier this year, showed the drug cut inflammation and was safe to take, paving the way for a UK-wide trial, of up to 1,000 patients at 20 hospitals.

Four years on from her stroke, Mrs Langley has made a complete recovery and swims, runs and coaches children in tennis.

‘I feel lucky every day. I know people who have had similar things happen to them and haven’t had such a happy outcome.’