The stunning 2018 winners of the acclaimed Siena International Photo Awards

If your photograph is commended or a winner in the Siena International Photo Awards it’s certainly significant – because it’s enormously popular.

This year a staggering 48,000 people entered.

And the standard is very high – the competition attracts entries from photographers who are at the peak of their powers.

The images that wowed the jury this year include a leopard seal on the brink of eating a penguin, lightning ripping through a huge volcanic eruption in Chile, a car lost in a sea of sheep on a Polish road and a chameleon’s tongue en route to an unsuspecting dragonfly.

If you want to enter the competition in 2019 visit sipacontest.com. Meanwhile, for some inspiration, scroll down to see the very best of this year’s entries…

The winning image in the ‘animals in their environment’ category is this incredible shot of a leopard seal trying to eat a penguin. It was snapped by American photographer Amos Nachoum off Pleneau Island in the Antarctic peninsula. He said: ‘The seal was hiding, waiting to ambush young penguins as they got closer. When a penguin got close enough, the seal moved extremely fast and caught the penguin by its feet dragging it to the open water. I was following parallel to the action. The seal released the penguin twice and the terrified penguin succeeded in escaping, but the seal continued chasing after it, and on the third attempt, drowned the penguin and devoured it’ 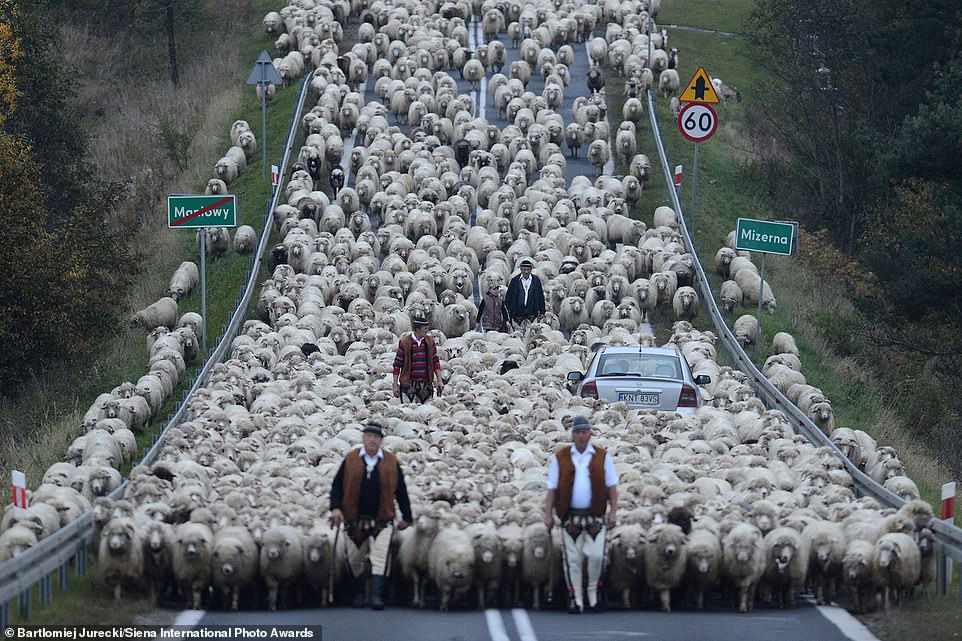 Polish photographer Bartlomiej Jurecki captured this image of traditional sheep grazing called ‘Redyk’, which takes place in Mizerna in southern Poland and involves more than 1,500 animals. He said: ‘From the Low Beskid Mountains, shepherds bring back the animals to the city of Nowy Targ, where the owners will take care of them during the winter. The animals will go back to the mountains in spring.’ The image was highly commended by the judges 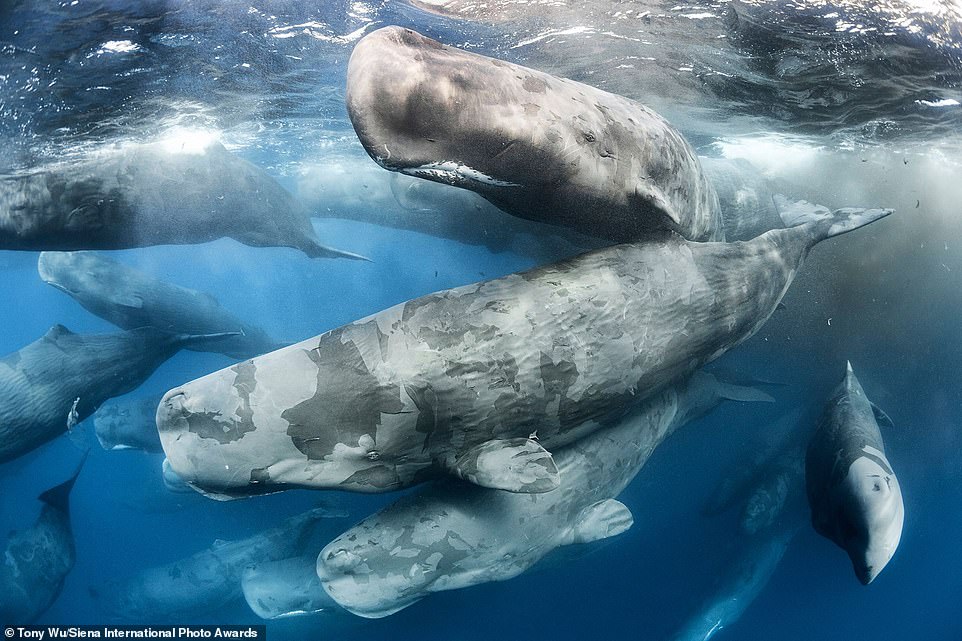 This jaw-dropping photo of a group of sperm whales was snapped by Tony Wu while in Sri Lanka. He said: ‘The sperm whales pictured here had just emerged from milling around in a gigantic cluster, with many of the whales defecating to such an extent that the water was opaque with secretions. This scene was part of a large, multi-day aggregation comprising hundreds, perhaps thousands of whales.’ Mr Wu won third place in the animals in their environment category for this image 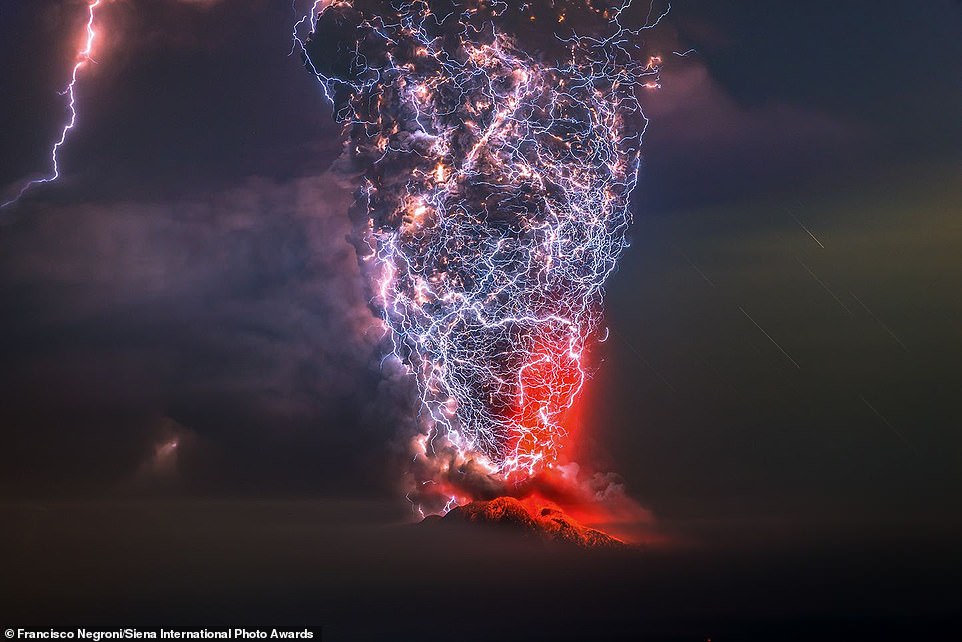 The winning image in the ‘beauty of nature’ category shows lightning ripping through a volcanic eruption. It was snapped by Francisco Negroni from Chile. He said: ‘This photograph was taken during a violent night eruption of the Calbuco volcano in the Lagos region, Chile. An incredible dirt storm wraps the fumarole of the erupting volcano’ 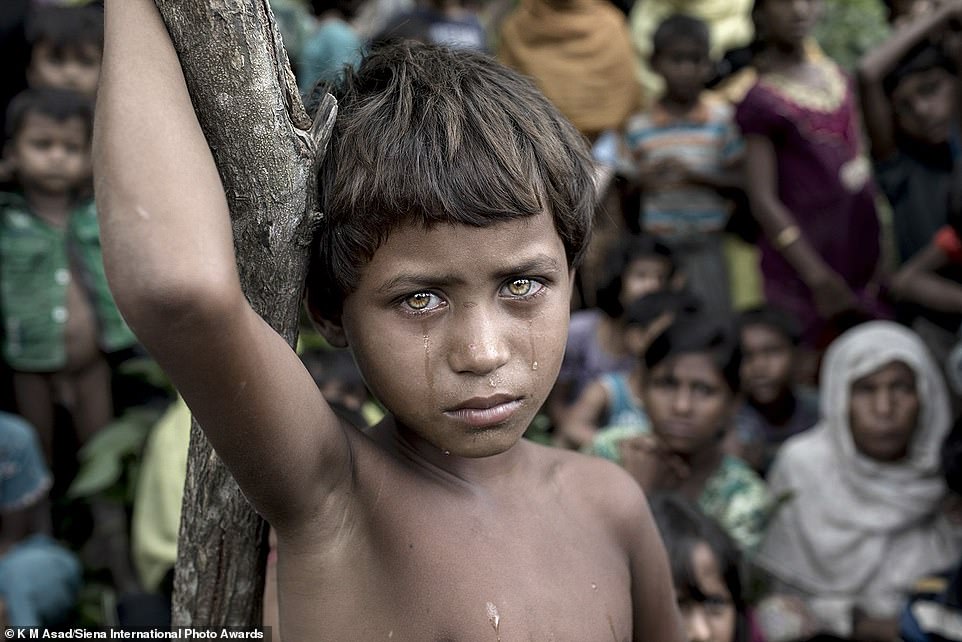 The overall winning image of the competition is this emotive shot taken in 2017 by photographer KM Asad in Bangladesh. It shows Asmat Ara, a refugee from Myanmar who looks traumatised after witnessing the violence that had taken place there. The previous night she had entered Tenkhali Rohingya refugee camp with her family from Kumar Khali in Rohingya state. According to the UNHCR, more than 646,000 Rohingya refugees have fled from Myanmar since August 2017, most of them trying to cross the border to reach Bangladesh 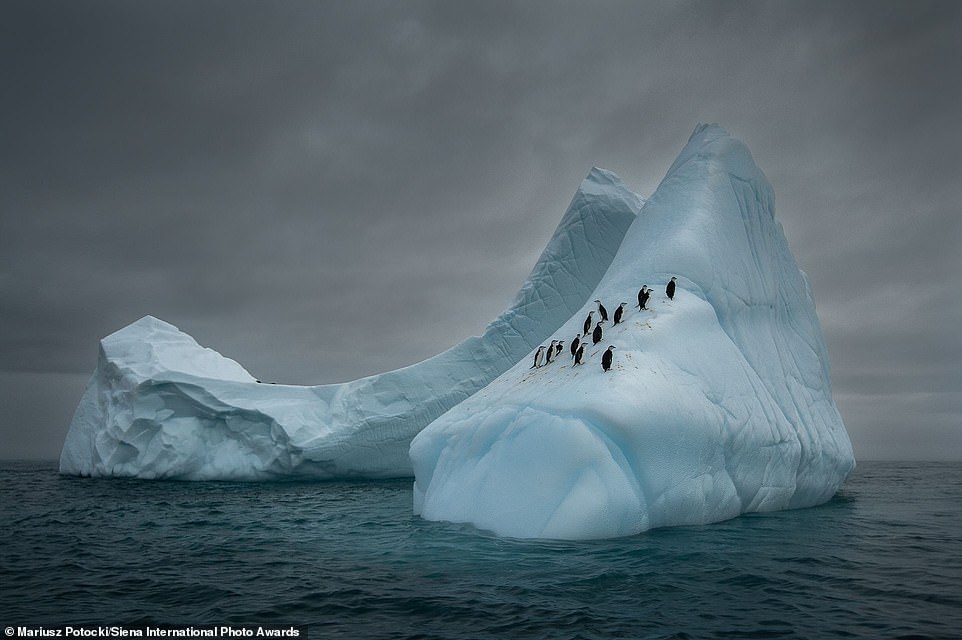 American photographer Mariusz Potocki captured this charming image of chinstrap penguins resting on an iceberg in the Bransfield Strait in Antarctica. He said: ‘When sailing Antarctic waters you will often see different types of icebergs. Some of these floating islands are great resting places for hunting penguins who can travel many kilometers, before jumping back into the icy water’ 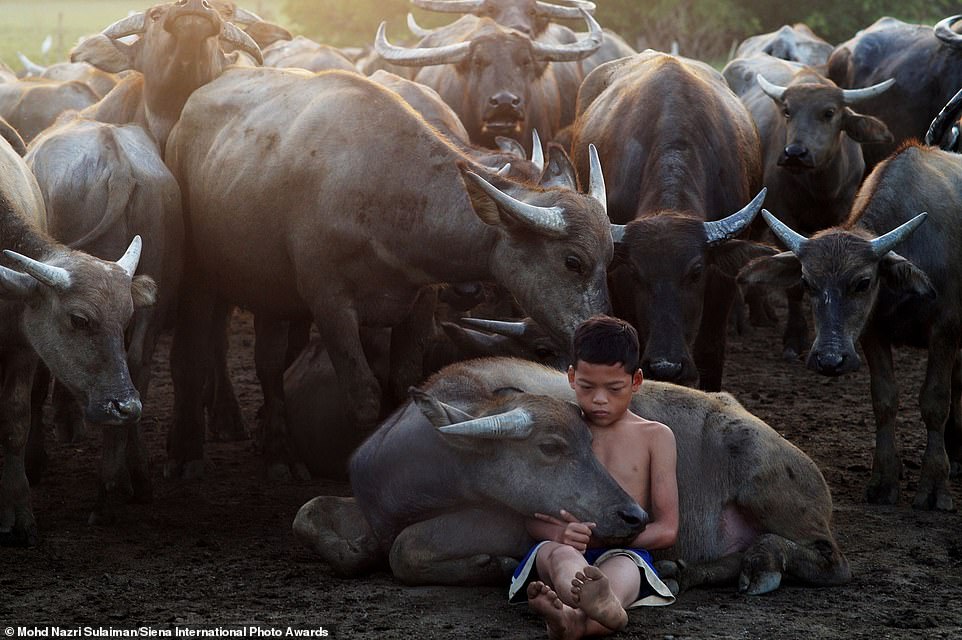 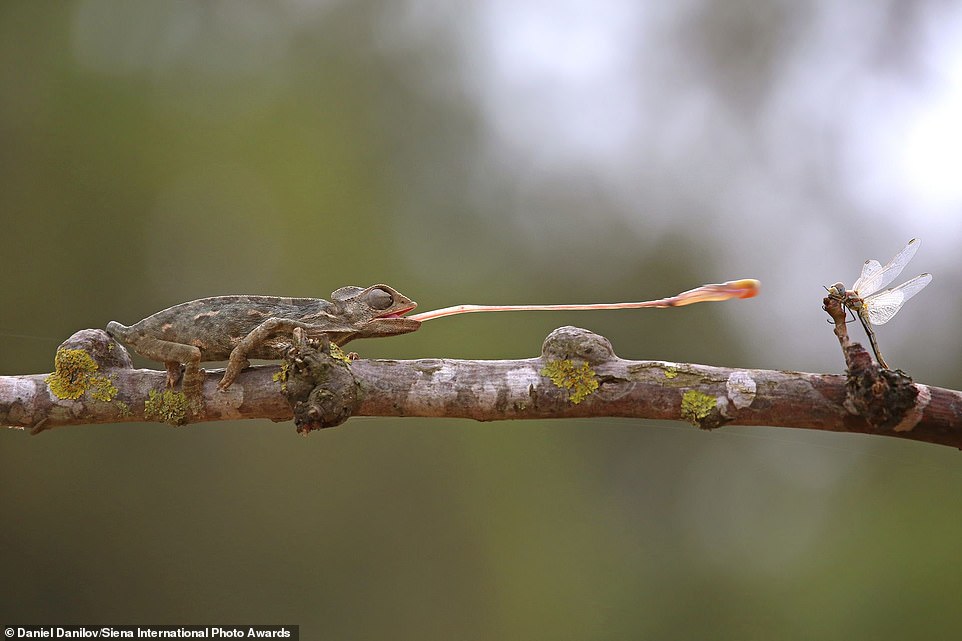 This dramatic image shows a chameleon whipping out its tongue to capture a dragonfly. It was snapped in Netanya Forest in Israel by photographer Daniel Danilov, who earned an honourable mention in the ‘beauty of nature category’. He said: ‘I was hiding behind a bush in order not to disturb the scene. Its tongue is longer than its body, and its tip is sticky and thick’ 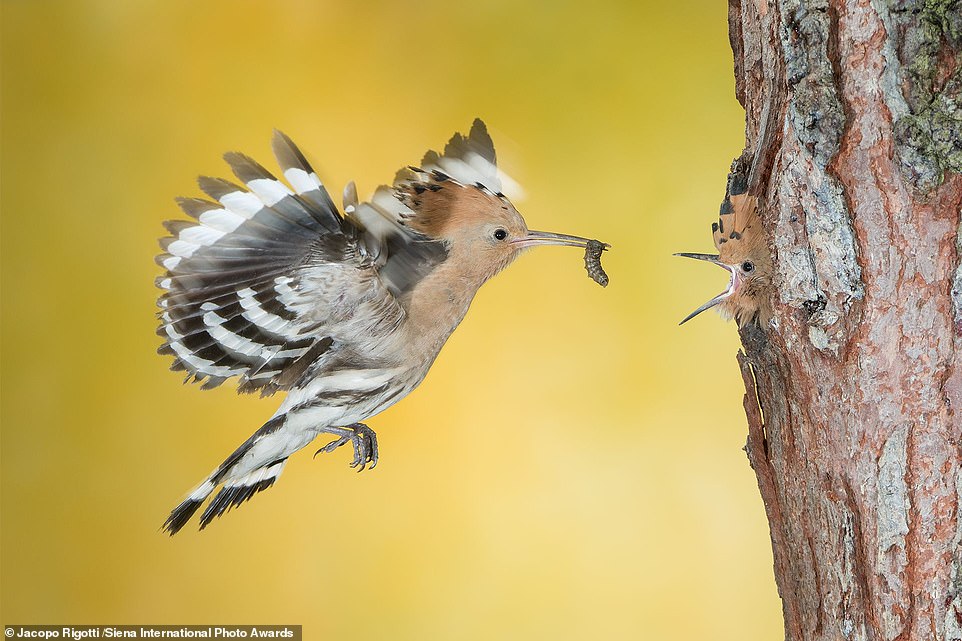 This heartwarming image of a pair of hoopoe birds was snapped by Jacopo Rigotti in Trentino, Italy. He said: ‘Looking, as usual, for the nests of the most beautiful bird species in Trentino, I unexpectedly saw this hoopoe and I immediately grasped the opportunity to photograph it.’ The image bestowed upon Mr Rigotti an ‘honourable mention’ in the animals in their environment category 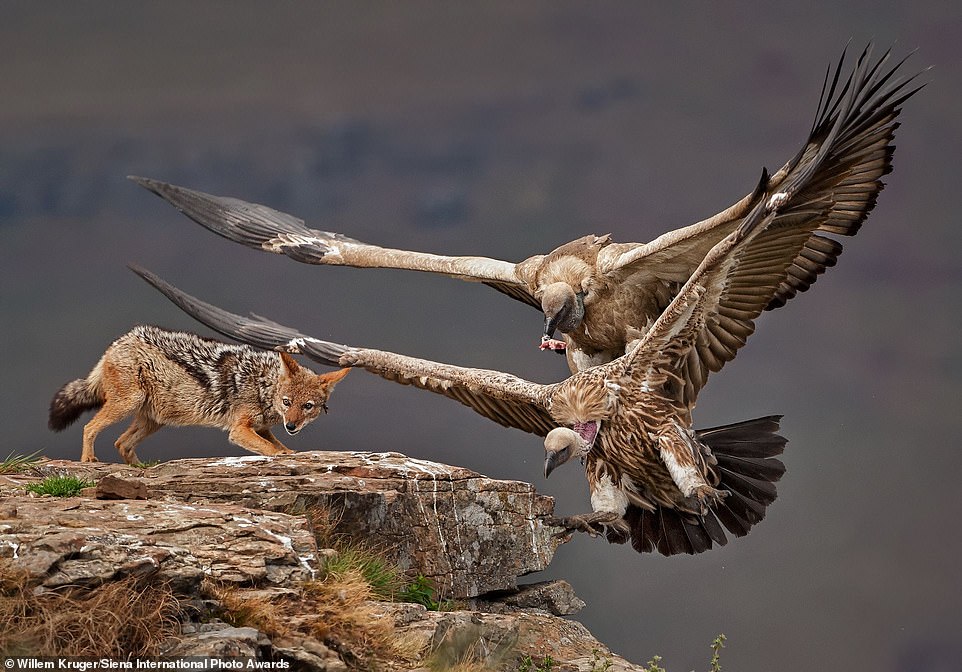 A pair of vultures and a jackal on the hunt for their prey inside Kruger National Park in South Africa. The shot, taken by Willem Kruger, won a Remarkable Award in the photo contest 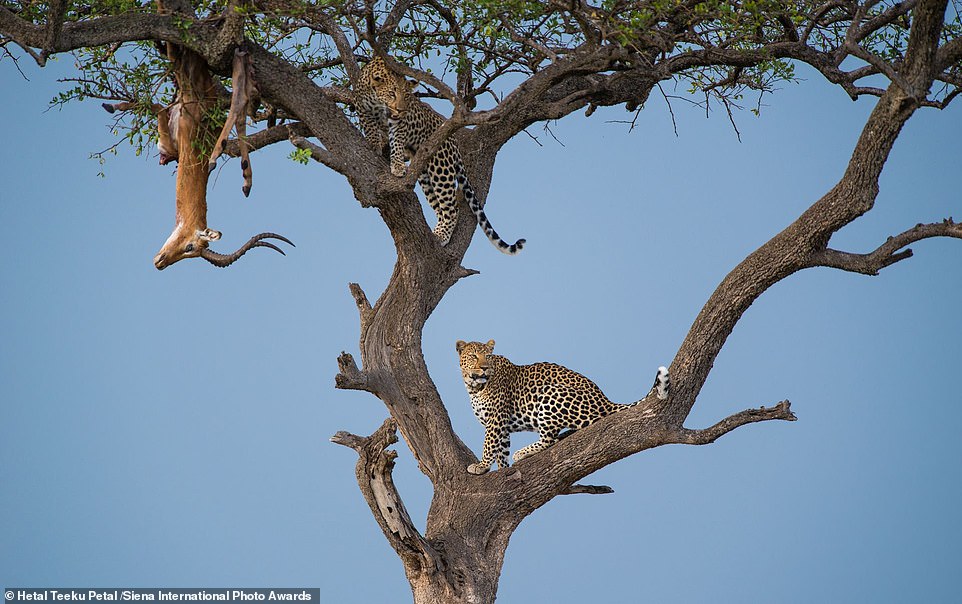 A pair of leopards keep their kill high up in a tree away from scavengers in Kenya. The shot by Hetal Teeku Petal won a Remarkable Award in the contest 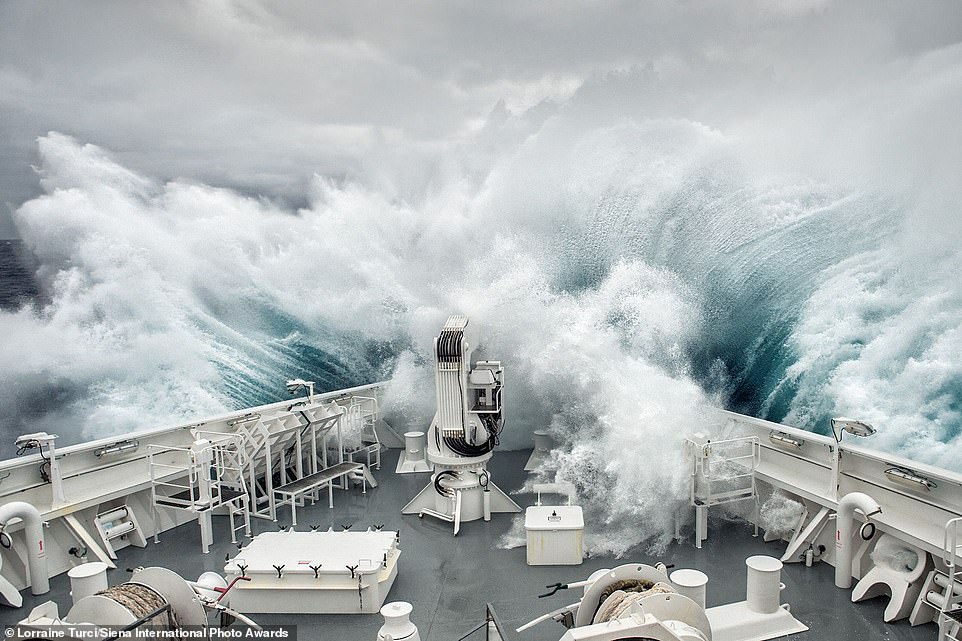 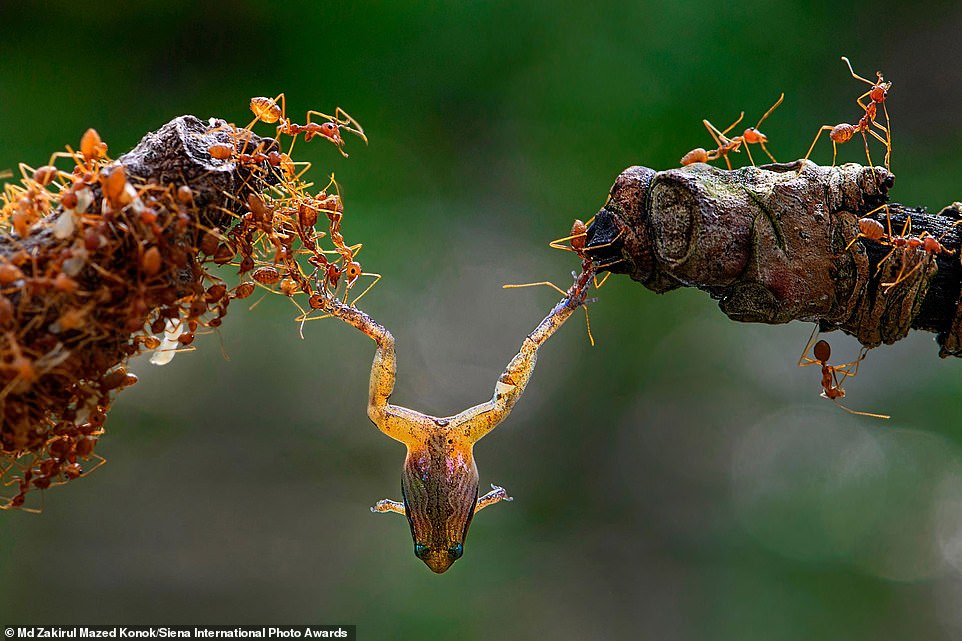 Photographer Md Zakirul Mazed Konok gained an honourable mention for this shot showing a frog trying to eat ants in Bangladesh. He said: ‘Unity is the strength, as with teamwork and collaboration with which wonderful things can be achieved. Here this frog wanted to eat the ants, but its own life is at risk in the face of their unity’ 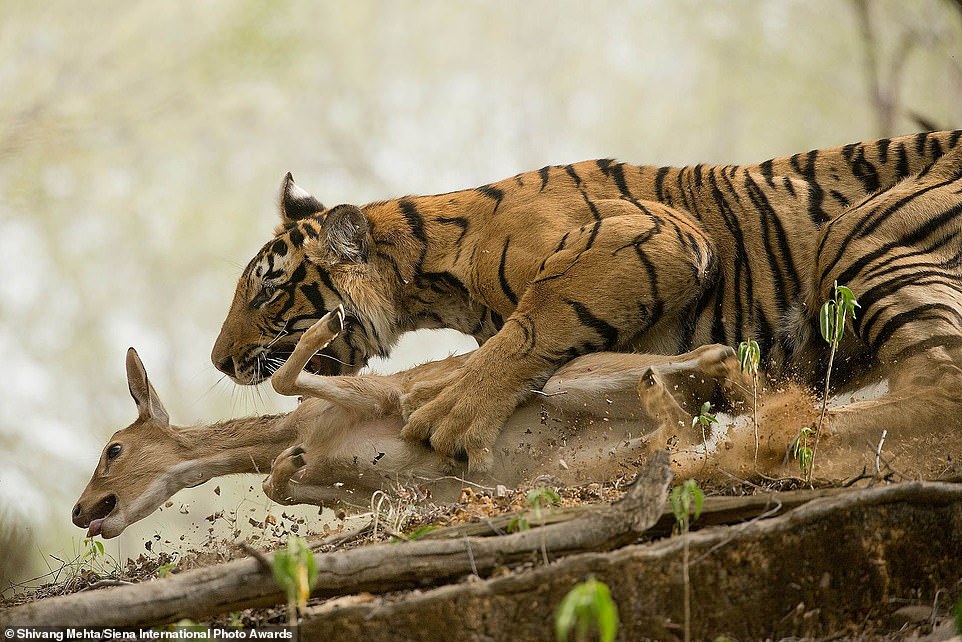 Indian photographer Shivang Mehta won second place in the animals in their environment category for this image showing a tiger cub pouncing on a deer in Ranthambore National Park in India. He said: ‘I captured the moment when the tiger cub was struggling to get the prey down, as his siblings and mother were watching from a distance’ 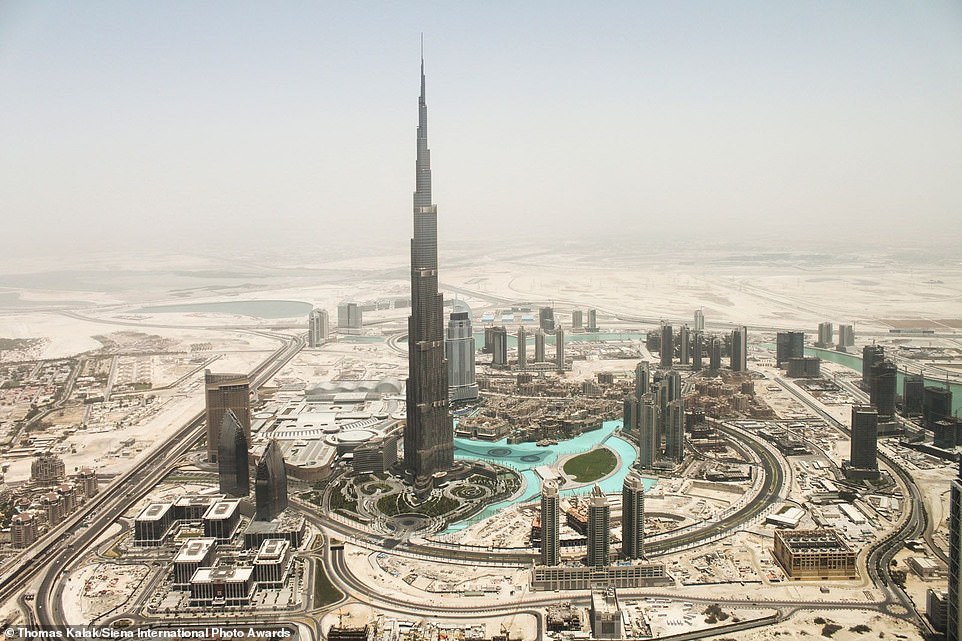 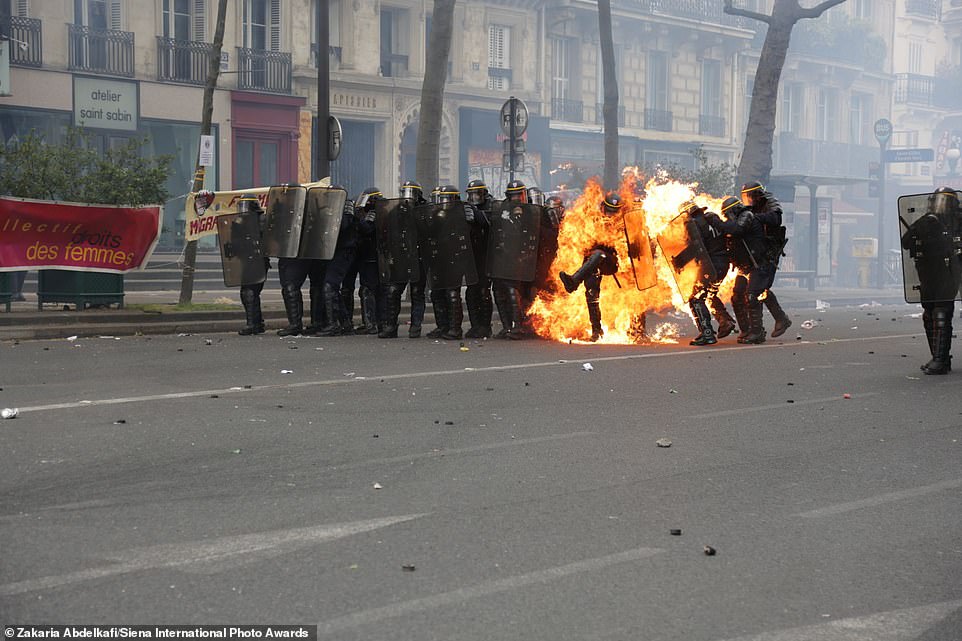 Photographer Zakaria Abdelkafi snapped this dramatic image of an anti-riot police officer engulfed in flames after being hit by a Molotov cocktail during violence in Paris. Mr Abdelkafi said he had no idea that the riot would end with the police officer being badly burned 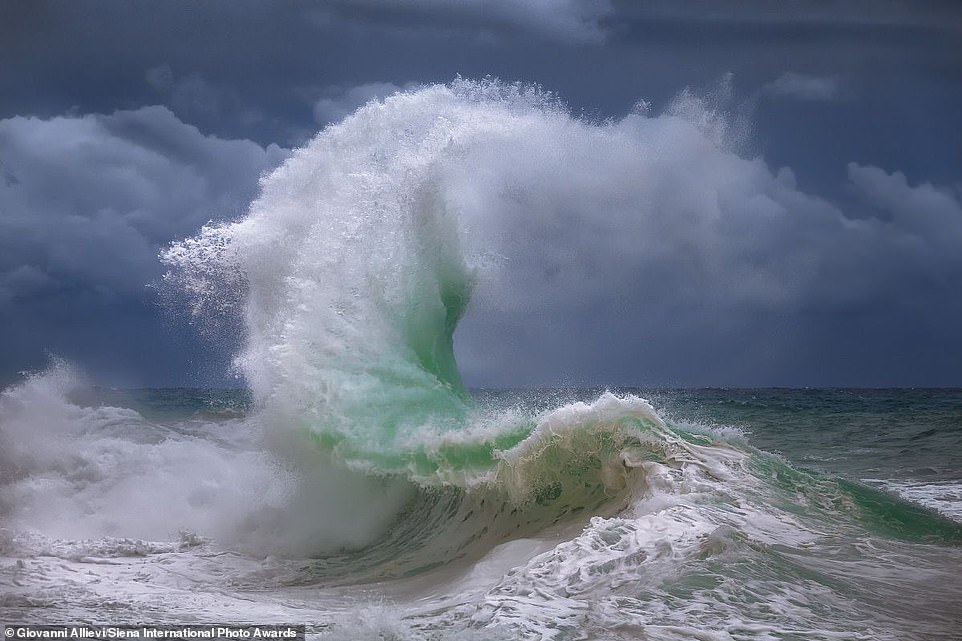 Photogrpaher Giovanni Allievi shot this stunning image of a crashing wave off Varigotti beach in northern Italy. It won a Remarkable Award in the beauty of nature category 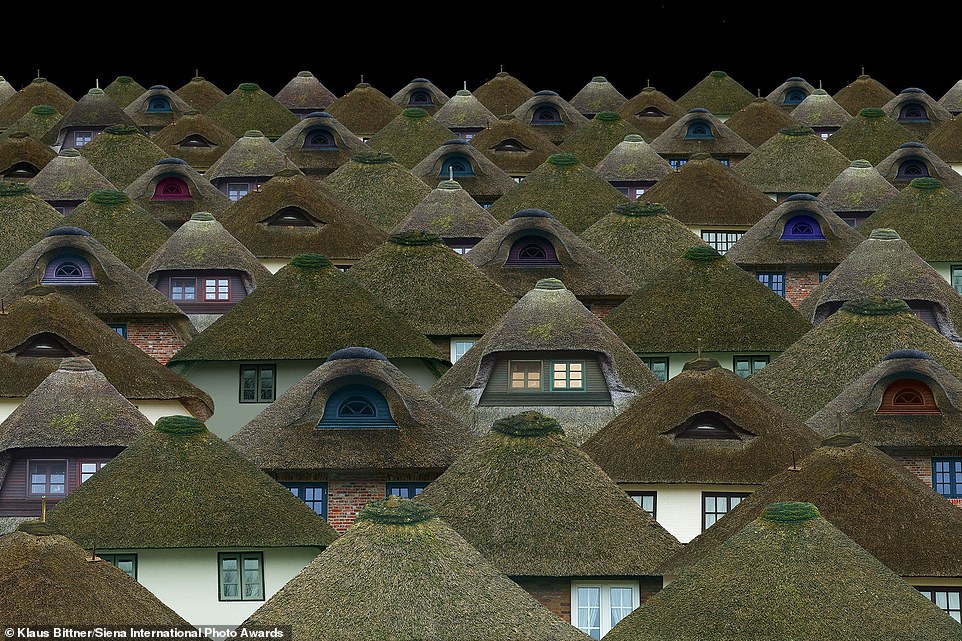 Winning a Remarkable Award in the architecture and urban spaces category for this shot is German photographer Klaus Bittner. He captured the image on the island of Sylt off the northern coast of Germany

Photographer Timothy Moon shot this image of a mountain in the Snæfellsnes region of Iceland. The stunning picture earned him a honourable mention in the beauty of nature category. He explained: ‘The coarse volcanic mountain has taken human form covered with a cloak of moss and heather in vivid autumn colours’ 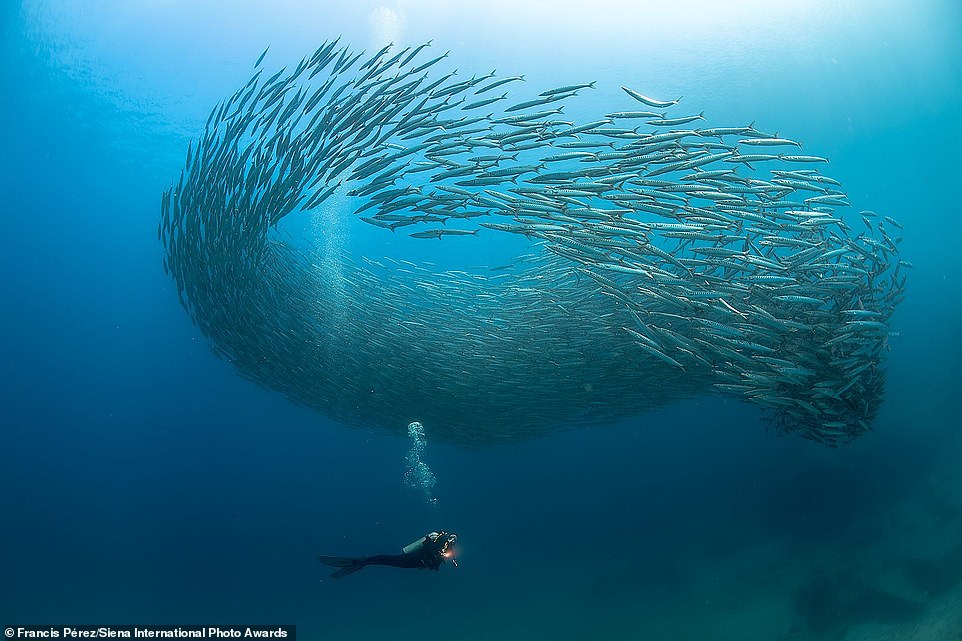