The 101 largest superyachts in the world for 2018 have been revealed – and there are eight ‘stunning’ new entries that launched this year.

The list has been produced by London-based Boat International magazine, which describes itself as the ‘global superyacht and luxury lifestyle authority’.

This year’s Top 101, it says, includes ‘some of the most innovative yachts yet, with all entries showcasing unique luxury features, from the largest yachts ever built in Australia and China, to a boat with a helicopter hangar, right through to a shark inspired superyacht’.

The superyacht Dar, pictured, which was built by Oceanco and designed by Luiz de Basto, is one of the eight new entries to Boat International’s 101 largest yachts list that the magazine has deemed as ‘stunning’

One of the new entries is the 90-metre (295ft) Dar, which has luxury accommodation for 14 guests, including a private owner’s deck with a curved, rotating 6.5m (21ft) sofa and a secluded terrace with a spa pool overlooking the bow.

Before she was christened, her project name was Shark, which reflected the fin shape of her mast in profile and, in plain view, her wing stations replicating a hammerhead shark’s eyes.

The key communal area is the main deck saloon, which boasts stunning views out to sea through 2.3 metre-high (7.5ft) windows, while the bridge deck swimming pool is flanked by sun pads and fed by a cascading waterfall.

Other star features on this Dutch-built yacht include a helipad, dive centre, hammam, sauna and submarine storage as part of a sprawling beach club.

Dar is also equipped with two lifts — one for guests, surrounded by a spiral staircase, and a second that allows for discreet service by the 31-person crew. 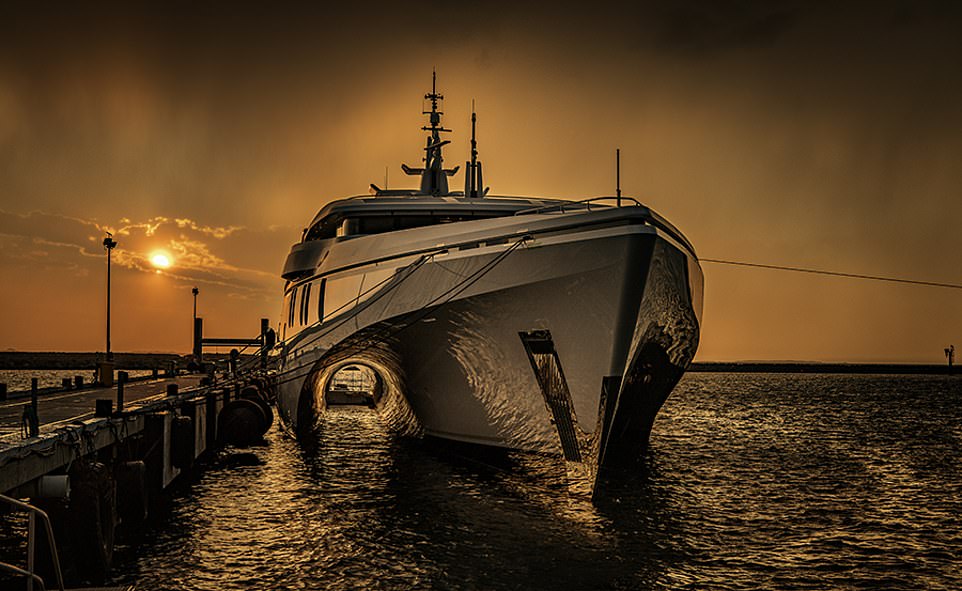 New entry White Rabbit is the biggest superyacht ever built in Australia. She measures a staggering 275ft 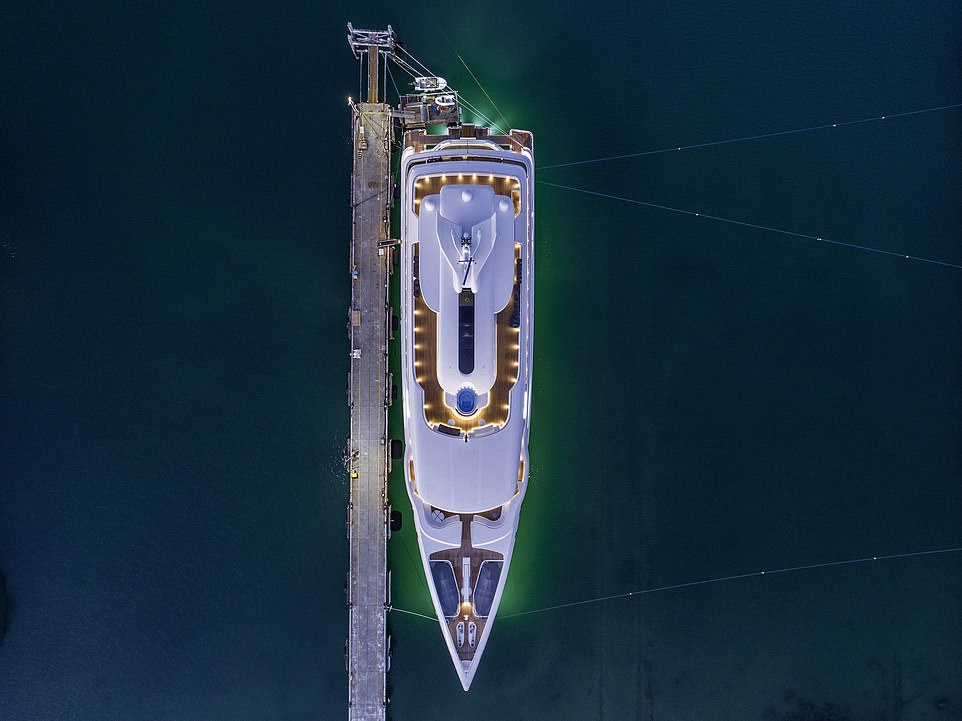 Styled inside and out by award-winning Sorgiovanni Designs, with naval architecture by One 2 Three Naval Architects, the swim platforms at each hull’s stern can link via a hydraulic bridge to create one long terrace for water sports

This boat was built in collaboration with UK-based studio Michael Leach Design, which developed her distinctive profile with an eye-shaped curve amidships, between her main and upper decks, and a particularly striking 14m-high (45ft) navigation mast.

As well as being the largest superyacht ever built in Australia, 84m (275ft) White Rabbit, which also launched this year, is the world’s biggest aluminium superyacht and the world’s largest trimaran superyacht.

In terms of gross tonnage (internal volume) she is 2.5 times the size of the next biggest Australian-built yacht.

Styled inside and out by award-winning Sorgiovanni Designs, with naval architecture by One 2 Three Naval Architects, the swim platforms at each hull’s stern can link via a hydraulic bridge to create one long terrace on the water for water sports. 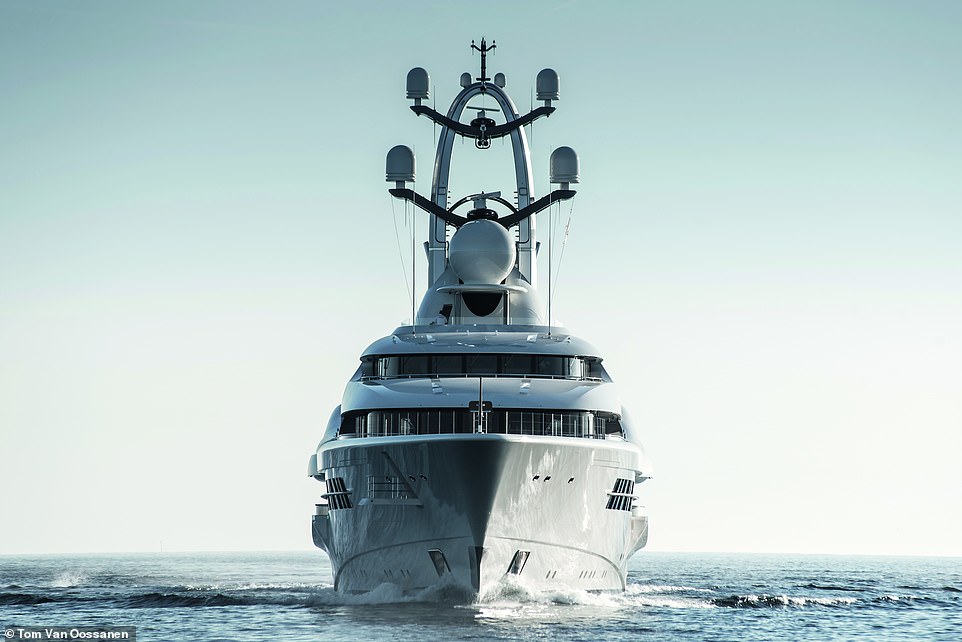 At 110m (360ft), Anna, another new entry, is the largest yacht ever built by legendary Dutch superyacht builder Feadship 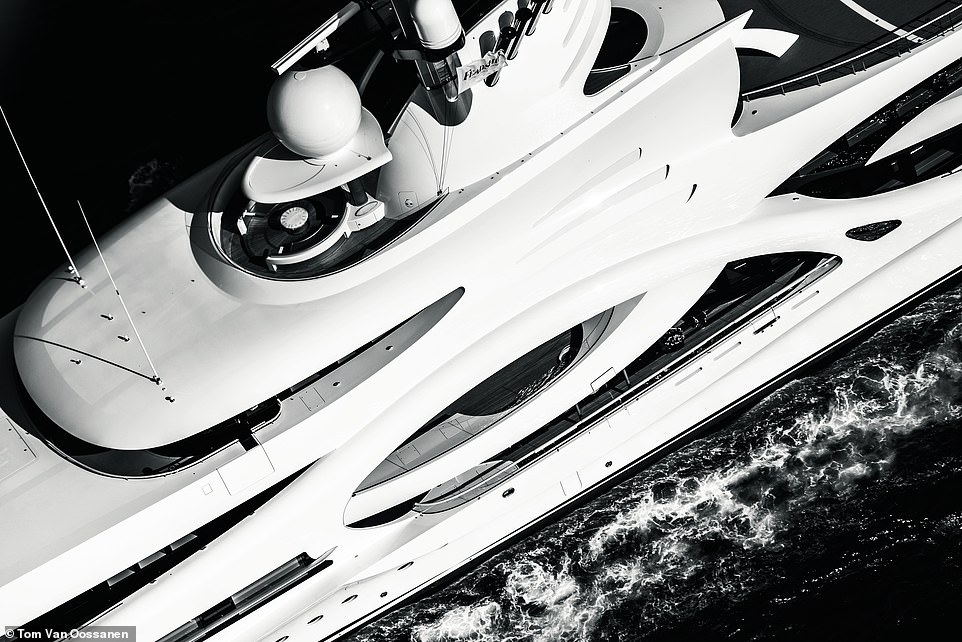 Anna was built in collaboration with UK-based studio Michael Leach Design, which developed her distinctive profile with an eye-shaped curve amidships 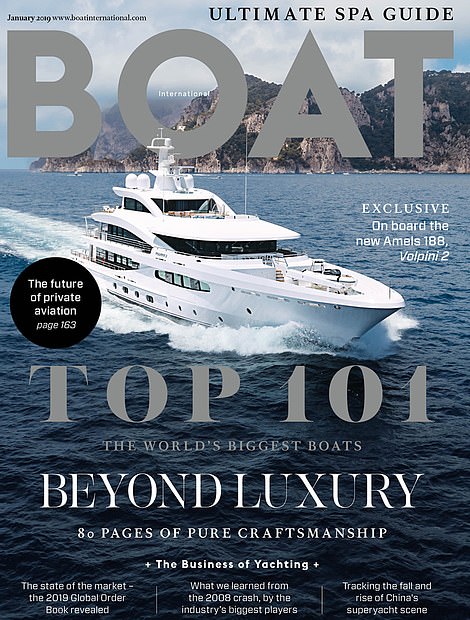 Stewart Campbell, Editor of Boat International, said: ‘It’s been another exceptional year for the superyacht sector’

White Rabbit is powered by a complex and energy efficient diesel-electric propulsion system for a top speed of 19 knots. She will be accompanied on adventures by her owner’s other yacht, 51m (167ft) catamaran Charley, which was also built at Aussie yard Echo Yachts.

Other new entries to the Top 101 list include the mammoth 135.5m (445ft) Crescent, delivered by German builder Lürssen, which features an innovative temporary helicopter hangar that folds out from the navigation mast, as well as a three-deck high window amidships.

She has eight cabins for 12 guests and has an unusual layout with a two-storey saloon.

She has a touch-and-go helipad and two large spa pools, one with a waterfall feature aft on the main deck and one forward on the top deck.

On the top deck, a gymnasium opens out on to a 5m (16ft) swimming pool, while the touch-and-go helipad is on the foredeck.

Stewart Campbell, Editor of Boat International, said: ‘It’s been another exceptional year for the superyacht sector with stunning new entries to this year’s Top 101 list, all of which embody the very best of design and construction. My personal highlight is the 84 metre trimaran White Rabbit – not only the largest trimaran yacht in the world, but also the largest superyacht ever built in Australia.

‘It’s a design that truly pushes the boundaries of what’s possible in this industry. We’re tracking some exceptional projects expected to be delivered in 2019, so next year’s list should break new ground again.’ 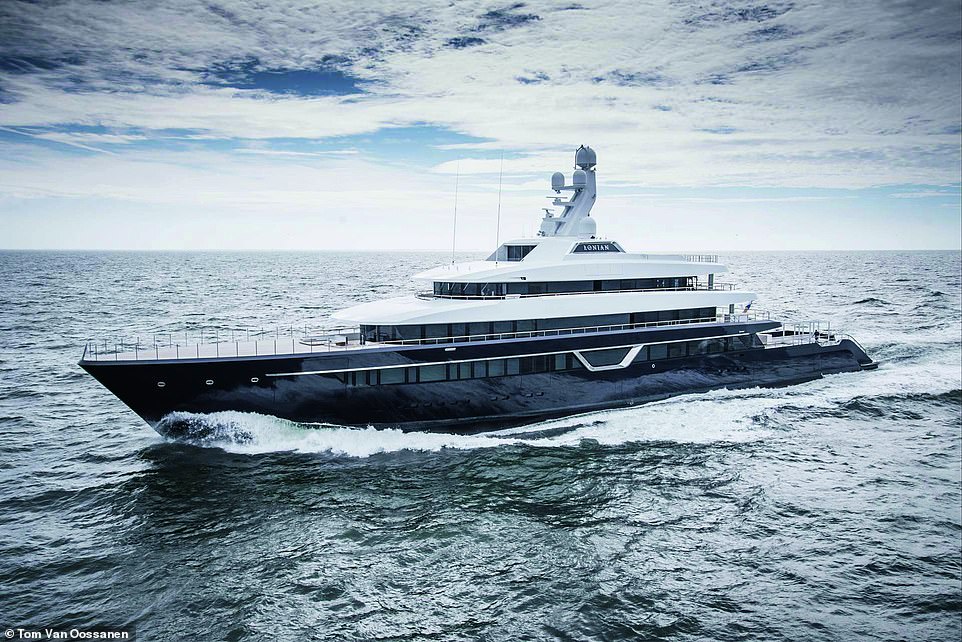 THE WORLD’S BIGGEST SUPERYACHTS OF 2018

THE 2018 NEW ENTRIES AND THEIR POSITION IN THE LIST