The stunning winners of the panoramic photography awards revealed

The stunning shots have been revealed as the winners of an international panoramic photography contest.

Both professional and amateur photographers were invited to enter their best landscape shots for the Epson International Pano Awards 2018 in a bid to win more than $50,000 (£38,000) in cash.

And this year’s competition received 4,937 entries from 1,251 photographers in 74 countries.

The overall winner of the contest was Veselin Atanasov from Bulgaria, who impressed with his shot of the sun rising over a tree-lined hill in Tuscany. We were also very taken with the shot of lightning lashing the Grand Canyon, a diver in a Brazilian abyss and a haunting shot of fog drifting around a U.S swamp.

Both professional and amateur photographers were invited to enter their best landscape shots for the Epson International Pano Awards 2018 in a bid to win more than $50,000 (£38,000) in cash. The winner of the Epson ‘digital art’ prize was Colin Sillerud from the U.S, with this shot of lightning sparking over the Grand Canyon. The digital art award is aimed at ‘rewarding excellence in modern digital post-processing’ 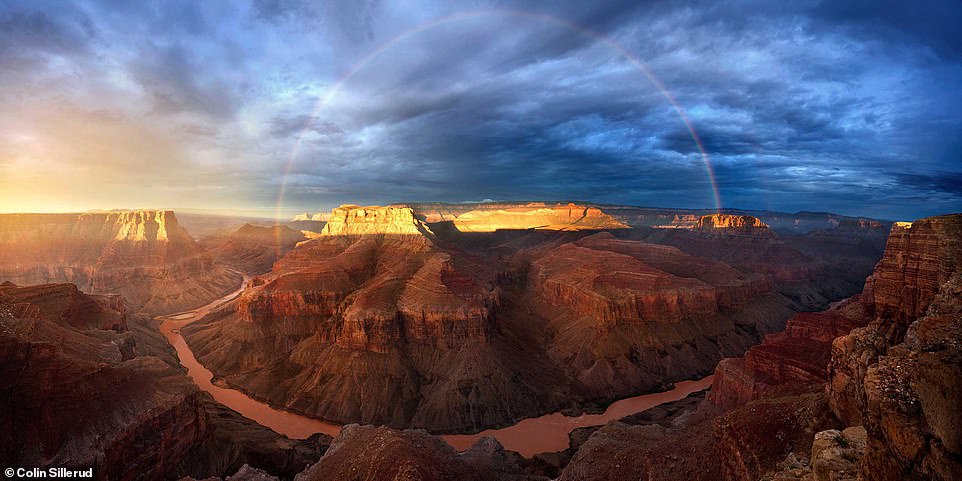 This panorama, captured by Colin Sillerud, shows a rainbow arching over the red rock of the Grand Canyon. It was entered into the amateur landscape category 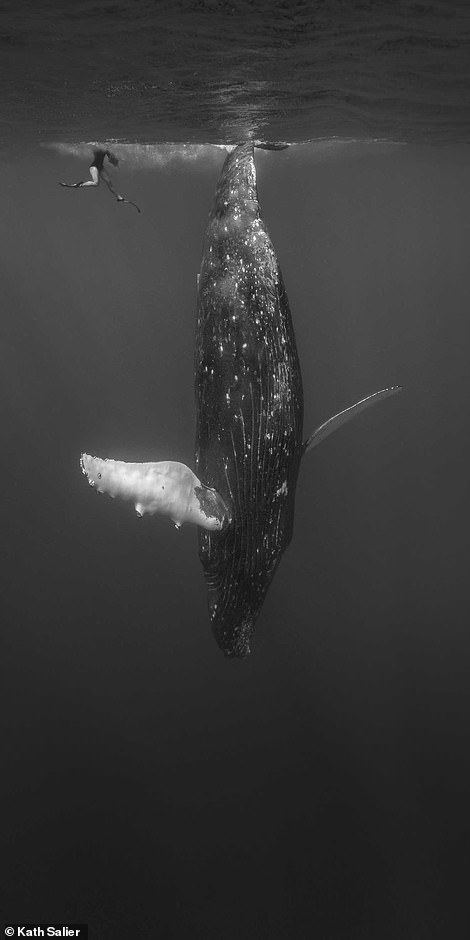 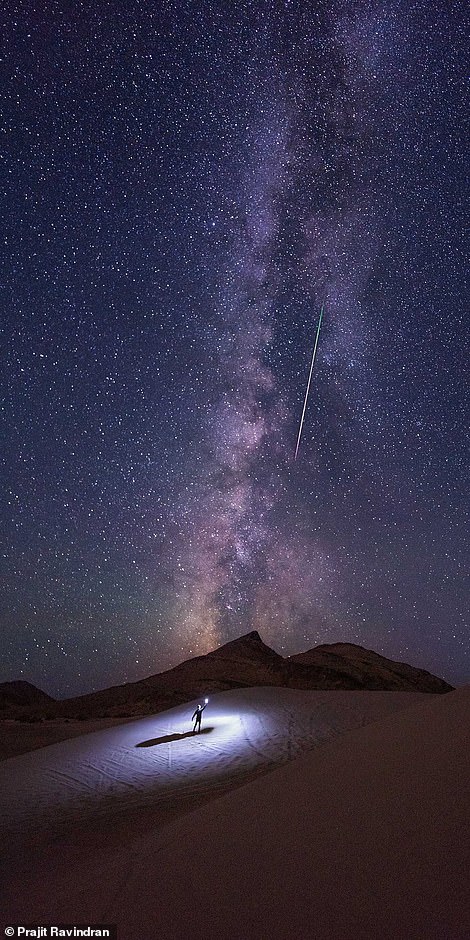 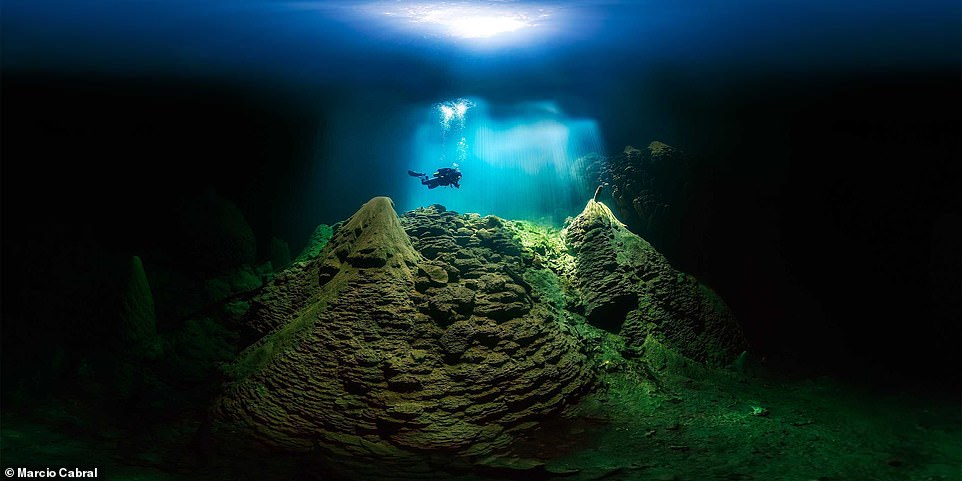 Marcio Cabral took this sweeping underwater shot while diving in the Anhumas Abyss in Bonito, Brazil. The spot is popular with tourists thanks to its crystal-clear waters and fascinating limestone formations 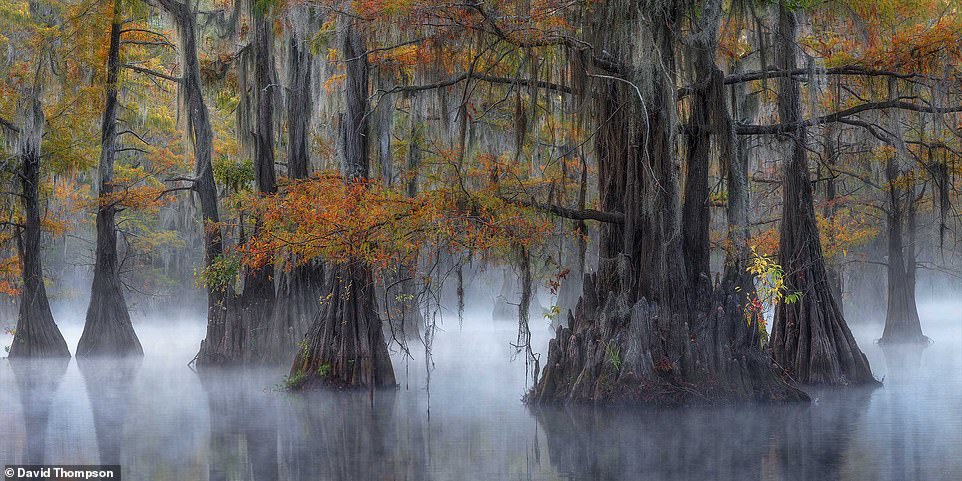 This haunting shot of fog rising around a ghostly swathe of trees was taken by David Thompson in the southern swamps of the U.S. It was entered into the open landscape category 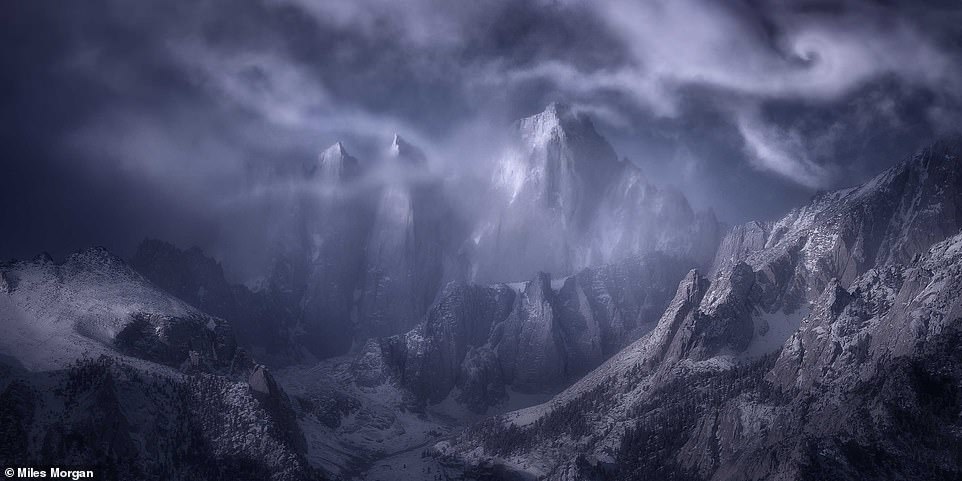 Miles Morgan trekked to the foothills of Mount Whitney in California to get this stormy image. It is the tallest peak in the U.S. state, topping out at ‎14,505 feet. It was entered into the open landscape category 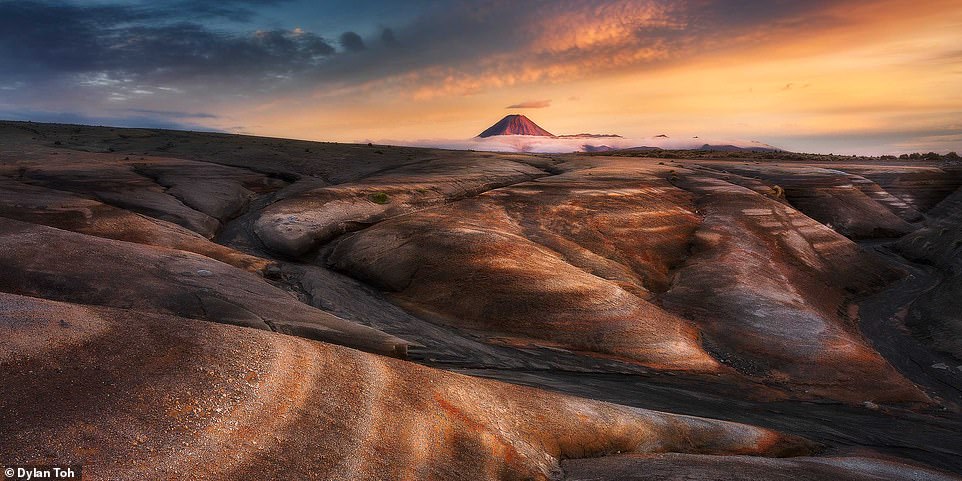 A view of Mount Ngauruhoe, which is New Zealand’s newest and historically most active volcano. The sun-kissed shot was taken by Dylan Toh. It was entered into the open landscape category 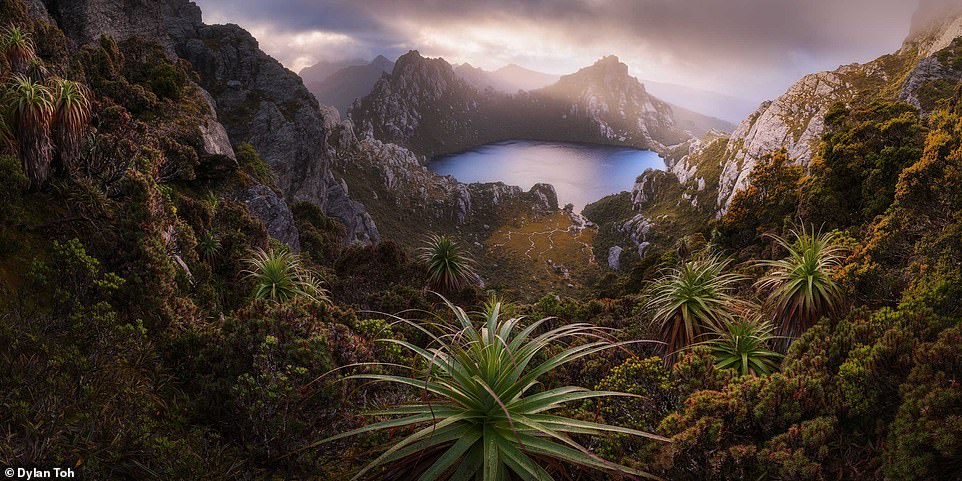 Dylan Toh found the perfect perch for a panoramic shot of Lake Oberon in Tasmania. It was entered into the open landscape category

The overall winner of the 2018 open competition was Veselin Atanasov from Bulgaria. He said of his winning shot, seen above: ‘I shot this picture during one spring morning in 2017 in Tuscany. I remember that I had a 70-200mm lens attached to my camera, and the scene in front of me required a wide-angle lens. The sun was quickly rising upward and I decided not to miss this moment while replacing a lens, so I shot the scene through the panorama of several frames from my hand without a tripod’ 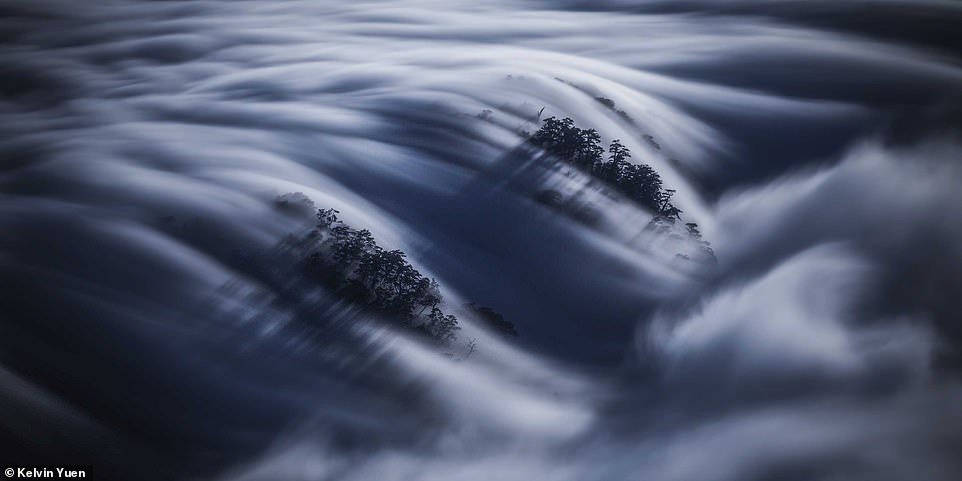 Kelvin Yuen titled this eye-catching photo, taken in Taiwan, ‘wave of cloud’. He entered it into the amateur category and scored first place

The runner-up in the 2018 amateur competition was Peter Li from the UK with his shot of the blue whale skeleton at the Natural History Museum (left). Meanwhile, Mads Peter Iversen came second in the digital art category with his shot of the Northern Lights swirling over Lofoten in Norway (right)

Carsten Bachmeyer’s panoramic shot captures the stunning scenery around the Dolomites mountain range in north-eastern Italy. It was entered into the open landscape category 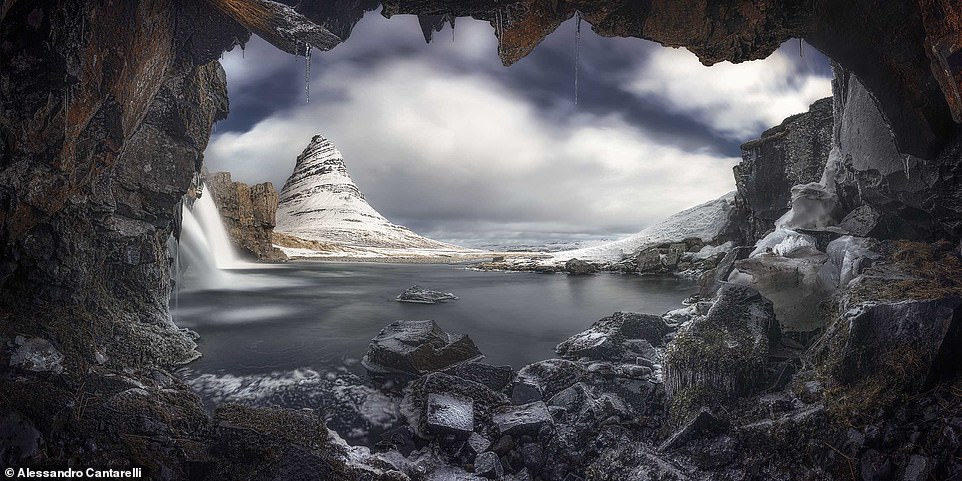 This icy image was taken by Alessandro Cantarelli as he explored Iceland’s frozen landscapes. It was entered into the amateur landscape category 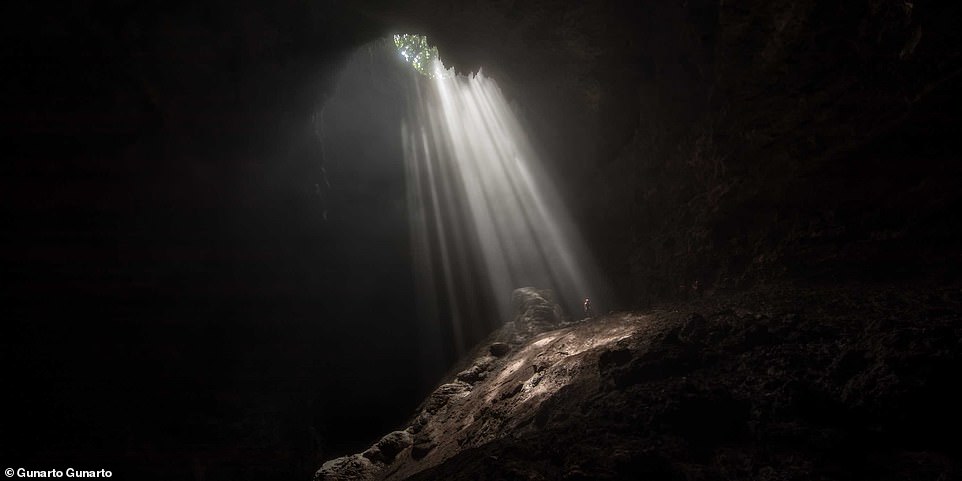 Shafts of light shine down into a cavern in Indonesia in this striking image taken by Gunarto Gunarto. It was entered into the amateur landscape category 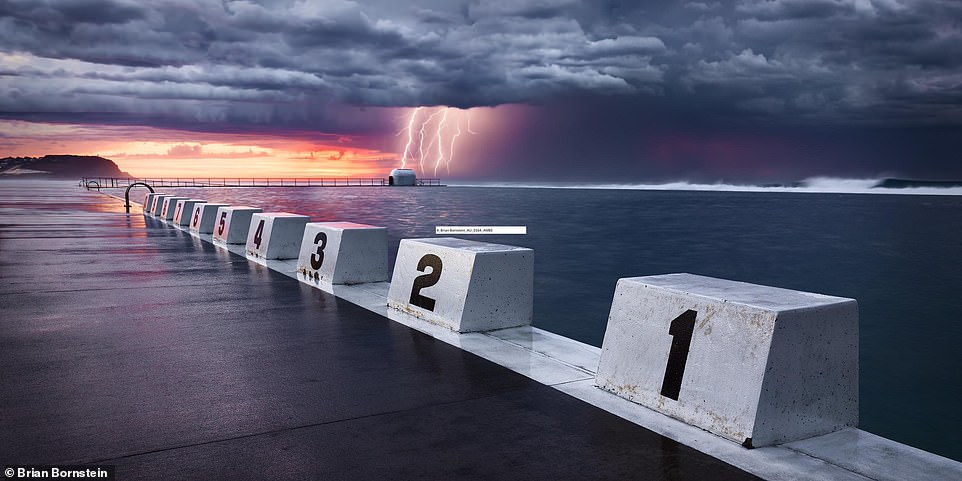 This dramatic shot of lightning crashing down over the Merewether Baths in Australia was captured by Brian Bornstein. It was entered into the ‘built environment’ category 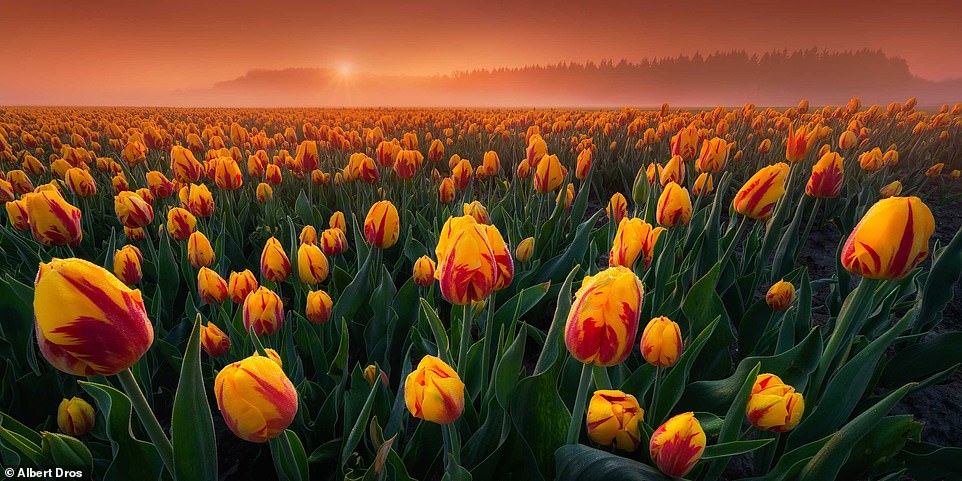 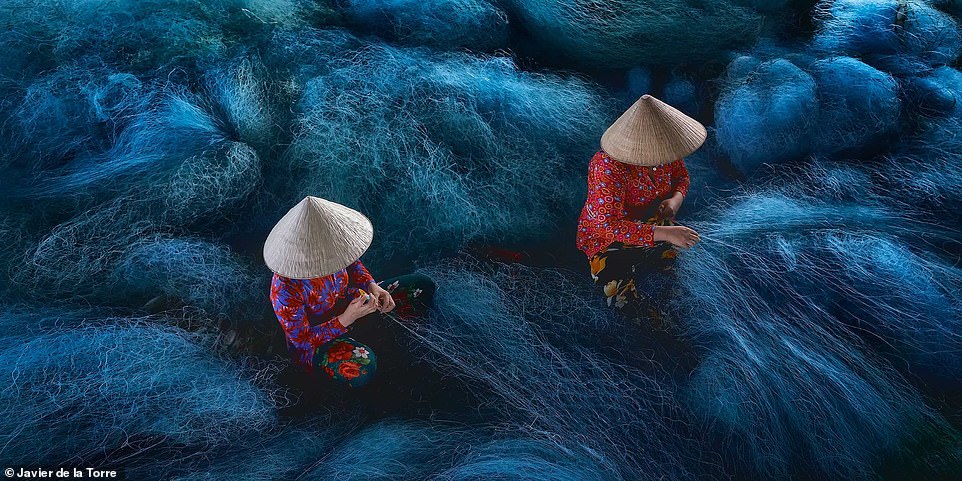 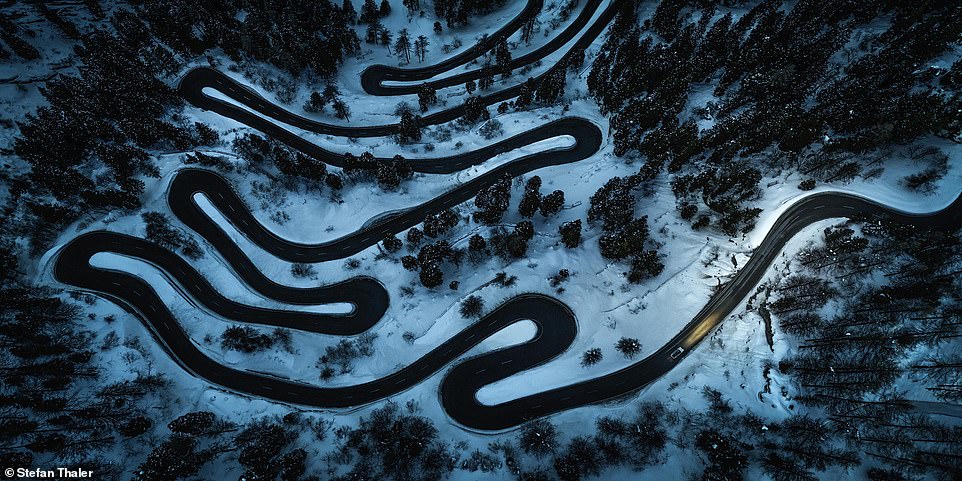 Stefan Thalerfrom from Austria took this image of the snaking Maloja Pass mountain pass running through the Swiss Alps. It was entered into the ‘built environment’ category 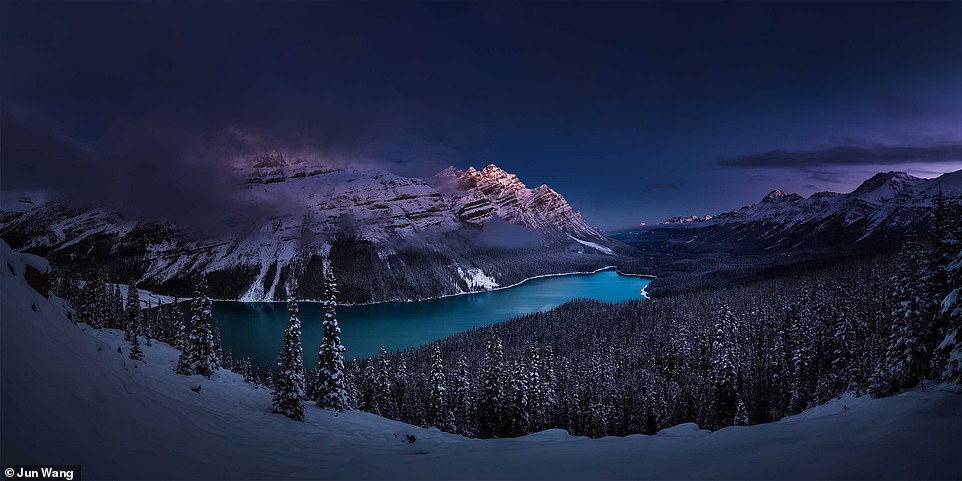 Jun Wang took this shot of the glistening blue waters of Peyto Lake in Banff National Park, Canada, while venturing outdoors in the darkness. It was entered in the amateur landscape category 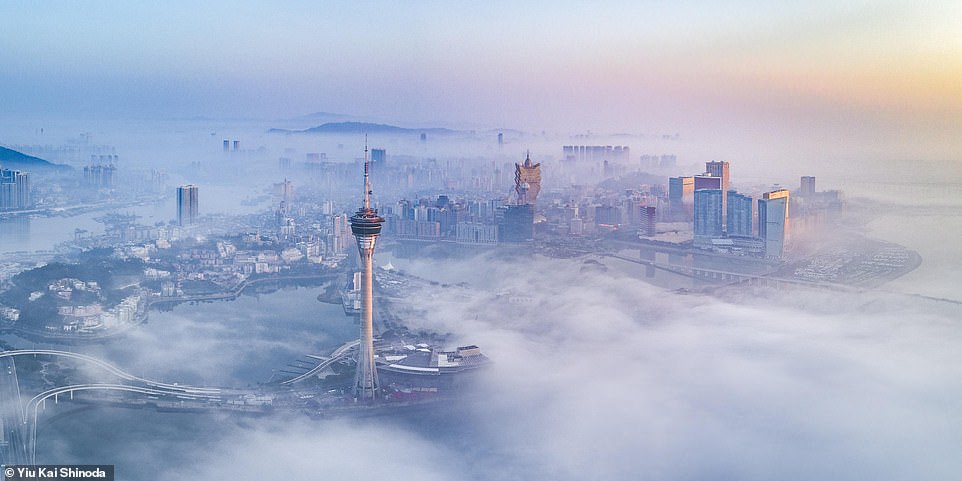 Yiu Kai Shinoda captured a thin shroud of fog hovering over the Macau Peninsula, with skyscrapers peeping through. It came second in the ‘built environment’ category 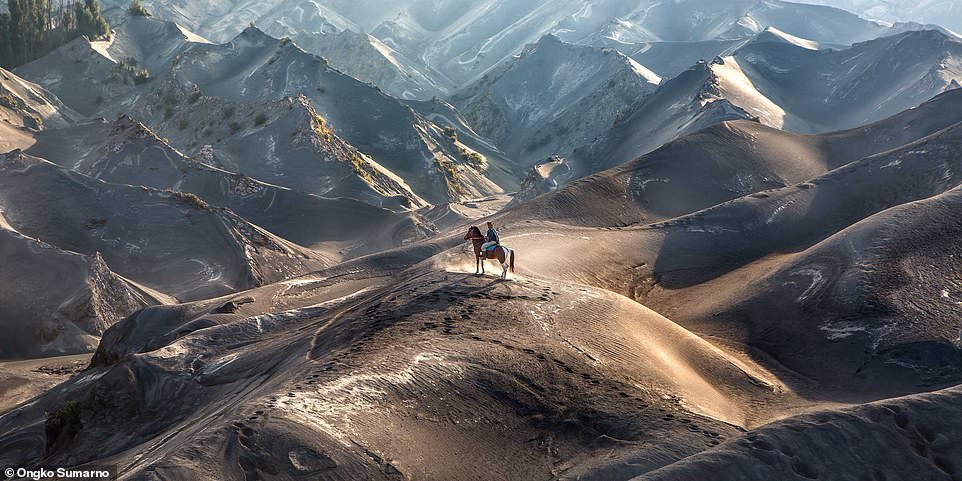 This image, showing a horse rider in a mountain range in Indonesia, was taken by Ongko Sumarno. It was entered into the amateur landscape category

The overall winner of the 2018 amateur competition was Nathaniel Merz from South Korea. He said of his winning shot, seen above: ‘Ever since first exploring the mountains here in Korea I have fallen in love with the bonsai-like pine trees clinging to the rocky peaks. This particular tree was always one of my favourites for its tall, regal shape and the fact that it stood alone right on the edge of a cliff. While it is beautiful year round, it looks particularly beautiful covered in just the right amount of frost and snow like I was luckily able to capture [one] morning’ 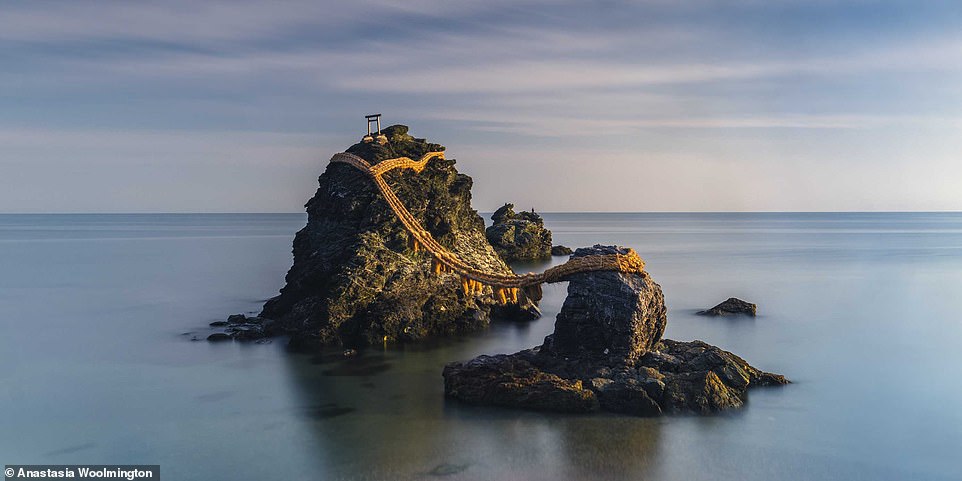 Anastasia Woolmington from Australia took this photo while travelling in Japan. She said of the shot: ‘Meoto Iwa or Wedded Rocks is a pair of sacred rocks in the sea off Futami in Japan. The two rocks are joined together in matrimony by a sacred Shinto straw rope called a shimenawa. The larger of the two rocks represents a husband, while the smaller rock represents the wife. Many couples from Japan travel there to ask for blessing for their marriage’ 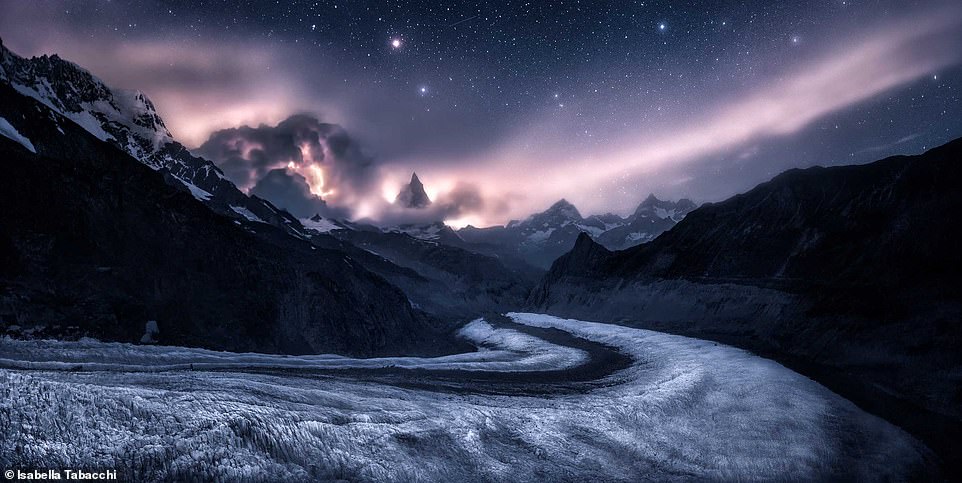 Isabella Tabacchi took this starry night shot as she ventured out around the Monte Rosa hut in Zermatt, Switzerland 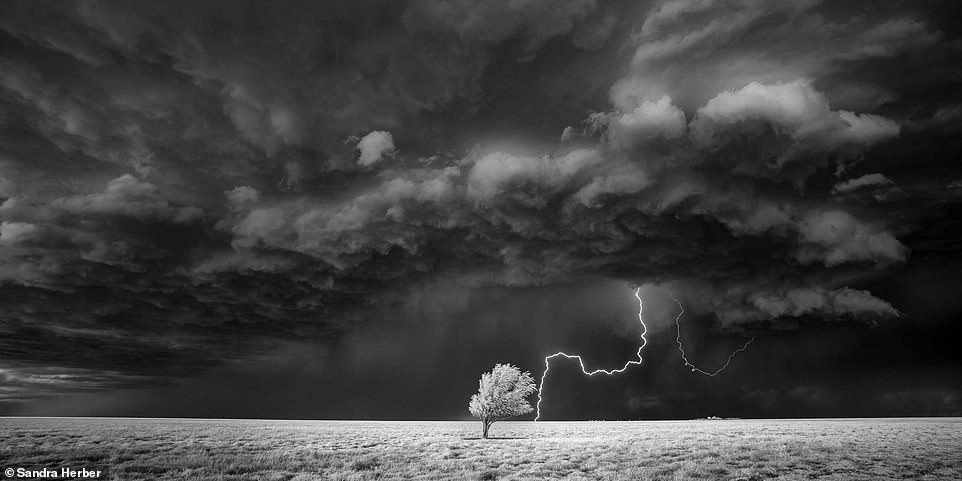 This atmospheric shot was taken by Sandra Herber during a storm washing over Oklahoma in the U.S. It came third in the amateur landscape category