It’s fair to say Edvard Munch’s most famous art-work is considerably more famous than he is. In fact, as the Norwegian’s name recedes further and further into the past, his painting The Scream constantly takes on new life.

In recent months, its anguished subject – hands on head, eyes wide open, and mouth letting out a yell – has inspired countless cartoonists reflecting on the Brexit process.

A superb exhibition of Munch’s prints at the British Museum, however, makes clear there was a lot more to Munch than The Scream. 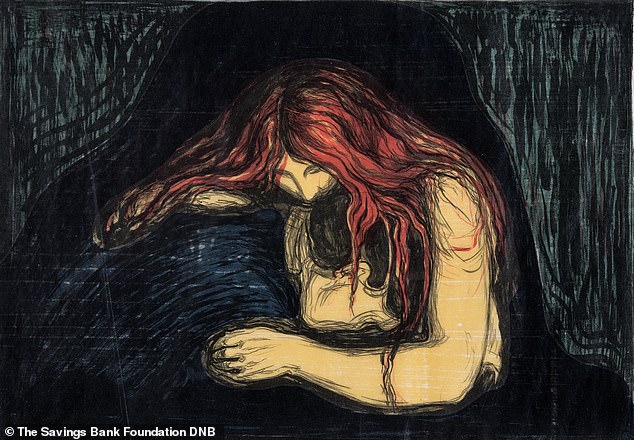 You may think that an exhibition dedicated to prints would lack colour. But this superb show of Edvard Munch’s art is anything but dull as vibrant works such as Vampire II (1896, above) prove

Born in 1863, he lost his mother aged five and elder sister Sophie aged 15 (both to tuberculosis). As an adult, he had long battles with alcoholism and agoraphobia – and never married.

Munch held little back when it came to expressing his woes in art. Yet, as with Van Gogh, the effect is haunting or electrifying rather than depressing. In The Sick Child, Sophie is depicted on her deathbed, her lifeless face so drained of colour it all but merges with the white pillow beneath her.

Thinking Norway too small for his artistic ambitions, Munch moved to Berlin in the 1890s, and it was there he made his first prints. He became popular with Germans, and demand for his pictures soon grew so high that he started producing them in large numbers. 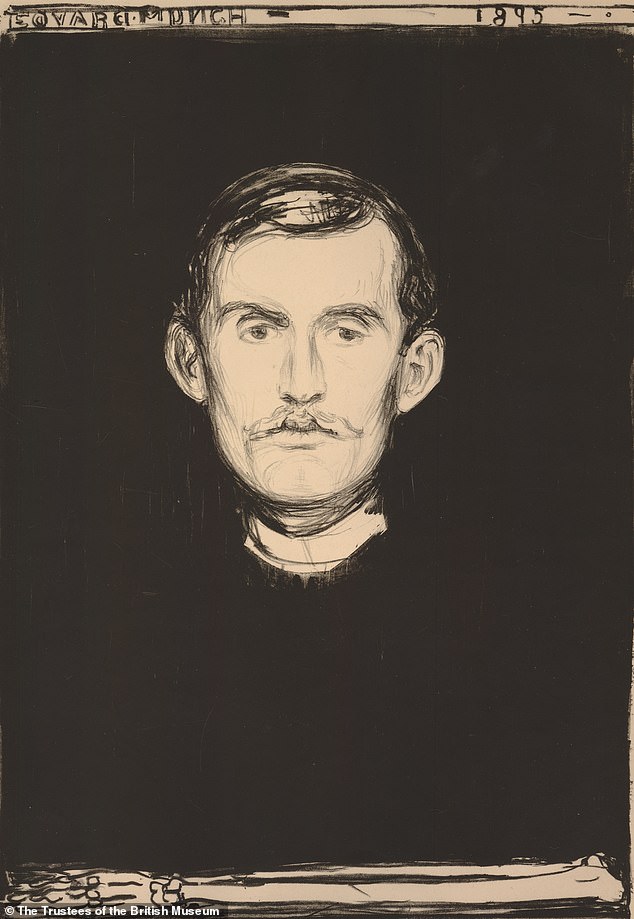 On the evidence of this show’s works, Munch (Self-Portrait, 1895, above) was a print-maker of the very first rank. I’d even go so far as to say his prints are more compelling than his paintings

The exhibition includes a lithograph version of The Scream. It’s based on the painting of the same name but differs in certain key ways. For a start, it’s in black and white.

Much of the painting’s power derives from the piercingly red colour of the sky, matching the piercing scream of its subject. The print, by contrast, relies on the clouds to make much of its impact: they look like huge waves and, as such, suggest scream-worthy waves of sound.

Prints exhibitions often fail to attract a big crowd because of their lack of colour. It should be said, though, that – The Scream aside – Munch’s prints are full of colour. One suspects the orange hair of the woman biting her lover’s neck in Vampire II could be seen from 100 yards away. 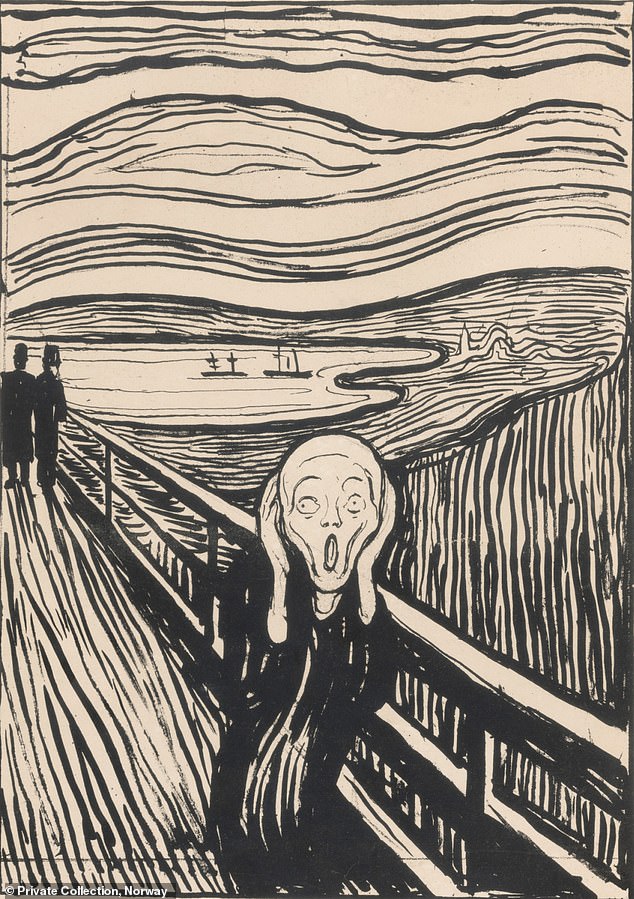 The exhibition also includes a lithograph version of The Scream (1895, above). It’s based on the painting of the same name but differs in certain key ways

Munch was a highly innovative print-maker, sometimes using different techniques in the creation of a single image (Vampire II is a mixture of woodcut and lithograph).

For those interested in learning about his methods, there are helpful wall-texts throughout. However, even for those who aren’t, the revelations come thick and fast.

Certain woodcut prints, for example, look like tree trunks with a picture superimposed on them. Munch loved to exploit the grainy texture of the woodblocks with which he made them.

On the evidence of this show’s 83 works, Munch was a print-maker of the very first rank. I’d even go so far as to say his prints are more compelling than his paintings.

They really are something to scream about.

Painting Childhood: From Holbein To Freud 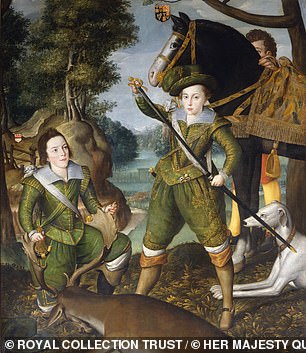 All artists were once children. Which is why, perhaps, such an eclectic grouping of Murillo, Gainsborough, Reynolds, Hogarth, Millais and more can sit so well together in this intriguing and occasionally heart-wrenching show.

It covers more than 500 years of art, but its stars are Van Dyck’s The Five Eldest Children Of Charles I, and an on-loan sketch by Holbein of Henry VIII’s infant son Edward: the boy’s eyes are detailed, intense and alive. He would become King Edward VI but died aged only 15.

The tension between sweet and disturbing gives this show its energy. It veers from Millais’s sugary Bubbles, used to sell Pears soap, to the leering children in Judith Leyster’s Boy And A Girl With A Cat And An Eel.

And pause for a moment in front of Winterhalter’s Albert Edward, Prince Of Wales: the future Edward VII has been forced into a sailor suit and ringlets and he doesn’t look too happy.

You might have had a tough childhood, but at least Queen Victoria wasn’t your mum.