The surprise new boost from HRT? You may LOOK years younger, too

Just 10 per cent of post-menopausal women in the UK are taking hormone replacement therapy (HRT) after the numbers using it plummeted in the wake of studies 20 years ago that suggested it increased the risk of breast cancer.

These studies were later revealed to have been flawed, and more recent research has shown the overall benefits of HRT, such as protection against heart disease, generally outweigh the very small short-term risks.

But now it seems those 10 per cent of women might be benefiting in another way, with the first study to show the stretchy, saggy appearance of post-menopausal skin can be reversed by HRT’s effect in boosting sex hormones.

Scientists in the dermatology department at Manchester University are about to publish their research showing for the first time that HRT users have greater levels of ‘elastic fibres’ in their skin and better levels of waxy moisturising substances called lipids, which maintain the skin barrier (and keep it waterproof), compared to non-HRT users.

Significantly, they also have higher levels of keratinocytes, the main group of cells forming the skin barrier — these make up 90 per cent of the skin and as well as protecting it against microbes and the sun’s harmful UV rays, they are responsible for making and secreting lipids.

But the new research, which involved taking tiny, but full-thickness, skin samples from volunteers using a device similar to a paper hole punch, found that HRT preserved the keratinocytes, reducing the skin thinning and loss of firmness experienced by post-menopausal women.

Although the research programme is being sponsored by Boots, which is working on cosmetic skin treatments to boost post-menopausal skin, Rachel Watson, a professor of cutaneous science at Manchester, one of the lead researchers, said it has a bigger goal.

‘If we can identify which components in the skin are altering with menopause then we can think about ways of treating the skin deficits that we see in old age,’ she told Good Health. ‘Skin breakdown, the failure of healing mechanisms, ulcers and other diseases in very elderly people are a real problem.’

Indeed, a report published last year in the BMJ estimated that 3.8 million people a year are treated by the NHS for skin ulcers and other chronic wounds, at a cost of £8.3 billion to the health service.

Professor Watson adds: ‘The more we know about skin structure and skin ageing, the better chance we have of treating these other problems.’

These three groups were also compared against a group of 29 men of the same age, plus two further groups of nine women aged under 30, and seven aged over 70 who were not on HRT — their skin analysis provided more information confirming that the number of keratinocyte cells do indeed diminish with age, but that HRT appears to halt that process.

This work builds on earlier studies from the 1980s, which showed when girls with the eating disorder anorexia became so thin that their periods stopped, the decline in oestrogen levels had a catastrophic ageing effect on their skin quality, and it became similar to the thin papery skin of older, post-menopausal women.

‘I really welcome work such as this Manchester project,’ says Mike Savvas, a consultant gynaecologist and menopause specialist at King’s College Hospital, London, who had been involved in the earlier studies 35 year ago. ‘It’s a shame that there has not been more interest in this very important field for so long.’

Unfairly, it may seem, the men in the study had better skin than their female counterparts of the same age. 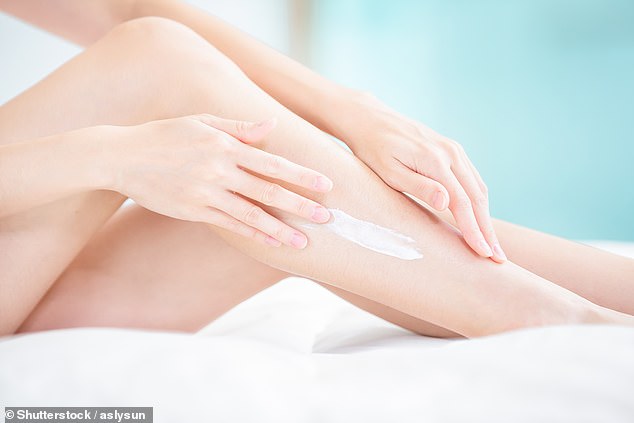 How it seems those 10 per cent of women might be benefiting in another way, with the first study to show the stretchy, saggy appearance of post-menopausal skin can be reversed by HRT’s effect in boosting sex hormones

This is because testosterone governs skin quality in men, explains Neale Watson, a consultant gynaecologist and menopause specialist from Hillingdon Hospital in West London.

Men don’t have the sudden hormonal decline of menopause so their skin stays better for longer. ‘If you look at a 65-year-old man and a 65-year-old woman, her skin will have aged much more dramatically than that of the man,’ says Mr Watson.

‘For many years post-menopausal women were getting HRT, doing better and getting the benefits to their skin, then along came these flawed studies making an association between HRT and breast cancer.’

He is referring to the initial results of the Women’s Health Initiative, a 15-year study launched in 1991 which involved 160,000 women. In 2002 an analysis of the data showed that HRT had more detrimental than beneficial effects.

Following these findings, many women stopped taking HRT and new guidance on prescribing it was issued for doctors.

However, in the ensuing years a re-analysis of the data showed that the benefits of HRT in younger women or in early postmenopausal women outweighed the small (and short-term) risk of cancer, with those taking it also less likely to develop heart disease, and having improved life expectancy.

Despite these findings many doctors and middle-aged women continue to regard HRT with suspicion. Dr Theodora Kalentzi, a menopause specialist at the private Medical Prime clinic in London, points out that while the Manchester study is too small to provide definitive evidence: ‘We know HRT has multifunctional benefits and skin is one of them, but there are still only 10 per cent of post-menopausal women using it.

‘It is taking such a long time to overcome this ingrained negative message that it’s dangerous.’

Suzy Pilkington, a lecturer in skin ageing at Manchester University and primary researcher in the study, said: ‘One of the most significant findings is the changes in the lipids that we have seen post-menopause.

‘It’s looking like some of this decline can be reversed by HRT which is a landmark finding. It’s beyond our capabilities in this university department to go down the route of developing a new treatment and there are still a lot of health concerns around prescribed HRT anyway.’

But, she adds: ‘We are trying to raise awareness that women should go and speak to the doctor about their skin quality. People should talk about what the options are for HRT.’

For those who can’t use HRT, for instance women who have had hormone-dependent breast cancer, or who don’t want to take it, the future may lie in products containing lipids, she suggests.

‘There are a few compounds in the pipeline. We are looking to see how those compounds improve repair or alter skin ageing.

‘We are looking at combinations of new compounds but including existing skin cosmetic ingredients such as niacinamide, which helps build skin cells, and ceramides, which are types of lipids that make up the skin.

‘However, we need a better understanding of which ceramides are key in these women. You can see changes in ceramides in lots of people aged over 75 but we don’t know if those changes start to happen at menopause.’

In fact, there are known to be at least 1,000 different forms of natural ceramide and more are being discovered. A few that have been analysed are now used in cosmetic skin treatments to form a matrix between skin cells to keep it firm. Dr Mike Bell, the scientific skincare adviser at Boots, said the Manchester work may lead to some form of lipid replacement therapy for post-menopausal women. ‘There is a complete dearth of scientific information in this area,’ he says.

‘We have products that work reasonably effectively already, but within the next two years we expect to have a new product which addresses this new knowledge.’

How music can benefit your health. This week: Improves how you walk

Walking to the steady beat of music — fast or slow, instrumental or vocal — may help improve gait, particularly for those with Parkinson’s disease (where walking can become slower and less stable).

In a 2019 study at the Sapienza University of Rome and other centres, researchers asked healthy young and older participants as well as Parkinson’s patients, to walk while listening to tracks from four musical genres. They found a huge improvement in walking, notably in the participants’ speed and range of motion.

Rock, motivational and heavy metal songs were particularly effective, compared to classical music which, despite improving posture (such as leaning excessively), was also shown to reduce speed.

It’s thought that listening to music provides a precise auditory cue that people match their walking speed to, rather than relying on defective internal timing.