The surprising signs of COVID-19 in elderly people

Elderly patients are among the groups at greatest risk for becoming critically ill from coronavirus and even dying of the infection – but their signs of the infection might not be as obvious as the now-widely known tell-tale signs.

Persistent cough, fever and shortness of breath are the primary symptoms of COVID-19, and many people who don’t have thee have been turned away at testing sites.

But the changes the body undergoes with age may alter the immune systems of older patients. making them less likely to show these markers of infection.

Instead, an older person might simply seem more tired than usual, less hungry and may seem more confused, disoriented and off-balance.

Doctors are warning that families and caretakers must not dismiss these symptoms as a product of age, but immediately seek help, before these elderly people enter a rapid decline that’s led to the deaths of so many already.

Elderly people’s immune systems are in decline – and it may mean they don’t develop the typical symptoms of coronavirus like cough and fever. Instead, they may become confused, extremely tired or even collapse. Pictured: A nurse talks to her older father through a window in Hayward, California (file)

At baseline, COVID-19 behaves much like other respiratory viruses.

It typically enters the body through the nose and mouth, and possibly the eyes.

In most adults this irritation will trigger inflammation, cough and a fever.

As the the infection travels lower into the body, its attacks on the lungs can trigger inflammation deeper in the lungs and lead to shortness of breath.

Mysteriously though, some people may never become short of breath, even while their blood oxygen levels fall dangerously low.

Our bodies work differently at different ages, however, and the changes that come with age can mean we respond in different ways.

Many of our bodies’ processes slow and become altered with age.

Bone marrow produces fewer of certain fighter and signalling cells – B and T cells – as we get older.

Although elderly people have just as many of some other immune cells, such as lymphocytes, they become more sluggish. 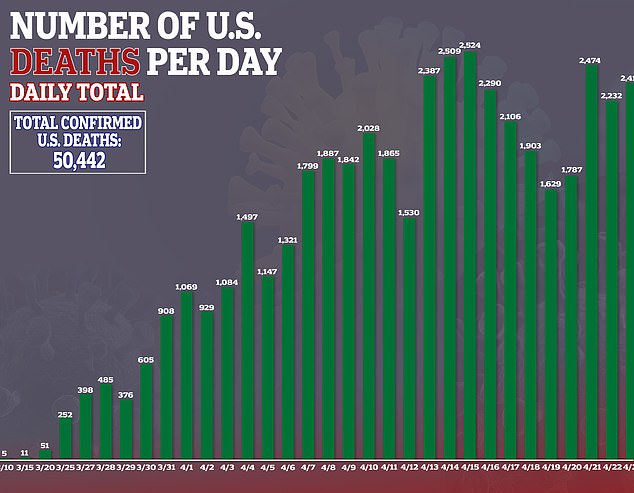 Older people are more vulnerable to infection and at greater risk of dying of coronavirus, accounting for many of the US’s more than 46,000 deaths, so they must be closely monitored for atypical signs of the virus

So when an invader is present in an elderly person, their immune system respond more slowly and less robustly.

It’s the immune system’s response to infection that triggers cough, fever and inflammation, so these might not be seen in an elderly person.

Elderly people’s bodies also don’t regulated temperature as effectively as younger peoples’ do, which may lead to differences in how a fever presents.

MENTAL CONFUSION AND FOGGINESS MAY BE A WARNING SIGN

Dementia and general mental decline are devastating and common among older populations.

However, not all cognitive changes are as mundane as symptoms of age, nor as catastrophic as Alzheimer’s disease or stroke.

Scientists aren’t exactly sure why, but many infections – including flu, but most commonly urinary tract infections – trigger confusion and delirium in elderly patients.

Some scientists think this is related to cytokines, immune cells that are overwhelming many coronavirus patients’ bodies in a ‘storm.’ 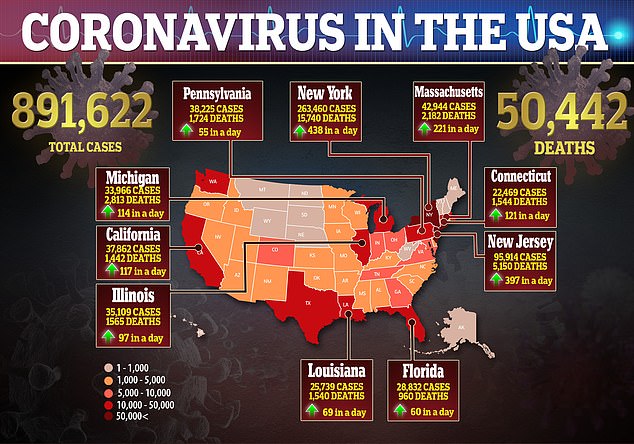 These cells have considerable effects on the central immune system, which may be why elderly people with coronavirus develop cognitive issues.

Dr Laura Perry treated a patient at University of California, San Francisco, who was in her 80s, had cold symptoms as well as confusion.

The woman could hardly stay awake during her exam and had no idea where she was, Dr Perry told CNN.

After being diagnosed with hypoactive delirium, the woman tested positive for coronavirus.

OLDER PEOPLE MAY BE EXTREMELY TIRED AND UNABLE TO COUGH

And without fully functional reflexes, elderly people’s bodies may not respond to irritation in normal ways.

Normally, coronavirus’s attacks on the airway might make us cough, but elderly people with weaker reflexes might be unable to do so.

As a result, another primary symptom providers are told to look for in this population might be missing.

Lethargy, however, is common across all age groups and might be even more pronounced in older people.