Despite being the most sought after in the supermarkets, the plumpest red tomatoes aren’t the sweetest, a new study reveals.

Green tomatoes, which are crumbed and fried in the southern United States, may therefore be more satisfying in a salad or a homemade pasta sauce before they reach an attractive ruby red colour.

HOW TO GROW TOMATOES FROM SEED

– When dry, put the seeds in small pots and fill with at least 1 cm of soil

– Spray regularly with water and add liquid fertiliser if you have it, or tea leaves from a used tea bag if you don’t

– Keep in a sunny position

– Within seven days, your tomato plants will have started to grow

– Re-pot into bigger pots as your vine begins to grow

For the study, Miyako Kusano and coworkers at the University of Tsukuba analysed the pigment molecules in 157 kinds of tomatoes.

Varieties included the cultivated tomato (Solanum lycopersicum), which you’re most likely to find at your greengrocers and is a bright red when ripe, and Solanum pimpinellifolium, commonly known as the red currant tomato.

They also looked at the green zebra, which gets its name from its green colour and subtle yellow stripes even when ripe, as well as the chocolate cherry (brown in colour) and the dixie golden giant (orange).

Rather than tasting the tomatoes themselves, the experts used chromatography to separate the chemical components in a sample from each tomato.

Pigment molecules in tomatoes are called carotenoids and are usually red, yellow, or orange – but these compounds don’t have a flavour.

Carotenoids are known to be important for human health benefit to decrease the risk of disease, the experts say.

Carotenoids degrade into compounds called apocarotenoids, which are responsible for flavour, taste, aroma and fragrance of flowers and foods.

‘Some apocarotenoids are released from the fruit as flavor compounds and have a fruity or floral scent,’ Kusano told Chemical & Engineering News.

The team measured amounts of chlorophyll and prolycopene, a type of carotenoid that makes tomatoes orange.

Tomatoes with a lot of prolycopene, such as dixie golden giant, had higher amounts of a volatile compound called sulcatone, which is one of the main flavours of tomatoes and delivers a fruity, slightly citrus odour. 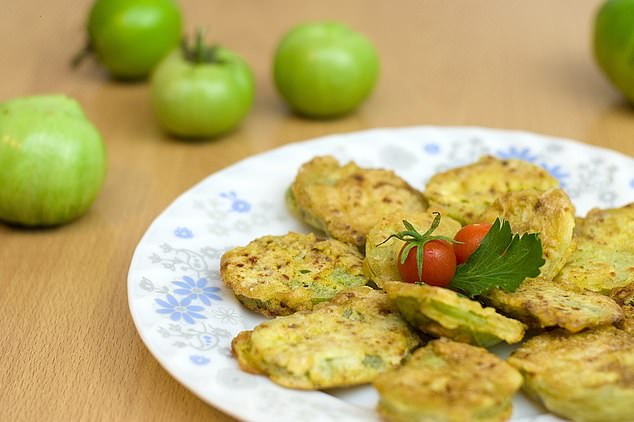 Green tomatoes also have a lower water content, so they’re well suited are suited to frying. Fried green tomatoes (pictured) is a famous US dish

Another tomato called Kellogg’s Breakfast, for its resemblance to the colour of cornflakes when ripe, also had a notably high sulcatone content.

Overall, the most pleasant to eat struck a balance between chlorophyll and prolycopene content, but weren’t necessarily the ripest varieties, the experts found.

‘Our results suggest the importance of these pigments not only as components of fruit colour but also as factors influencing flavor traits, such as sugars and aroma,’ the experts say in their paper, published in Metabolites.

Kusano also told Chemical & Engineering News that his tomatoes of choice are the Japanese variety Aiko, known for its crisp, sweet flesh, and the Maglia Rosa cherry, with its attractive mottled skin – both of which are red when fully ripe.

Fruit colour is an important factor in determining commercial value of a tomato, according to the experts at the University of Tsukuba.

Fruit colour in tomato is produced by several pigments.

The fruit wall, or pericarp, contains carotenoids and chlorophylls, while the peel primarily contains flavonoids.

When tomatoes change from green to red during ripening, various events occur, such as the accumulation of carotenoids, degradation of chlorophylls, starch decomposition into monosaccharides, reduction of organic acids, and fruit softening.

Green zebra and Aunt Ruby’s German green are two kinds of tomatoes that are green when fully ripe.

But tomatoes that progress to brown, orange or red are edible and are likely to impart a sweeter flavour.