A teenager suffers from a rare gut condition that causes her to vomit up to 30 times a day.

Nineteen-year-old Caitlin White, from Perth, Scotland, has severe gastroparesis, which causes a delay in her stomach emptying.

Ms White, who weighs just 84lbs (six stone), describes her life as being ‘dominated’ by hospital visits, where she receives daily infusions that can take up to 12 hours.

The infusions also frequently cause Ms White, who has a suppressed immune system, to develop infections, with her battling life-threatening sepsis seven times this year alone.

The teen, who is malnourished and at risk of organ failure, has been offered total parenteral nutrition (TPN) as a ‘last resort’, which delivers nutrients directly to the liver, bypassing the digestive system.

Although this would theoretically ease her vomiting, Ms White has been warned the ‘catch 22’ treatment can also cause deadly infections, as well as blood clots.

Ms White claims doctors have told her she may not be alive in six months due to the impact the illness is having on her body.

Caitlin White, 19, suffers from a gut condition that causes her to vomit up to 30 times a day. Weighing just 84lbs, Ms White is severely malnourished and at risk of organ failure 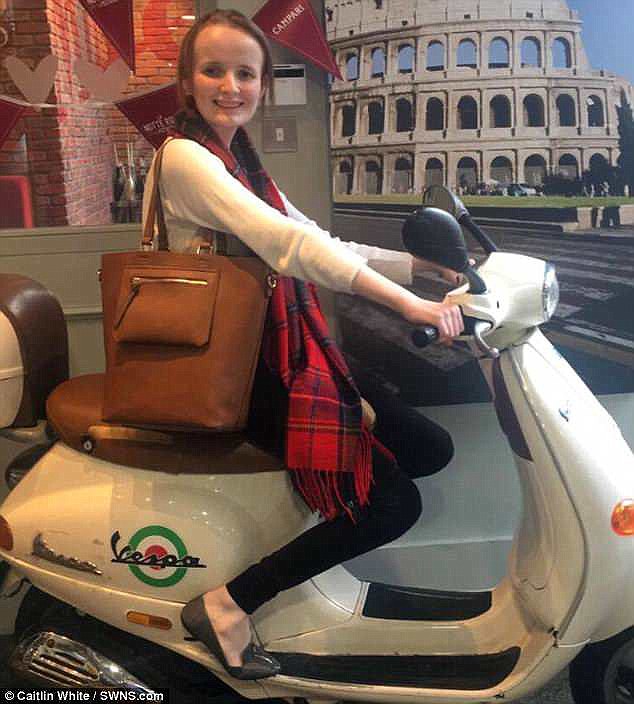 Ms White has severe gastroparesis, which is a delay in the stomach emptying.  She says her life is ‘dominated’ by hospital visits, where she receives daily infusions that take up to 12 hours

Speaking on BBC Scotland’s Kaye Adams Programme, Ms White explained how she first became ill when she was 14 and weighed 154lbs (11 stone).

Her condition quickly deteriorated, with doctors sometimes having to try 18 times to find a vein to infuse her treatment through.

As well as affecting her health, Ms White claims she has lost touch with many friends due to her near-constant vomiting leaving her barely able to socialise.

She said: ‘I wouldn’t go out for a meal or coffee with my friends anymore because I would be very embarrassed.’

As well as reducing her quality of life, her condition could mean Ms White does not have long left.

She said: ‘They don’t think I’ll be here in six months unless we get proper care.’

Yet, despite her prognosis, Ms White remains optimistic that her health will one day improve and hopes she will then be able to travel or pursue a career in medicine. 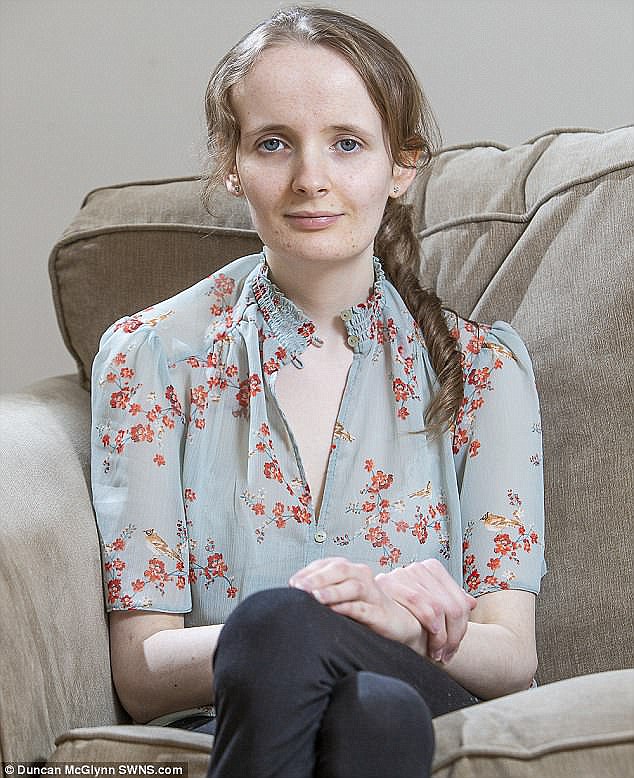 The infusions can cause infections, with Ms White, who has a suppressed immune system, battling sepsis seven times this year alone. Doctors are considering an alternative treatment that delivers nutrients to her liver, however, this can lead to both infections and blood clots 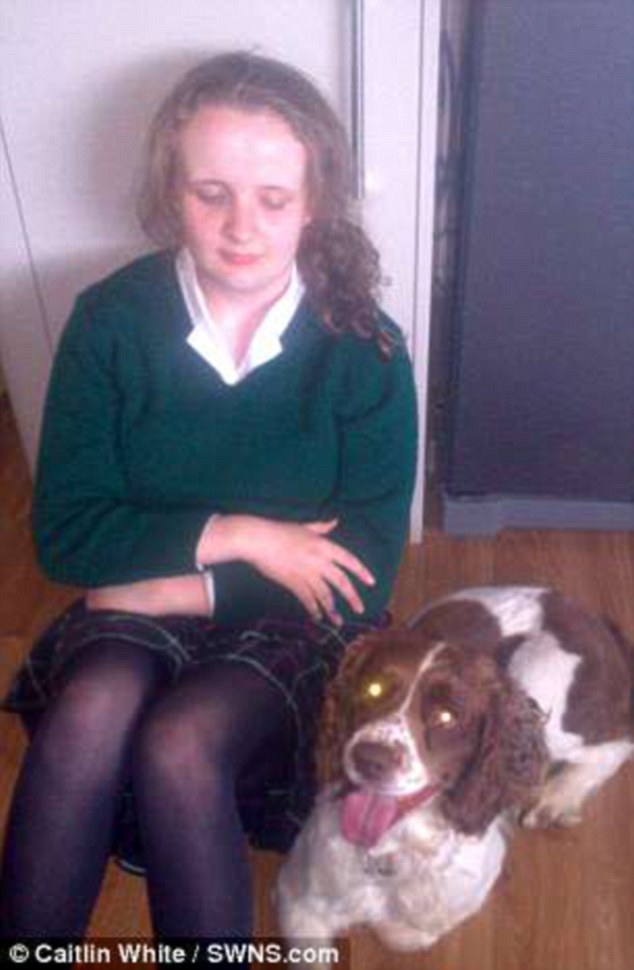 Ms White first became ill at 14, with her since losing 70lbs. She has abandoned her dream of being a lawyer or a teacher and has also fallen out of contact with many friends

At risk of infections, malnutrition and organ failure

Ms White recently met with a consultant in Glasgow who advised TPN as a potential treatment.

Although the treatment may ease her vomiting, doctors worry about how Ms White’s gut health may be affected if nutrients are delivered directly to her liver.

Speaking of TPN, an unnamed medic said: ‘It’s not something that is realistically achievable for many years without some risk of complication.’

Ms White added: ‘If they decide to give me feed [into my gut] I’m at high risk of “re-feeding syndrome”, infections and blood clots.

‘But if they don’t do it, I am also at risk of infection. I’m malnourished as it is, and there’s [the risk of] organ failure as well.’

Re-feeding syndrome can occur if starved or severely malnourished patients receive artificial food. This can cause life-threatening shifts in a patient’s fluid and electrolyte levels.

Dr Neil Jamieson, a gastroenterologist at Raigmore Hospital, Inverness, claims gastroparesis is a very difficult condition to treat, largely due to patients often being young and losing their independence.

The condition tends to affect diabetics when the nerves in their stomachs become damaged.

Triggering the nervous system to work as it should can be very difficult, Dr Jamieson added. 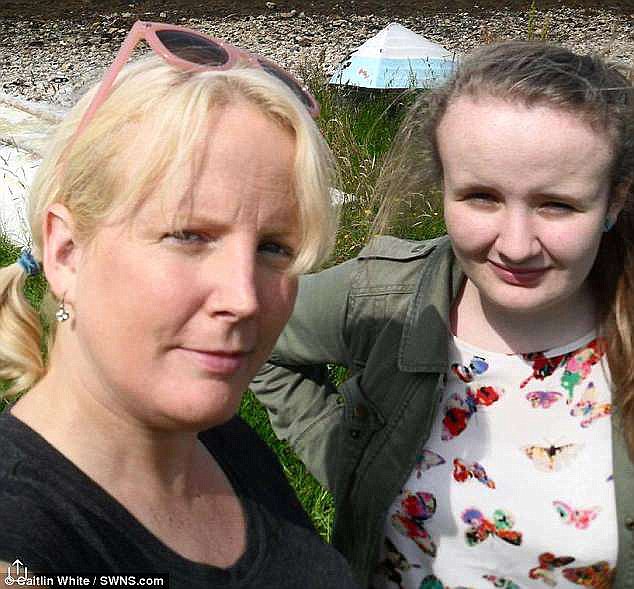 Ms White (believed to be pictured with her mother) claims doctors have told her she may not be alive in six months time. It is unclear if this is due to malnutrition or organ failure 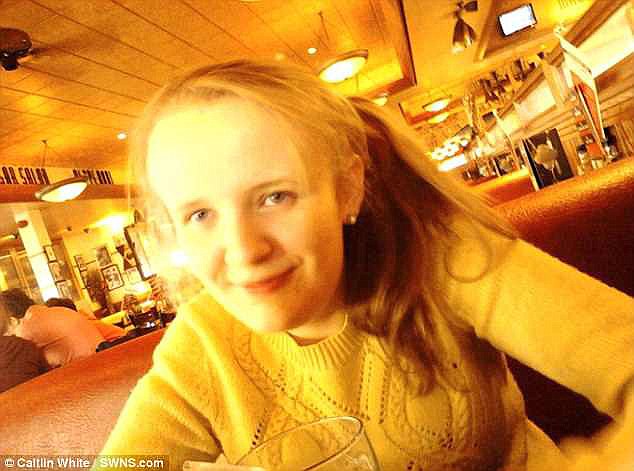 Despite her disorder, Ms White is optimistic her health will improve and she can one day travel