Buddy Franklin appeared to be a no-show at teammate Josh Kennedy’s emotional retirement announcement, as speculation continues to mount that he will leave the club at the end of the season.

Teammates rallied around Kennedy as he was moved to tears describing his ‘incredible journey’ in footy, with many rushing to hug him after his heartwarming speech.

Franklin, however, was not one of them.

His apparent absence from what was an important moment for the 290-game club stalwart came a day after he was lashed by outspoken pundit Kane Cornes for his ‘me, me, me’ approach to contract negotiations.

An extensive search of footage of the announcement and deep dive through news and social media to try and uncover any reasons why Franklin might not be present came up with nothing. 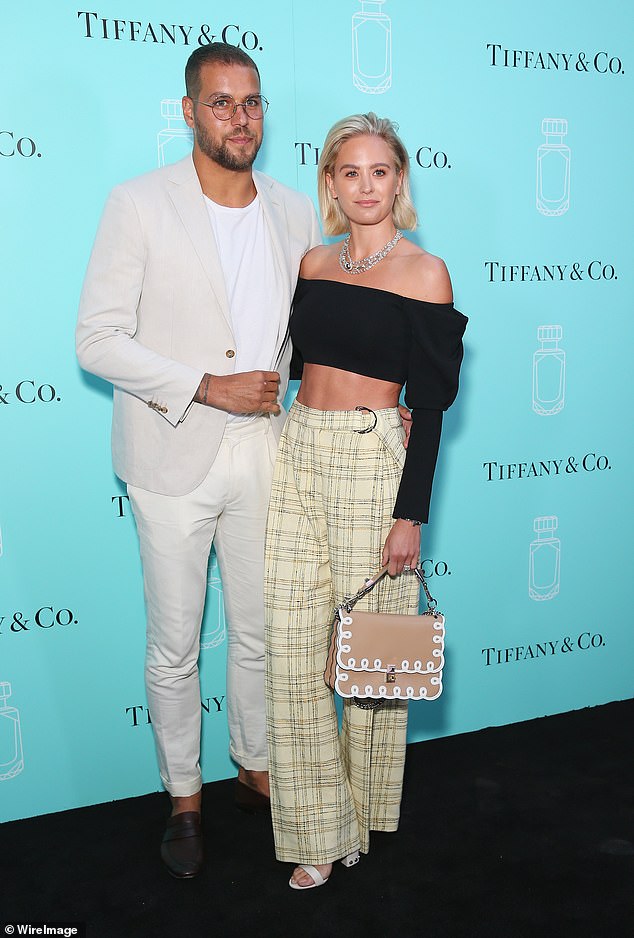 Lance Franklin and wife Jesinta, who have two children, are considering leaving Sydney to be closer to their families

Franklin released a statement on Saturday, prior to his side’s clash with the Kangaroos on Sunday – which they duly won by 38 points after Franklin kicked four goals.

‘At this stage conversations have been paused around my contract so I can put all my focus on playing footy,’ he said in a statement released by manager Adam Finch.

‘No further comment will be made until the season is done and I have decided about my future.

‘I am still undecided and need time after the season to make a family decision about whether I continue to play next year,’ Franklin said in the statement.

Cornes smashed the timing of the announcement, which was released as the Swans travelled to Melbourne for the game.

‘It was a very ‘me, me, me’ thing to do, I thought, from Buddy Franklin, when the Sydney Swans are flying,’ he said on Channel 9.

‘I’m not sure you need to release a statement prior to the game. What was the point of Buddy doing that?

‘It didn’t alleviate any of the talk … it made the talk fester more,’ Cornes said of the contract talk. 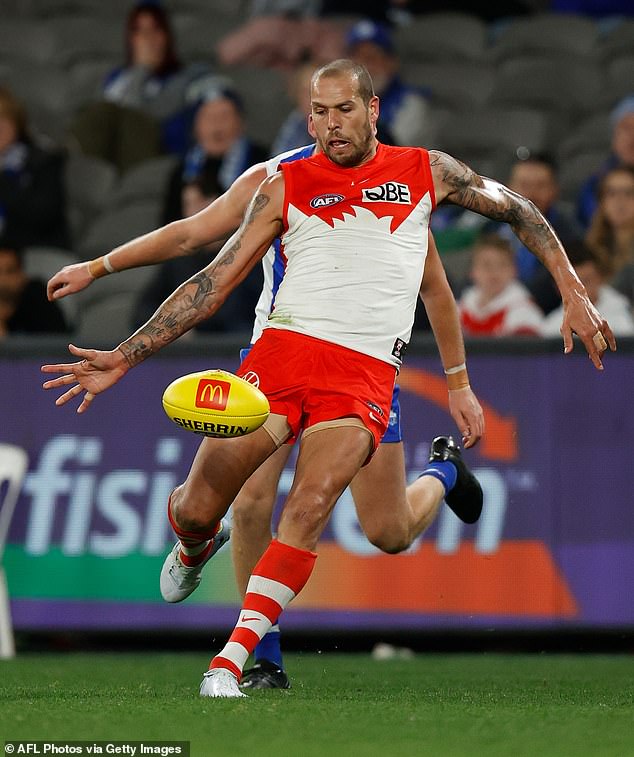 It came after intense speculation Franklin will be leaving Sydney at the end of the season, after the club reportedly ‘low-balled’ him with a contract offer worth just $500,000 a year.

The 35-year-old has been on a nine-year $10million contract since his highly-publicised move from Hawthorn.

Strong rumours have linked the two-time premiership player to Brisbane, with Franklin’s wife Jesinta reportedly keen to move closer to her family.

The couple have one son, Rocky, and a daughter, Tullulah. 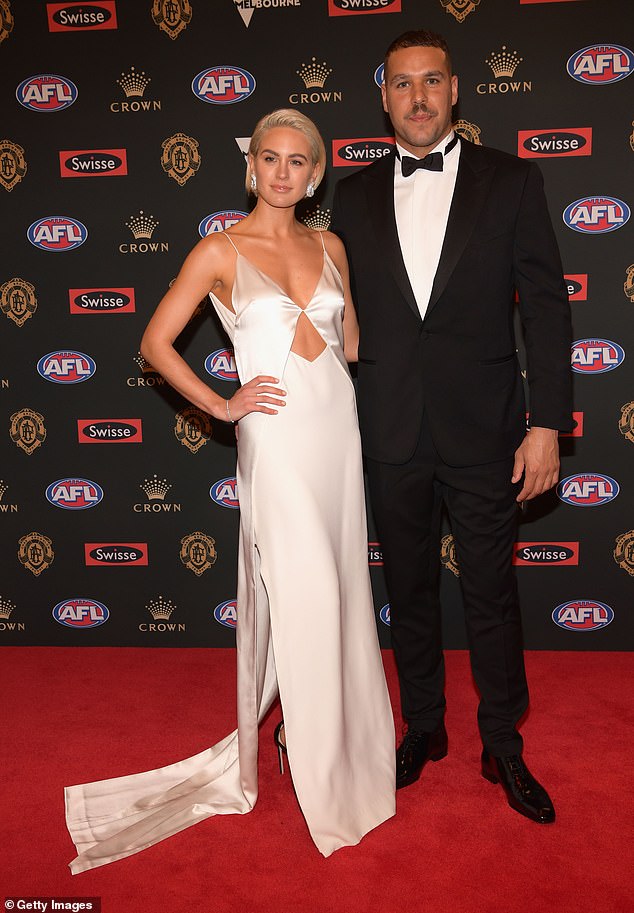 Lance and Jesinta Franklin are reportedly considered moving away from Sydney, with Lance’s contract expiring at the end of the season

The constant speculation around whether Franklin will be at the club next year or not has overshadowed the news that Kennedy will retire at the end of the season.

The three-time All Australian and 2012 premiership player has played 276 matches for the Swans after previously been drafted as a father-son recruit by Hawthorn, where he played 13 games.

He also finished third in the 2017 Brownlow Medal, and has been one of the AFL’s top contested midfielders over the past decade. 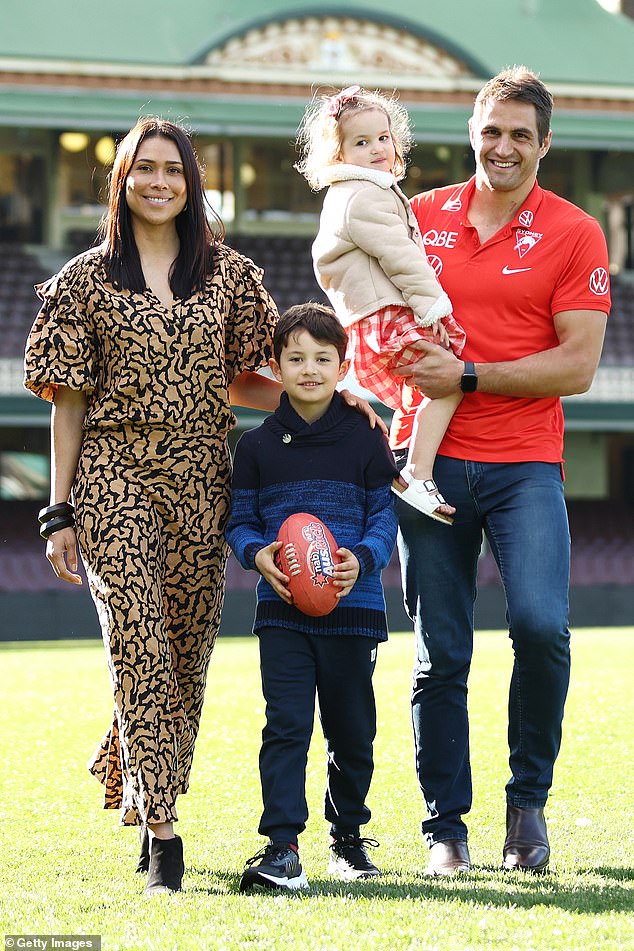 Kennedy was overcome with his emotion as he told his teammates that he was retiring, so much so his son asked ‘Are you ok Dad?’, much to the delight of the room.

’13 years ago when I turned up (at the Swans after moving from Hawthorn) … at the reception downstairs, I could tell that I’d landed somewhere pretty special. Thank you everyone,’ said Kennedy as his eyes brimmed with tears.

The 34-year-old made the decision last week, just days later after injuring his left hamstring while playing in the VFL.

Kennedy missed eight weeks earlier this season after tearing his right hamstring, and even the man himself does not know whether he will be able to play another game for the Swans, who are expected to have a decent crack in the finals. 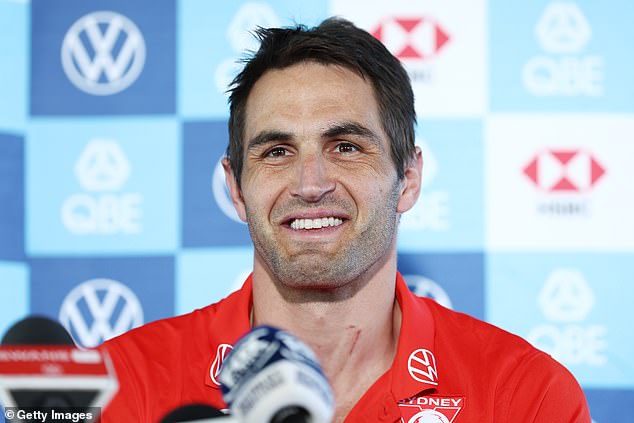 ‘It’s a hope, not an expectation,’ Kennedy said at the press conference when asked whether he’d be able to play again this year.

‘If it doesn’t happen it doesn’t change anything. I’ve got nothing but love and admiration for the footy club.

‘I’m very content with where I sit right now. At least I’d love to finish the year and train and feel part of it that way,’ said Kennedy.

The Swans, who sit fourth on the ladder with three rounds remaining, play Collingwood on Sunday afternoon in what will be an absolutely blockbuster clash at the SCG.