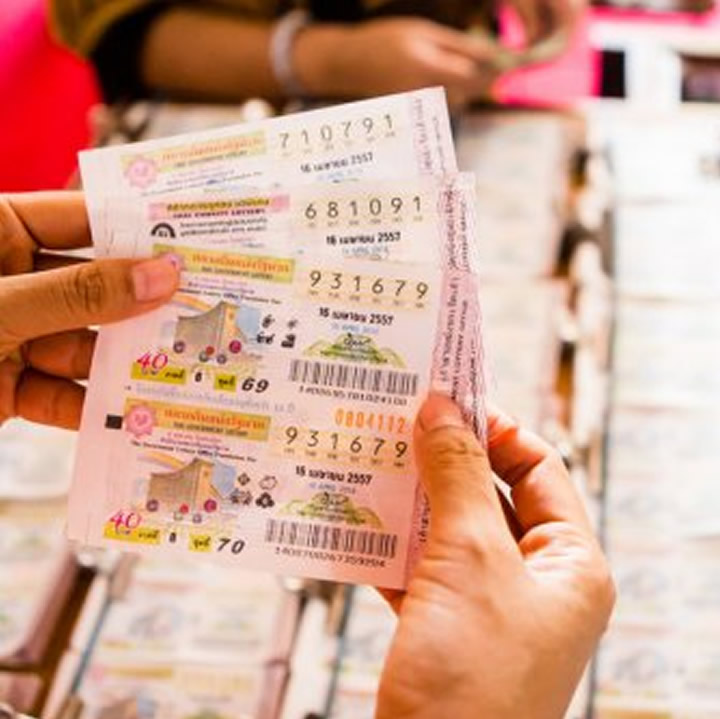 In Thailand, all kinds of gambling are prohibited, but almost every Thai at least once in his life tried to catch luck and bought the lottery. The lottery results are known every month on the 1st and 16th.

Everywhere, from one place to another, there are merchants with wooden stalls with tickets in their hands. They can be seen almost everywhere.

According to the superstitious Thais, if in a dream you saw the Thai royal family members, then you should buy a ticket for the state lottery with the number 9 to hit a big jackpot.

The fact that lottery tickets are sold mainly in catering establishments is no accident. Thais have a belief: a chance for a big win will become possible precisely when a person who is at a richly set table tries his luck.

The people of Thailand even believe in very unusual omens. For example, if you managed to miraculously avoid a collision with a car, then be sure to remember its number. This can be a winning combination. And in general, in the Thai lottery, the most important thing is to predict the lucky numbers.

Some use the services of a fortune-teller monk who does just that. Some even recommend meditation as the best way to see a winning number combination with the intuitive third eye. Allegedly, it is spiritual practices that bestow revelation.

In Thailand, a whole system of dream interpretation has been developed using specialized literature. For example, a certain dish of traditional cuisine or a local landmark is seen in a dream has its own number.

Therefore, in this way, Thais are trying to see in dreams those combinations of numbers that will help them get at least a little rich. Foreigners are amazed that even after the death of a loved one or a relative, a Thai person buys a ticket with a number that matches the age of the deceased.

The date of birth of the politician or the number of the car purchased the day before are other possible winning combinations for the Thai. In general, the locals, in any, even spontaneous events, try to look for happy omens that will help make their lives at least a little more secure.

The state itself encourages the participation of the population in the sweepstakes. The oldest and most widely trusted Thai lottery is the Thailand Government Lottery. To purchase a genuine ticket, you need to check for a watermark on it. In addition, they are all printed on paper similar to a single sample. So it’s almost impossible to fake a lottery.

One ticket will cost 100-120 baht. It all depends on the individual markup that the seller pledges. Each ticket is a piece of paper with two parts joined together, on each of which a person experiencing a happy fate will find six numbers. As already mentioned, new tickets are printed twice a month – on the 1st and 16th.

If you followed all the recommendations, carefully followed all the “signs of fate” and did not lose sight of any important nuance, then you are likely lucky. At least, experienced experts say so.

The results of the drawing can be found in different ways: with the help of print media, on local TV channels, or on the website which can be easily found on the back of the ticket.

If someone is still lucky and became the happy owner of a decent sum, you need to contact GLO Bangkok (Government Lottery Office) to get a check. This is if the winning amount is more than 20 thousand baht. To collect a lower amount, all you have to do is contact your local agency and get the cash.

Thais might seem to take the lottery very seriously. In fact, everything looks much simpler. Thais love all sorts of cute rituals, so they follow the signs. The Thais themselves say that the Thai lottery is a joke, and they just like to calculate and guess.

Such an easy attitude to the Thai lottery, among other things, is the merit of the state itself. There are various additional numbers and pictures on the lottery ticket, which can also be associated with some ridiculous “sign of fate”.

Gambling is prohibited in Thailand. The exception is only for horse racing and government-sponsored Thai Lotteries. The ban comes from the Gambling Act of 1935. However, illegal casinos and other forms of gambling are managed in Bangkok and some provincial cities.

Despite the country’s strict gambling ban, the gambling rate in Thailand is on the rise. According to a recent report compiled by the Center for Social and Business Development and Center of Gambling Studies, 57% of the Thai population gambled over the past year in online casinos, played online slots (“เว็บสล็อตเว็บตรง“), roulette, participated in sports bets and other gambling activities.