The three key rules to follow to avoid food poisoning

For the thrifty among us, the response to seeing mould on the edge of our bread is to cut that bit off and keep the rest.

But experts at Australian consumer organisation Choice have warned that eating mouldy bread – even the parts not visibly affected – is one of the most common ways of contracting food poisoning.

This was just one piece of handy advice shared by the association, which recently published an information guide on food poisoning prevention and myths.

At the top of the recommendations is avoiding the temperature ‘danger zone’ – when food is kept between 5C and 60C.

Bacteria can grow and multiply when left either above or below those temperatures, so food must be refrigerated, and warm food must be thoroughly heated before eating.

Cross-contamination was cited as another way that germs can thrive – with common offenders being raw meat and unwashed fruit and vegetables coming in contact with other foods.

How can you avoid food poisoning?

The three rules to remember are to avoid the temperature danger zone of between 5 degrees and 60 degrees, to avoid cross-contamination and to always toss it out if there is any doubt.

– Frozen vegetables that are frozen solid may have been semi-thawed and refrozen, making them hazardous

‘The smell of putrefaction is usually due to relatively harmless bacteria called pseudomonas. So it might not be obvious that food’s contaminated,’ Choice said.

For those inclined to keeping food after trimming off the mouldy bits, the advice was simply to toss that food out.

This is due to the mould’s invisibility which can, unknowingly to many, produce dangerous toxins. 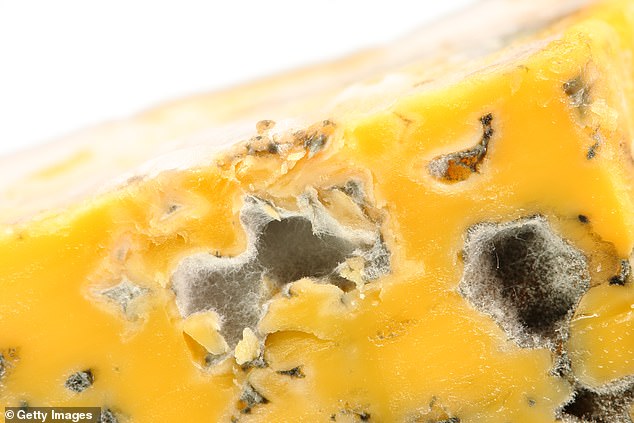 Toasting the bread can kill the mould, but it won’t harm the toxins that are already present.

Mouldy cheese should also be treated carefully, aside from the kinds that are meant to include some mould.

As a general rule, the cheese should be cut around one centimetre from the mould to avoid potential damage to the immune system, liver or kidneys. 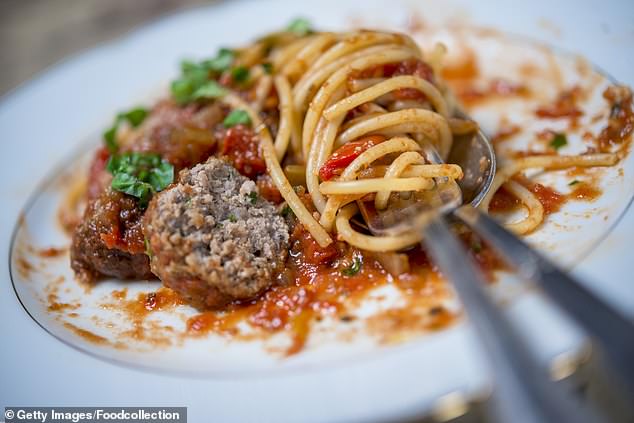 Additionally, leftovers of a different sort were also dressed down and recommended to be binned after no more than three days – including culinary classic, spaghetti bolognese

Additionally, leftovers were also dressed down and recommended to be binned after no more than three days.

This includes spaghetti bolognese, which should be binned it has time to cool after cooking and otherwise kept refrigerated in a clean and covered container.

When it came to rice, a ‘risky food’, the experts advised to keep it in the fridge for ‘no more than a couple of days’.

‘Raw rice can contain bacteria called Bacillus cereus, which can survive cooking and can cause serious food poisoning. If cooked rice is left too long at room temperature or in a too warm fridge, the bacteria can multiply,’ they said.

‘B cereus produces toxins that aren’t killed by reheating, so reheating dodgy rice won’t help. So, if you’re storing cooked rice, cool it quickly, keep it in the fridge – and make sure your fridge is cold enough (4°C or lower).’