We’ve have all heard about the weird and wacky pregnancy cravings women experience. From ice cream and pickles to a packet of hot chips at midnight, many mothers to be find themselves out-of-control with strange food urges.

But what actually causes them and how can you overcome these bizarre dietary desires?

Dietitian Melanie McGrice has revealed the three most common reasons why women have cravings during pregnancy and what to do about them.

Melanie said if you’re craving a food that is high in salt such as vegemite, potato chips or tomato soup, then you may be dehydrated.

‘Our fluid volume increases by approximately 150 per cent during pregnancy – which is part of the reason that later in your pregnancy you may notice your feet and fingers swelling,’ she said on her blog.

‘The main reason for this is that we need so much extra blood, to feed and nourish our baby, and of course, blood and your amniotic sac that your baby is resting in, are essentially fluid. In fact, most women put on at least two kilograms of fluid in the first trimester alone. 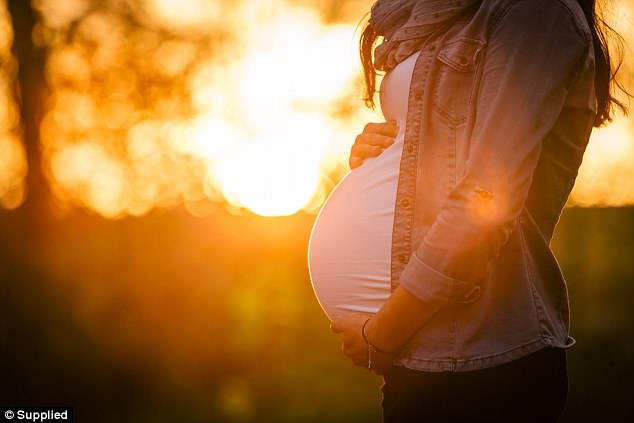 Melanie said if you’re craving a food that is high in salt such as vegemite, potato chips or tomato soup, then you may be dehydrated (stock image)

Salt helps our body to retain more fluid and according to Melanie that’s precisely the reason why athletes drink salty sports drinks when they’re competing in marathons.

‘If you’re not drinking enough water, there’s a good chance that your body will crave salty foods to help you drink more water and retain more fluid,’ she said.

So, what should you do if you’re craving salty foods?

‘Well, it might sound counter-intuitive, but the best idea is to drink more water,’ explained Melanie.

‘If you are going to have salty foods, try to get your salt intake from healthier foods such as sardines, salted nuts or soy sauce over some veggies instead of potato chips or pizza.’ 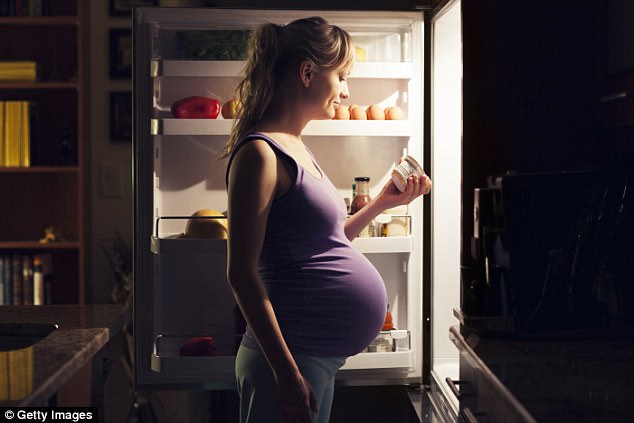 Dehydration, lack of iron and not eating regularly enough can all cause cravings (stock image)

According to Melanie, our iron requirements sky-rocket during pregnancy, particularly, during the second and third trimesters.

‘When we’re low in iron, we can become extremely exhausted,’ she said.

‘In extreme cases you can even develop a condition called pica whereby you crave really weird things like dirt.’

So, if you’re craving high-iron foods such as red meat, fish and spinach, see your doctor to get your iron levels checked.

Melanie also said to look at the nutritional supplements that you’re taking. 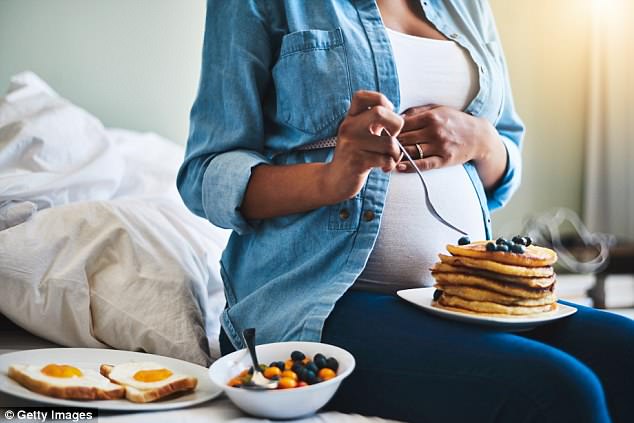 ‘If you’re not taking a supplement, or yours is too low in iron, you may struggle to achieve your requirements with diet alone,’ she explained.

‘However, some supplements can be too high in iron and cause nausea or constipation – so just like baby bear in the story of the three bears, you need one that is just right for you, and your needs.’

It’s no secret that your appetite can increase during pregnancy.

‘If you try to eat the way you used to eat, skipping snacks, and having late meals because you’re caught up with other priorities, there’s a good chance that you’ll crave sugary foods,’ said Melanie.

‘The problem is that sugary foods can cause a lot of excess weight gain, and they’re often low in nutrition.’

If you’re reaching for biscuits, ice cream or other foods high in sugar, Melanie said to ensure you’re eating a nutritious meal or snack every three to five hours.

‘Opt for low GI foods such as wholegrain crackers or a tub of yoghurt,’ she said.