Onstage, with their arms outstretched, heads thrown back and soaring, golden, voices articulating the language of love, the Three Tenors — Luciano Pavarotti, Jose Carreras and Placido Domingo — were feted as the ‘very soul of romance’.

In the 1990s and early 2000s, they were the world’s most famous (and, in Pavarotti’s case, well-fed) opera singers who were adept at transporting their fans to a higher plane, a place of passion, joy or longing and of exquisite beauty expressed through words and music.

Offstage, however, it seems that it was a different story.

Pavarotti was a serial philanderer, Carreras had a tortuously tangled love life, and this week sees Placido Domingo embroiled in a raft of historical sexual assault allegations made by at least nine women — all of which, it must be said, he strongly denies. Here, JANE FRYER lifts the lid on three sexually voracious stars who used their extraordinary talent, power and wealth to take advantage of their fans, colleagues and, most of all, their extremely long-suffering wives.

ACT ONE: WILL PLACIDO HAVE TO FACE THE MUSIC?

The Spanish-born multiple Grammy-winning tenor is described by colleagues as a man of prodigious charm and energy, the most prolific opera singer in history, who continues to attract sell-out crowds at the most prestigious opera houses around the world.

He will return to Covent Garden in June 2020 in a revival of Verdi’s Don Carlo — or will he?

For this week, eight singers and a dancer claimed to have been sexually harassed by the 78-year-old tenor dating back to the 1980s, mostly during his tenures as director of the Los Angeles and Washington Operas.

One woman claimed Domingo put his hand down her skirt. Three others said he forced wet kisses on their lips. Two singers admitted that they felt they had to have sex with the star for the sake of their careers.

A further six women claim Domingo made them uncomfortable, including one singer who said he repeatedly asked her out on dates after hiring her to sing at a series of concerts with him in the 1990s. 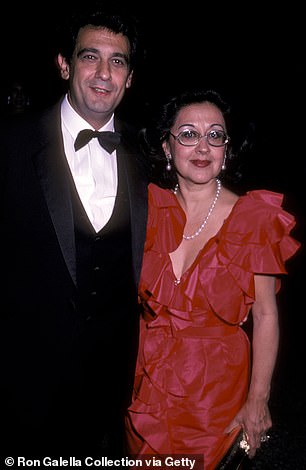 Mezzo-soprano Patricia Wulf said while Domingo didn’t physically touch her, he would come up close to her each time she walked offstage and ask if she ‘had to go home tonight?’

Another woman who had sex with the singer in Los Angeles claimed he left $10 (about £8) on a chest of drawers, saying: ‘I don’t want you to feel like a prostitute, but I also don’t want you to have to pay to park.’

The incidents apparently took place in a dressing room, a hotel room, during a meeting and at opera companies where Domingo held managerial positions.

As one woman put it: ‘A business lunch is not strange. Somebody trying to hold your hand during a business lunch is strange or putting their hand on your knee is a little strange. He was always touching you in some way, and always kissing you.’

Dozens of witnesses claim that Domingo’s womanising has been an open secret for decades and that women were warned to avoid him and ‘definitely don’t be alone with him’.

He was allegedly known for trying to pressure them into sexual relationships by dangling jobs and then punishing the women professionally when they refused his advances.

The singer has not restricted his affections to colleagues and fellow performers. He reportedly also ‘had a pop’ at Princess Diana who, according to a friend, was ‘rather taken aback’ by his advances.

The pair met several times over the years, including at a gala tribute to Margot Fonteyn at the Royal Opera House in 1990.

Domingo — whose motto is, ‘If I rest, I rust’ — has denied the recent accusations and the Los Angeles Opera — which he directs — has pledged to investigate with the help of ‘outside counsel’.

‘The allegations from these unnamed individuals dating back as many as 30 years are deeply troubling and, as presented, inaccurate,’ Domingo said in a statement this week, ‘Still, it is painful to hear that I may have upset anyone or made them feel uncomfortable — no matter how long ago and despite my best intentions.

‘I believed that all of my inter-actions and relationships were always welcomed and consensual. People who know me or who have worked with me know that I am not someone who would intentionally harm, offend, or embarrass anyone.

‘However, I recognise that the rules and standards by which we are — and should be — measured against today are very different than they were in the past. I am blessed and privileged to have had a more than 50-year career in opera and will hold myself to the highest standards.’

Domingo has been married to his second wife, Mexican soprano Marta Ornelas, 84, since 1962 and credits her with ‘guiding’ his career. They have two sons — Placido Domingo Jr, 53, and Alvaro Maurizio, 50.

Domingo also has an elder son — Jose Placido Domingo Guerra — from his first, brief, union with fellow music student Ana Maria Guerra Cué, whom he wed when he was 16. 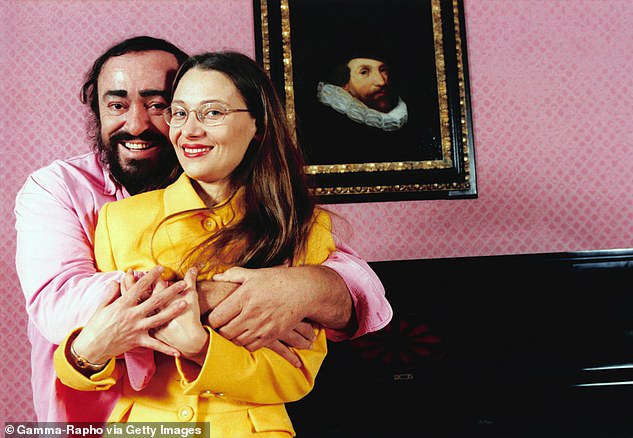 Panda hug: Pavarotti and his future wife Nicoletta Mantovani. It was Italy’s Pavarotti who stole the show after organising the first Three Tenors concert alongside Domingo and Carreras on July 7, 1990, as part of celebrations for the World Cup in Rome

It was Italy’s Pavarotti who stole the show after organising the first Three Tenors concert alongside Domingo and Carreras on July 7, 1990, as part of celebrations for the World Cup in Rome.

Ever the showman, his onstage tomfoolery and sweaty flamboyance with a twirling handkerchief made him a global superstar.

And just as Pavarotti was not the sort to restrict himself to one course at dinner — he once ate 23 main courses in one sitting — he was never going to be monogamous.

Friends say he believed that with his ‘God-given talent’ came a God-given right to take what he wanted.

So despite being grotesquely overweight for most of his life — at times tipping 150 kilos — and often appearing rather grubby thanks to his habit of darkening his beard, moustache and ever-expanding bald spot with burnt cork, Pavarotti was a relentless womaniser.

He was notorious for arriving at a music venue and immediately hotfooting it to his dressing room with female members of the supporting cast, emerging only for his performance.

If his prey wasn’t seduced by the fame, fortune and extraordinary charisma, he would simply laugh, wink and quip ‘only joking!’

For 36 years, wife Adua turned a blind eye to his longer affairs with a series of ‘secretaries-cum-girlfriends’ who ministered to her husband’s every need while she brought up their three daughters, Lorenza, Cristina and Giuliana, at the family home in Modena.

She didn’t even blanch at his eight-year affair with student soprano Madelyn Renee, whom he met in 1979 while giving a masterclass in New York at the Juilliard School and promptly moved into his Central Park apartment as his ‘secretary’.

As Andrea Strata, Pavarotti’s dietitian and personal doctor, said: ‘Pavarotti had many adventures. But then again, he was a man who travelled alone a lot and fans threw themselves at his feet. Adua showed much fair play.’

Or, as Adua put it herself: ‘Luciano may look at other bowls of pasta during his travels, but he knows there is still plenty of linguine at home.’

But the linguine finally snapped in 1996 when an Italian magazine published photos of her husband canoodling with Nicoletta Mantovani on a holiday in Barbados along with his announcement: ‘She is the favourite in my harem!’

When they met, Nicoletta was a natural sciences student at Bologna University. She had a holiday job at an equestrian event, where keen horseman Pavarotti spotted her. She was 23; he was 57.

‘At the beginning I told everyone I was the assistant, but that was not true,’ she said. ‘It’s not easy to say I’m in a relationship with a man 34 years older. Luciano was my great defender. He was always protecting me.’

But divorce did not mellow him. Soon after he and Adua formally parted in 2000, Pavarotti praised the virtues of Viagra to journalists and said: ‘Sex is always good for you if your little friend asks for it. It doesn’t matter if it is before or after the show. The best thing would be during the show, on the only table on the stage.’

Thankfully, no audience had to witness this although, in 2003, he and Nicoletta married on the stage of the opera house at Modena in a lavish ceremony attended by more than 500 guests including Sting, Donatella Versace, Andrea Bocelli, Gina Lollobrigida and Bono.

Theirs was, apparently, a great love. Nicoletta was the only one who could stop him eating — albeit temporarily — by yelling ‘basta!’ (enough!) at him. And they went on to have a daughter, Alice, upon whom Pavarotti doted.

But once a philanderer, always a philanderer — so despite his vast girth and failing health, he and Nicoletta very nearly split in 2006.

Even as he lay dying from pancreatic cancer, Pavarotti didn’t let up. So when Adua visited him to say farewell, he flirted with her, told her she was ‘beautiful’ and somehow persuaded her to rustle him up his favourite meal of spaghetti Bolognese. He died in September 2007, aged 71.

As his manager Herbert Breslin put it: ‘Pavarotti loved music, women, food and football — in that order.’ Speaking in the new documentary, Pavarotti, released last month, Nicoletta says: ‘I live for his memory. What I miss most is his panda hugs.’ 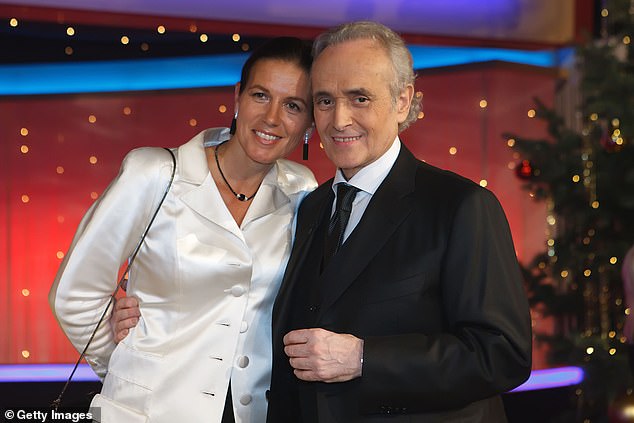 Doors to manual: Jose Carreras and Jutta Jager. Small, dark, fantastically handsome with amazing chocolately-brown eyes, Carreras was the ‘clever’ one of the Three Tenors

Small, dark, fantastically handsome with amazing chocolately-brown eyes, Carreras was the ‘clever’ one of the Three Tenors.

While the 72-year-old Spaniard cannot really compete in the same league as his philandering fellow tenors, he has admitted to having reached ‘a civilised arrangement’ with his first wife, Mercedes Perez (with whom he has two children, Alberto and Julia).

In the early Eighties, and while Mercedes obligingly ‘looked the other way’, he started a passionate affair with Jutta Jager, an Austrian former air hostess, to whom he would sing Elton John and Phil Collins songs (two of his favourite composers) in the shower.

And when, in 1987, aged 40, he was diagnosed with acute lymphoblastic leukaemia and given a 10 per cent chance of survival, the two women gamely took turns to sit by his hospital bed, braced for the worst.

But Carreras recovered, made a triumphant return to Barcelona’s opera house, and went public with Jutta. Finally, in 1992, Mercedes divorced him.

However, Carreras dithered over making an honest woman of Jutta, she left him, and the following year married an Austrian businessman with whom she had three sons.

And that was that, until 2004, when their paths crossed again in Vienna and, both single again, they secretly married. So all’s well that ends well. Unless you’re Mercedes, of course.

While Carreras remained sanguine about his tangled love life — ‘I had been a bit selfish’ — his brush with death changed him for ever, and he set up the José Carreras International Leukaemia Foundation, which gives away £7 million a year in research grants and runs Spain’s bone-marrow register.