It is the accommodation site that has ‘changed the way we stay’. But, while most rentals are problem-free, some Airbnb listings come with an unexpected ‘bump’ in the night.

In fact, many of the platform’s spookier options have been dubbed ‘haunted’ by guests and owners alike, who claim spine-chilling supernatural activity render their properties extra special.

So, if you’re feeling brave, here’s a selection of the top 10 with paranormal allure – and what you may encounter as a guest… 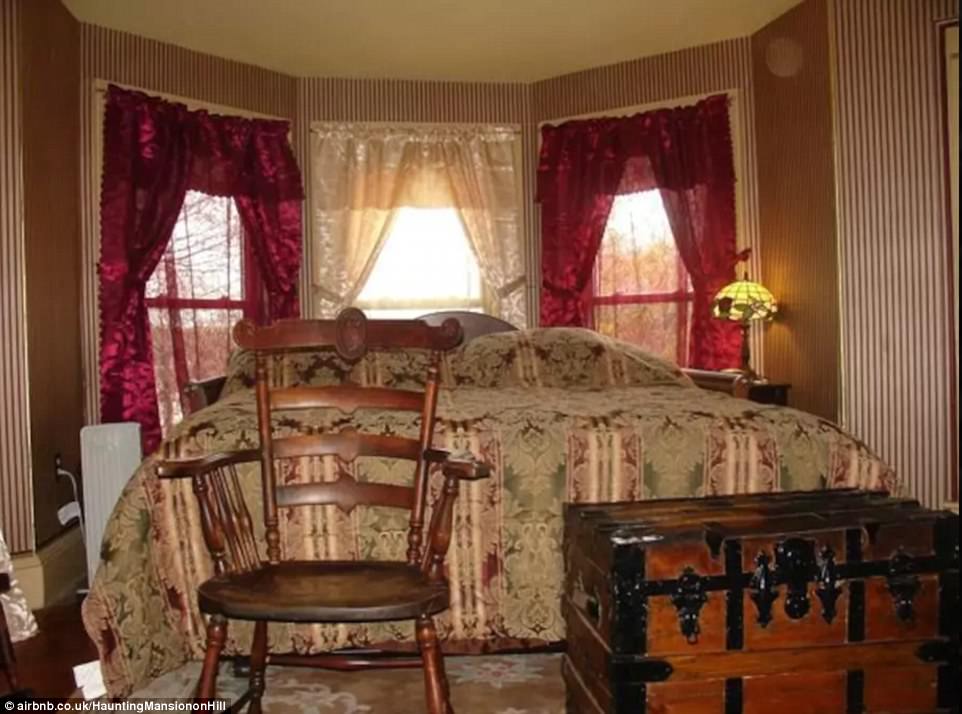 Bump in the night: Although it looks haunted, guests are yet to cite specific sightings in the Stephen King-esque abode 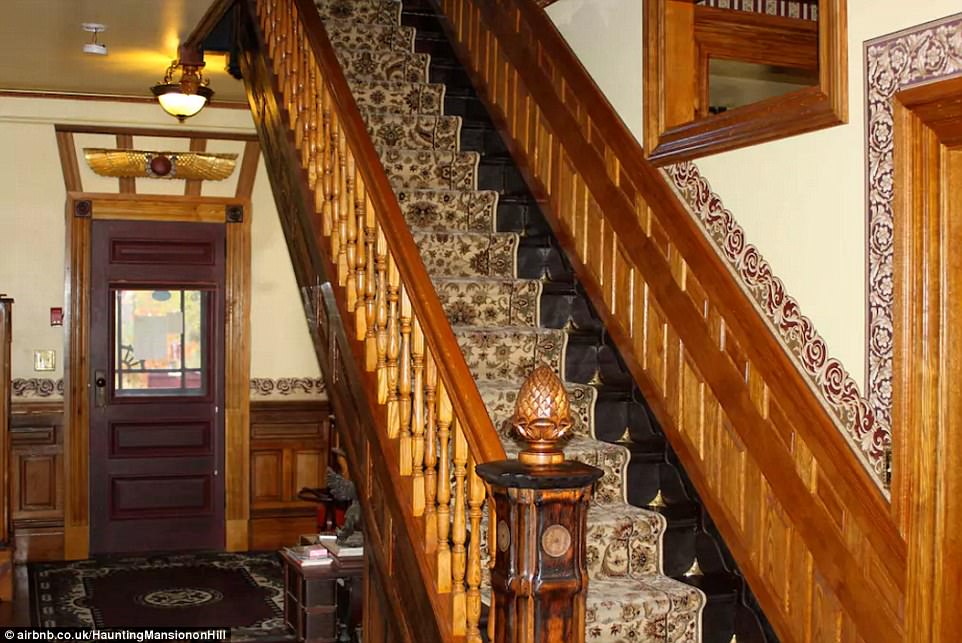 Maine attraction: The stunning Victorian property was actually a former US Senator’s mansion and looks frozen in time

It may look like the set of a horror film, but this Victorian-era mansion is actually a fully-functioning B&B.

Private and somewhat secluded on a tree-lined hill in Maine’s Guilford, it practically screams paranormal activity – although guests are yet to cite specific sightings in the Stephen King-esque abode.

The property was actually a former US Senator’s mansion, so likely has plenty of scope for scream-inducing shenanigans, but is now available for brave tourists from just £31 per night.

It has five bedrooms and 12 beds in total, which can accommodate a maximum of 16 people. 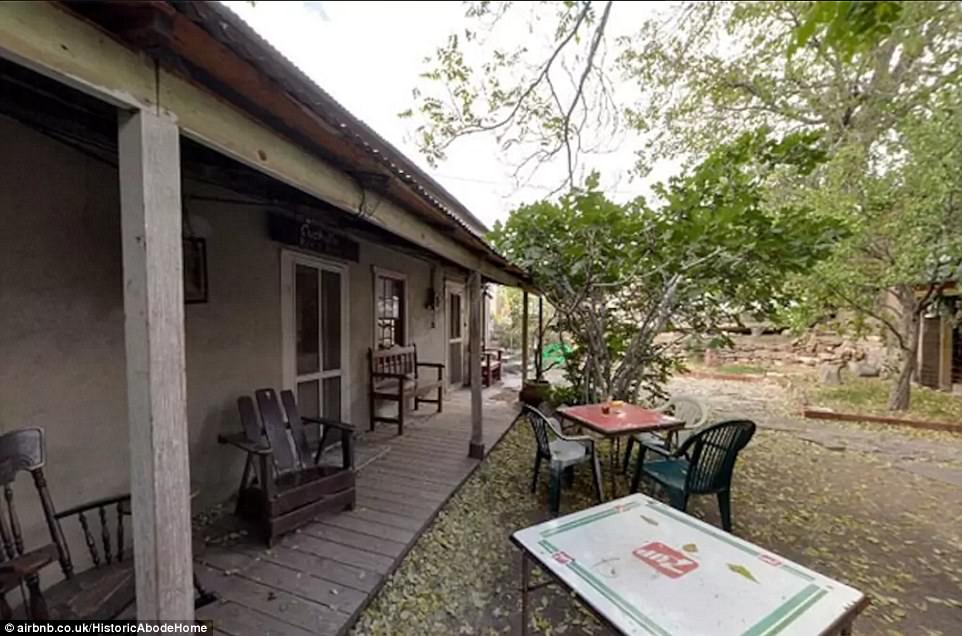 Secluded spot: Located near a city called Truth or Consequences, this New Mexico property is literally part of a ghost town 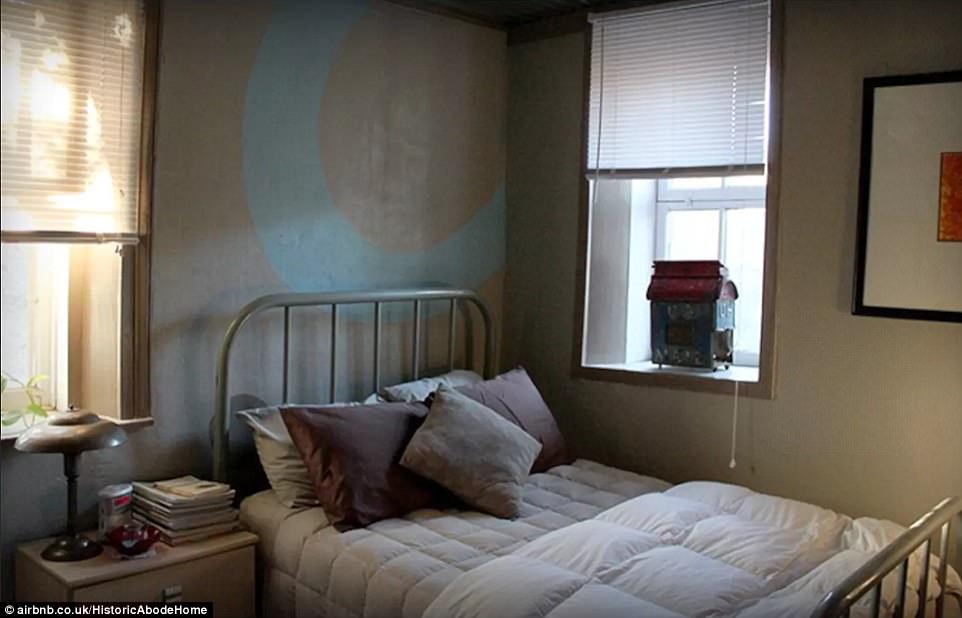 Past lives: The site served as a stagecoach stop in the 1800s, where tired travellers would come to rest their weary heads 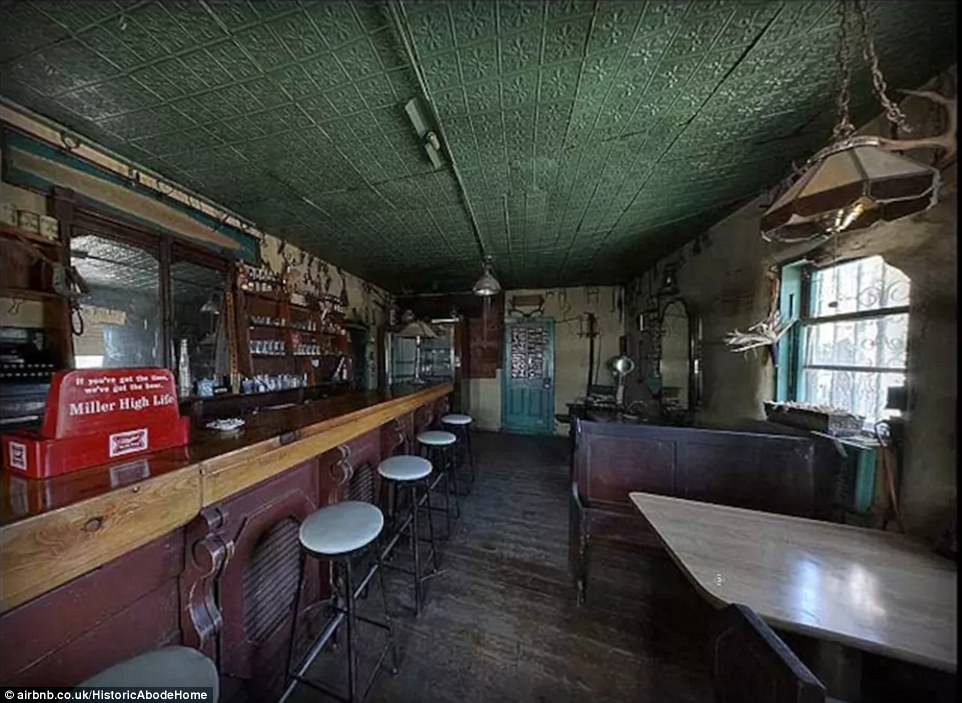 Eerily quiet: Guests will enjoy a rare opportunity to be away from the crowds in this historic space

Located near a city called Truth or Consequences, this New Mexico property is literally part of a ghost town.

Drenched in history, it served as a stagecoach stop in the 1800s, where tired travellers would come to rest their weary heads.

Now, modern-day tourists can do the same – complete with decor from back in the day and an eerie sense of being alone. Just don’t assume you’re the only residents… 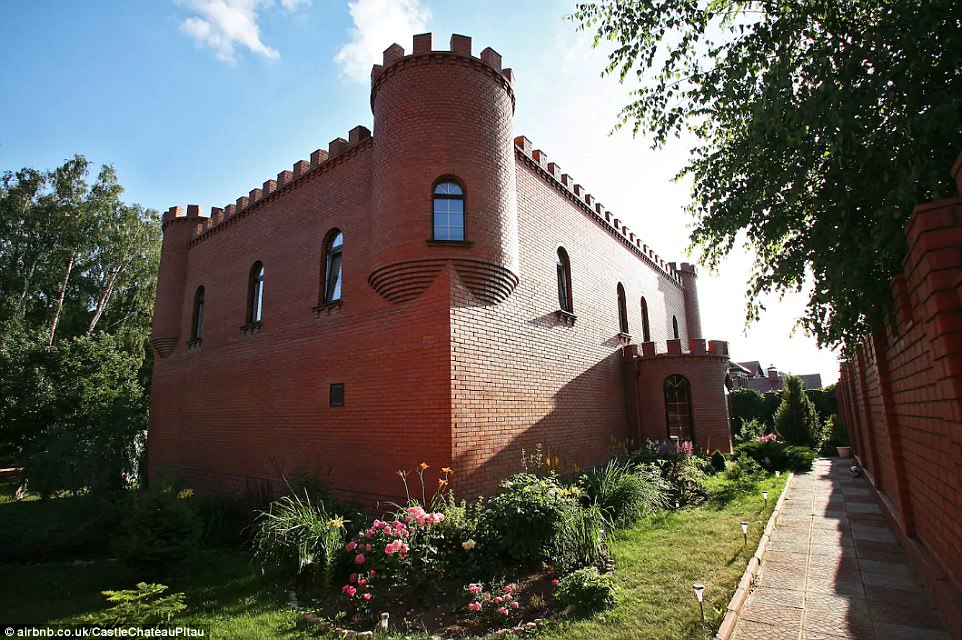 Dramatic: This small castle near Moscow comes complete with a resident ghost who appears at midnight, each week 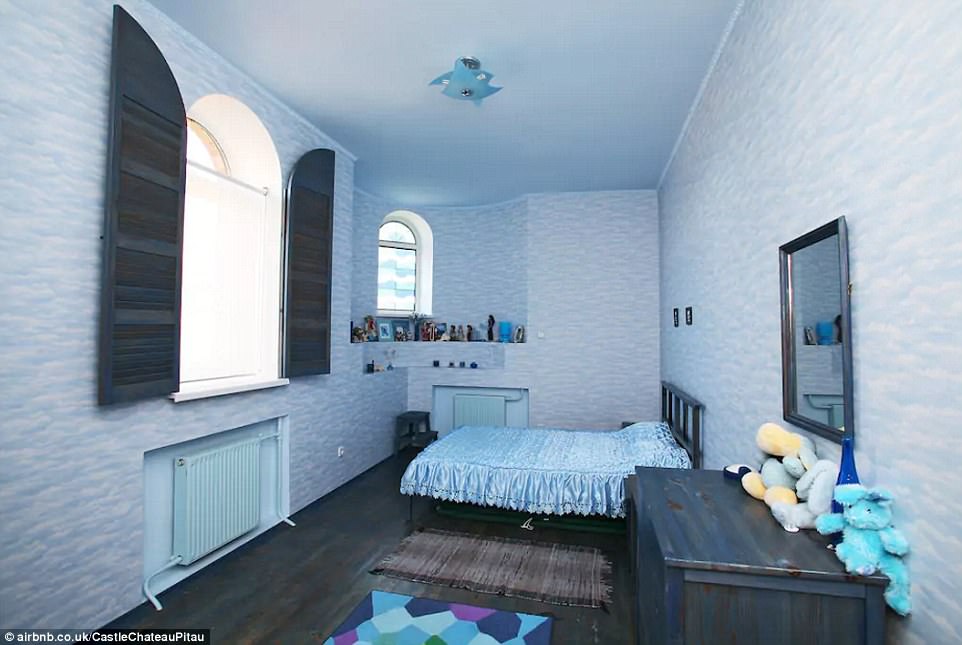 Proud: The owners of Castle Chateau Pitau, near Moscow, advertise the fact they have a regular spirit visitor 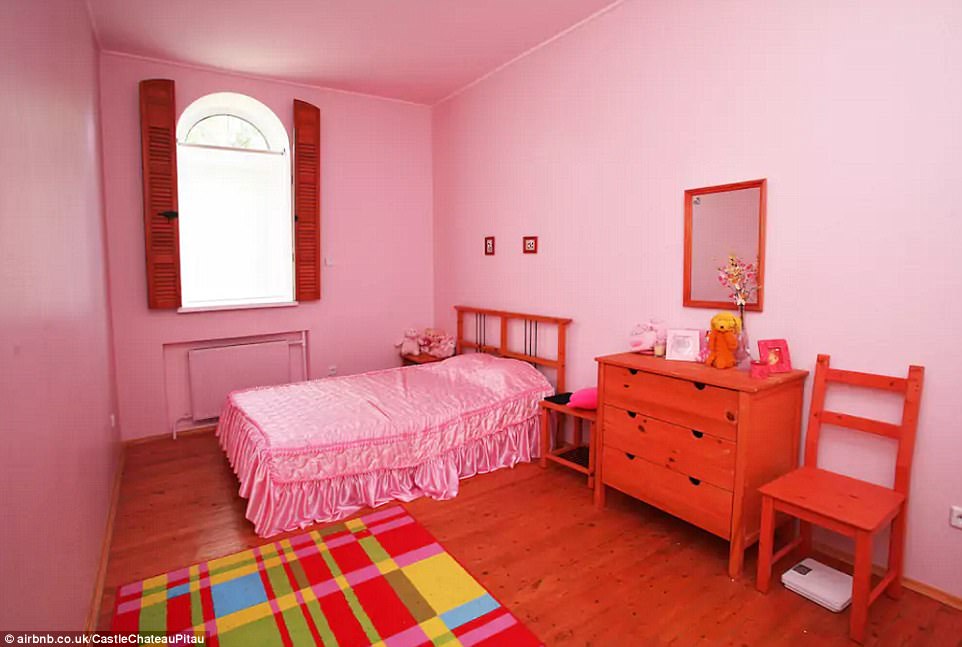 Room with a frightening view: Thankfully, the apparition is only supposed to make an appearance once every seven days

According to local legend, this small castle near Moscow comes complete with a resident ghost who appears at midnight, each week.

It’s not clear who the spirit figure is – whether young or old, male or female – but the owners are clearly proud of their ghoulish guest because they happily refer to it on their listing.

Thankfully, they also make reference to the more standard amenities, including a swimming pool, sauna and disco room, which surely keeps guests in good spirits. 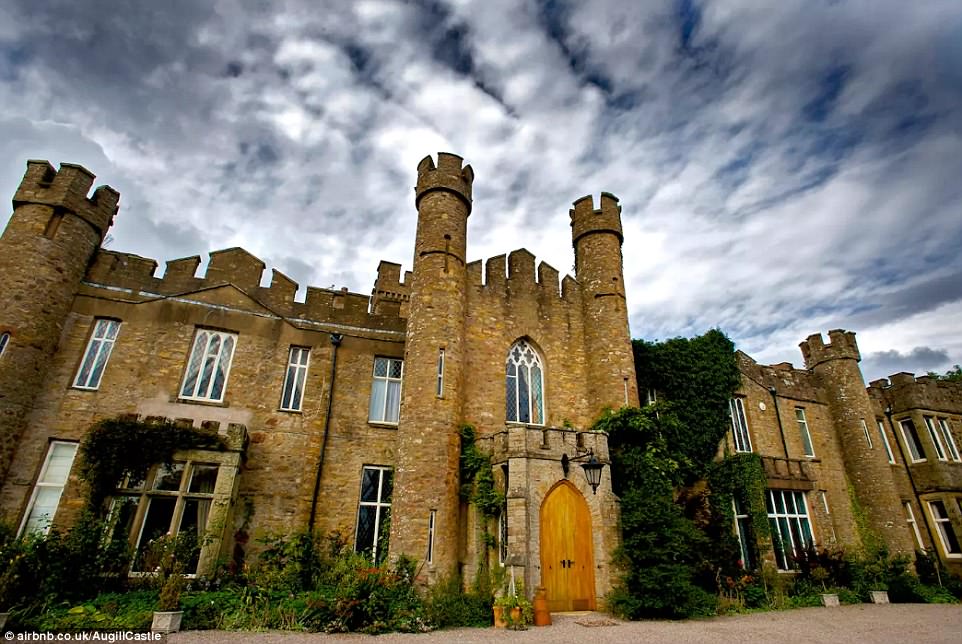 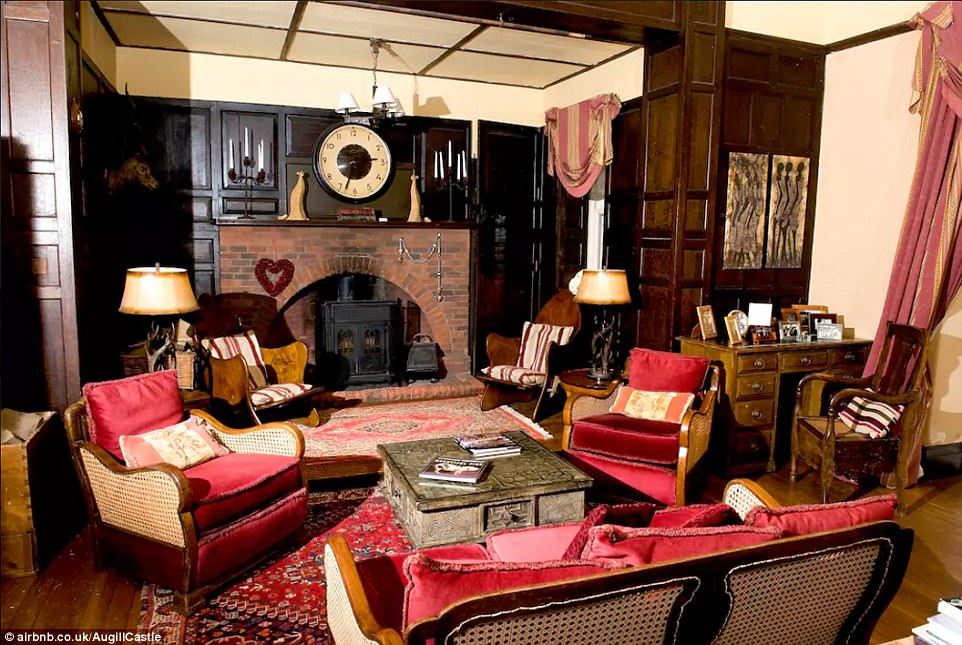 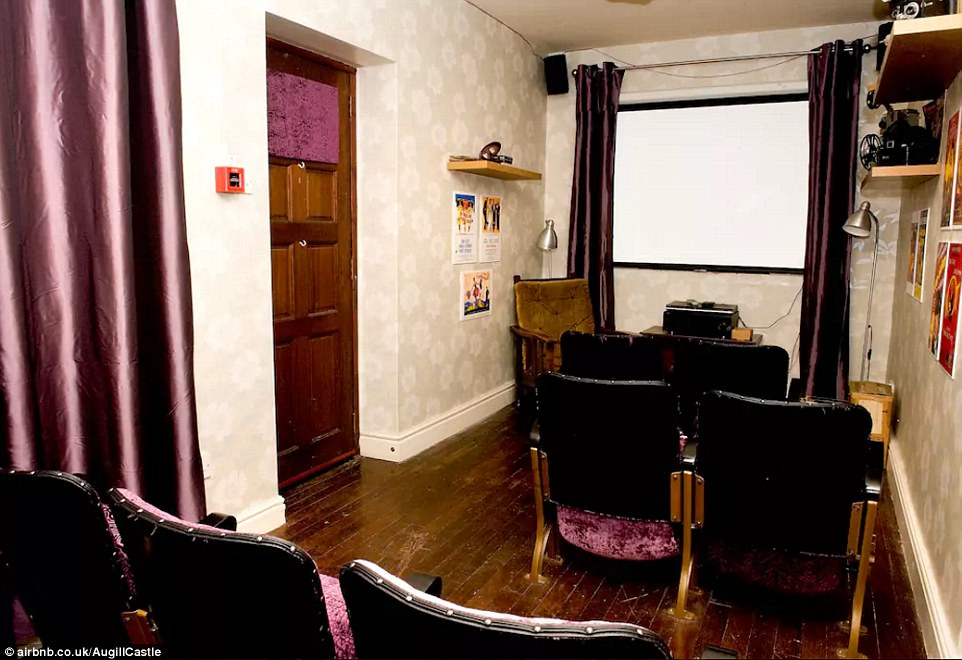 If you’re looking for ghoulish grandeur, this is it.

Built in 1841 by John Bagot Pearson, some say he refuses to move on from his architectural accomplishment and still visits one of the main bedrooms.

The building sits on the edge of both the Yorkshire Dales and the Lake District, making it a great place to explore Northern England. If you survive the night, of course… 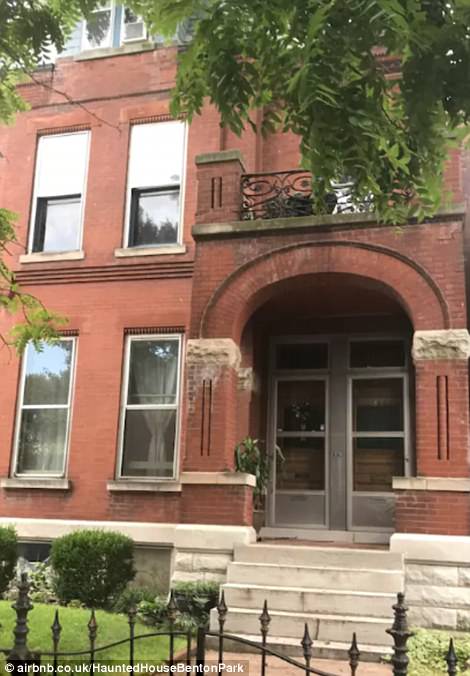 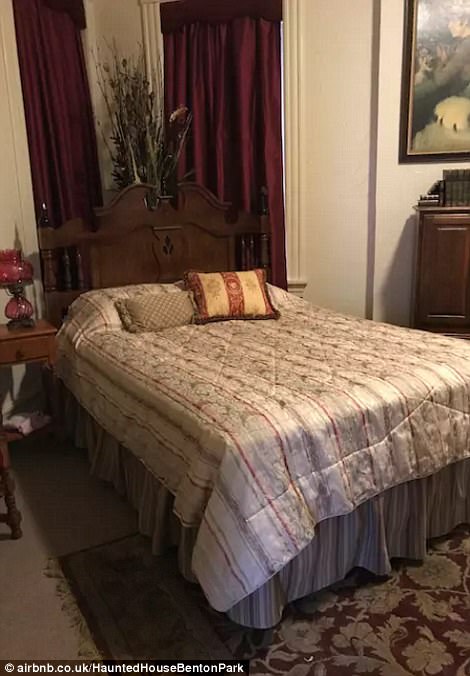 Old: Originally built in 1890, this St.Louis property once housed a live-in maid, who is still said to haunt the building (left), while one of the bedrooms is shown from the advert 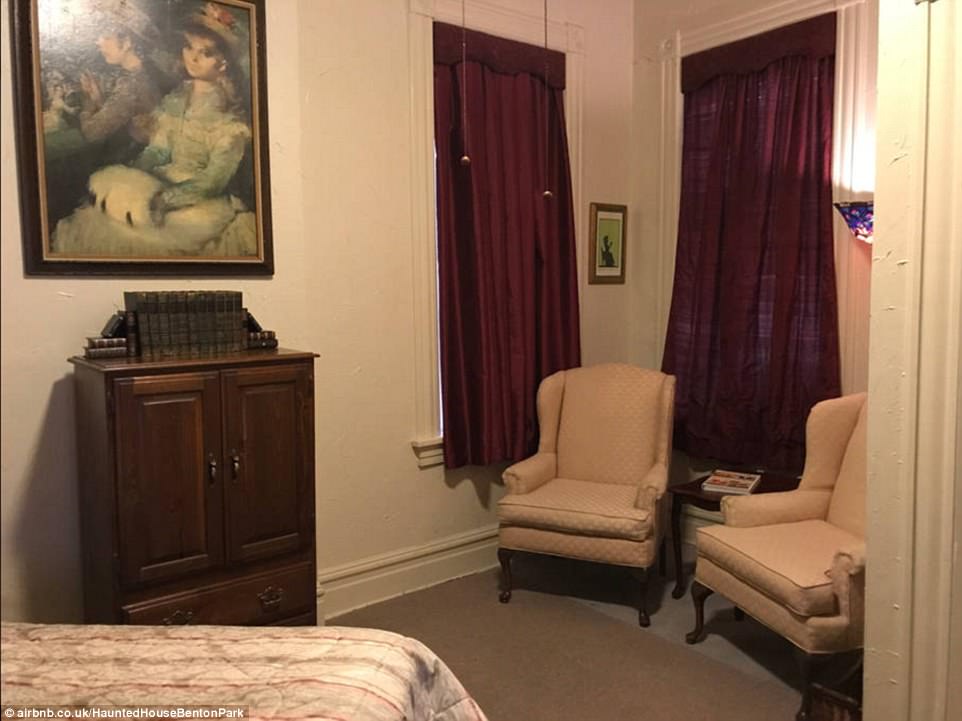 Reports: One of the previous guests claimed to hear ‘a woman’s voice gently humming in the kitchen, which halted when we began to get up to check it out’

This three-storey brick house was built in 1890. The second-floor formerly housed the maid, giving her access to the first-floor kitchen via stairs to the basement, thus not disturbing the resident family.

Ironically, it now seems she disturbs residents. One guest, Joseph, said in a recent Airbnb review: ‘A woman’s voice was heard gently humming in the kitchen, which halted when we began to get up to check it out.’

The owners, Debbi And Tom, responded saying: ‘The woman humming must’ve been from the spirit of the maid that used to serve the household and was secretly in love the husband/owner of the house.’ 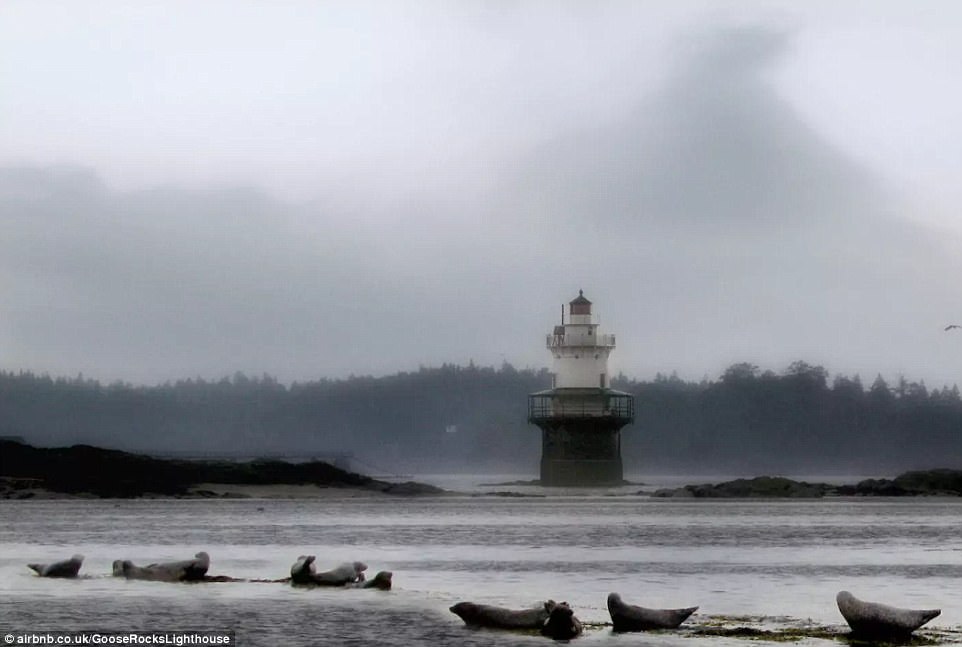 Remote: Perched in Maine’s North Haven, this lighthouse remains an active aid for sailors who need guidance on the water 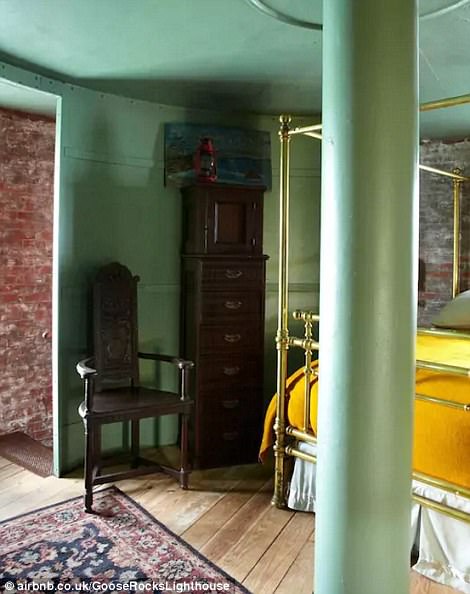 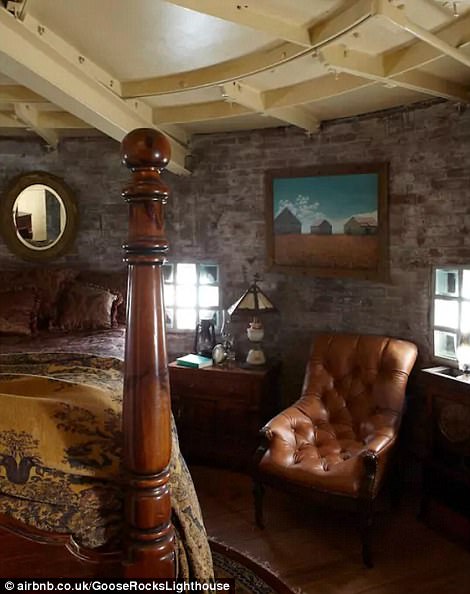 Inside: Images from two of the interior rooms show a typically old-fashioned lighthouse, which is a regular stop on the local ghost tour. The organisers consider it one of the area’s most creepy attractions

This Victorian lighthouse is as remote as it is scary-looking.

Perched in Maine’s North Haven, it remains an active aid to navigation – meaning the flashing beacon light and fog horn are still used by boats to help guide them through the channel.

But the ‘sparkplug’ structure is also a regular stop on the local ghost tour, which hails it as one of the area’s most creepy attractions. Not least because the original owner’s son, Norman, died in a tragic fishing accident there.

It accommodates six guests over three bedrooms and costs £471 per night. 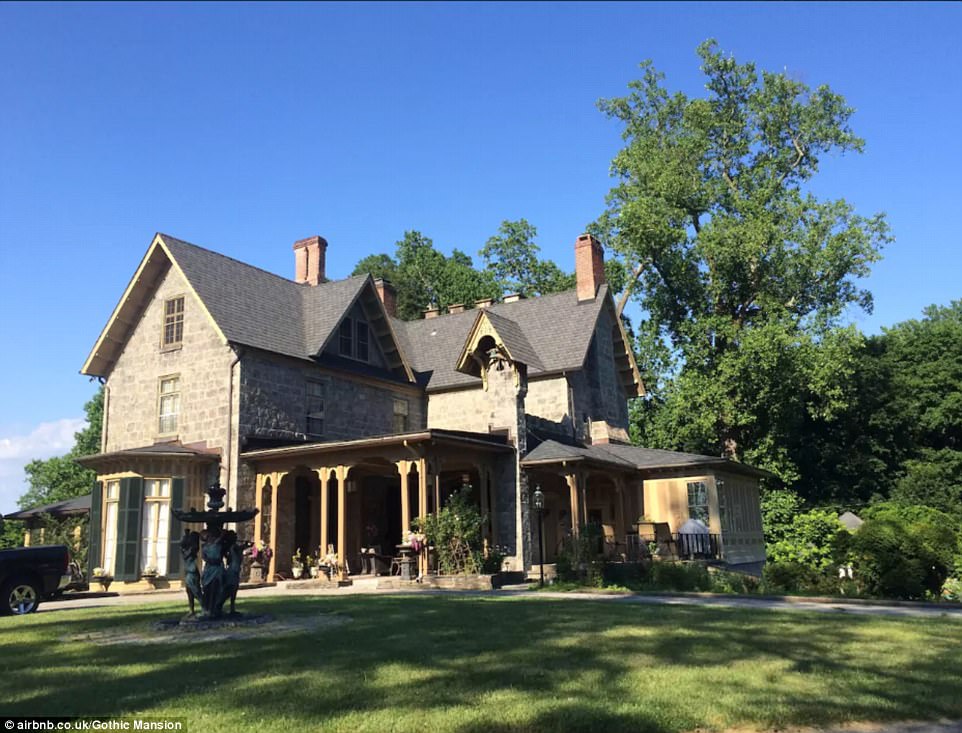 Popular: TV shows, commercials and documentaries are shot in this Ellicott City property, due to its Gothic appearance 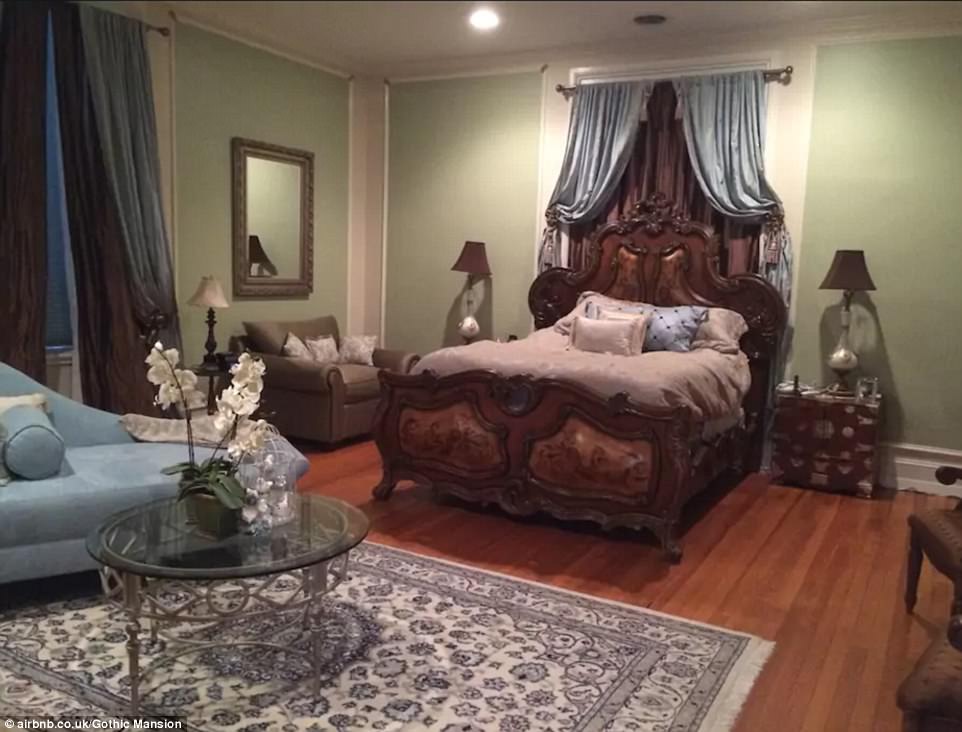 Traditional: Inside, the house is filled with timeless antiques, which give the four-bedroom building an ominous feel 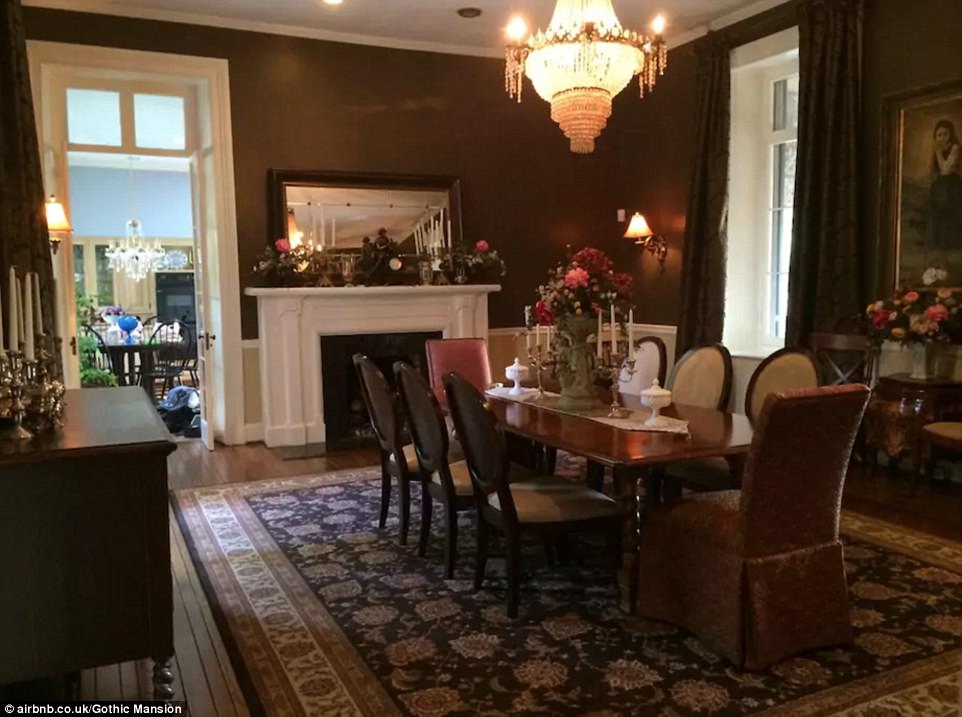 Step back in time: The house was originally built 160 years ago, which means it has witnessed plenty of life and death

More than 160 years old, this eerie-looking property is steeped in lives past.

Built within seven acres of land, the grounds boast a play yard and swimming pool – but, inside, it’s filled with timeless antiques, which give the four-bedroom building an ominous feel.

Many TV shows, commercials and documentaries are shot here due to its Gothic appearance, which has helped to give it the infamous reputation of a haunted house.

Are you brave enough to test that theory? 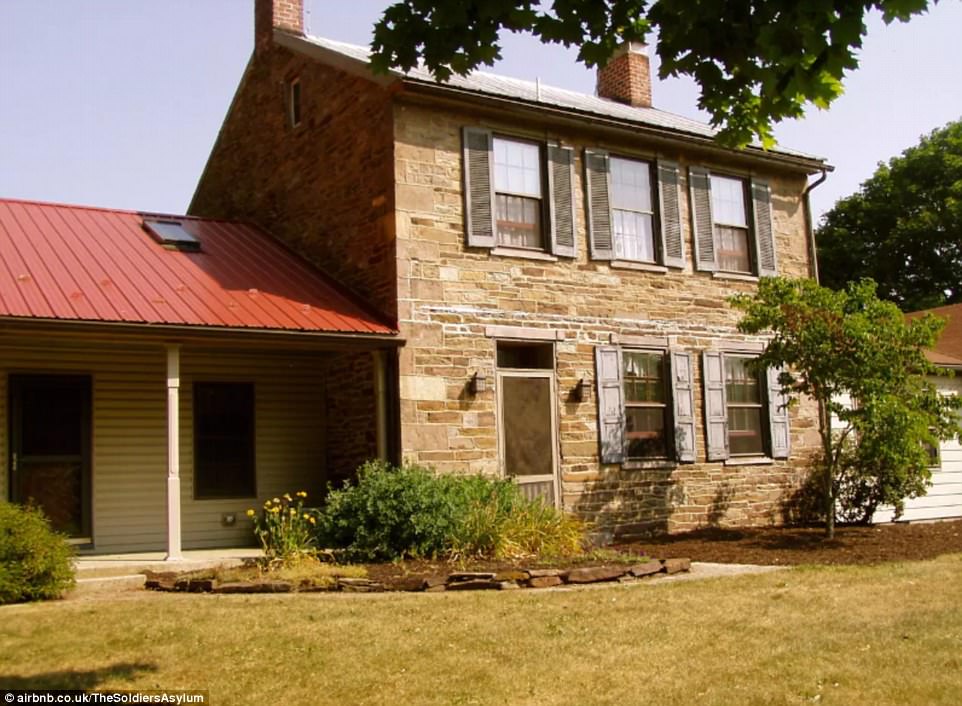 Picture perfect? Just over 150 years ago, the stately stone house was a scene of unimaginable anguish thanks to its location in Gettysburg, a battleground for the bloodiest war in U.S. history 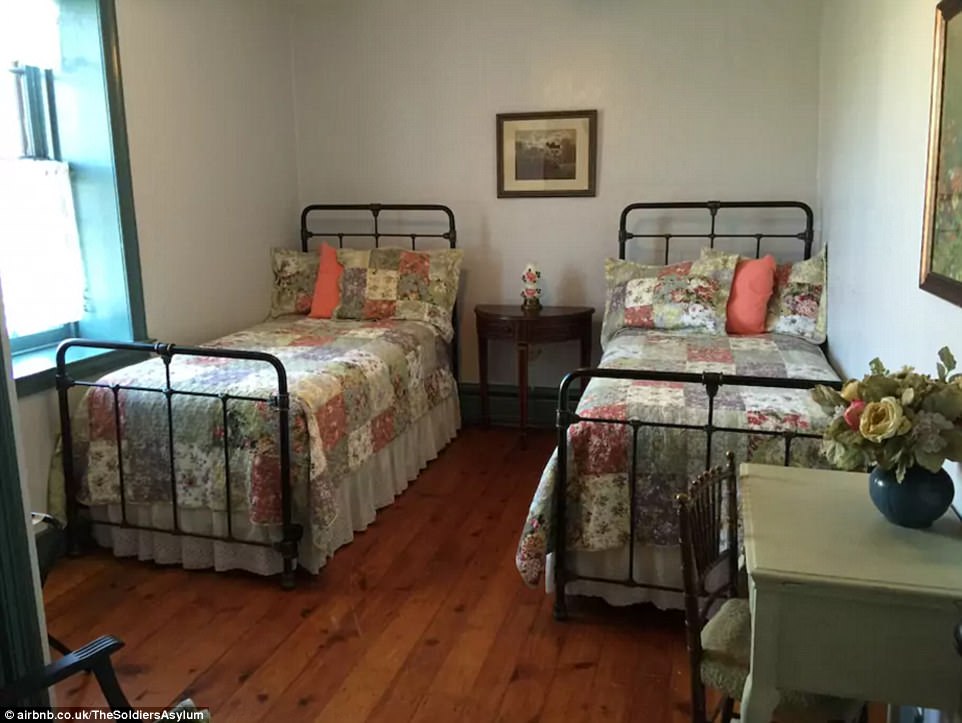 Bloodied: After the Civil War, 56,000 dead or gravely wounded Confederate soldiers were carried through the town. The house was used as a field hospital 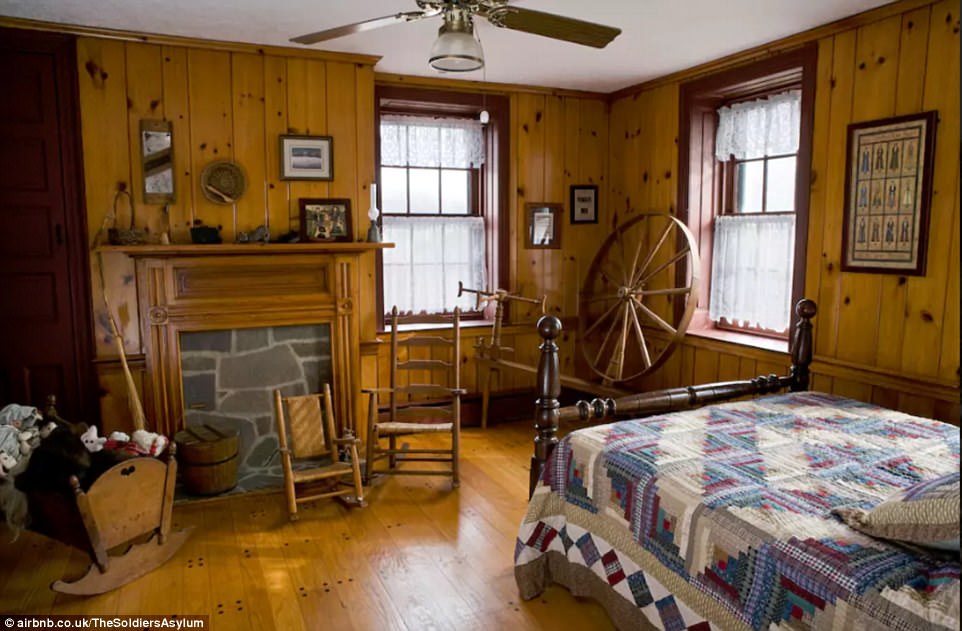 Activity: The property’s current owner says the home’s tortured past has resulted in strange activity

This historic Civil War hospice-turned-farmhouse looks like the perfect place to have a holiday.

But, just over 150 years ago, the stately stone house was a scene of unimaginable anguish thanks to its location in Gettysburg, a battleground for the bloodiest war in U.S. history.

After the Civil War ended, 56,000 dead or gravely wounded Confederate soldiers were carried through the town’s main artery and the house was used as a field hospital.

‘The column of cannons, horses, bodies, and all the injured soldiers was drug down that road. It was a horrible mess,’ says host Stephani Maitland.

These days, owner Stephani says her family didn’t learn about the home’s tortured past until years after moving in, which made certain strange events that had been happening come clearly in to focus… 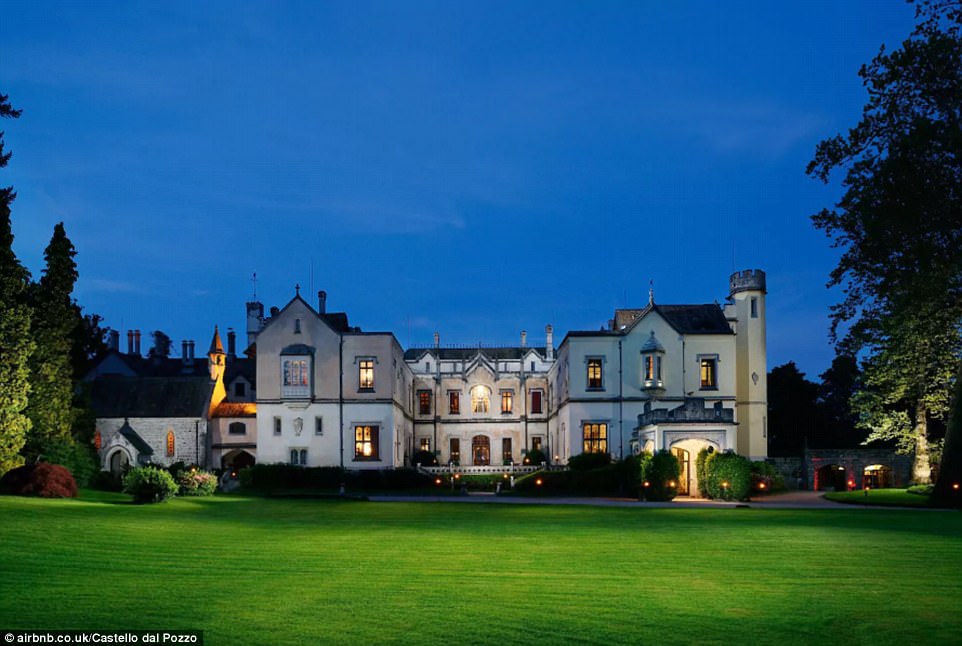 Haunted: Castello dal Pozzo is said to be plagued by a women who died of a broken heart here 500 years ago 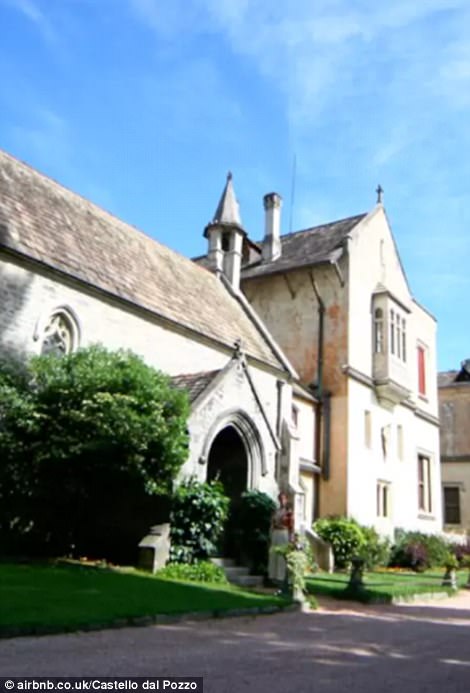 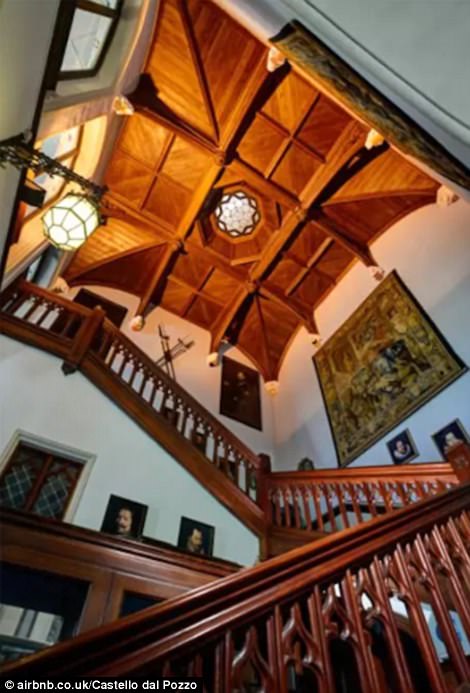 Stunning: An exterior shot of the building highlights its architectural beauty, while the interior is equally impressive

Here, a ghost called Barbara is said to watch over the grounds. More than 500 years old, she’s still mending a broken heart – according to local folklore.

Dubbed the ‘Lady in Waiting’, her lover was a captain named Matteo, dispatched to the castle in 1467 to help the Duke of Milan defend the region as a battle roiled nearby.

Despite being promised to another man, true love beckoned. The pair plotted to flee together, but were found out. Matteo was exiled and Barbara’s father locked her in the castle tower, where she slowly wasted away from sheer despair. Sometimes during the night it is possible to hear sighs and wails coming from the Tower…

The property has eight bedrooms and can be hired from £3,187 per night. 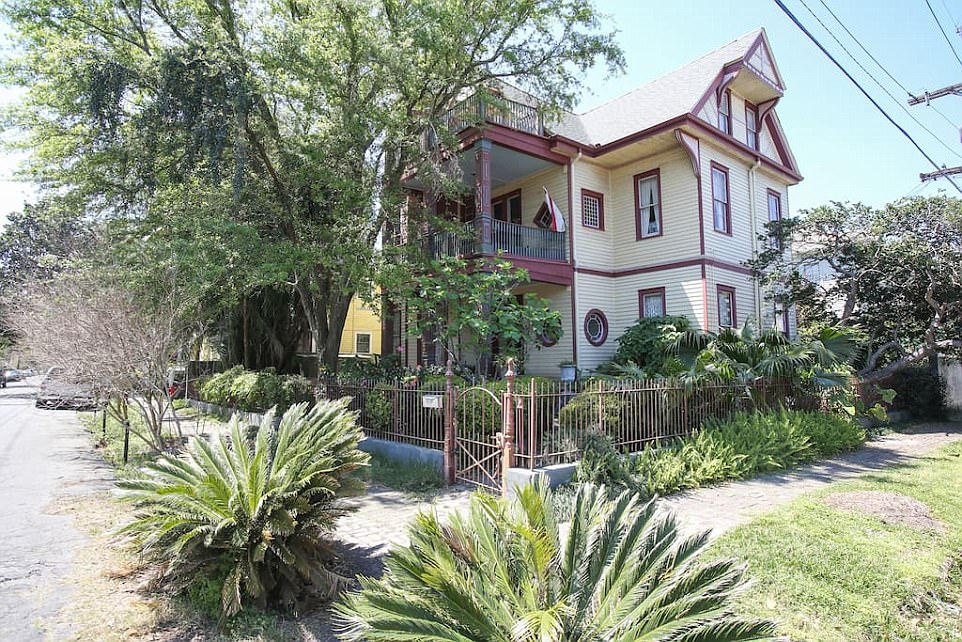 After moving into this Parks-Bowman Mansion in 2005, host Adrienne Parks first learned of the hauntings through neighbourhood chatter, but soon learned that the mystery girl was a benign, helpful roommate 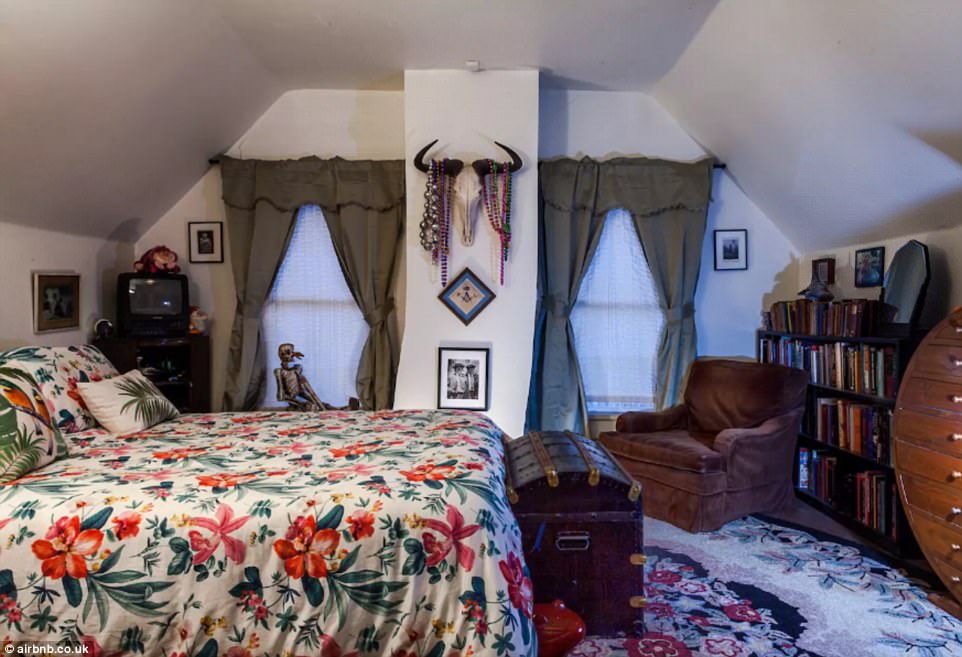 One guest described the mansion as ‘perfect’, but also that it was ‘sometimes perception-shifting’

Nestled in New Orleans’ Garden District, this Parks-Bowman Mansion has hosted countless guests, But it is also home to a breezy presence described as a young, raven-haired girl wearing a long yellow dress.

After moving into the home in 2005, host Adrienne Parks first learned of the hauntings through neighbourhood chatter, but soon learned that the mystery girl was a benign, helpful roommate – although no one has yet solved the mystery of why she still roams the property and what exactly she is searching for.

‘This is our go-to place in New Orleans. The location is ideal, and the mansion is perfect – filled to the brim with the whimsical, hysterical, and sometimes perception-shifting,’ said one guest from Florida.