The top spots for food and drink for Alfresco April, from hotels to country houses

The top spots for food and drink for Alfresco April, from hotels to country houses and whole city streets

Every week our Holiday Hero Neil Simpson takes an in-depth look at a brilliant holiday topic, doing all the legwork so you don’t have to. This week: The best places to eat during alfresco April.

Hotels, country houses and whole city streets are gearing up for an awesome reopening, serving food and drink outdoors from April 12 as Covid restrictions ease.

Advance booking will be essential at most locations, as numbers will be limited while table service will keep guests safe. And don’t be worried about April showers – owners plan to offer everything from marquees to umbrellas and air heaters to keep guests comfortable.

Back on the menu: Friends will be able to meet again for outside drinking at hotels and bars from April 12

Anyone missing holidays in Italy should book a table on the Italian Terrace at Heckfield Place in Hampshire, just down the road from Jane Austen’s house in Chawton.

A new juice and salad bar will be April’s big attraction at The Falcon Hotel in Castle Ashby, an old coaching inn dating back 400 years. It’s perfect if you’re taking one of the hotel’s new outdoor yoga, meditation or bootcamp classes, which can be booked from mid-April. 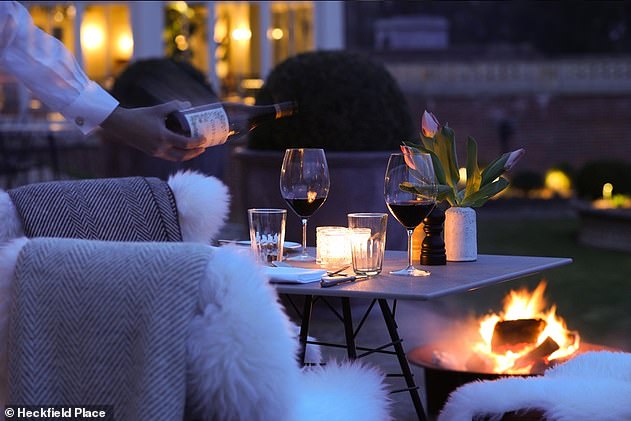 Or wrap up warm and buy refreshments for a springtime picnic amid some of Northamptonshire most beautiful countryside (thefalcon-castleashby.com).

Dogs can share the alfresco fun at The Ship Hotel in Brancaster, Norfolk, with water bowls under each of the 16 tables. There’s a ‘secret garden’ feel to the terrace, with twinkling lights, award-winning food plus wines, beers and some 30 gins on offer (shiphotelnorfolk.co.uk).

In the Cotswolds, the Bathurst Arms, the first pub in Britain to achieve a five-star rating from the Soil Association for its use of organic produce in its menu, is preparing to open its waterside gardens to diners.

The pink-walled pub, set alongside the River Churn in North Cerney, focuses on ‘best of British’ ingredients from local suppliers. See the spring menu and book a table at bathurstarms.co.uk.

In London there’s a nautical theme on The Montagu Summer Terrace of The Churchill hotel near Hyde Park in Marylebone. The bar will serve dishes such as Whitstable oysters, lobster and fries and an English burrata served with Isle of Wight tomatoes, plus the hotel’s whisky-based Churchill’s Tot cocktail (themontagurestaurant.co.uk).

A light-hearted ‘beach-hut menu’ is a treat in the lush gardens of the five-star Berkeley Hotel in Knightsbridge, where alfresco meals on its terraces – and also in actual beach huts – can end with an old-fashioned ice-cream sandwich or the hotel’s reimagined ‘gourmet 99’ (the-berkeley.co.uk). 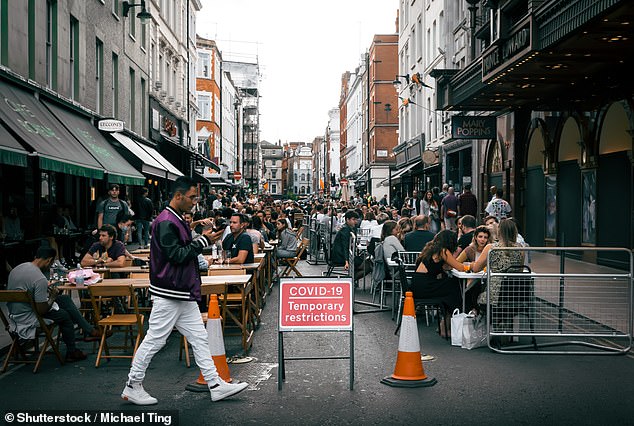 Closer to the heart of the capital, hundreds of restaurants, hotels and bars will offer table service on some 60 streets which are due to be closed to traffic in areas such as Soho, Covent Garden and China Town. Hugely popular last summer, the best advice is to find the website of your favourite to see if it will be taking part, or check listings at timeout.com.

The street dining trend is also returning to Derby for a second time, with a mix of bookable tables and mini-chalets on offer in the city’s historic marketplace, all set under colourful parasols amid specially commissioned street art.

Live entertainment will be added to the mix as restrictions ease and Derby prepares to celebrate the 300th anniversary of the opening of The Silk Mill, described as the world’s first factory (derbymarketplace.co.uk).