The torn hamstring that was patched up with polyester tape!

Back to new: Christina Andrew, 55, from Derby, is now fully mobile

Waterskiing has been a huge part of my life for more than 30 years, but last summer I had a nasty accident which almost ended my days on the water for ever.

Out on the lake last July, I made a slight mistake and was pulled forwards. My right foot did not release from my ski and I ended up forced into the splits. It felt like it happened in slow motion — there was a tearing sensation in the back of my right thigh, and then in my buttock. As I floated in the water, the pain hit me and I knew straight away I’d hurt myself badly.

Back on dry land, I couldn’t straighten my right leg or bear weight on it. The pain was excruciating.

The next day, my leg was swollen and hurt so much that my husband, Bryan, couldn’t move me, so we called an ambulance. At the hospital, nothing showed up on X-rays, so an MRI scan was booked for three weeks later and I went home with painkillers and crutches.

Over the next few days, my leg turned black and blue. I could hobble to the bathroom on my crutches, but I couldn’t sit or climb the stairs, and spent most of my time lying on my side.

Healthy hamstring muscles are anchored by tendons to the ‘sit’ bone in the pelvis at one end and the top of the calf at the other. The MRI showed I’d ripped the muscles and tendons away from my seat bone.

There was a bulge half-way down the back of my thigh where my hamstrings had slid down and bunched in an agonising knot. Painkillers and even physiotherapy made little difference.

Last October, a new consultant said I couldn’t hope for much more improvement and that while surgery was sometimes performed in the case of top athletes, someone of my age — then 54 — didn’t warrant it.

It seemed waterskiing, horse riding, walking my dogs and everything I loved doing would be out of the question. I couldn’t even do my job as a lecturer in animal and horse management.

This was a life-changing injury and by December, five months after the accident, I was still on high-dose painkillers, taking lots of time off work and I felt life was a mess. I went online and after much searching, found a page on Facebook: Proximal Hamstring Injury and Surgery, where a lady posted about her appointment with Roger Hackney, an orthopaedic surgeon in Leeds. 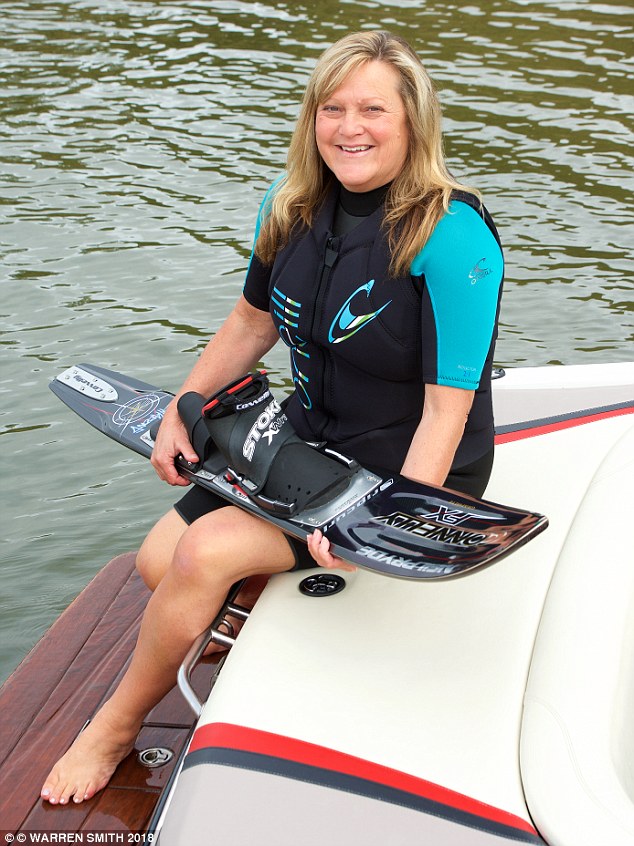 On the water: The lecturer suffered a ‘life-changing’ injury while waterskiing, last year

When I got in touch with him he was concerned I’d left it too late, but said he could reattach the muscles and get me back to work and looking after my horses. He wasn’t sure about the waterskiing, but I thought, that will do for me.

He would make an incision in the crease where my leg joins my buttock — the hamstrings would be pulled back up and reattached using anchors drilled into my sit bone; polyester tape would reinforce the repair.

It sounded scary, but I had the operation in January under general anaesthetic. I was warned of the risk of damage to the sciatic nerve that runs from the spinal cord to the feet so my last thought before going under was, ‘I hope I can feel my toes when I wake up’.

When I came around, my right leg was in a brace, but I could wiggle my toes!

For weeks I was on strong painkillers and injections to prevent blood clots. After six weeks, I began gentle physiotherapy and after eight the brace came off and I began learning to walk again. It’s been a slow and difficult recovery, but with hard work in the pool and gym, my leg is stronger.

Now, I can walk without a limp, ride my horses and walk my dog. I have little pain. Three weeks ago, I even went waterskiing. It was scary, but it didn’t hurt. The results are unbelievable.

Ruptured hamstrings are more common among people who are active in late middle age, although an injury of this severity is fairly rare, so most surgeons would have little or no experience of repairing one.

This, combined with the fear of complications with the sciatic nerve, puts them off, so generally it’s treated conservatively, with painkillers and physiotherapy, usually leading to at least partial recovery. But surgical repair is better for anyone who wants to remain very active.

– There are the usual surgical risks, such as infection.

– There is a risk that the sciatic nerve, which supplies the hamstring, is damaged, causing nerve pain.

– Commenting on the procedure, Chris Wilson, a consultant orthopaedic surgeon at University Hospital of Wales, says: ‘This injury, where the tendons are torn away from the pelvis, is best treated surgically as the muscles will function far better, and done as soon as possible.

‘Late repairs are a challenge, as the tissues are scarred — often involving the sciatic nerve — and the hamstrings often shortened, meaning surgery is more difficult, although the risk of complications is still small.’

The hamstrings are three muscles which run down the back of the thigh. They start at the pelvis, attached by tendons to the bone you sit on, and cross the knee joint to attach to the top of the calf.

Most hamstring injuries are ruptures in the central part of the muscle, or where the muscle joins the tendon. But muscles occasionally pull off the bone altogether, as Christina’s did.

Surgery is best carried out as soon as possible, because when the hamstring has been disconnected for more than three months, the muscles shrink, making it more difficult to pull them back into place.

Usually we reattach them by screwing two or three tiny metal anchors into the bone. We pass stitches through eyelets in the anchor and into the tendon attached to the muscle. The tendon can then be drawn up to the bone. This all takes about 90 minutes.

However, MRI scans showed that in Christina’s case, the tendon had retracted to 10 cm away from the bone. This is where the new polyester tape came in. Developed by the University of Leeds and Keio University in Japan, it is extremely strong but stretchy.

We ran this through the eyelets in the anchor and then at the other end stitched it to the tendons of the shortened muscle. It has a mesh structure which allows tissue to grow into it, providing an extremely strong repair. I have used it on six patients so far.

The speed of recovery varies — it’s quicker with a fresh rupture and no need for a brace: the patient can return to activity in three months, whereas recovering from a delayed repair can take six to 12 months.