Australian Commonwealth Games star Jemima Montag claimed an inspirational back-to-back Commonwealth Games gold medal in the 10km walk at Birmingham on the weekend while wearing a touching tribute to her Holocaust survivor grandmother.

A piece of the necklace that belonged to her grandma – who survived the atrocities of the infamous Nazi death camp Auschwitz-Birkenau during World War II – was front and centre on the 24-year-old’s wrist as she recorded a blistering time of 42 minutes and 34 seconds.

The necklace was broken into three pieces and divided between Montag and her two sisters to honour their late grandmother, and the gold-medal winning champion said it was drove her to succeed.

‘I lost my nana about a year ago, just before the Olympic Games, and it’s only in the months that have followed that we’ve really been able to unpack her story as a Holocaust survivor,’ Montag told the ABC.

‘It’s something that understandably she didn’t want to talk about much, and there was a lot of pain and trauma there.

‘I wear my nana’s bracelet as a lucky charm now. And it reminds me of that strength and resilience.

‘It’s just a really tangible reminder of what she sacrificed for dad and then me to even be alive. Sometimes, you know, sport is hard and it comes with its challenges.

‘(But) it’s a reminder that I choose to be out there day in, day out at these competitions doing what I do. And it’s hard, but it should be fun.’

Montag’s grandmother was there to see her win gold at the Gold Coast Commonwealth Games four years ago, but her time at  Auschwitz-Birkenau was rarely spoken about.

After her death in 2021, Montag has been discovering the details of how her grandmother fought for survival in the brutal and hostile camp where hundreds of thousands of people were tortured and murdered.

‘In some of her love letters and journal entries she wrote about just trying to make it through the next hour, the next day, just hoping to meet her dad at the gate with a piece of bread,’ Montag said. 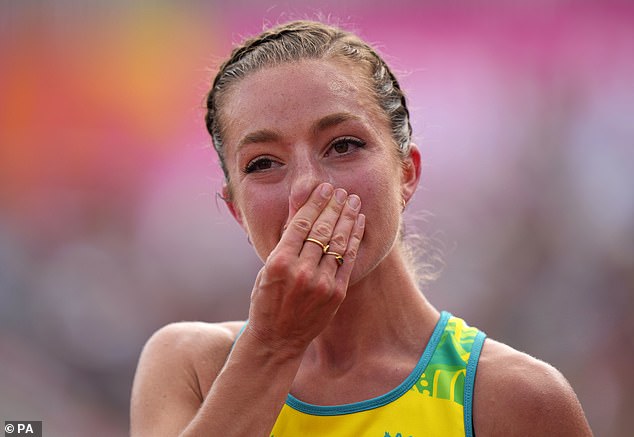 ‘You just had to have such a careful balance of taking risks and being a little cheeky when it was possible.

‘Stealing scraps of food, running from one line to the other if it meant not being put to the gas chamber, and then sticking by the rules, when it was the right thing to do so.’

When the going gets tough on the training or competitive track, Montag only needs to look at the bracelet to draw inspiration from how her grandmother’s treks during World War II meant the difference between life and death. 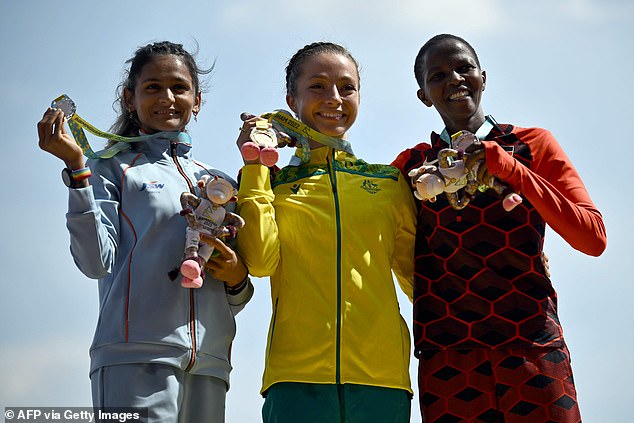 ‘They marched through snow and cold for days on end in little sandals, and hardly any clothing,’ she said.

‘She and her sister took their waist bands and tied their wrists together and they said ‘we’re getting through this together or not at all.’

‘So just visualising her walking on ice, not knowing when her next meal would be or if she’d survive.

‘This [race walking] is fun and this is something I choose to do and yes, it’s hard, but someone just two generations ago had that level of strength and I know it’s with me now.’