The tragic tale of Slapton Sands

The shocking double tragedy of a D-Day rehearsal exercise 75 years ago this weekend has been remembered in a new book.

More than 1,200 Allied soldiers were killed over two days off Slapton Sands in Devon, a disaster that was kept hidden by the authorities for decades.

On April 27, 1944 over 400 of them were slaughtered by the friendly fire of shells bursts on the beach due to a timing error.

More than 1,200 allied soldiers were killed during a D-Day training mission at Slapton Sands in Devon in April 1944 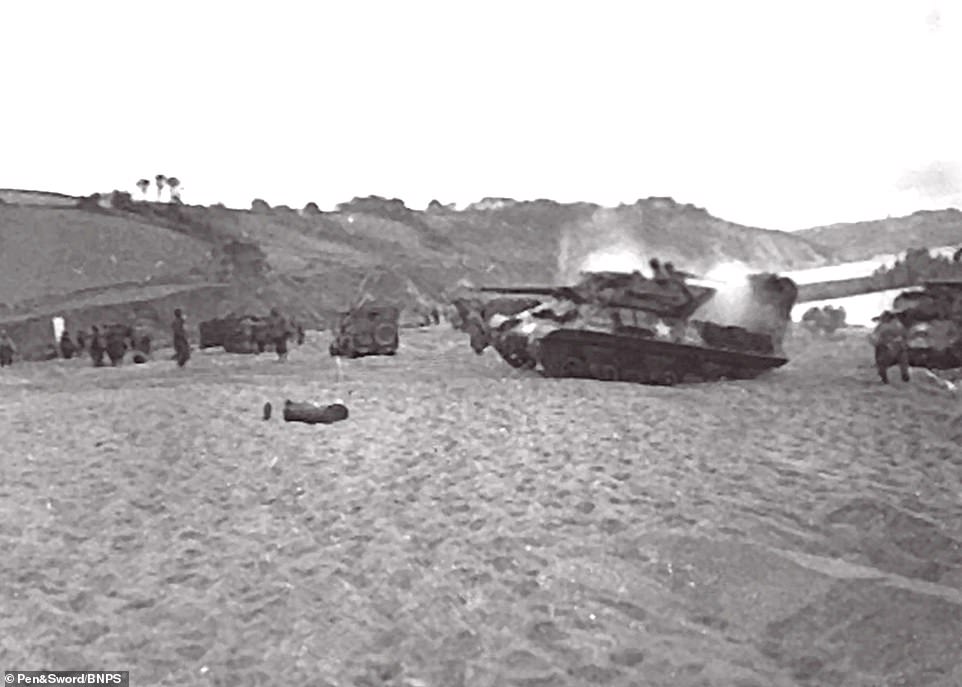 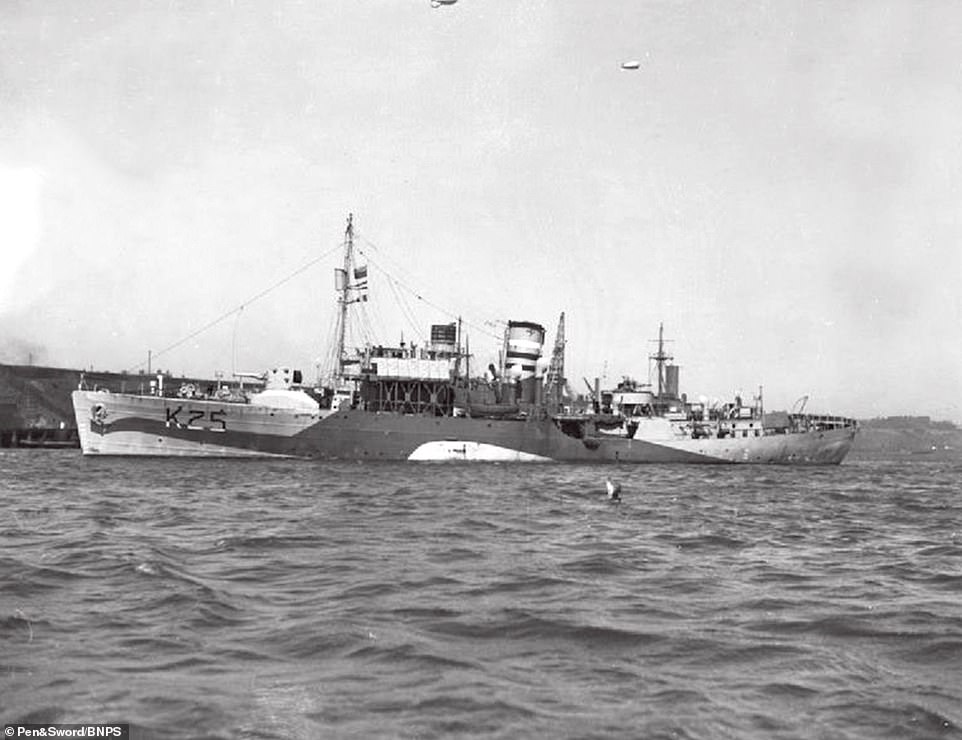 HMS Azalea, pictured, was part of the training exercise and spotted nine German E-boats approaching, but a radio error prevented allied forces from intercepting the attacking vessels before the could open fire killing 749 men

The following day nine German E-boats passing through Lyme Bay stumbled upon the exercise and opened fire on the mock-invasion fleet, killing 749 men.

Scores of bodies washed up on to the beach in harrowing scenes that would be replicated six weeks later on the beaches of Normandy.

The survivors of Exercise Tiger were sworn to secrecy as the tragedy had to remain out of the public domain so not compromise the impending D-Day landings.

Details of the horrors have slowly come to light over the intervening decades.

However, far less is still known about an appalling ‘friendly fire’ incident which the US authorities have never officially recognised. 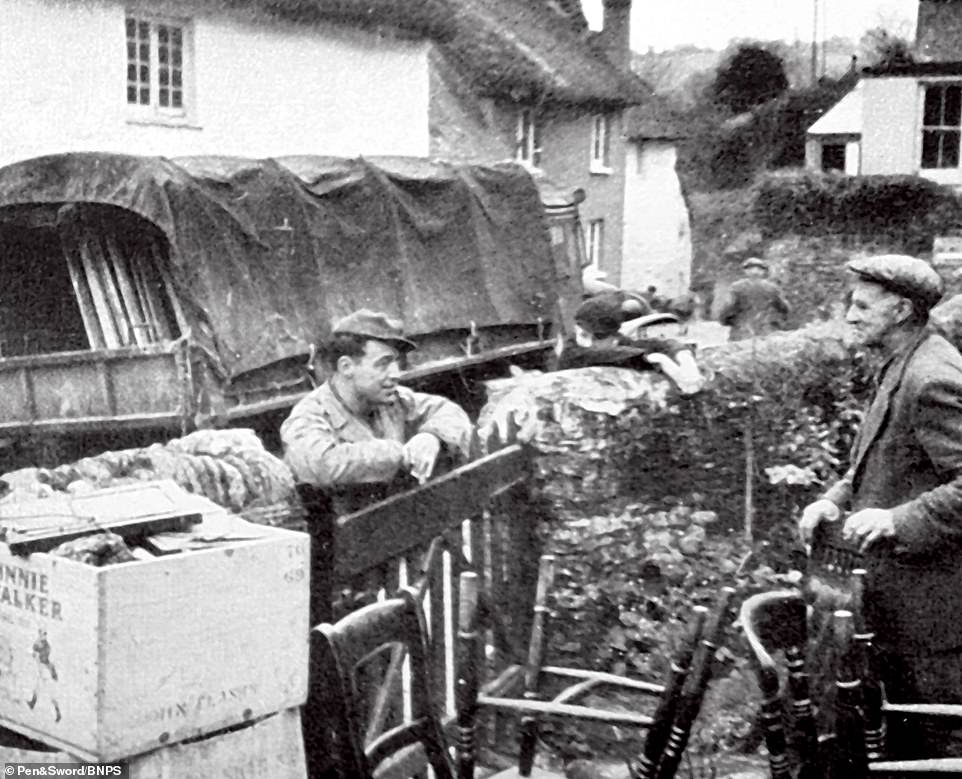 General Dwight D. Eisenhower wanted his men to be battle-hardened ahead of D-Day so he insisted on live ammunition being used during the trial run.

But a calamitous error with timings meant some of the landing craft arrived at the wrong time where they came under heavy artillery fire.

The tragic mishap meant a wave of servicemen taking part in the rehearsal were killed on the stony beach.

Historian Stephen Wynn has now shed new light on both tragedies in his new book, Disaster Before D-Day, Unravelling the Tragedy at Slapton Sands.

The British government set up a training ground around Slapton Sands on the coast of south east Devon, in late 1943 for the US forces.

The location was chosen because of its similarities to Utah beach, where the Americans would be landing in Normandy. 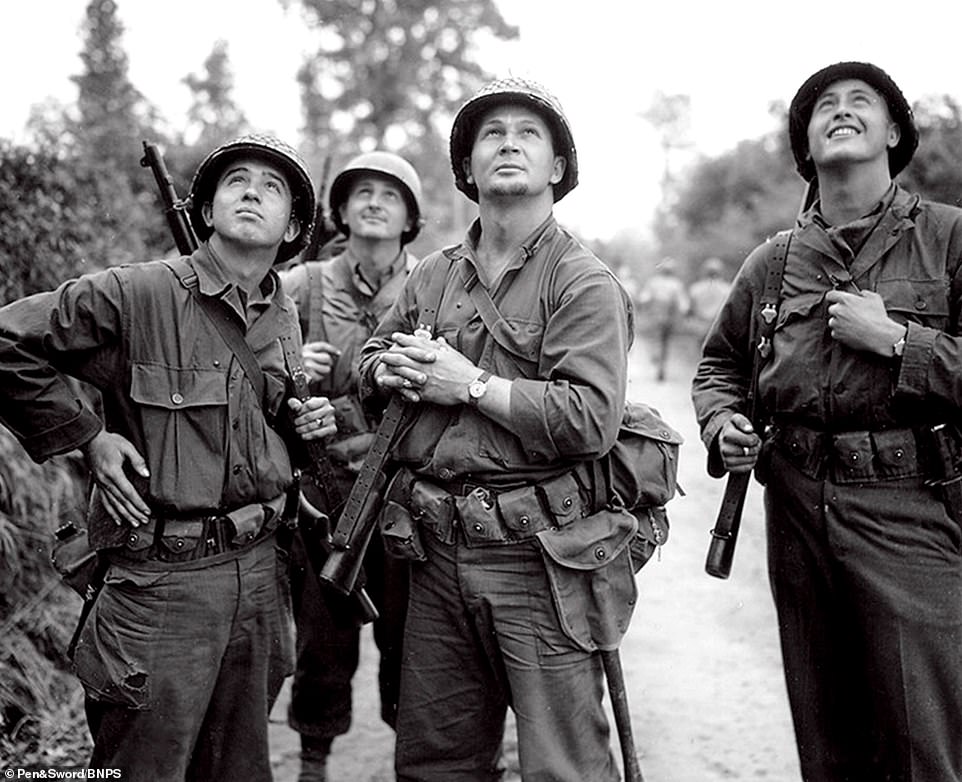 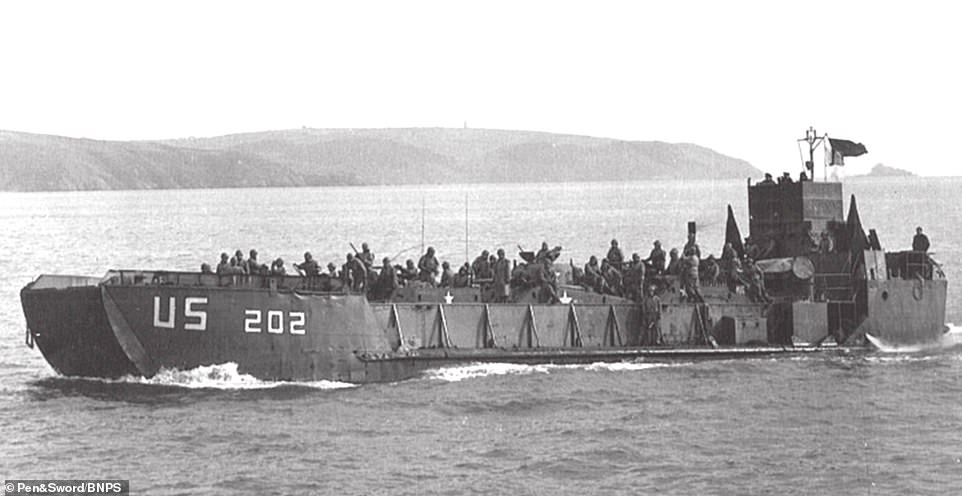 Eisenhower wanted the training missions to be as realistic as possible, although this led to problems when the delayed start of landings was not communicated naval officers planning an artillery barrage. As a result, troops arriving in landing craft, file photograph, were attacked by naval guns

Both had a gravel beach, a strip of land and then a lake.

Ahead of their arrival, about 3,000 residents from the villages in the area were given six weeks to leave their homes, with no explanation given.

Every step was taken to make it as realistic as possible, with enemy positions and concrete pillboxes constructed on the coastline.

The first practice assault took place on the morning of April 27.

Several of the landing ships were delayed so the American Admiral Don Moon decided to put back the assault on the beach until 8.30am.

However, shockingly, some of the other landing ships were not informed of this schedule change and arrived at the beach at the previously agreed time of 7.30am.

As a result, the artillery barrage which was meant to be fired before the practice invasion to recreate the sounds and smells of a naval bombardment was actually unleashed on disembarking American troops. 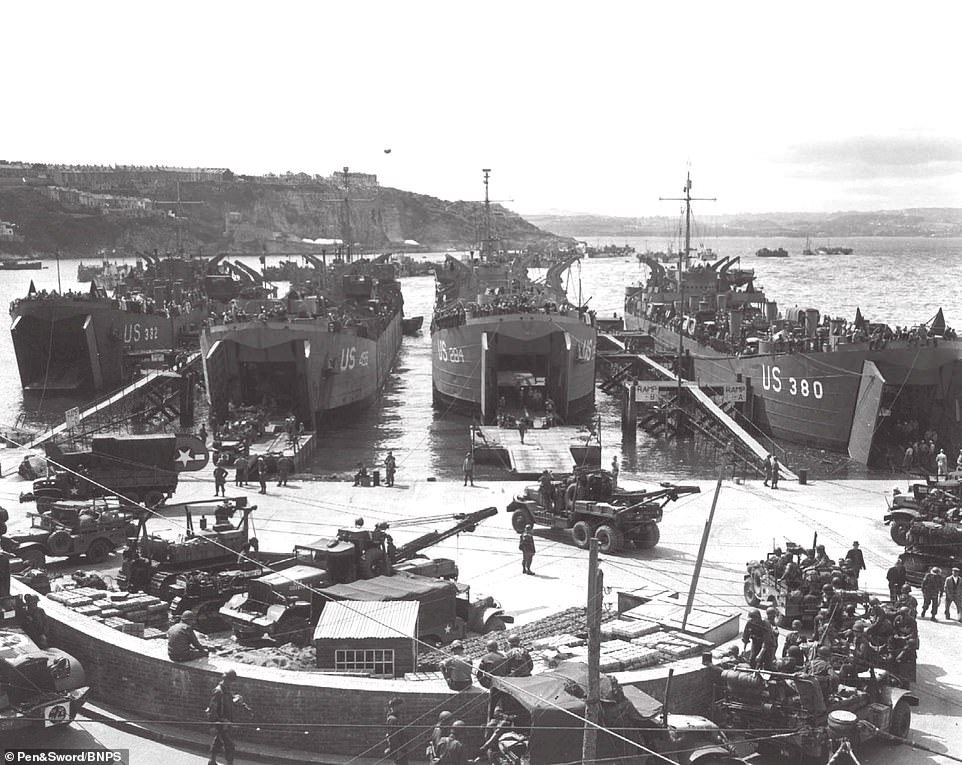 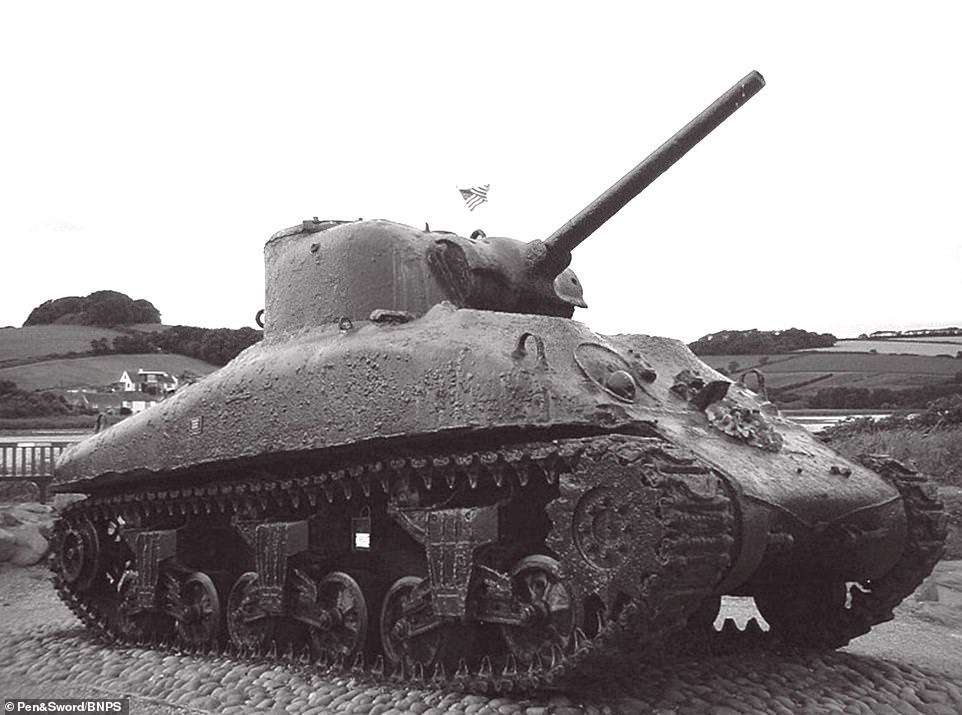 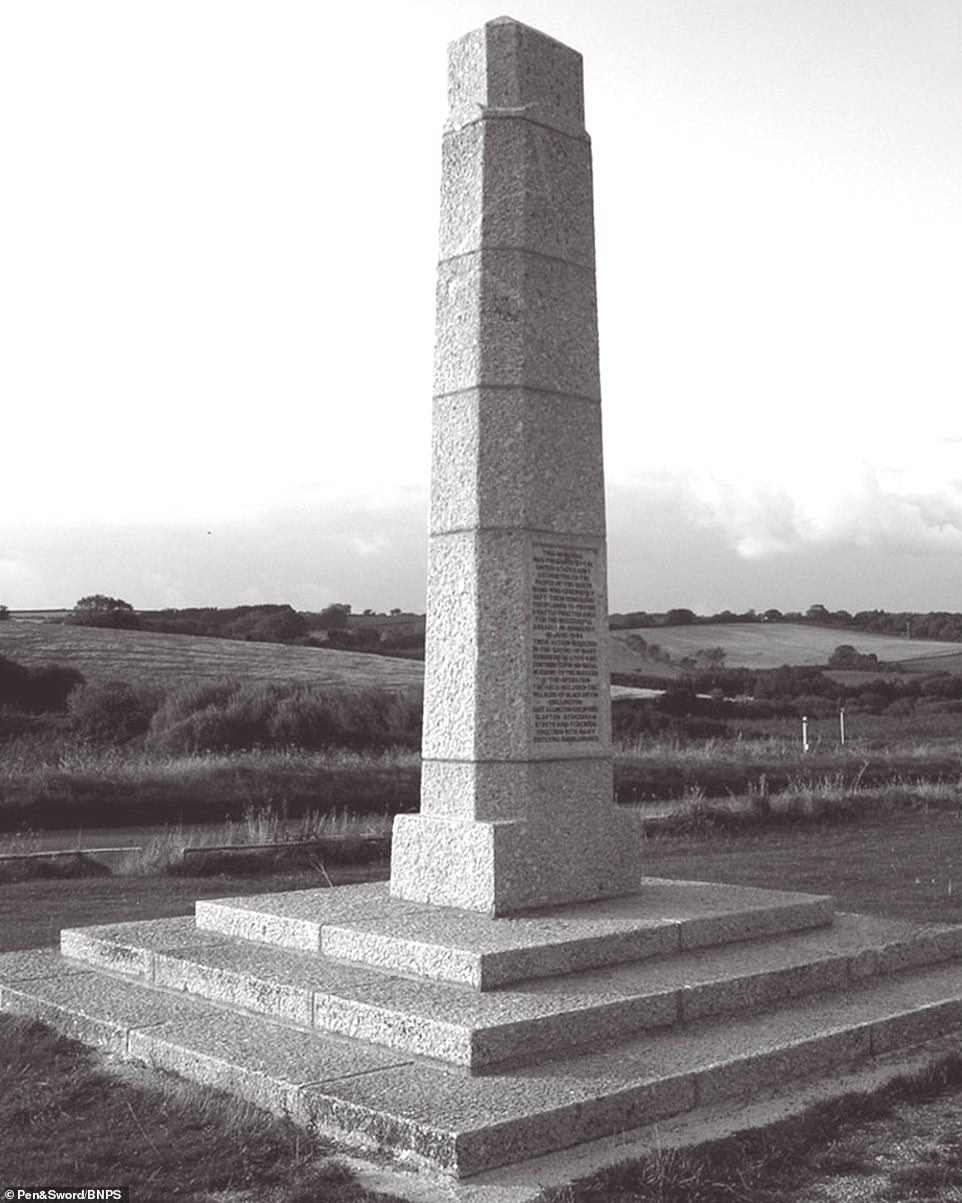 The victims of the tragedy, who were not acknowledged at the time of the incidents, were later commemorated at this memorial at Slapton Sands in Devon

To compound matters, it is thought the servicemen playing the role of the Germans on the coast were given live ammunition to fire at their fellow men.

Describing the ordeal, Mr Wynn said: ‘There was the friendly fire incident that occurred on April 27, 1944 when an undisclosed number of American soldiers were killed by friendly fire after a confusion over the start time of that day’s training exercise.

‘Shelling of the beach by the Royal Navy’s HMS Hawkins was originally planned to begin at 7.30am, but it was delayed by one hour until 8.30am.

‘Unfortunately, this change in the start time of the exercise was incredibly not passed on, which meant that rather than the subsequent artillery fire landing ahead of the disembarking American troops, it landed when they were already on the beach.

‘There has never be a definitive answer as to the number of men who were killed in that incident; estimates vary between 200 and 500. 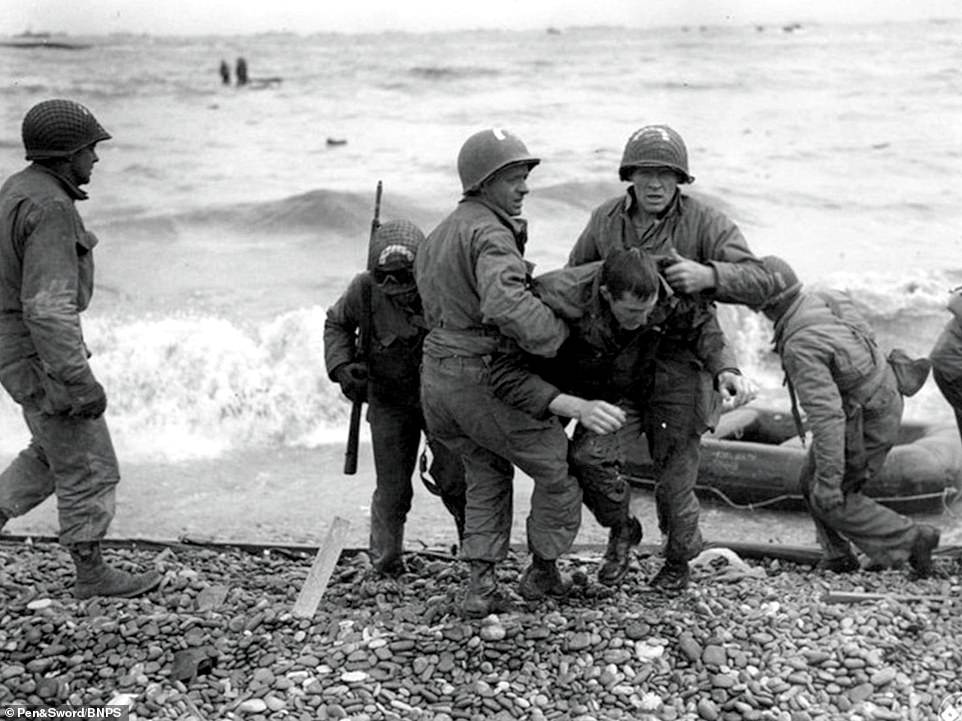 ‘This aspect of Exercise Tiger has never officially been recognised, confirmed or admitted by the American government or military authorities.

‘This seems somewhat strange, as America came clean about the E-boat incident way back in 1954, so why they wouldn’t confirm or clarify this aspect of the disaster is not clear.

‘What makes matters worse is that because of this stance nobody knows for sure where these men were buried.

‘Maybe their deaths were conveniently wrapped up with the casualty figures for the D-Day landings in Normandy.’

The following day, nine German E-Boats slammed without warning into Allied landing craft at the unprotected rear of the slow-moving convoy. 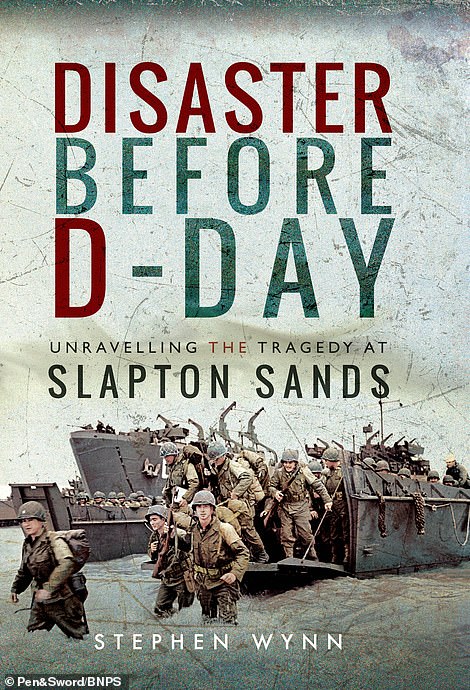 A British Navy destroyer which was supposed to be escorting them had been ordered into Plymouth for repairs.

And while a Royal Navy corvette HMS Azalea had spotted the German E-Boats, an error with radio frequencies meant the British naval headquarters ashore could not warn the Americans of the approaching danger.

Three landing crafts burst into flames and the men on deck were engulfed in clouds of blazing fuel from the exploding vehicles.

There was no time to launch life rafts and hundreds of servicemen drowned or died of hypothermia in the freezing sea.

Ironically, some of them were killed by their life jackets which were wrongly worn around their waists.

This turned the men on to their fronts and forced the wearer’s face and chest underwater.

The Allied commanders initially feared officers who went missing during the attack could have ended up in German hands, where they might reveal the Allied intentions for the D-Day landings.

However, the bodies of every one of those officers with top level ‘BIGOT’ clearance were found and the tactics of D-Day were thought to be secure.

Mr Wynn said: ‘There was a huge panic until the bodies of the 10 BIGOT clearance level officers’ bodies were found because they knew the D-Day plan.

‘It is remarkable that after Slapton Sands the Germans did not figure out what the Allies had planned with the invasion.’

Disaster Before D-Day, Unravelling the Tragedy at Slapton Sands, by Stephen Wynn, is published by Pen & Sword and costs £15.

D-Day: How Operation Overlord turned the tide of war in Europe

It is thought as many as 4,400 were killed in an operation Winston Churchill described as ‘undoubtedly the most complicated and difficult that has ever taken place’.