The Trump administration has not built a single new mile of border wall in the 30 months since President Trump took the oath of office — only replaced ‘dilapidated,’ existing fencing has been replaced.

The Washington Examiner reported that US Customs and Border Protection, which is tasked with overseeing Trump’s ballyhooed ‘big beautiful wall’ on the US-Mexico border, confirmed that all the fencing that’s been built during Trump thus far was ‘in place of dilapidated designs.’

In a statement, the agency said that 51 miles of steel bollard fence was built using money set aside during the 2017 and 2018 fiscal years, which was earmarked to fund the replacement of outdated fence and to build new fences where none had previously existed.

US Customs and Border Patrol confirmed that no new border wall has been built in the time since President Trump took the oath of office. Only replacement wall has been put up (file)

However, the agency said that so far, only replacement fences have been erected.

The agency said it is still putting together projects that would create fences in areas that did not have any before.

The Washington Examiner reported that a senior administration official said that CBP and the Army Corps of Engineers were quicker to replace old fences first, because it the environmental and zoning permits approval process for brand new fencing projects was more involved than replacing existing fencing.

In a statement to the media outlet, the official wrote that ‘The wall projects are moving along as quickly as practicably possible given the unprecedented obstruction from Democrat lawmakers to protect and prolong open borders.’

Thus far, Trump’s administration is said to have completed an average 1.7 miles of replacement border wall per month since he took office in January 2017, while 205 miles of new or replacement walls have been funded.

The Department of Homeland security said in a statement that CBP has built about 99 per cent of those 40 miles of replacement fence that were funded in 2017, as well as continuing to build 35 gates that would close the ‘gaps in current border infrastructure’ in Texas’ Rio Grande Valley sector. 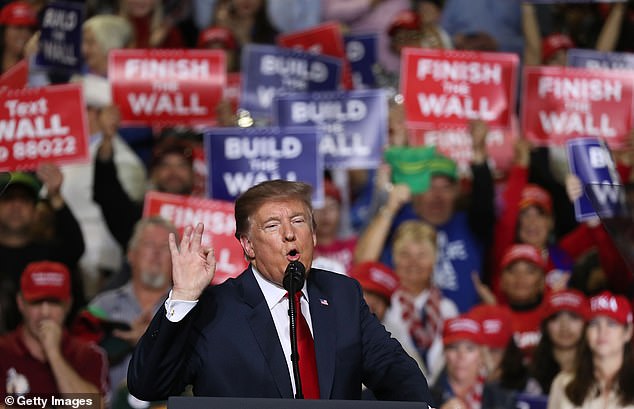 Despite the fact that no new border wall has been built where none previously existed, Trump debuted a new campaign slogan in February: ‘Finish the Wall’

In 2018, lawmakers added an additional $1.375billion to create 80 miles of new and replacement wall in the Rio Grande Valley, as well as parts of California and Yuma, Arizona.

Thus far, only about 10 miles of replacement wall have been built in those areas.

Despite this, Trump’s administration is claiming that large chunks of brand new wall, where none existed before, will be built before the president’s term ends.

In the spring, Army Corps Commanding Gen. Todd T. Semonite had claimed that the Corps would build 450 miles of wall by November 2020, although a portion of that length would be replacement fencing.

CBP recently said that it will be continuing to build the approximately 205 miles of wall that have been funded so far this year, using Treasury Forfeiture Fund money that Trump seized in February after the partial government shutdown.

Trump’s administration was sued for grabbing $6.6billion from the military and other departments to be used for building the border wall after Congress did not budge on giving him the money he wanted.

CBP said that some of the remaining 85 miles that have not yet been built but have been funded in 2019 is meant to include brand new wall, where there was none before.

Trump does not appear to have made a point of highlighting the fact that only replacement walls have been built under his administration thus far.

Instead, he debuted a new campaign slogan at a rally in El Paso, Texas: ‘Finish the Wall.’

It was reported that when his supporters started chanting the familiar ‘build that wall’ refrain, Trump said, ‘Now, you really mean “finish that wall,” because we’ve built a lot of it.’