President Donald Trump said Monday morning that the U.S. economy ‘is looking really good’ as the prospect of a trade war between the world’s two largest economies sent shock waves around the globe.

Trump said in a tweet, ‘The underlying strength of companies has perhaps never been better.’

The tweet followed a revelation this morning that Trump’s administration sent China a trade to-do list last week in a bid to reduce a massive trade deficit the U.S. president says he will address with stiff new tariffs on on Chinese goods.

President Donald Trump said Monday morning that the U.S. economy ‘is looking really good’ as the prospect of a trade war between the world’s two largest economies sent shock waves around the globe

The tweet followed a revelation this morning that Trump’s administration sent China a trade to-do list last week in a bid to reduce a massive trade deficit the U.S. president says he will address with stiff new tariffs on on Chinese goods

Treasury Secretary Steven Mnuchin and U.S. Trade Representative Robert Lighthizer listed steps that Washington wants China to take in a letter to Liu He, a newly appointed vice premier who oversees China’s economy, the Journal said, quoting sources with knowledge of the matter.

The newspaper reported that Mnuchin was considering a visit to Beijing to pursue negotiations.

Mnuchin said Sunday on Fox News that he is optimistic that a deal can be struck but the U.S. is proceeding for now with its planned tariffs.

Fears of a trade war mounted earlier this month after Trump first slapped tariffs on steel and aluminium imports, and then on Thursday specifically targeted China by announcing plans for tariffs on up to $60 billion of Chinese goods.

On Friday, China fired a warning shot in response to the U.S. tariffs on steel and aluminium by declaring plans to levy additional duties on up to $3 billion of U.S. imports. The list of targeted goods made no mention of soybeans or aircraft, China’s two biggest U.S. import items.

China’s third-biggest U.S. import category – motor vehicles – totaled $10.6 billion in 2017, about 8 percent of the country’s overall U.S. imports by value, according to data from the U.S. Census Bureau.

China currently has a 25 percent tariff on U.S. cars.

A U.S. Treasury spokesman confirmed the call, but declined to comment on the content of any letter or on a possible visit by Mnuchin to Beijing.

‘Secretary Mnuchin called Liu He to congratulate him on the official announcement of his new role,’ the spokesman told Reuters. ‘They also discussed the trade deficit between our two countries and committed to continuing the dialogue to find a mutually agreeable way to reduce it.’

‘I’m cautiously hopeful we reach an agreement, but if not we are proceeding with these tariffs,’ the Cabinet official said. ‘We are not putting them on hold unless we have an acceptable agreement that the president signs off on.’ 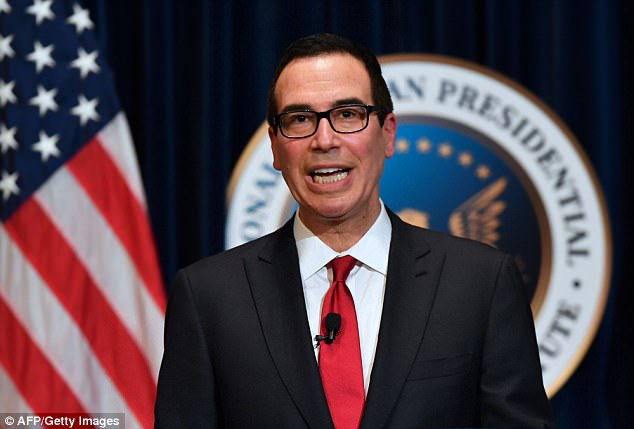 Treasury Secretary Steve Mnuchin said Sunday that he is optimistic that a deal can be struck but the U.S. is proceeding for now with its planned tariffs

Chinese foreign ministry spokeswoman Hua Chunying was later asked at a daily press briefing about Mnuchin considering a visit and whether China was willing to invite him.

‘We have always said China is willing to negotiate to appropriately manage and control differences with the United States on the basis of mutual respect and mutual benefit,’ Hua said.

‘Our door to dialogue and consultations has always been open.’

The Trump administration has demanded that China immediately cut its staggering $375 billion trade surplus with the United States by $100 billion.

‘The U.S. has been wielding sticks worldwide over the past year. Washington needs to be taught a real lesson and such a lesson can only be taught by China, the world’s second-largest economy,’ Global Times said in an editorial.

The widely-read tabloid is run by the ruling Communist Party’s official People’s Daily, although its stance does not necessarily equate with government policy.

‘What we have to recognise is China hasn’t measured up to the things we expected of them, in terms of the trade relationship,’ said William Cohen, chairman of Cohen Group, a Washington-based advisory firm.

‘My hope is that they will see this is not the way to go, that we do have to sit and work out an arrangement where the Chinese understand you can’t do business the way they’ve been doing business,’ the former U.S. defence secretary told Reuters on the sidelines of a forum in Beijing on Sunday.

A commentary published by Xinhua warned the United States against provoking retaliation by China.

‘Washington should take Beijing’s stance seriously and do not be penny wise and pound foolish, which will hurt itself and others as well,’ Xinhua said

Beijing could also inflict pain on U.S. multinationals that rely on China for a substantial – and growing – portion of their total revenues, said Alex Wolf, senior emerging markets economist at Aberdeen Standard Investments.

‘This could put U.S. companies such as Apple, Microsoft, Starbucks, GM, Nike, etc. in the firing line,’ Wolf said.