If you ever find yourself tempted to live in a house that’s painted a millennial pink – perhaps with elegant steps up to the front door and a cherry tree outside – you’d better be prepared to also acquire a dobermann and an unphotogenic barbed-wire fence. That’s unless you want your home to become a mecca for an entire internet community. As the amateur and professional worlds of fashion blogging (and vlogging and Instagramming) have evolved over the past decade or so, a peculiar convention has sprung up within them: the phenomenon of getting your photo taken, in an array of carefully styled outfits, while posing outside someone else’s home.

Almost every fashion influencer does it. Among the recent posts of Rosie Thomas (Instagram followers: 334,000) are sky-blue townhouses, a building with intriguing checkerboard steps and one with pretty foliage peeping through lacquered railings; but I’d bet good money that none of these is her home. Sophia Rosemary (followers: 184,000) poses against Manchester and Stockport’s red brick and stone; Susie Lau (followers: 448,000) favours leaf-strewn East London streets.

They make it look effortless – ish – but there’s plenty going on behind the scenes of these shoots, which can involve an hour or so of walking around a few carefully selected streets. ‘It’s not very glamorous because it often involves me lugging a small suitcase of a few outfits, and sometimes having to sneakily get dressed on the side of the street,’ confesses Joanne Hegarty of The Stylist and the Wardrobe (followers: 50,800), who is charmingly sheepish about the whole thing. ‘If there’s a loo in a local coffee shop then we’ll be discreet and go in there – but there have been situations where I’ve been in an alcove with the photographer standing in front of me while I try to put on a skirt.’

Why use someone else’s street as your backdrop? Firstly, the light is better outside, more likely to make you look bright-skinned and full of fashionable joie de vivre. Next, the chances are slim that your own front aspect is photogenic enough to share with thousands of judgmental strangers: due to a combination of weather damage, wheelie bins and discarded leaflets for the local letting agent, most building exteriors just aren’t projecting a look that says ‘fashion’. ‘For us it’s about portraying that glamorous lifestyle,’ explains Philippa Bloom who, along with Sarah Ellis, forms the blog We Are Twinset (followers: 111,000). They largely model high-street clothes and use backdrops to make those outfits look more upmarket. ‘We always choose roads that are really clean, crisp and quite minimal. The aesthetic of the photos just feels a lot more luxe when you’re in Notting Hill, compared to standing outside a residential three-bedroom semi in your local town.’

That affluent West London neighbourhood might well be the most Instagrammed location in the country. Certainly among fashion bloggers it’s wildly popular, particularly for its ice-cream streets. ‘We normally hit Notting Hill for our shoots because that’s where all the pretty pastel houses are,’ confirms Natasha Poliszczuk (followers: 22,700), a freelance journalist and co-founder of the blog Wear and Where. North London’s Primrose Hill is also a hit for its rainbow houses – just think of Chalcot Crescent, where the Paddington movies were filmed – as is Kentish Town, although Poliszczuk confides that most bloggers avoid it because the pavements often feature unsightly bins.

‘Basically, if you paint your door pink, you’re asking for it,’ says Katherine Ormerod (followers: 50,400), journalist and editor of the blog Work Work Work. ‘There are going to be a lot of people who’ll want to use that as a background for their picture. I live on the edge of Notting Hill and you see queues of young kids standing outside certain streets and properties, all waiting their turn to have their picture taken.’

There are other elements that attract the fashion brigade like a barbecue attracts wasps. A mews is a guaranteed hit: search #KynanceMews on Instagram and you’ll find hundreds of women posing under the ivy-smothered arch at the end of a Kensington cul-de-sac – an orgy of tartan miniskirts, suede thigh-high boots and tumbling, tonged curls. ‘You can take your picture outside someone’s property without other people looking at you, and there aren’t as many people on the street getting in the way of your shot,’ says Ormerod. A mews also tends to be free of double-yellow lines, which as she explains, ‘can really mess with people’s colour palettes’.

You can imagine the pleasurable endorphin peaks these expert posers experience as the likes come flooding in. To some degree, most of us have enjoyed similar attention online, even if yours was more of a holiday snapshot than a fashion shoot. But spare a thought for innocent bystanders. Laura lives in one of the grand terraces of Liverpool’s Georgian Quarter: ‘I often look out of the window or open the door to find a fashion shoot going on – models posing with photographers and lighting assistants,’ she says. ‘Generally I don’t mind because it’s a lovely street, but it can be uncomfortable when you accidentally interrupt a shoot coming or going from your home and everyone’s waiting for you to go past, or when you approach the window starkers to find people pointing their cameras at it.’

One exasperated resident of Notting Hill who prefers to remain nameless – having garnered plenty of unwanted attention already – tells a darker story of visitors to his picturesque doorstep. ‘They don’t ask permission,’ he says wearily. ‘And they don’t usually just take one picture and go. Some turn up with a suitcase and have two or three outfit changes. They use your railings to hang their clothes on, sit on your steps and stand on cars to get a different angle – then leave their coffee cups behind. It makes it difficult to get out of your house or up the steps with your shopping. They even go down the basement steps and take pictures of themselves there.’

Bearing this in mind, it’s startling to discover the internet is full of lists of the ‘Most Instagrammable Locations’ – an A to Z of your front doors, or at least the best-looking ones. The hotspots of all the UK’s cities and villages are at the fingertips of anyone en route with a smartphone and a suitcase of clothes. That’s not to say that all fashion bloggers behave badly; when I tell Ormerod about the snappers harassing our anonymous Notting Hill resident, she shrieks in horror. ‘People are insane!’ she says. She’s never had a complaint while shooting. ‘It’s behaviour like that that gives the rest of us a bad reputation. There’s a level of manners that people are losing along the way. The rule is always if you can ask, then do – and never go on to someone’s property. It’s just general decency and courtesy.’ 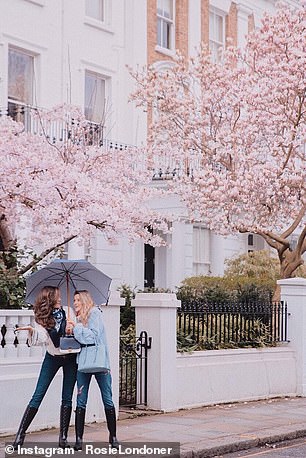 Among the recent posts of Rosie Thomas are sky-blue townhouses, a building with intriguing checkerboard steps and one with pretty foliage peeping through lacquered railings 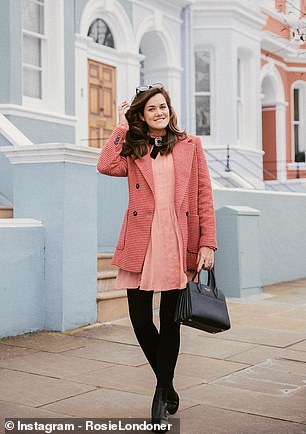 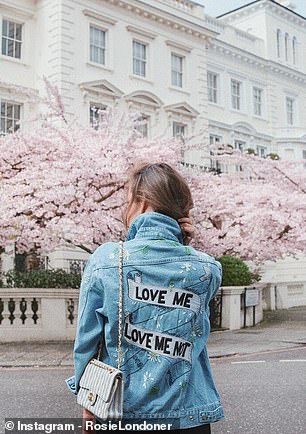 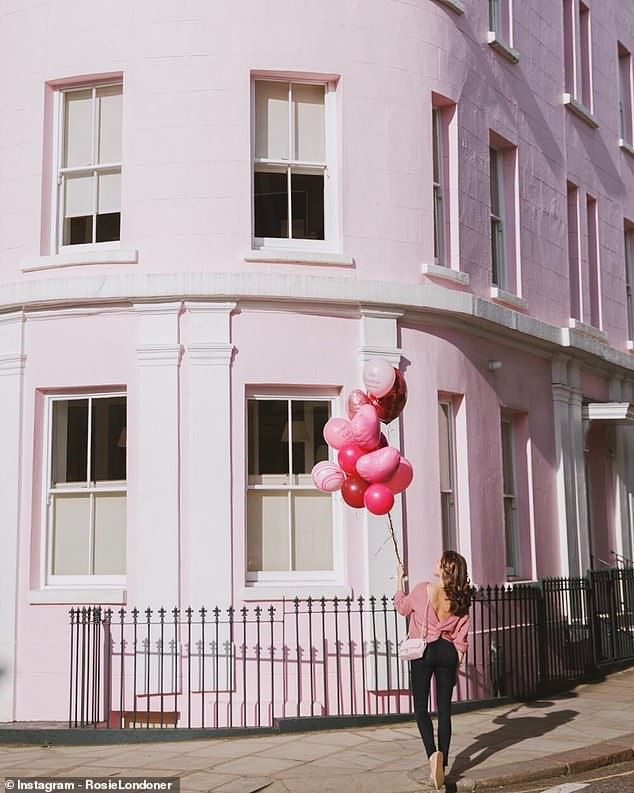 ‘The photoshoots are fun, playful and, most of the time, full of surprises and creativity,’ said one couple who frequently see photoshoots on their street

I speak to Theresa, who lives in Brighton, where there is a buzzing community of influencers. She knew nothing about the fashion-blog world and was taken by surprise when her house, with its lovely shutters and Farrow & Ball front door, became an unofficial shoot location. ‘One day I looked out of the window and there was a girl posing on my wall – fully made-up and quite trendy,’ she says. Bemused, she went out to investigate and discovered that this young woman, who was there with her father and a photographer, was taking snaps for her 50,000 followers.

‘She wasn’t really doing any harm,’ says Theresa, chuckling. ‘But some of the outfits were quite provocative. I’m a middle-aged woman with my Marks & Spencer gear on.’ The blogger’s father ran a building company, she adds. ‘I missed a trick – I should’ve asked him to paint the wall.’

At their less intrusive end, these shoots are often a source of entertainment for the locals. I receive an email from Olivier and Geoffroy, who live on the aforementioned Kynance Mews: ‘It does not bother us at all, and we find it amusing. The photoshoots are fun, playful and, most of the time, full of surprises and creativity. It is wonderful for us to see how inspiring the place can be for young talents, eager to capture their vision and use social media to share their sense of beauty.’

We Are Twinset have received proud comments online from residents along the lines of, ‘I saw you taking this picture! You’re on my street.’ One of Poliszczuk’s recent shoots took place on Bywater Street in London’s Chelsea, which is, she admits, ‘laden with bloggers and tourists. A woman came out of her house as we were being photographed and we said, “Sorry, this must be really irritating.” She said, “Oh, we’re so used to it, darling! This morning there was a giant ad campaign here.’’’

There’s an etiquette to this audacious behaviour: a good influencer will not only be polite and respect the boundaries of your home but they’ll also be careful to crop out street names or house numbers that could identify the address. If your visitors aren’t showing this courtesy, Ormerod suggests that you go straight to tough tactics. ‘If it were me and I were really annoyed, I’d try a “Trespassers will be prosecuted” sign. I think people would stop pretty quickly.’ Alas, our anonymous friend in Notting Hill has tried exactly this. ‘We put a sign up saying, “These stairs are private property – please stay off at all times” but they often just move it,’ he says sadly.

You could take the ‘If you can’t beat ’em, join ’em’ approach and start your own blog, of course, since the most desirable location is literally on your doorstep. Or, for your mental health, try to take the attention as a compliment to your good taste. ‘I would be flattered! Wouldn’t you, if you lived in one of those houses?’ says Poliszczuk. ‘I mean, if you’re lucky enough to live on Chalcot Crescent, I think maybe you could overlook a few people snapping pictures.’ Then she reconsiders: ‘Although that one is absolutely heaving.’