The ultimate Australian snack: Butcher creates a BURGER PIE – complete with stacks of beef, Vegemite and lashings of melted cheese

By Alice Murphy and Cindy Tran for Daily Mail Australia

A butcher has created the ultimate Australian cheeseburger by sandwiching stacks of beef and slices of cheese between two Vegemite pies.

A tower of four patties dripping in melted cheese, lashings of pickles and tomato sauce is wedged between thick pies stuffed with more cheese and Vegemite – the nation’s favourite spread.

Mr Caldwell knew he had found the perfect combination of iconic Australian and American cuisine when he stumbled across the Vegemite and cheese pies in a bakery near his home.

A butcher in Western Australia created this meat pie cheeseburger in celebration of Australia Day on January 26, stacking beef patties, melted cheese and lashings of tomato sauce inside two Vegemite and cheese pies

He loaded the dish with four patties to set it apart from other creations on the market, taking the sandwich to a weight of almost one kilogram – the same as a large pineapple.

But when he sat down to sample his own recipe, the burger was so enormous he had to forego cutlery.

‘Believe me, eating it wasn’t pretty! It weighed nearly a kilo and I didn’t have to eat for the whole day afterwards!’ Mr Caldwell told Taste.com.au.

Meat lovers have been drooling over the decadent dish since photos were shared on the butcher’s Instagram account earlier this week.

The mouthwatering fusion comes days after an American-style diner in South Australia launched a double beef and cheese burger sandwiched between iconic lamington cakes in celebration of Australia Day. 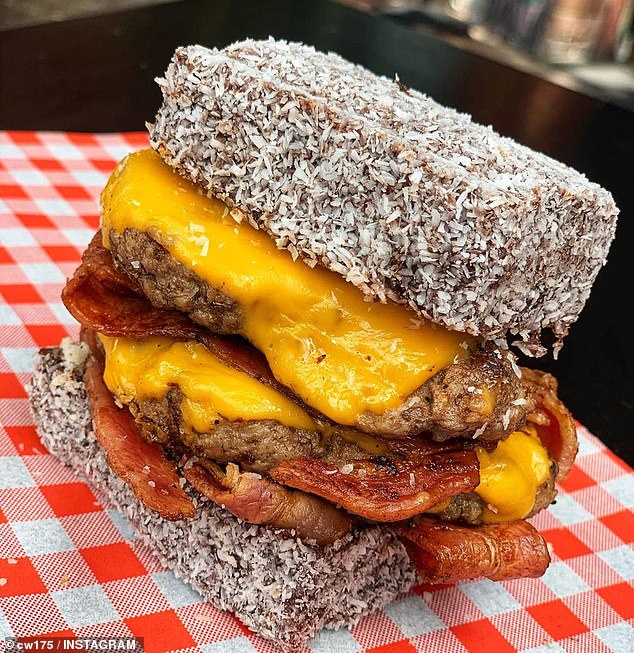 North Adelaide restaurant Chuck Wagon 175 is offering diners the chance to feast on the epic creation until Sunday, February 2.

The unusual sweet and savoury fusion comes with double beef patties, crispy bacon and lashings of melted cheese, with the nation’s favourite coconut sponge cake used in place of bread.

But while many were eager to taste it, others asked why the restaurant had left out popular ingredients like pickles, egg and sliced pineapple.

‘Who on earth thinks up these things? Would never have thought to put these things together. Leave the lamington alone,’ said another.