It certainly looks rather uncomfortable if you’d have moved, with its low stature and large ridges in the seat – and that happens to be precisely the point.

For this is a ‘mugshot chair’ used in Victorian prisons that would have seen inmates want their photograph taken as fast as possible or left in plenty of pain.

Prisoners would have had to sit up straight with their legs together and ensured they did not move so their picture could be taken quickly in the jail.

The chair was designed so the head of the inmate would be in line with the brace at the back of it – and in the same place whether they were small or tall.

It was intended to be quick and hassle-free and helped jails comply with the 1871 Prevention of Crimes Act that said prisoners had to be photographically recorded.

The idea was that a photographer could set their camera up for the day with the correct height and focus, and then only have to touch it to take the picture.

To ensure they could get two angles of the prisoner – face-on and in profile – they would have set up an angled mirror to produce both pictures in one shot.

Prisoners would also be asked to show their hands when the photos were taken, to ensure any identifying marks or tattoos could be noted at the same time. 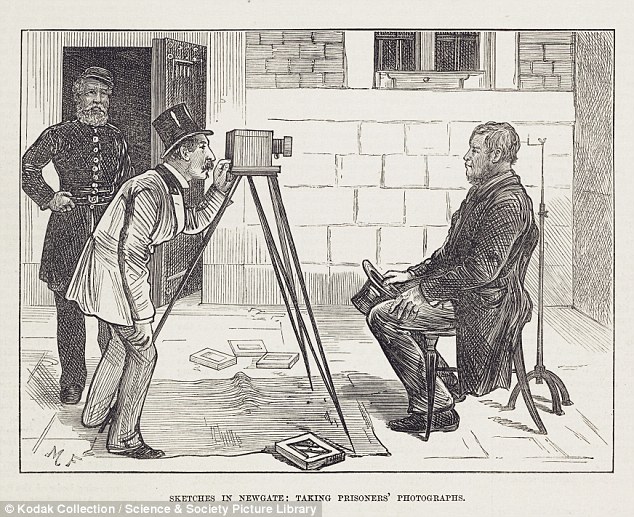 A photographer takes an inmate’s picture using the chair at Newgate Prison in London in the 19th century. The chair helped jails comply with the 1871 Prevention of Crimes Act

Geoff Belknapp, curator of photography at the National Science and Media Museum in Bradford, told MailOnline that the chair was first made in Germany around 1880.

He said: ‘The chair is small and narrow – just 25cm (10in) in width and approximately 90cm (35in) high, with a pointed ridge running front-to-back down the centre.

‘Despite its appearance the design isn’t intended to specifically make it uncomfortable for the sitter.

‘The reason there is a ridge down the centre of the seat and a metal rod at the back is so all sitters are positioned for their photographs in the same way – sat up straight and facing forward.

‘I imagine it would have been uncomfortable had anyone tried to move from this position. 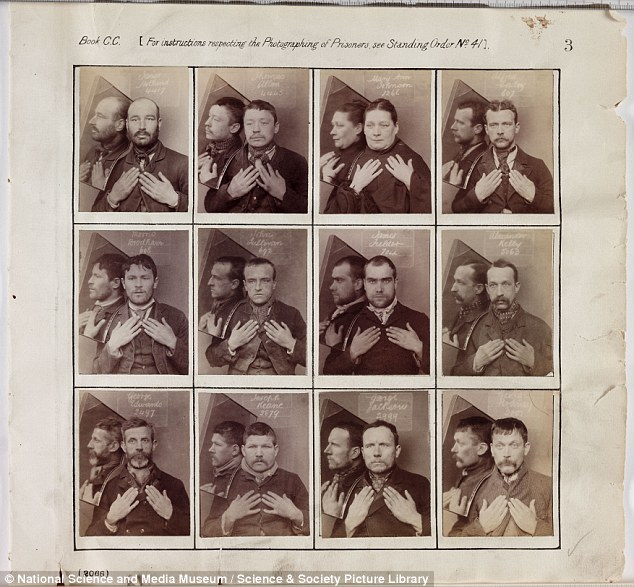 Mugshots taken of prisoners in the late 19th century, showing a mirror placed on the inmate’s right shoulder to capture their profile. These portraits are unusual compared with the standard of prison photography at the time, by combine the profiling and frontal portrait in one picture 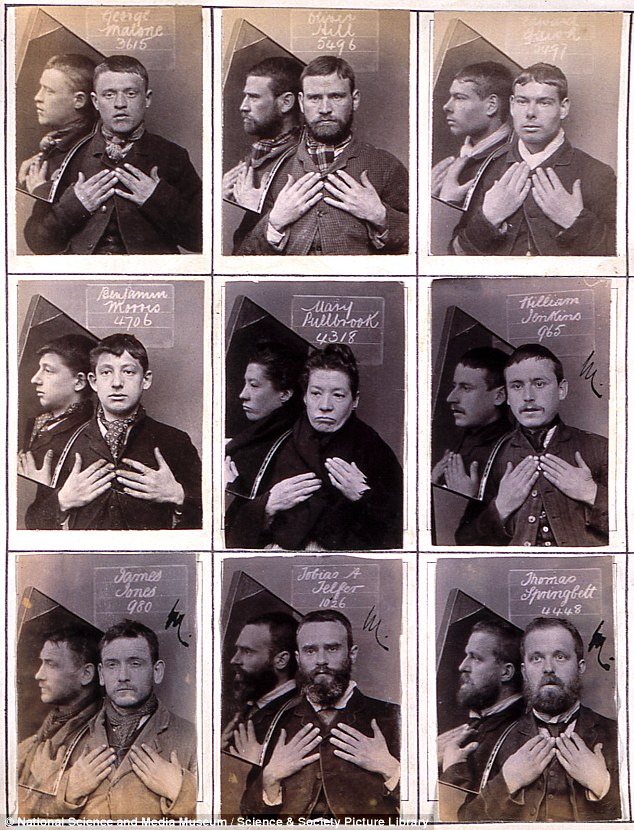 The use of photography to record known criminals had been in evidence as early as the 1840s, three decades before it became UK law. Pictured: More mugshots using the mirror technique

‘The intention was for the photographs to display a standard pose and posture for each sitter. The chair ensures the sitter sits as straight and upright as possible, and the brace is to keep the head looking forward.’

He added that the concept of the two-angle photograph was apparently pushed forward by Alphonse Bertillon, a French police officer born in Paris.

The use of photography to record known criminals had been in evidence as early as the 1840s, three decades before it became law in the UK.

Mr Belknapp continued: ‘Bertillon helped to standardise the process when, in 1888, he devised the modern “mug shot” featuring full face and profile views, as well as standardising the lighting and angles.

‘His method was soon adopted in many places throughout Europe. However, as you can see from the other sets of mug shots – there were other methods employed to get the two-angle shots, such as holding a mirror up to the suspect’s face.’