More than a third of the US population eats fast food every day, a new report warns.

The mainstays of take-outs – processed meat, sweetened bread, fried food and fatty sauces – are linked to chronic health conditions such as diabetes and heart failure, the number one killer in the world.

But despite public health campaigns, new figures released today by the Centers for Disease Control and Prevention (CDC) show that 37 percent of US adults are not taking the message to heart.

Adults aged between 20 and 39 were the most likely group to consume fast food, with almost half (45 percent) admitting they eat junk food.

Adults between ages 20 and 39 were the most likely to consume fast food with about 45 percent, according to a new CDC report (file mage)

For the report, researchers analyzed data from the National Health and Nutrition Examination Survey between 2013 and 2016.

The survey assesses the health of adults and children in the US and tracks changes over time, looking at who eats it (age, income, gender) and how they eat it (where and when).

After the age of 40, Americans’ fast food consumption steadily declines, the study showed. About 38 percent of adults aged 40 to 59 ate fast food daily while just 24 percent of those aged 60 and above did the same.

Most adults reported eating fast food at lunch and dinner, at 43.7 percent and 42 percent respectively.

Liz Weinandy, a registered dietitian at The Ohio State University Wexner Medical Center, conceded that it’s unsurprising that younger people eat the most fast food, but she said the rates are very concerning.

‘These people probably grew up with fast food, and they’re not cooking as much, setting themselves up for conditions like obesity and type 2 diabetes,’ she told Daily Mail Online.

Weinandy, who was not involved in the CDC report, said another concern is that this age 20-39 group is also the group most likely to have young children.

‘So by exposing their children to fast food early on, they’re getting kids into unhealthy patterns from a young age,’ she said.

Though it does take two to conceive, and often to parent, women at least make more of an effort to cut out fast food.

‘Anecdotally, I know women are much more likely to pack their lunches and I see a lot of women eat salads because they’re trying to watch their weight whereas men will eat a substantial meal where it’s a burger or fries or whatever,’ said Weinandy. 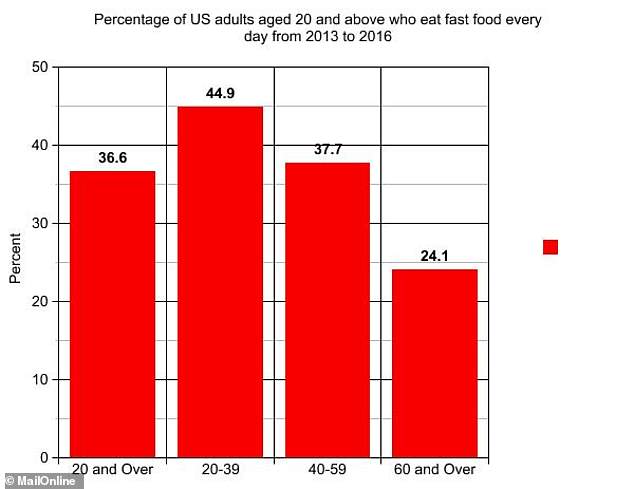 Despite the 20-39 age group eating the most fast food, consumption actually deceased with age, the CDC figures revealed

Regarding the fact that those who came from higher-income households were 1.3 times more likely to eat fast food on a given day than people from lower-income homes, Weinandy said her guess is that higher-income people ‘are eating out more in general across the board and fast food falls into that category.’

But, she added: ‘I notice more and more people with lower incomes say it costs too much to even out at a fast food place and that cooking at home is cheaper.’

Weinandy said while it’s not realistic to tell people not to eat fast food, she would like to see healthier options.

‘Things like poultry, fish, even leaner cuts of red meat – also picking more water and staying away from sugar-sweetened beverages and diet soda,’ she said.

She added that despite fast food establishments saying they’re offering healthier options – they merely have the perception of being healthy.

‘For example, a grilled chicken sandwich is healthier than a cheeseburger but they inject the chicken with a sodium solution so what you’re eating is high in salt content,’ she said.

‘We have got an overabundance of highly processed foods that are very cheap and very easily available,’ she said.

‘Either through subsidies to farmers or taxes put on sugar-sweetened beverages and processed foods to decrease the abundance.’

She adds that it’s also up to primary care physicians to talk their patients about the dangers of eating too much fast food.

‘We know that people who are overweight or obese are more likely to be eating fast foods, but people really listen to their doctors,’ Weinandy said.

‘And from there, you’re establishing good behavior for kids to follow.’