History is traditionally a dull subject – but these photographs bring it to life in jaw-dropping fashion.

They are the winners and short-listed entries in the second Historic Photographer of the Year Awards.

This year’s competition – run by Trip Historic, an online travel guide to the world’s historic sites – has attracted astonishing entries from amateurs and professionals who have climbed, hiked and trekked their way to snap stunning historic places from every corner of the globe, from iconic landmarks to far-flung forgotten ruins.

The overall winning image of the medieval island commune of Mont-Saint-Michel was shot by Daniel Burton. He takes home the £1,000 prize.

Entries were judged on originality, composition and technical proficiency alongside the story behind the submission and its historical impact. The judging panel of experts included broadcaster and historian Dan Snow, who said that ‘this year’s winning entries and submissions perfectly showcase just how stunning the history all around us can be’.

Scroll down to see the winners and our pick of the short-listed entries.

This shot of Mont-Saint-Michel by Daniel Burton was declared the overall winner. He said of his amazing picture: ‘It is one of the most recognisable and visited historical landmarks in the region [of Normandy]. The surrounding bay provides more peace, however. This photograph, taken during the spring tide in early March 2018, shows the curious land formations known locally as Les Méandres. The channels fill up in late afternoon and reflect the setting sun to create a mirror pool effect’ 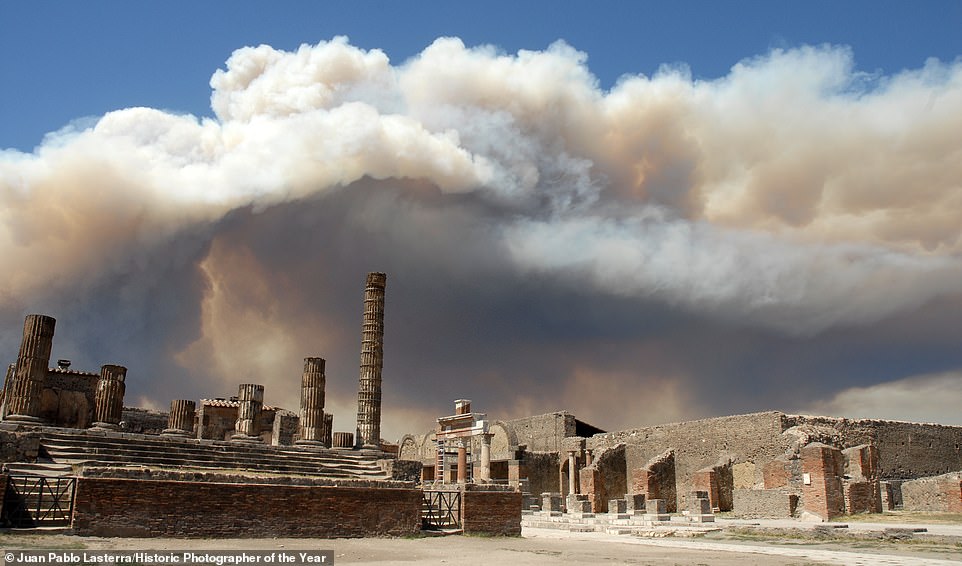 In this short-listed image by Juan Pablo Lasterra, dense smoke clouds produced by a forest fire on Mount Vesuvius hang over the ruins of Pompeii, Italy 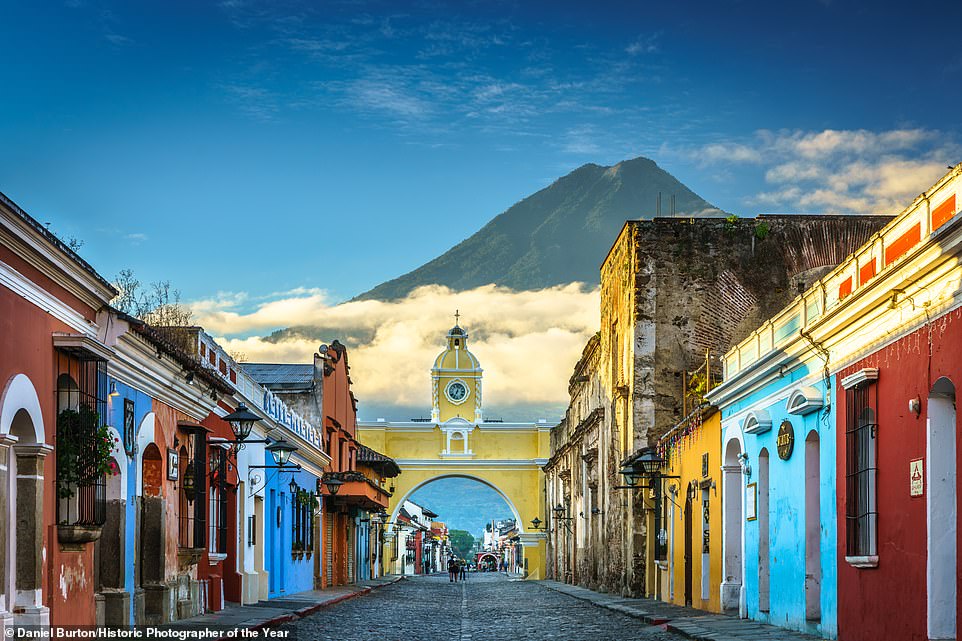 The Santa Catalina Arch in Guatemala’s city of Antigua is an icon of a lost colonial masterpiece, says Daniel Burton, who took this short-listed image of it. He added: ‘The city was founded by conquistadors in 1543 and later became one of the most celebrated in the Spanish indies. It lies in the shadow of Volcan Agua, but a series of brutal earthquakes decimated the settlement, causing its abandonment in 1773. Antigua Guatemala lay in ruins until it was declared a national monument in 1944. It is now the darling of the tourist trail, and the arch its centrepiece’

Ben Nazarko was short-listed for this ethereal image of the West Pier ruins in Brighton. He says: ‘This iconic pier sadly tells of past glories but remains the main focal point of Brighton Beach’ 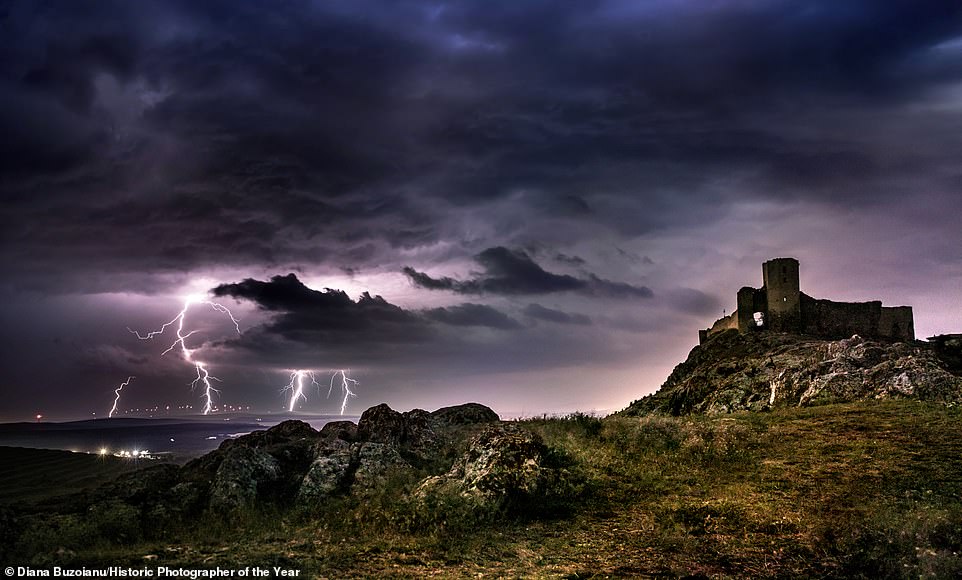 This image of the fortress at Enisala in Romania by Diana Buzoianu was short-listed. She says: ‘The first sight of Enisala can make any passerby wonder about its history. With a flourishing city that was part of the Northern Loop of the Silk Road, Enisala was a vibrant place on a commercial route, with a strategic fortress to guard it closely. Today you can still hear the tales of the merchants in the whispers of the wind and that famous Silk Road is now visited by thousands of birds after a long migration, eager to have a rest and a well deserved break in one of the most beautiful surroundings of the region of Dobrogea in Romania’ 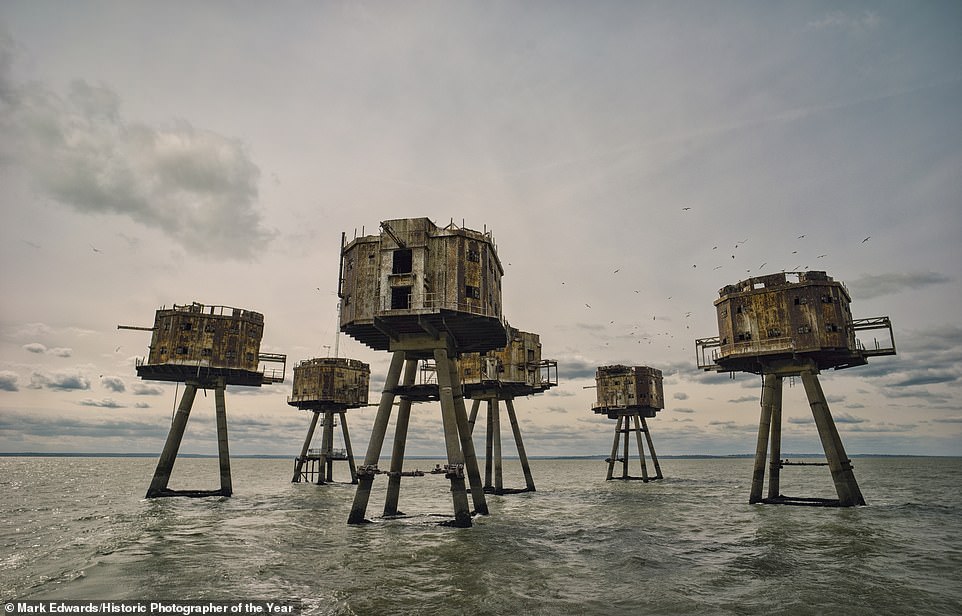 This image of the amazing, other-worldly Second World War forts in the Thames Estuary – known as Maunsell Forts – by Mark Edwards scooped him the gong in the English History category 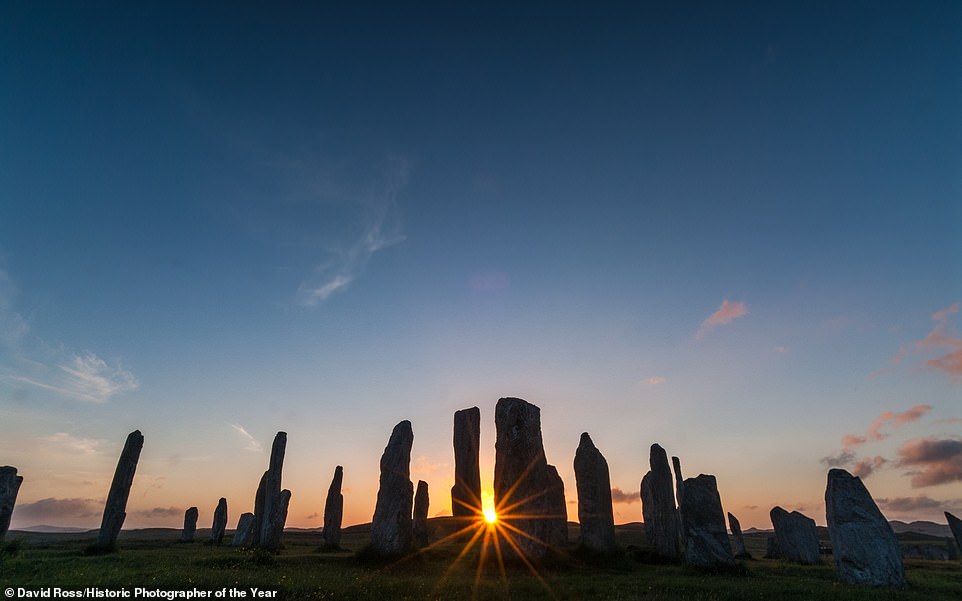 David Ross scooped first prize in the Ancient History category for this beautiful shot of the Callanish Stone Circle on the Isle of Lewis in Scotland. He says: ‘I’ve always loved the atmosphere of prehistoric sites, and I made a special trip to the Isle of Lewis in the hopes of good weather to photograph the stone circle at Callanish. To say I was lucky is an understatement! My first evening on Lewis was clear and there was no one else visiting the stones. I was able to catch this photo just before the sun sank below the horizon. It was a magical moment and one that I will always treasure’ 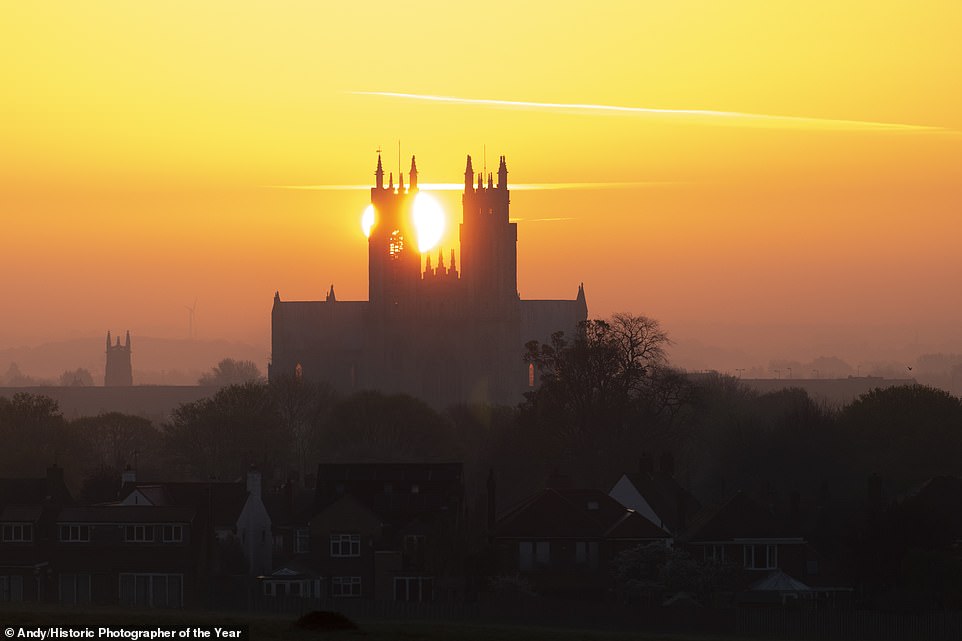 The photographer who took this amazing shot of Beverley Minster in Yorkshire – known only as ‘Andy’ – said that it took him almost 10 years for the right conditions to materialise. It was taken from Westwood Common and was short-listed

This short-listed image by Rose Atkinson is of Vicars’ Close in Wells. She explains that it was built over 650 years ago to house the Vicars Choral (the men of the Wells Cathedral choir) and has since been continuously inhabited by their successors. It’s the most complete example of a medieval close in the UK and is said to be the oldest purely residential street in Europe 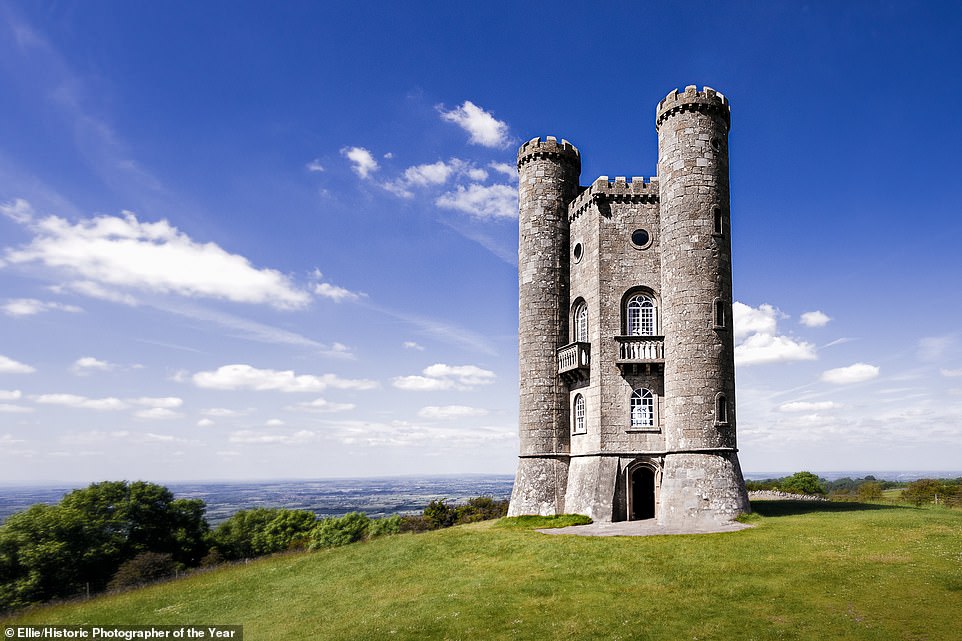 This picture of Broadway Tower in Chipping Campden was short-listed. The photographer, ‘Ellie’, says that on a clear day from this vantage point it’s possible to see across 16 counties

This image by Jonathan Reid of Donnington Castle was short-listed. Mr Reid says: ‘I was struck by the beauty of the ruins, enhanced even further by the autumn colour and surrounding countryside’ 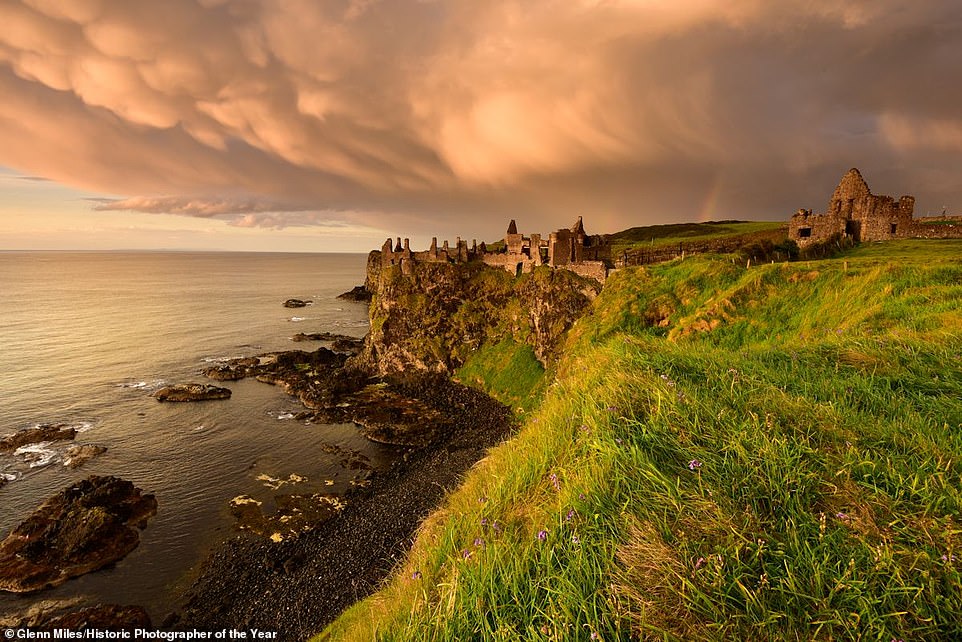 This moody image of Dunluce Castle on the north Antrim coast of Northern Ireland was short-listed. The first castle on this site was built in the 13th century by Richard Og De Burgh, the 2nd Earl of Ulster 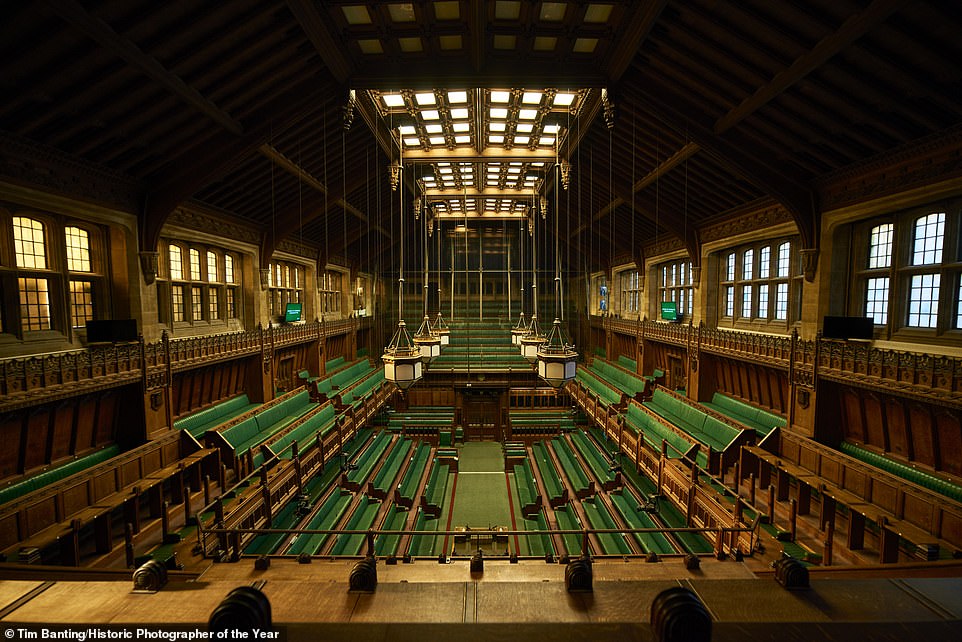 This short-listed picture offers a unique view of the House of Commons chamber in the Palace of Westminster. It was taken from the Press Gallery above the Speaker’s Chair 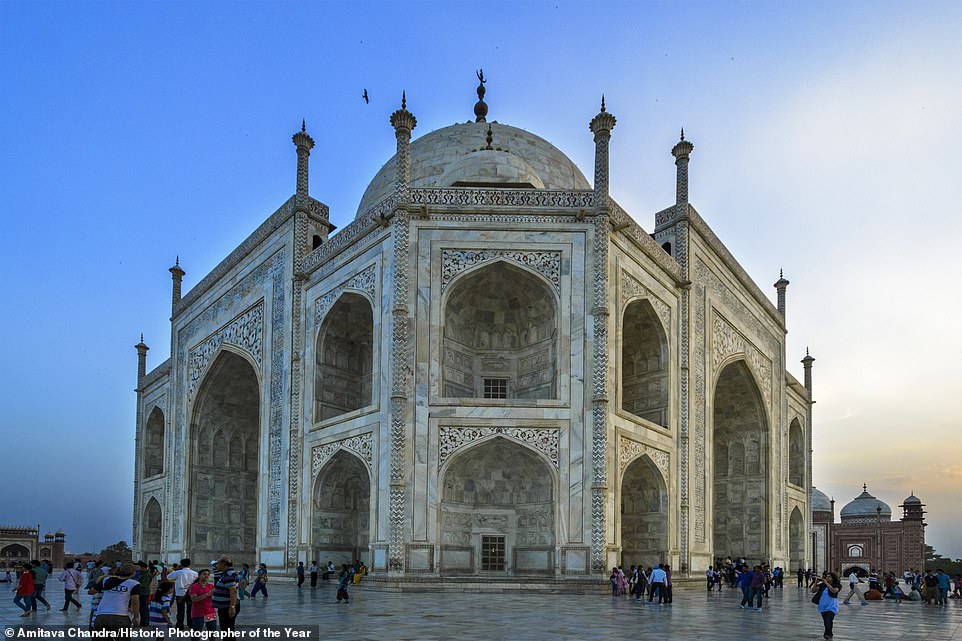 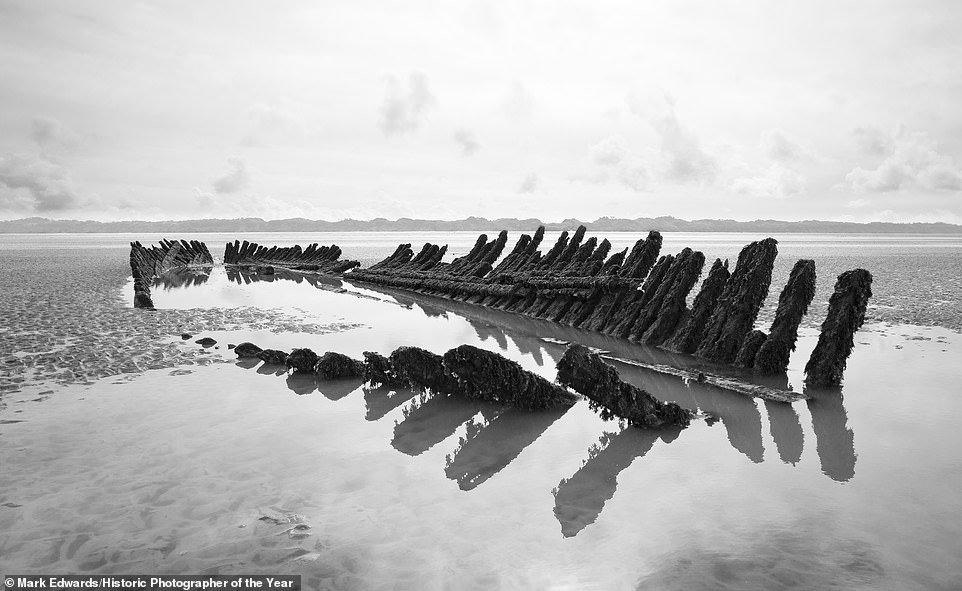 Mark Edwards snapped this short-listed picture of the remains of the 19th-century Norwegian ship the SS Nornen, which lies in Berrow, Somerset 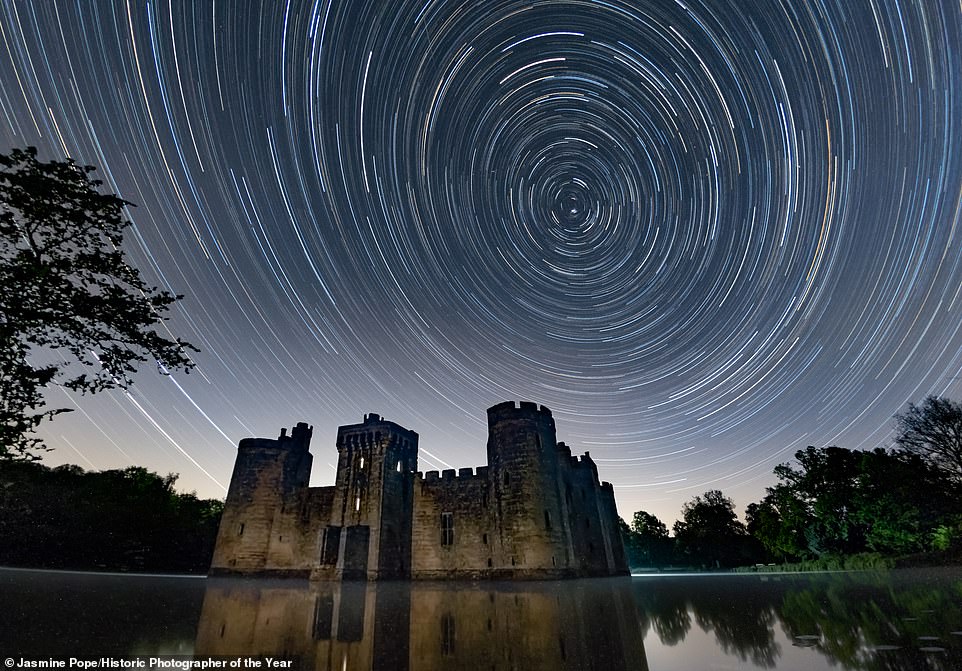 Jasmine Pope took several images over the course of three hours to produce this mesmerising image of 14th-century Bodiam Castle in East Sussex, which was short-listed. She says: ‘Bodiam Castle has always fascinated me and I wanted to capture the castle at night when it is not often seen by the general public. In post-processing I stacked the images to create the star trails seen above’ 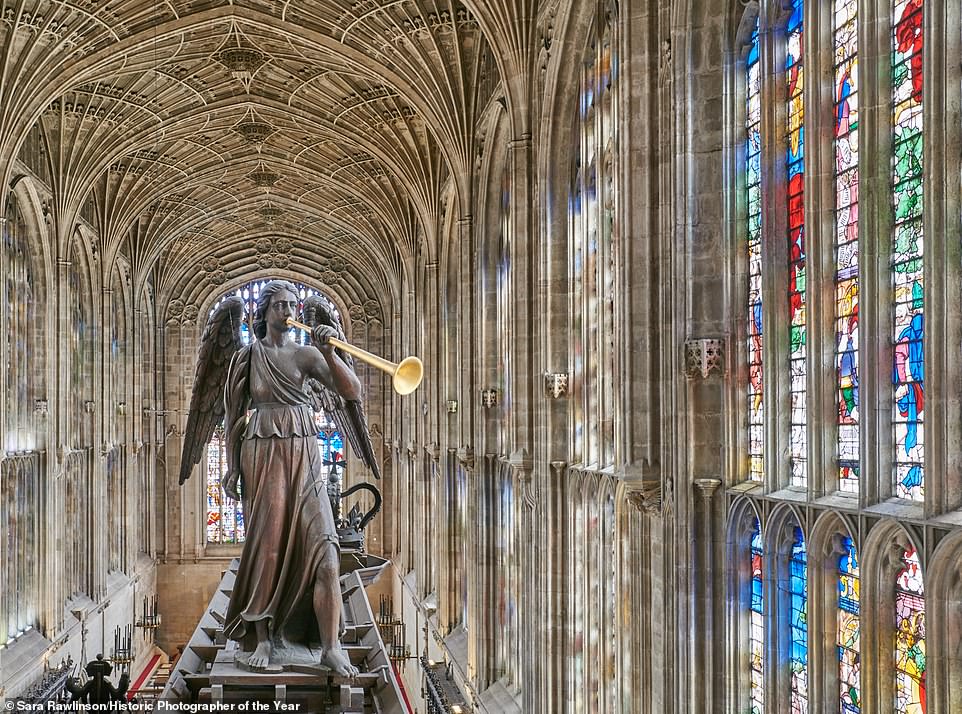 Sara Rawlinson snapped this short-listed image of the angel atop the organ screen in King’s College Chapel, Cambridge, by ascending to a lofty vantage point in a cherry picker 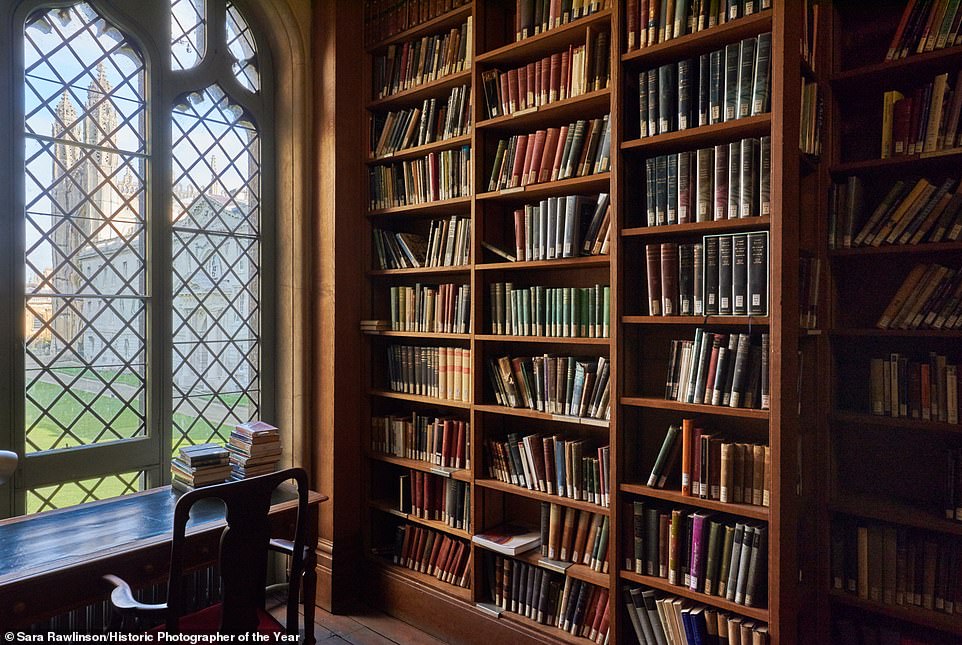 Sara Rawlinson’s picture of the King’s College Library, looking towards the 18th-century Gibbs’ Building and the back of King’s College Chapel, built in 1515, earned her a commendation from the judges 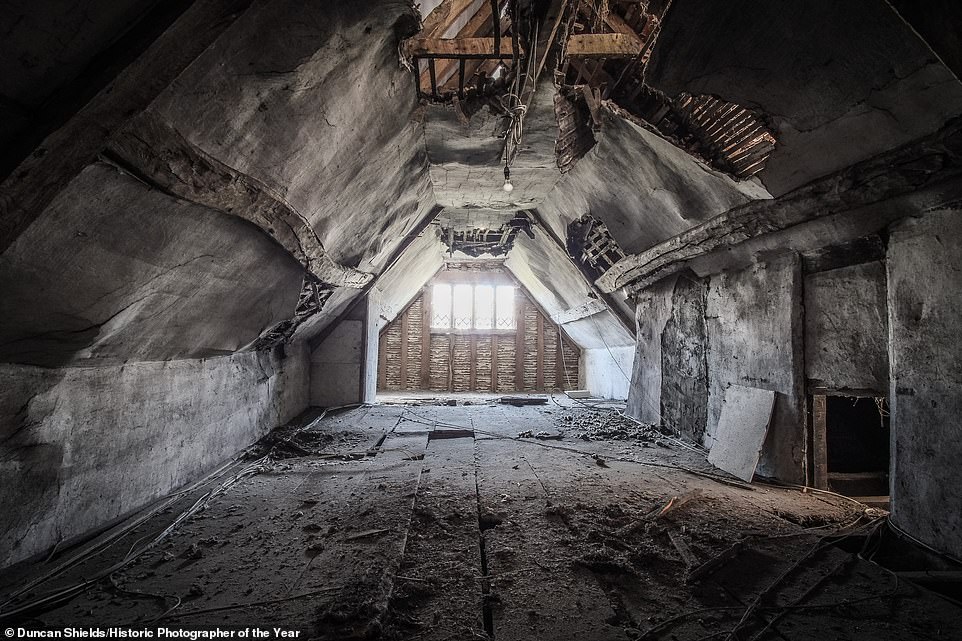 The creepy attic room of 14th-century Headstone Manor in London, captured by Duncan Shields. He says: ‘It was the former London residence of the archbishops of Canterbury and was a former possession of Henry VIII. It has been recently restored from almost total dereliction by a heritage Lottery Fund grant into a thriving museum. Seen here is the attic room of the manor house before restoration, showing just how far from grace the magnificent building had fallen’ 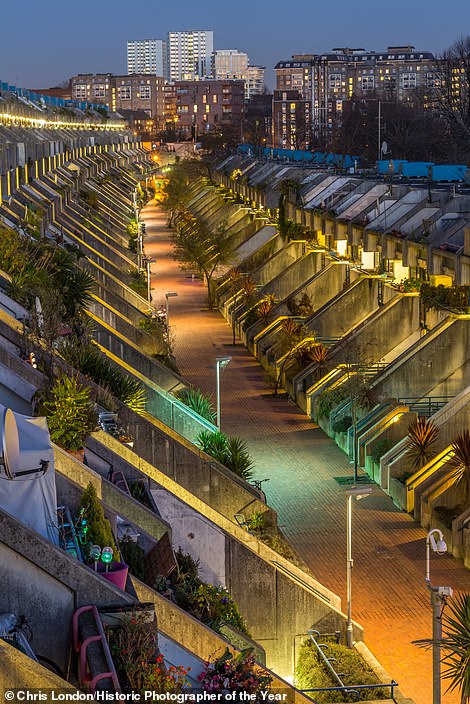 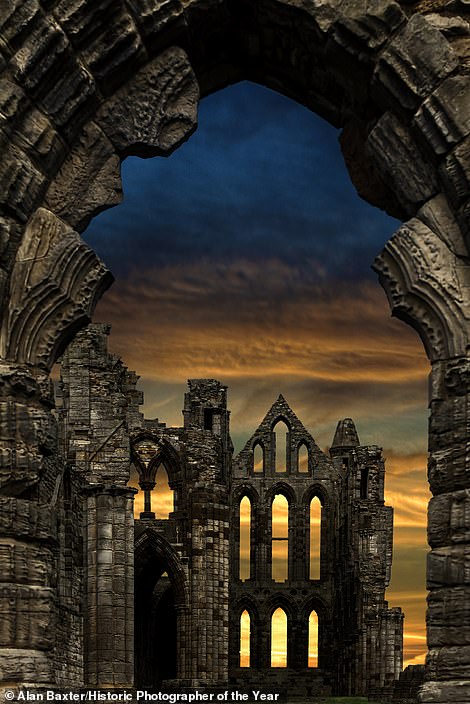 The picture on the left is a short-listed twilight shot of the grade II-listed Alexandra Road Estate in London, also known as the Rowley Way Estate. Photographer Chris London says that it’s a ‘fine example of 70’s brutalist architecture. The picture on the right is of Whitby Abbey, and earned Alan Baxter the honour of being short-listed. He said he took two shots – one exposed for the masonry, the other for the sky. He then merged them in Photoshop 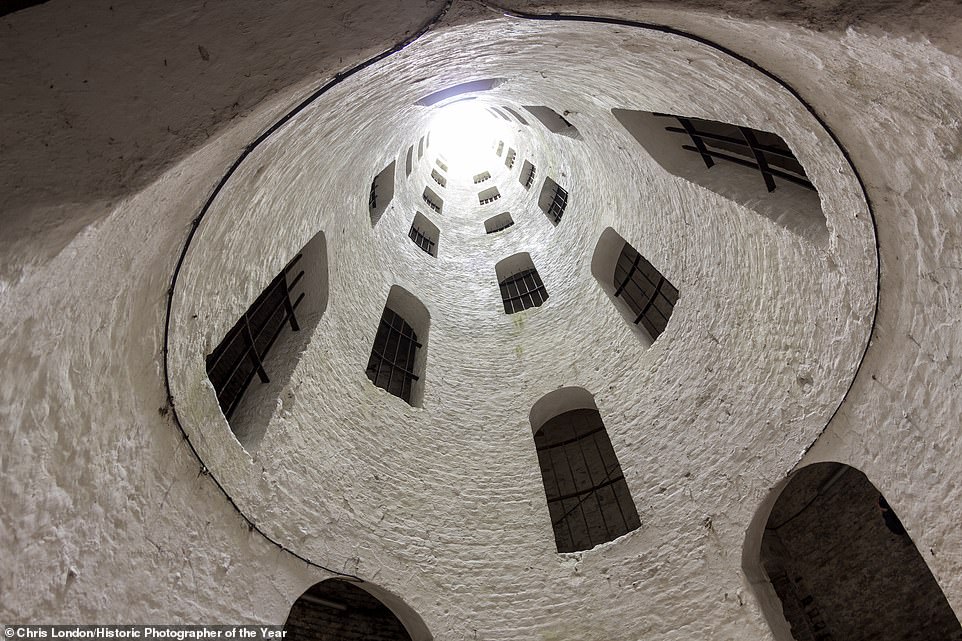 This short-listed image by Chris London is of The Grand Shaft in Dover, built, as Mr London explains, to assist the movement of troops between the barracks at the top of the cliff and the town and harbour below. It was completed in 1807 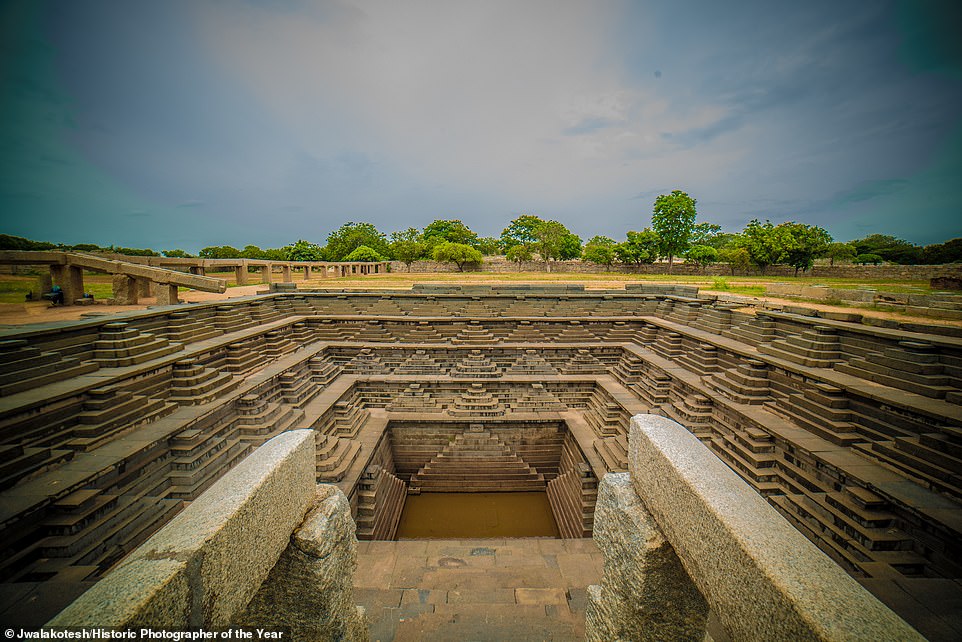 This image of the majestic Queen’s Bath in the Unesco-listed Hampi in Karnataka, India, was rewarded with short-listed status in the competition