An actor is set to be reunited with his long-lost foster carer for the first time in nearly 30 years – after being inspired by a character from a Channel 4 series he appeared in.

Vauxhall Jermaine, from Nottingham, hasn’t seen Terri Sleightholme, whom he lived with for a year in the Bobbers Mill area of the city, since the 1980s.

But now, after reaching out on Twitter and being put in touch with her, The Virtues actor will travel to Yorkshire for an emotional reunion.

Speaking to FEMAIL, Vauxhall said triumphantly: ‘I found her! I received an email from her cousin, I spoke to her on the phone for half an hour and I’m going to see her this week.’

Vauxhall Jermaine hasn’t seen Terri Sleightholme, who he with lived in the Bobbers Mill area of Nottingham, since the 1980s. He’s pictured with her (right) and his foster brother Carwyn

The actor, who also appeared in This is England 90, received a swathe of responses to his plea on Twitter last week.

He wrote: ‘Hi internet, this is a longshot BUT I was fostered for around a year in the 80s by a woman called Terri Sleightholme who lived in the old Bobbers Mill area of Nottingham.

‘I remember her taking good care of me and would like to find her and say thank you for her kindness. Help?’

A public relations firm, Noir et Noire PR, offered to go through the hundreds of comments, emails and social media direct messages Vauxhall received and discovered his foster brother had got in touch. 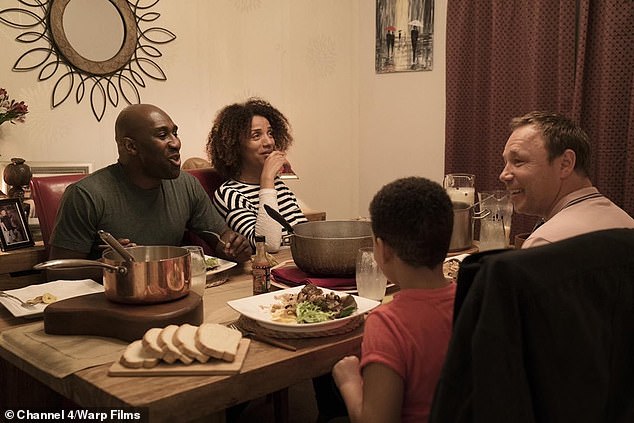 Vauxhall (pictured left in a scene from The Virtues) was inspired by Stephen Graham’s character Joseph (right), who goes home to Ireland to ‘piece together aspects of his life being in care’ 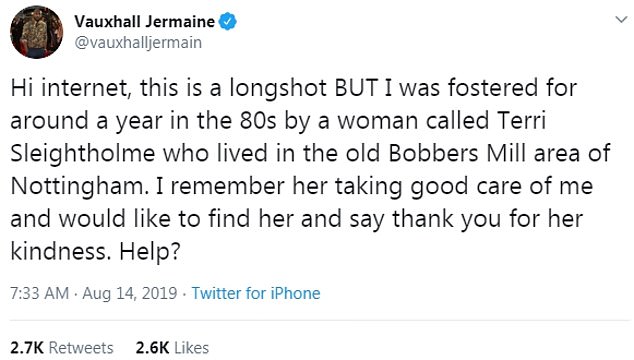 Although he thought it was a ‘longshot’, Vauxhall reached out to his followers for any information about his former carer, called Terry, from the Bobbers Mill area of Nottingham

Amazingly, after starting with just a name and location, Vauxhall now has childhood pictures of him and his foster brother Carwyn with Terry – and even chatted with her on the phone.

‘It was really amazing speaking to her,’ Vauxhall said, adding: ‘She explained how she fought to keep me but the social services moved me on.

‘She lives in North Yorkshire – coincidentally not far from where I went to boarding school!’

Vauxhall, pictured in a scene from Rig 45, received a huge swathe of responses to his plea on Twitter and will travel to Yorkshire to visit his foster mother this week

Following the discovery, Vauxhall wrote on social media: ‘TWITTER THANK YOU SOOOOO MUCH! I’ve just spoken to my foster mother on the phone. I’m going to see her this week!

‘To EVERY single person who emailed, dm’d, tweeted, text, called, sent messages, I am truly humbled. ABSOLUTE LEGENDS ALL OF YOU.’

Since being fostered as a child, Vauxhall has gone on to forge a successful career as an actor and played David in Shane Meadows’ hit Channel 4 drama.

Meadows has spoken out about his own attempts to find the brothers who abused him in woodland when he was just nine-years-old, saying while he was undergoing therapy, he had an urge to ‘track them down’ in adulthood.

‘After reading Shane’s story and seeing how Stephen Graham’s character returns home to Ireland to piece together aspects of his life being in care, it got me thinking about my time in children’s a home in Nottingham as well,’ he explained. 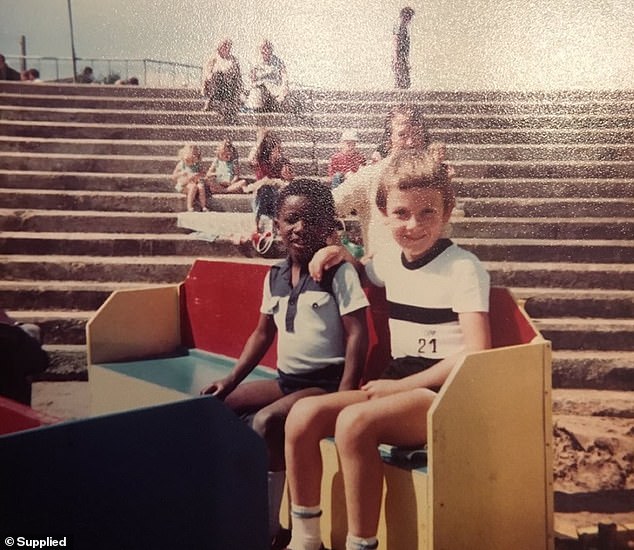 ‘Once the show had aired I thought, I’m going to give it a go and see if I can trace my journey back.’

Vauxhall said that he was also inspired by the story of Mevan Babakar, 29, who last week was reunited with a man who worked in a Dutch refugee camp she lived at in the 1990s.

A man who worked there had given her a bike in a touching act of kindness that she always remembered, and following a Twitter plea, Iraqi-born Mevan was reunited with Egbert 24 years later.

‘Seeing that woman’s story was amazing, and inspired me to see if Twitter and the internet could help me too. The act of kindness the man showed her when she was a child refugee had stayed with her all her life,’ Vauxhall said. 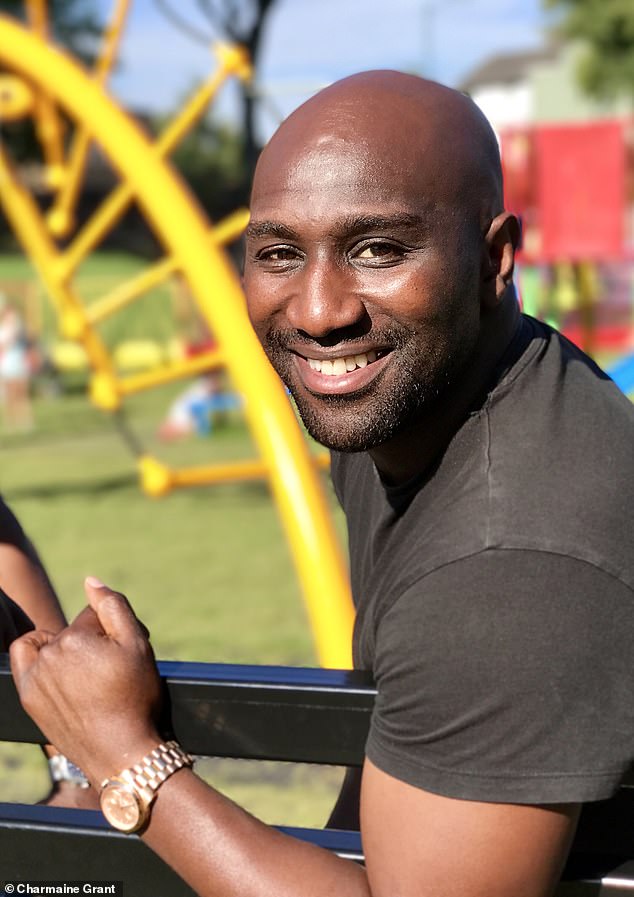 Vauxhall said that he was also inspired by the story of Mevan Babakar, 29, who last week was reunited with a man who worked in a Dutch refugee camp she lived at in the 1990s and gave her a bike

‘It reminded me of how Terry had made me feel when she fostered me. I remembered the area she lived, her name and when I’d think about her as I was growing up I’d get a genuine warm feeling inside – I’m assuming that’s how a genuine mother-son relationship felt,’ he added.

Vauxhall – who has also appeared in the James Corden animation of Peter Rabbit and TV mini-series This is England ’90 – said he contacted social services in Nottingham but they had no record of Terry.

‘I got hold of my file from the social services about nine years ago, took myself to a nice African-Caribbean restaurant and had a good read of it – it was like I was reading someone else’s life,’ he said.

‘That’s when I realised I’d had about four or five different foster carers. But I didn’t remember any of them at all. They got small write-ups in my file but then when I read about Terry they’d written nearly half a page about her.’ 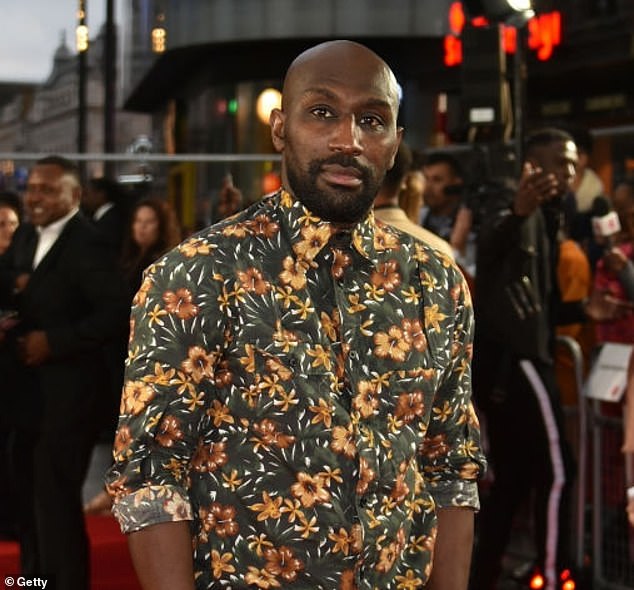 Vauxhall, pictured attending the world premiere of ‘The Intent 2: The Come Up’ at Cineworld Leicester Square last year. He said he always remembers the good care Terry took of him

Vauxhall said that Terry’s file explained ‘how much she cared about me and wanted to help me’.

‘I think it may have mentioned something about her possibly wanting to adopt me as well. After reading it I didn’t experience that warm feeling anymore; maybe it was closure, but in a nice way,’ he said.

He added that the reaction to his tweet had been ‘absolutely insane’.

‘My Twitter has just exploded with really nice people all across the world trying to help me!’ he told FEMAIL.

Vauxhall is also an ex-professional footballer who played for Lewes FC and Braintree FC.