The Voice: Kelly Clarkson shows contestants how to do it with new anthem as field narrows to 13

Kelly Clarkson showed the hopefuls how to do it Tuesday on The Voice before saving her singer Jej Vinson as the field narrowed to the top 13.

New song: Kelly Clarkson belted out her new song Broken & Beautiful on Monday’s episode of The Voice as the field narrowed from the top 24 to the final 13

Kelly swayed while performing the song from the upcoming animated musical comedy UglyDolls, based on the plush toys of the same name.

The three-time Grammy Award winner also was scheduled to perform the anthem on Wednesday at the 2019 Billboard Music Awards in Las Vegas.

Kelly after her triumphant performance was forced to pick only one member from her team to save from elimination.

She faced the tough decision as the field was narrowed Tuesday from the top 24 to the final 13. 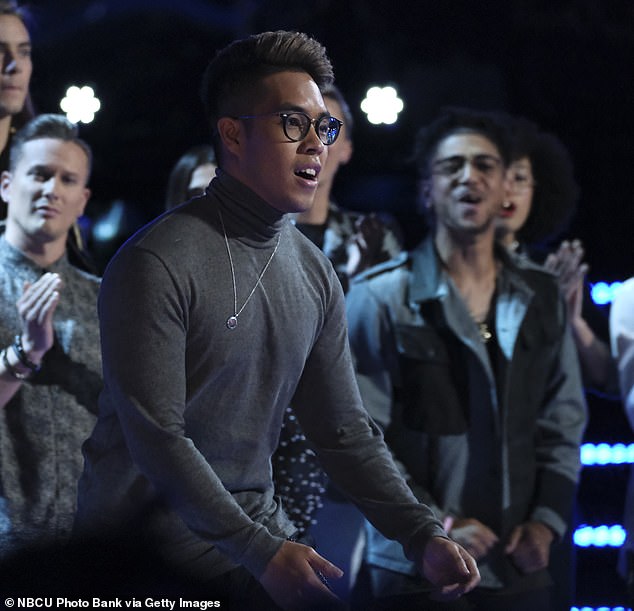 Sole save: Jej Vinson was saved by Kelly after he failed to advance on viewer voting 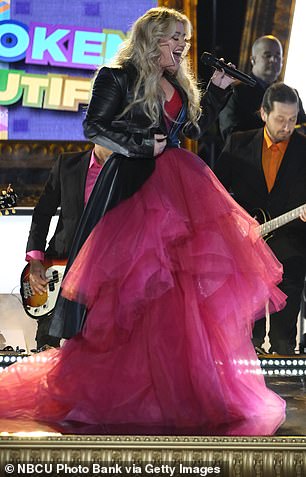 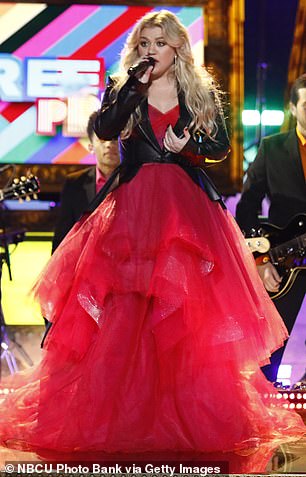 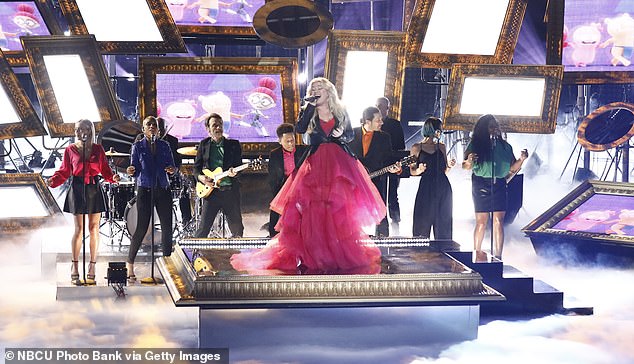 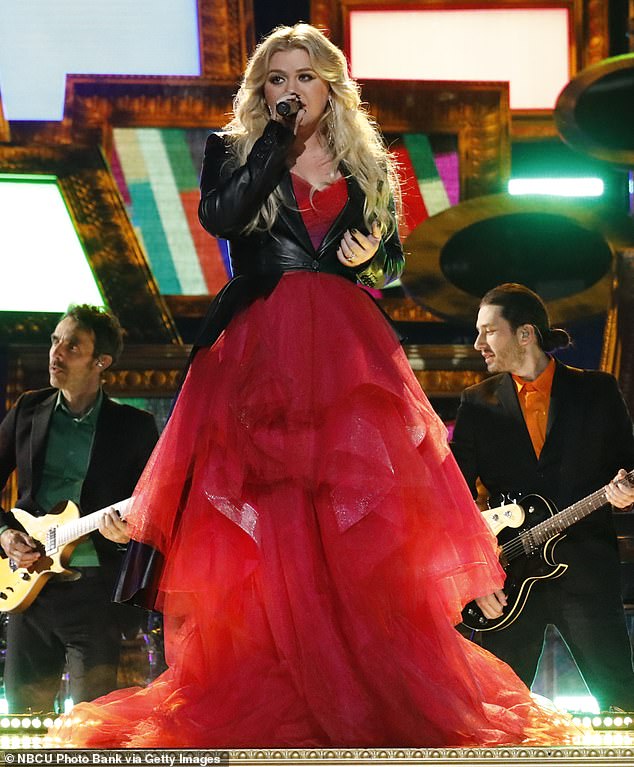 Cool jacket: The Since U Been Gone singer also wore a black Alexander McQueen leather jacket

Kelly went into the round with six singers and viewer voting saved Rod Stokes after his rendition the previous night of Midnight Rider.

‘I’m gonna go with somebody who really blew me away right at the blinds,’ Kelly said before announcing that she decided on Jej. 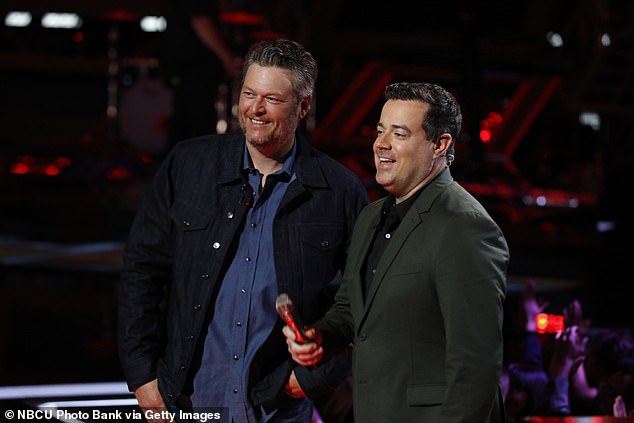 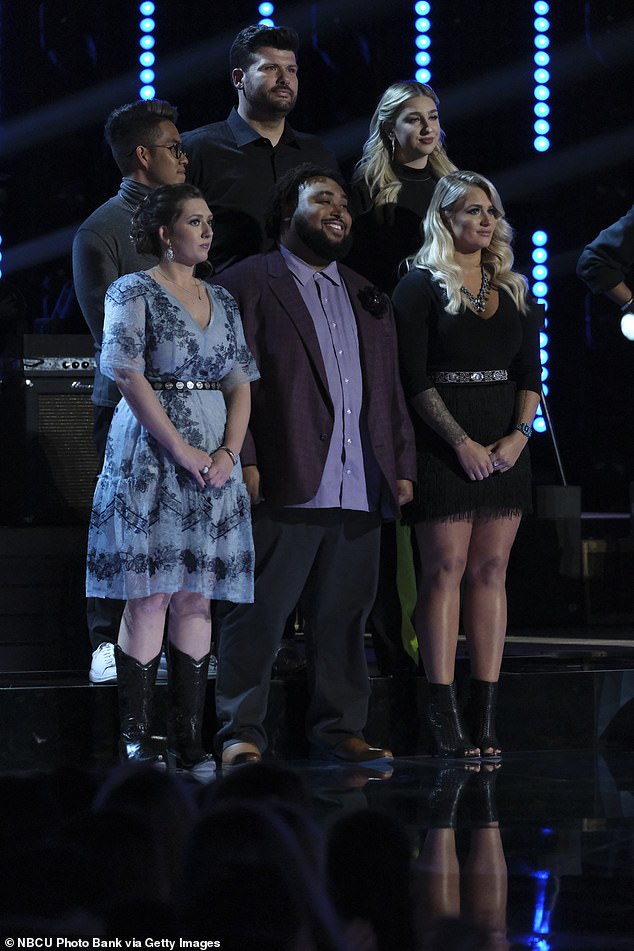 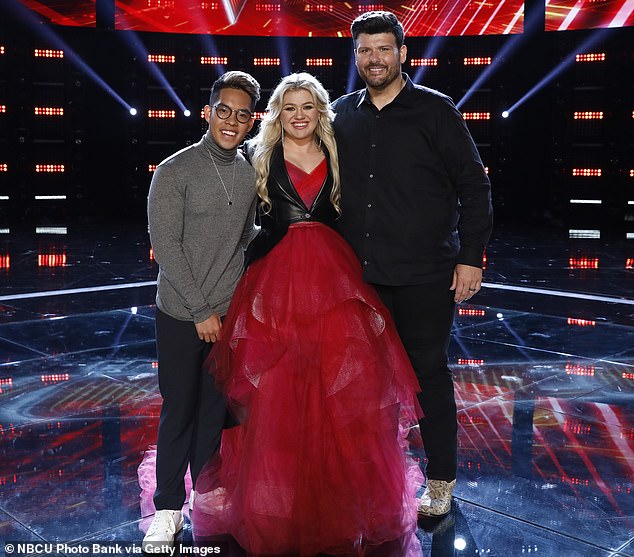 Dynamic duo: Jej and Rod will represent Kelly in the top 13

Blake was the first coach who had to make a save after eight of his singers advanced into the top 24.

The country star had to pick between Selkii, Oliv Blue and Kendra Checketts. 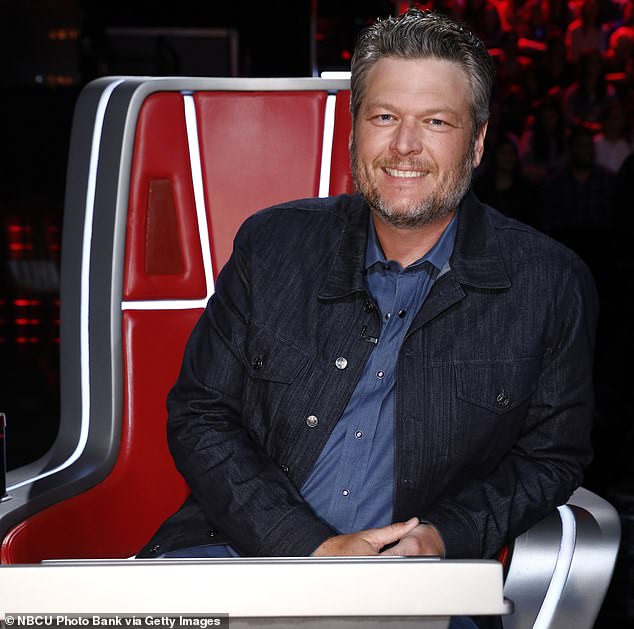 Tough choice: The country star had to pick between Selkii, Oliv Blue and Kendra Checketts 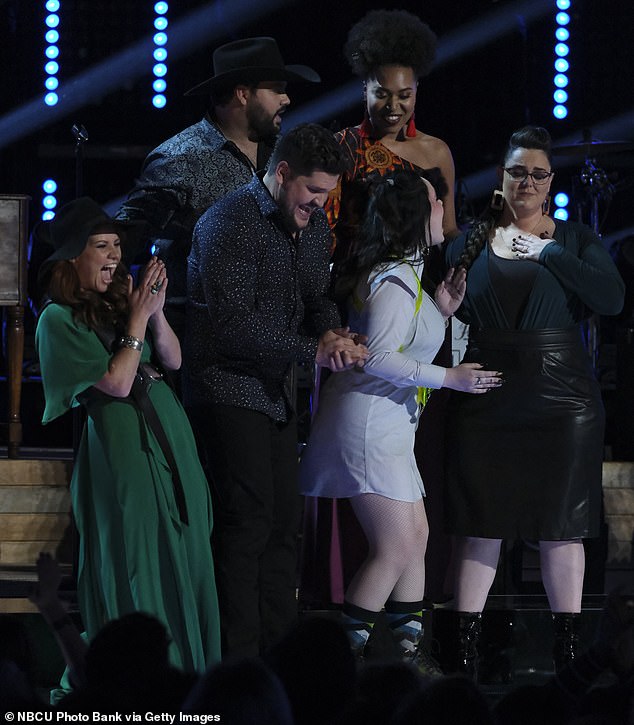 Blake went with Oliv who performed The Girl From Ipanema the previous night.

‘You deserve it,’ Blake told her during a congratulatory hug.

New coach John Legend, 40, celebrated as his singers Maelyn Jarmon and Shawn Sounds were saved by the public’s vote. Next round: The country star went with Oliv who performed The Girl From Ipanema the previous night

‘I thought it was going to be all fun and games,’ John said as he had to decide whether to save Lisa Ramey, Jacob Maxwell, Jimmy Mowery or Celia Babini.

John said that he also believed that Maelyn and Shawn were among the top three performers Tuesday on his team along with Celia as he picked her to remain.

‘You were so good yesterday,’ John said of her performance of the Fleetwood Mac classic The Chain. 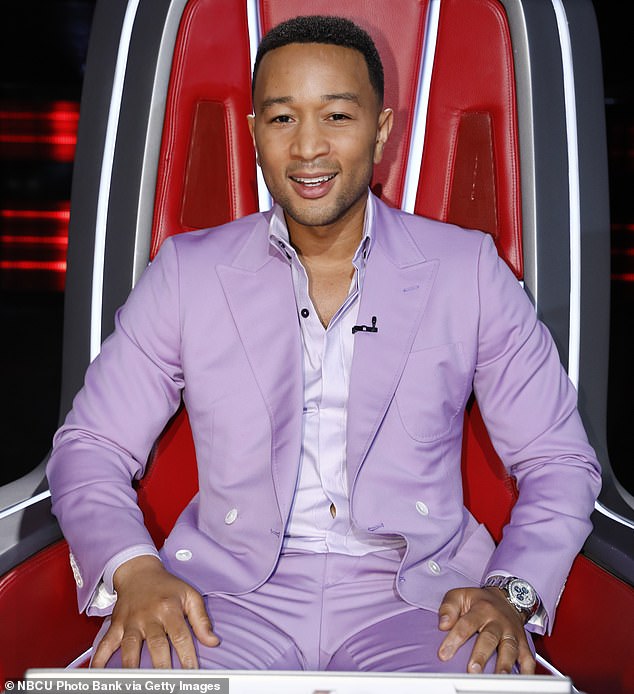 New coach: John Legend admitted that he thought it was going to be ‘all fun and games’ 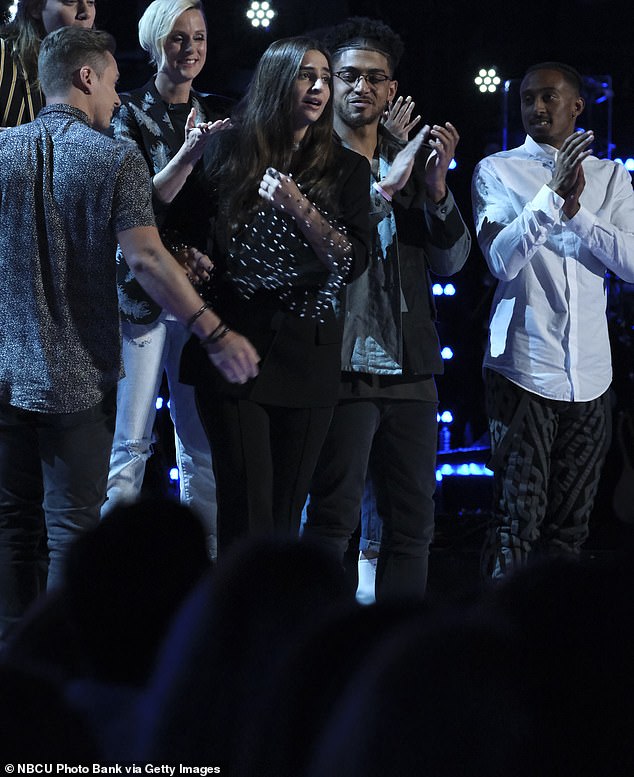 Top three: Celia was considered as one of John’s top three and he picked her to advance 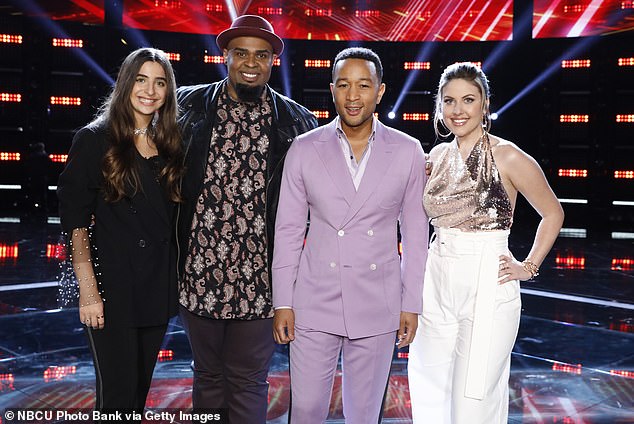 Triple threat: John has Celia, Shawn Sounds and Maelyn Jarmon in the top 13

Adam Levine, 40, went into the results episode with only four singers and they all finished in the bottom of viewer voting.

The Maroon 5 frontman said he was ‘shocked’ by the results and said he had to go with his ‘best foot forward’ as he picked Mari.

Bebe Rexha, 29, who has been the fifth coach on the digital Comeback Stage brought back Kanard Thomas and LB Crew to battle for the 13th spot. 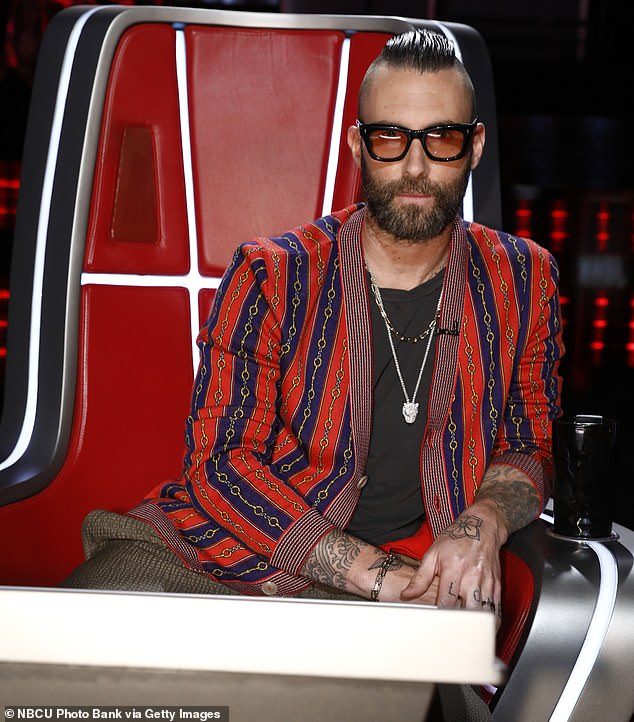 Rock star: Adam Levine went into the results episode with only four singers and they all finished in the bottom of viewer voting 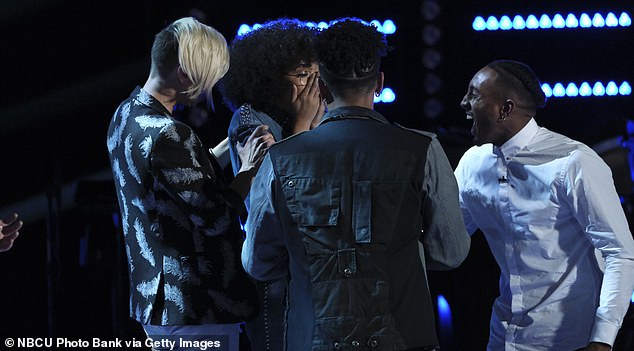 Best foot: Mari was picked by Adam to move into the next around 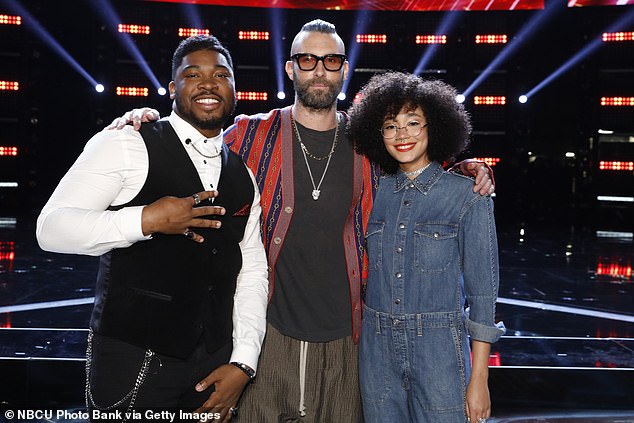 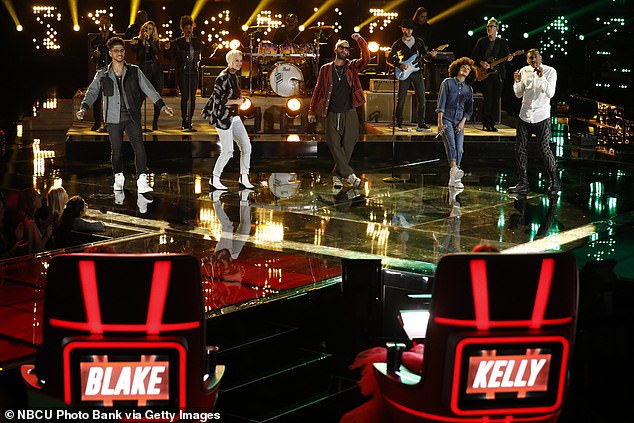 Team song: Adam joined his squad including Kalvin Jarvis, Betsy Ade, Mari and Domenic Haynes for a rendition of the Bob Marley And The Wailers song Is This Love

Kanard, who failed to get any chairs to turn during auditions, performed Call Out My Name by The Weeknd while LB took on Electric Feel by MGMT.

Viewer voting was tallied on Twitter and LB, who earlier had been eliminated representing Adam in the Cross Battles, was named the winner of the live battle.

LB said that he would love to work with John, but said his former team was ‘struggling’ and returned to Adam’s team.

The Voice will return next week on NBC with fan week as viewers choose songs for the top 13 to perform. 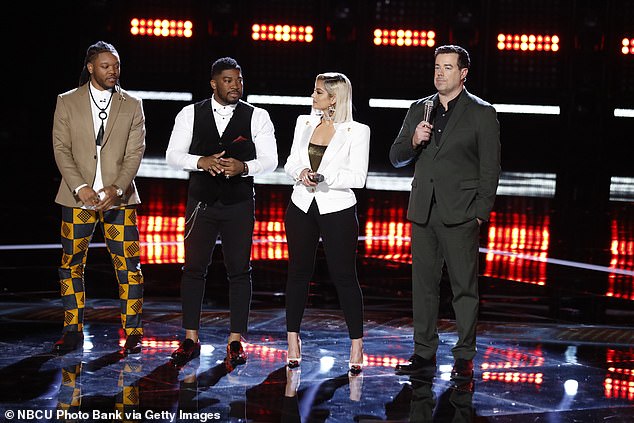 Comeback stage: Kanard Thomas and LB were brought back by fifth coach via the Comeback Stage 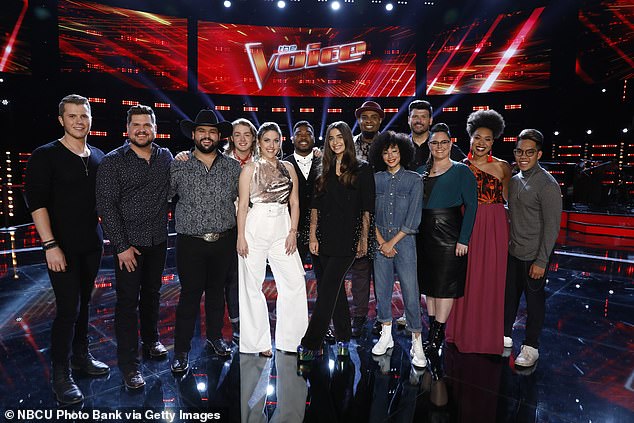