The Volvo XC40 is safe, fun and you could do a lot worse for the money

Happy birthday to me, la la la la, la la…’ OK, that’s enough of that. Although I do want to talk presents. Lynn Bowles, radio’s finest-ever traffic and travel reporter, left Radio 2 this week after 127 years’ loyal service (OK, 18 years). Among her many admirable qualities is a passion for anything Land Rover. So imagine what thought sprung to mind when I received the following missive: ‘One of the Series II pick-ups they used in the Peter Rabbit film is coming to auction next week…’

I cannot tell you how excited this email made me. I love the film, Lynn’s favourite Land Rover is a Series II pick-up, I haven’t been to an auction for ages and there was enough in the kitty to fund at least a couple of decent bids. ‘This could be the greatest leaving present of all time,’ declared the frothy coffee man. And it could have been – with the emphasis on ‘could’. Because numpty here got the date of the auction wrong. I was late by a week. Fortunately, the auction house in question put us on to the successful bidder, who was willing to take a quick profit. Lynn loved it, almost as much as we all love Lynn. There were tears. Success! 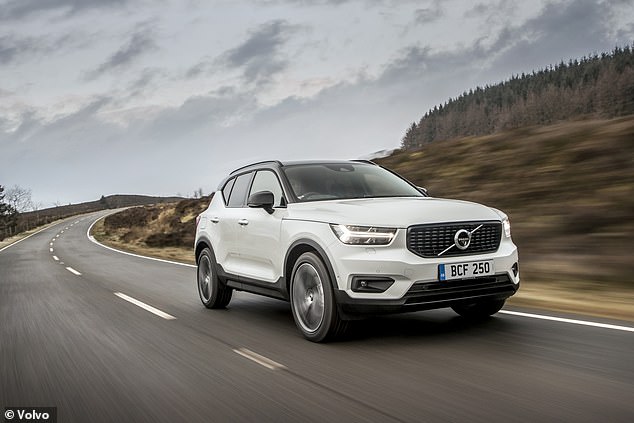 There is an extra fresh vibe to this car. It doesn’t remind me of anything I’ve seen before

Now here’s a car I wasn’t late for. A gorgeous car at that. So classy, so sporty, so stylish, so gimmick-free, stunning in the Crystal White our test car came in, equally stunning in every other colour in the brochure. There is an extra fresh vibe to this car. It doesn’t remind me of anything I’ve seen before, except for the two-tone colour scheme, which seems to be all the rage at the moment. The corresponding scoops on the tops of the front and rear wings are emblematic of a beautifully balanced, contemporary design. Other highlights include the lower door panels and those iconic Volvo rear light clusters.

Volvos have always been famous/infamous for two things: safety and commodiousness. The XC40 is no exception to the former, but as for its cargo capacity, it’s actually a tad disappointing. That’s with the rear seats up. Get them to lie down at the flick of a switch, and you could easily declare yourself Crystal White Van Man/Woman. The boot is wide enough, just maybe not as deep as the exterior suggests.

Storage room for humans is a different story. For now we can also declare the XC40 not only the best-looking compact SUV in its class but also the roomiest for rear-seat passengers. What we have here is an (almost) genuine rear three-seater, the centre seat proffering virtually the same space and comfort as the seats either side. Equipment-wise, alas, there is little to shout about, apart from the centre armrest, with its brace of cup-holders and snazzy air vents.

The front compartment, on the other hand, is completely fab and groovy. It’s strange how some black interiors are so oppressive they make you want to hand back the keys immediately; others, like this, come across as anything but. I’m not sure how comfy the two front seats would be to the South of France and back, but for my daily commute into London they were glorious. Plenty more storage up front too, with a deep cubby hole underneath the armrest, along with niceties such as cordless phone charging, a huge, responsive touch screen and an extra sporty steering wheel with stealth gear-shift paddles hidden behind. But my new favourite feature for a while in any car is the insane parking camera. What I’m about to describe must work, otherwise Volvo wouldn’t do it, but it takes a bit of getting used to. When you go to park, you get a bird’s-eye view of the car, with the XC40 appearing minuscule on screen and all the other cars about ten times the size. This was hilarious, and remained hilarious. It was a huge hit with the kids, too.

On start-up, the 2.0-litre petrol engine is a wee bit noisy externally but hardly audible inside the cab. The first quirk thereafter is what may be the smallest gearstick out there. It’s a tiny little thing, which requires a double click either way for anything to happen. Probably another Volvo safety elf and completely fine once you get used to it. I actually quite liked the double-check subliminal message it was sending me: buy a Volvo, become a safer person all round. Like it. 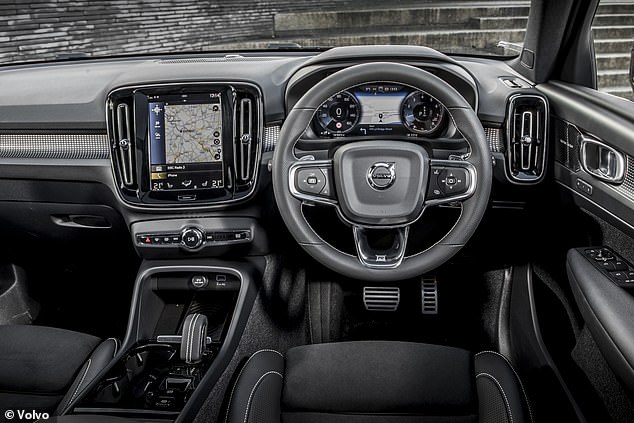 I’m not sure how comfy the two front seats would be to the South of France and back, but for my daily commute into London they were glorious

On the road, there’s a more than handy 247hp, not to mention an entirely unexpected 0 to 60mph time of just 6.5 seconds in the offing. I say, Volvo, where d’ya pull that white rabbit from? Such a surprising amount of power justifies four driving modes, including a rather feisty Dynamic that I sensed surprised the car almost as much as it did me. We both found ourselves being gleefully catapulted somewhere into the middle of next week. Such high jinks come at a price, of course, and in the case of the XC40, 40mpg may just about be achievable on very good traffic day, but definitely not in Dynamic mode.

That niggle aside, it is a genuinely lively driving experience. The brakes are smooth and the steering is light to the touch. It handles impeccably, with hardly any discernible body roll. Cruising in eighth gear makes motorways a breeze and everyone enjoys the comparatively lofty view. It’s safe as houses, of course. And the oncoming traffic safety warnings are excellent. You have to be an awful driver these days to be the cause of an accident in a new Volvo.

If I was in the market for a car like this, I would find it very hard to pass by the XC40. At £40,000 for this top-spec model, it’s by no means inexpensive, but you could do a lot worse and spend a lot more.

PS. I’ve already had the best birthday present I could have wished for – the fact that my mum is still around to celebrate today with us. Christmas just gone, Mother’s Day, the kids’ and grandson’s birthdays, we’ll take them all. Hang on in there, Minnie. We all love you so much. X