The season premiere of the 11th and final season of The Walking Dead ended Sunday with a literal cliffhanger.

Maggie Rhee [Lauren Cohan] was pulled off a train into a pit of angry zombies as Negan Smith [Jeffrey Dean Morgan] watched, ignored her screams and turned away from helping her.

The episode titled ‘Acheron: Part 1’ started with Daryl Dixon [Norman Reedus] and his crew armed with bows and arrows as they scoured Fort Collins, a military base in Virginia, for food.

Final season: The season premiere of the 11th and final season of The Walking Dead ended Sunday with a literal cliffhanger

Maggie, Carol Peletier [Melissa McBride], and Rosita Espinosa [Christian Serratos] got into the base by rappelling in from the ceiling. Once inside, they cut through a bolted door to get to a room where food was stored.

They tiptoed through the base stepping over sleeping soldier zombies until they found and pried open a box filled with army rations labeled Meal, Ready-to-Eat [MRE]. They filled their bags with the MREs and attached them to a wire so Jerry [Cooper Adams] could lift them up to the roof.

Daryl was also on the roof supervising the whole operation when one of the lines snapped and almost smashed down to the floor, potentially awakening the zombies, but he was able to grab it before it fell.

He cut his arm in the process and a drop of his blood fell to the ground and into the eye of a zombie bringing it to life. That zombie’s screams and movements awoke the entire roomful of zombies. 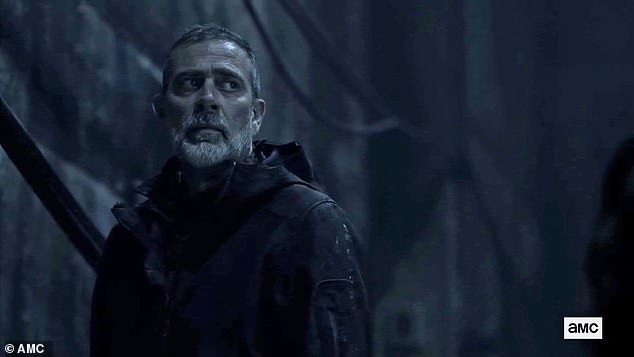 No help: Maggie Rhee [Lauren Cohan] was pulled off a train into a pit of angry zombies as Negan Smith [Jeffrey Dean Morgan] watched and refused to help

Rosita and Elijah [Okea Eme-Akwari] tried to escape but came face to face with a room full of zombies. Fortunately, Daryl, Jerry, and Aaron [Ross Marquand] shot down arrows from the roof, killing the zombies.

Maggie found a soldier’s gun and started shooting zombies, but her gun jammed and she appeared to be out of bullets. 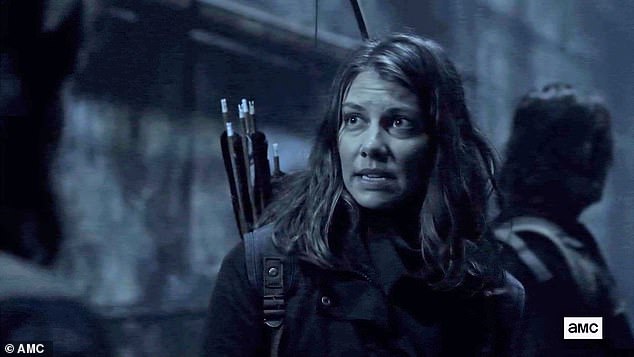 The leader: Maggie was calling the shots during the mission 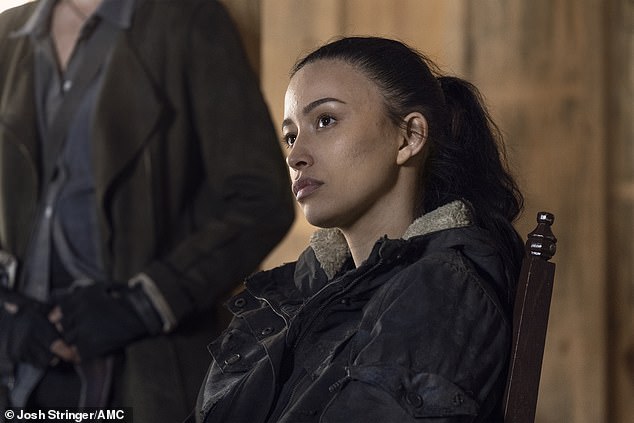 Just then a layer of machine gun fire rang out from her rescuer Carol.

Daryl told the crew to start evacuating and lifted them out of the building to safety.

Carol and Maggie continued to shoot the zombies as other members of their crew made their escape. 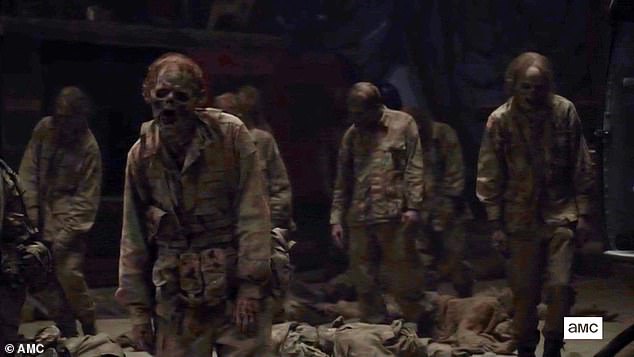 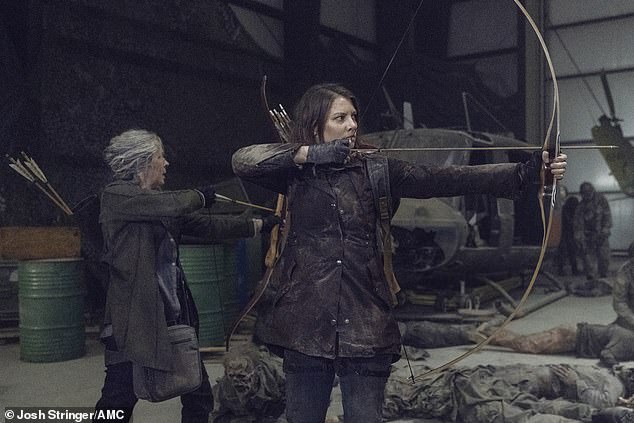 Nice shots: Maggie and Carol Peletier used their bows to take out the zombies 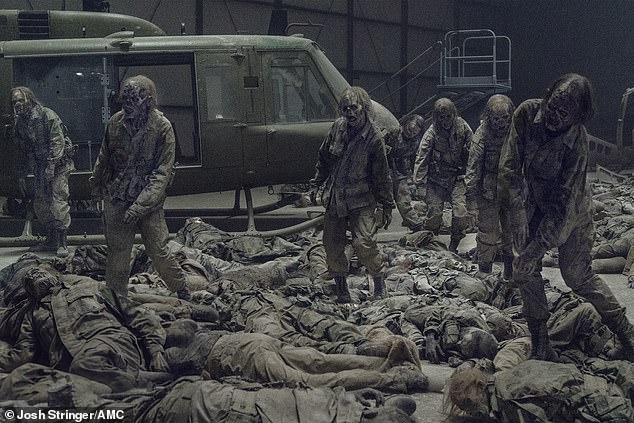 Eventually everyone was lifted to safety except for Carol. With her gun now out of bullets, Carol hooked onto the rappel line to leave but then saw another MRE crate across the room.

She unclipped, ran across the room and filled up her bag when a zombie grabbed her on the shoulder. Daryl threw a knife and killed the zombie.

Carol reclipped her line and was pulled to safety as a group of zombies surrounded her. 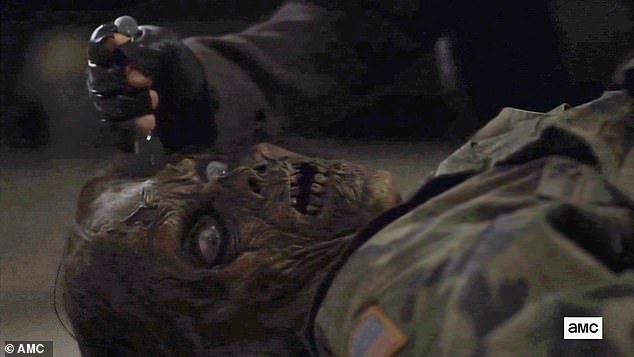 Head shot: A zombie was dispatched with a knife strike to the skull

And that was all before the opening credits of the hit AMC show.

The group returned to Alexandria with their food.

Maggie was not happy when she saw Negan back at camp. She cheered up when she saw a surprise that Agatha [Laurie Fortier], Duncan [Marcus Lewis] and Frost [Glenn Staton] were back. Maggie said it was good to see them because she thought they were all dead. 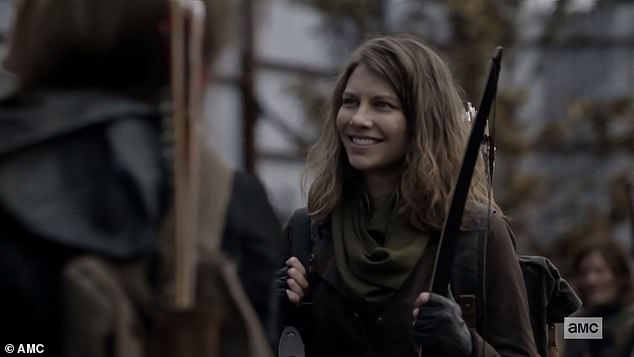 Big smile: Maggie cheered up when she saw a surprise that Agatha [Laurie Fortier], Duncan [Marcus Lewis] and Frost [Glenn Staton] were back

Even with their haul, food was still scarce in Alexandria. Father Gabriel [Gabriel Stokes] told Daryl and the others that they only had enough for one week.

Maggie told them that she knew one more place where there was food. 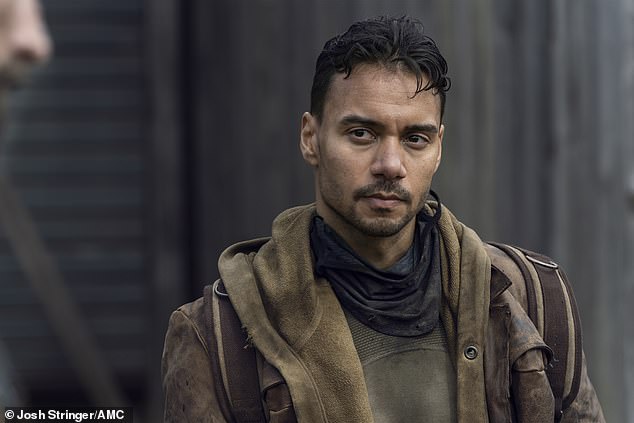 Together again: Frost was reunited with Maggie who thought he was dead

‘The place I lived before this,’ she said. ‘Where we lived. Meridian. It’s got plenty of food, water, crops and animals.’

Maggie told them about a mission she went on with Duncan, Frost and Agatha leading walkers away when she circled back with Elijah and Cole. She said on the way back home that they got stuck out on the road.

She said she didn’t think it was an accident. She said by the time they got back that most of the people had been slaughtered. 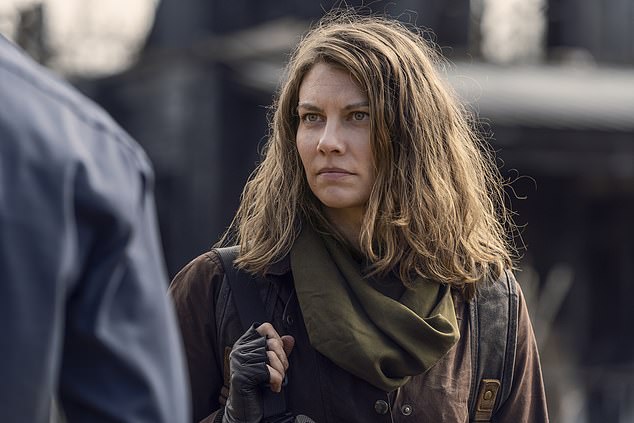 Prime property: ‘The place I lived before this,’ Maggie said. ‘Where we lived. Meridian. It’s got plenty of food, water, crops and animals’

Maggie said she only knew two things about the people that attacked them – ‘they come at night and by the time you see them you are already dead.’

She said these people were at Meridian, but they just needed to take it back.

‘So you are leaving to fight ghosts,’ asked Aaron, who suggested they shore up the walls of Alexandra before the walkers get in. 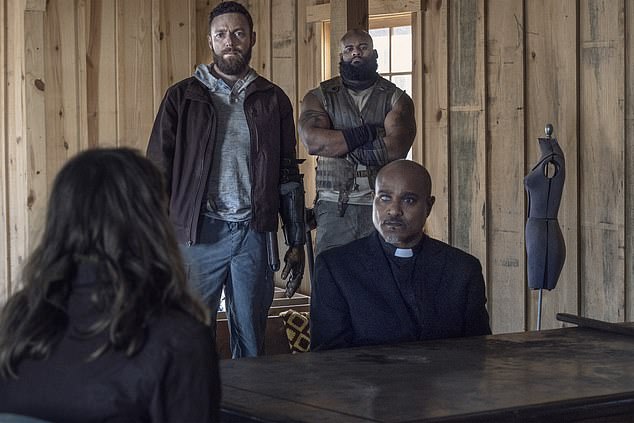 Dissenting opinion: ‘So you are leaving to fight ghosts,’ asked Aaron, who suggested they shore up the walls of Alexandra before the walkers get in

Daryl , Duncan, Frost, Agatha and Father Gabriel and a group of fighters agreed to go with Maggie to Meridian. They walked in the dark until the rain came down and they decided to take shelter in an abandoned D.C. Metro subway station.

Negan, who came with them, told them he thought they should hunker down and wait for the storm to pass.

‘You don’t want to go in there,’ Maggie said to Negan of the subway tunnel. 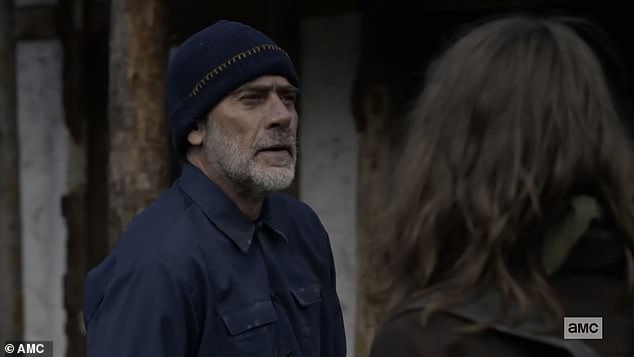 Sage advice: ‘You don’t want to go in there,’ Negan said to Maggie of the subway tunnel.

He said he would give them directions instead and told them to take the yellow line north and then switch to the blue line at the Reagan Airport stop.

Negan tried to talk to Daryl before they went in the tunnel but he told them they weren’t buddies. 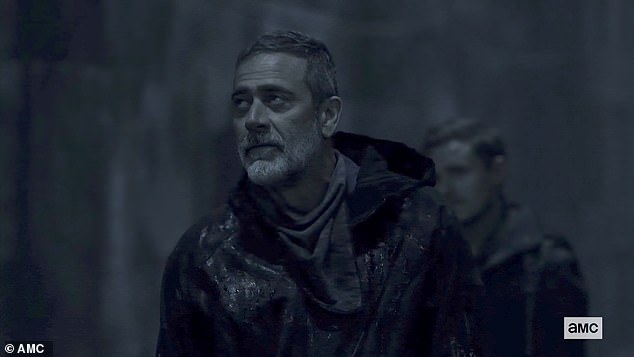 Nice try: Negan tried to talk to Daryl before they went in the tunnel but he told them they weren’t buddies

They walked along the deserted tracks until they heard a strange loud noise.

Negan told them the noise was God telling them to turn around.

‘I’m pretty sure he would have run that past me first,’ Father Gabriel said. 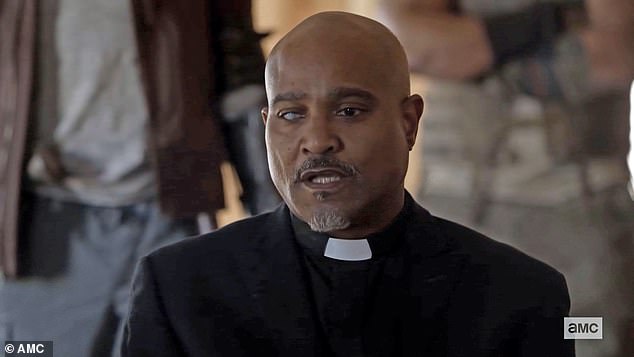 Good one: ‘I’m pretty sure he would have run that past me first,’ Father Gabriel said when Negan said God was trying to tell them to turn around

Negan tried to tell them that the tunnel would flood but Daryl told him to keep quiet and reminded him that he wasn’t running things. 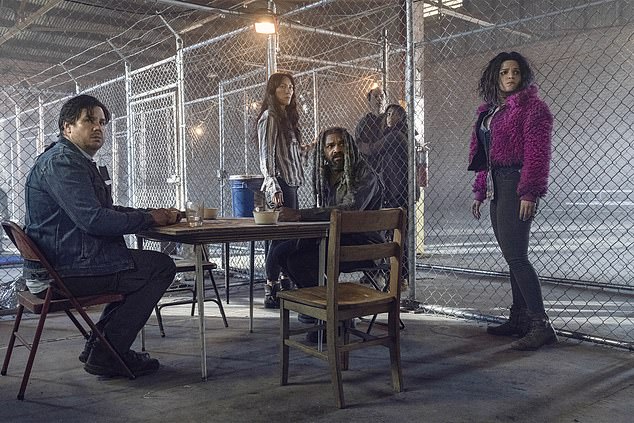 They were all made to participate in ‘audit’ interrogations by the Commonwealth’s paramilitary police.

Interrogators asked them repeatedly mundane questions such as where they had lived, their zip code, previous jobs, level of schooling and the location of their settlement. 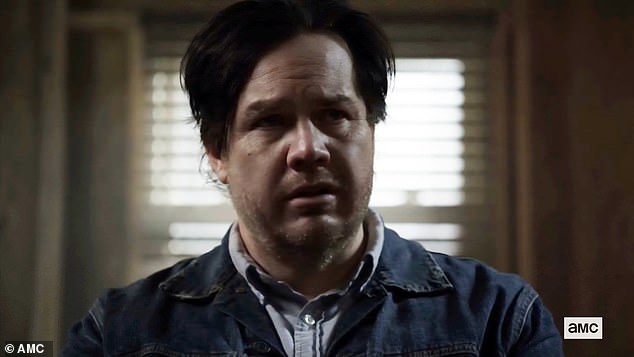 Audit sessions: They were all made to participate in ‘audit’ interrogations by the Commonwealth’s paramilitary police

During the audit Ezekiel asked Mercer if he was in charge and he said he was.

Ezekiel told him they had been asking the same questions for seven hours straight and that they have been cooperating. Mercer gave him a glass of water when Ezekiel started coughing. After questioning Eugene, Princess, Ezekiel, and Yumiko returned to their cage cell where they ate food that had been given to them and wondered what would happen next.

Princess told them they needed to get out. Princess asked the couple in the cage next to them how long they had been here for and they told them nine months. Soldiers then went and dragged the couple away for reprocessing. 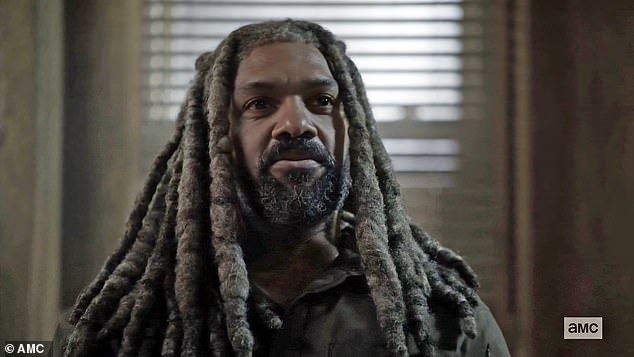 Same questions: Ezekiel told him they had been asking the same questions for seven hours straight and that they have been cooperating

Maggie instructed them to kill all the zombies. Negan killed a giant zombie that tried to bite him. Maggie told Negan to pay attention.

Negan continued to implore everyone to turn back. He accused Maggie of ‘playing dictator.’ He told them that whoever killed all these bodies ‘could still be down here. Has that crossed anyone’s minds?’ 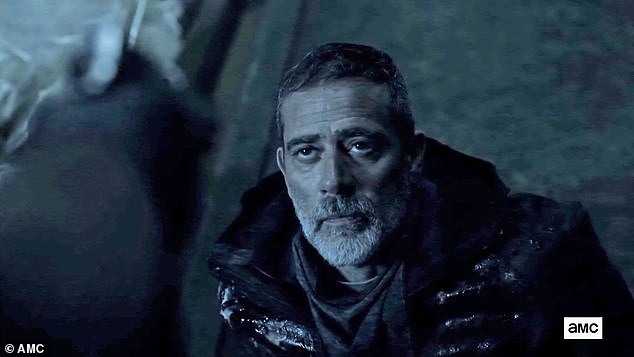 Bad idea: Negan continued to implore everyone to turn back

‘This is a death march,’ Negan said.

He told them he was leaving and several of the others said they would turn back with him. Maggie told them they couldn’t let Negan couldn’t leave because he knew the city. 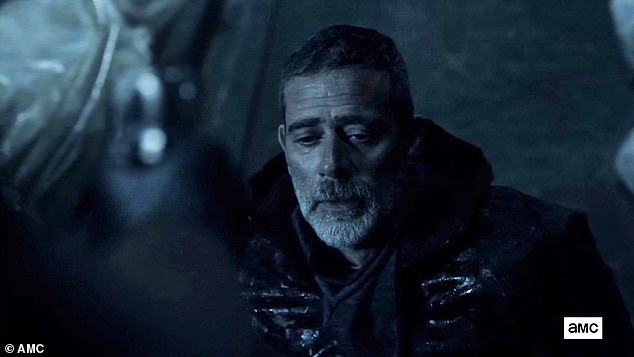 Death march: ‘This is a death march,’ Negan said

Negan accused Maggie of bringing him on this mission so that he would die and referenced her late husband Glenn who he killed.

Daryl punched Negan, knocking him down.

Maggie told Negan they were down in the tunnel because ‘our kids are starving’ and she turned her gun on him and told him that killing him was always on her mind. 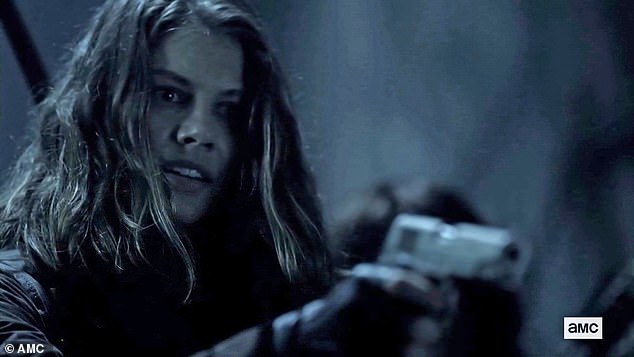 Back at Commonwealth, Princess hatched an escape plan. She told the others that two of the guards were flirting and would disappear for an hour together.

She then realized they would take off their body armor during their trysts. Somehow, they were able to get the guards body armor on Eugene and Yumiko, who pretended to be guards, and led Princess and Ezekiel out of the building.

Outside, they came upon a bulletin board filled with photos of ‘lost’ individuals. Yumiko saw her photo and note from her brother looking for her and told the others she had to stay. 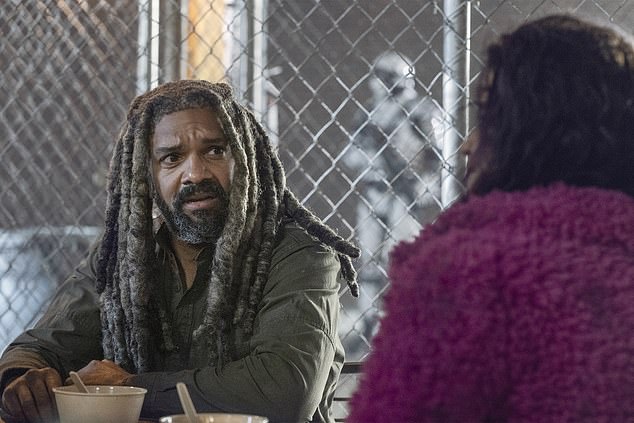 Escape plan: Back at Commonwealth, Princess hatched an escape plan with Ezekiel

In the tunnel, the group continued killing the zombies. Then they looked behind them and the tunnel behind them was packed with wall to wall zombies.

The tunnel in front of them was blocked by an old metro car and rocks. The hordes of zombies surrounded them. Daryl told everyone to climb on top of the train car.

Dog bolted and Daryl went after him under the train. Maggie was the last one to climb onto the train, but before she could a zombie grabbed her leg. Other zombies grabbed on her too as Maggie tried to fend them off. 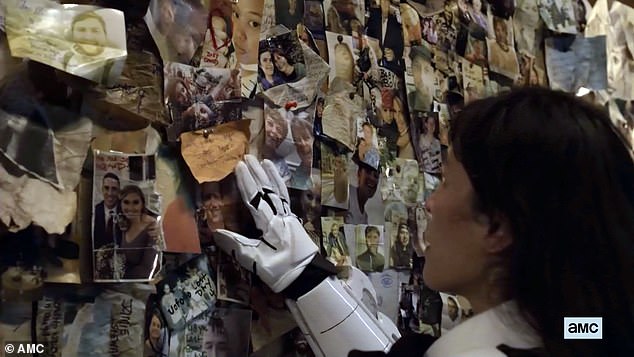 Staying behind: Yumiko saw her photo and note from her brother looking for her and told the others she had to stay

Negan watched this from the top of the car, did nothing, and then walked away as Maggie screamed after him to help.

The cliffhanger episode ended with Maggie being pulled off the train.

The Walking Dead will return next Sunday on AMC. 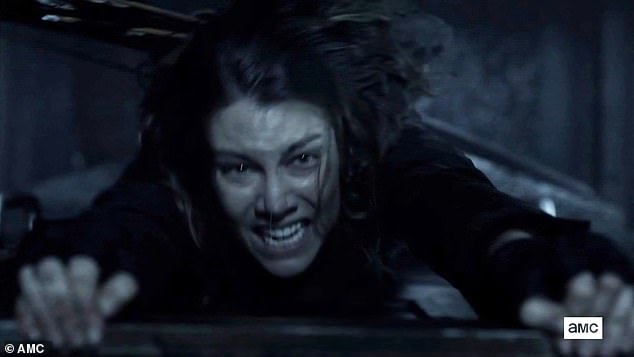 Pulled off: The cliffhanger episode ended with Maggie being pulled off the train by zombies