Can I put these up on my Instagram?’ asks Paolo Odogwu, as he poses for photographs in the hip, graffiti-tagged backstreets of Birmingham.

His audience is growing quickly. After Wasps’ victory over Bath last week, he gained 1,000 followers in a single evening.

So who is Paolo Odogwu? The Premiership’s rising star who was born in Coventry, idolised former Nigerian footballer Jay-Jay Okocha and eats pasta on Christmas Day. 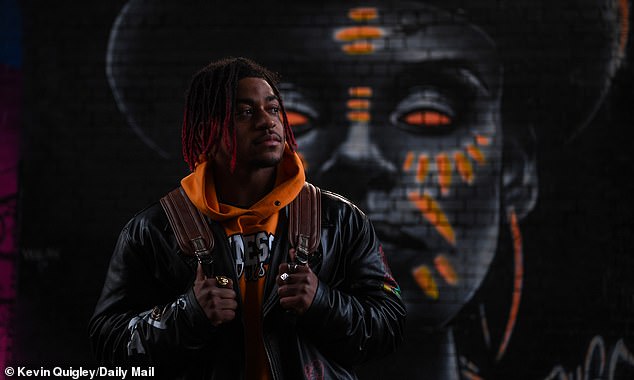 ‘A bit of a cultural mash-up,’ chuckles the English, Nigerian and Italian hot-stepper.

Odogwu’s nationality is of particular interest because, over the coming days, he will be asked to make a decision about which country he wants to represent in the Six Nations.

‘I was born here, my dad’s half-Nigerian, half-Italian and my mum’s fully Nigerian,’ he says. ‘I like watching Nigerian football. I love the whole vibe. Until I went to secondary school, it was all football. No one in my family knew anything about rugby. The first rugby game they watched was me playing at school… as a prop!

‘One of my idols was Jay-Jay Okocha. He had so much skill and flair and I just thought “I want to be like him”. I like the idea of having your own individual style and that’s what I try to bring in myself. I don’t want to play like anyone else… I just want me to be me.’

Odogwu, 23, has stamped his identity all over the Premiership. Before moving on to his impressive rugby credentials, he talks through his life away from the rugby pitch: school days, African music and his parents’ upbringing.

‘My parents had a pretty good background in Nigeria,’ he says. ‘My dad’s dad is a doctor and my mum’s dad was a corporate lawyer. There’s a massive wealth gap there, so you have some people with private gates and armed security, then others five minutes down the road living on the streets. Fortunately, my parents grew up well-educated and they’ve instilled that in me. 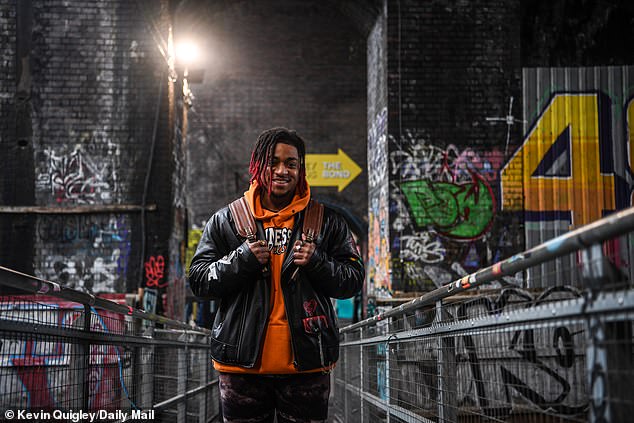 ‘Growing up, we went to Italy more than Nigeria. It’s easier to get to, obviously. We used to go to Bologna every year to see my dad’s family. We eat a lot of Italian food. We have a massive seven-layer lasagne for the first course on Christmas Day!’

Odogwu is heavily invested in his roots. Last year he took part in the Black Lives Matter marches and is a vocal campaigner on social media. He takes pride in his appearance. On the pitch, he stands out with red-flash dreadlocks and personalised boots, featuring designs such as BLM and the NHS. For his photoshoot on fashionable Gibb Street, he wears a customised leather jacket and tie-dye effect trousers.

‘When all of the stuff with George Floyd happened, I decided to share my own story,’ says Odogwu, who has had his own experiences of racial prejudice. ‘I like to dress a bit out there. It’s my own style. I’m confident in myself, so I like to express that in my clothes, my boots, my hair.

‘I customise all of those things with hand-painted superhero designs, wrestlers or whoever. When I was younger I used a little Sharpie pen but now I use actual paint. You don’t get any chances to reflect your personality in rugby, so I like to do it through my boots.’

It is not just his fashion and political statements that have been attracting the attention of international coaches. As an attacking force, Odogwu has made more metres and clean breaks than anyone else in the league this season.

His career stalled when he was released by Leicester and given limited opportunities by Sale, before Wasps signed him up in 2019, recently shifting his position from wing to centre. 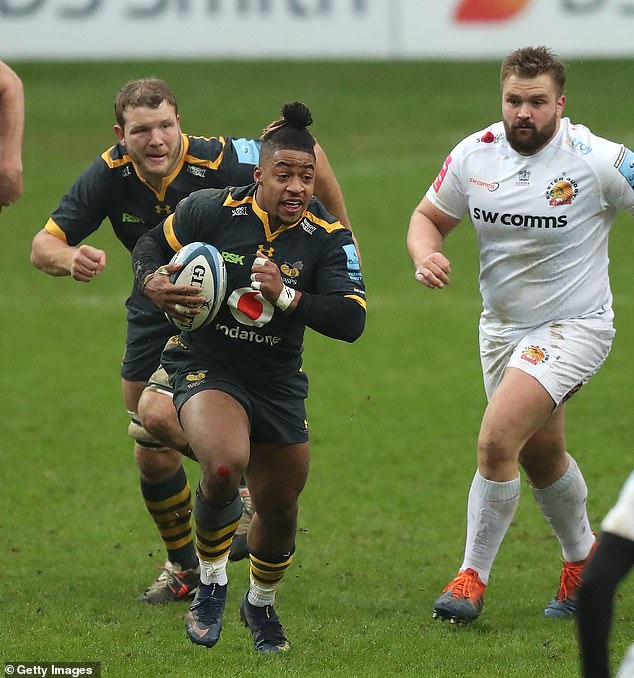 ‘I’ve played every game this season and shown what I can do, so it does feel a bit like a breakthrough year’, he says. ‘Leicester released me a few years ago and I roamed around for a couple of months, but I always backed myself to play in the Premiership.

‘At Leicester, it was a lot more of a traditional forwards-based club. Then Sale picked me up and they were somewhere in the middle. Coming to Wasps, they’ve always had game-breaking wingers who make breaks and score tries. It’s instilled at the club.

‘For me, I loved watching Paul Sackey, Christian Wade, Marland Yarde, Joe Rokocoko. All those guys were sick freak athletes, but they also had their own individuality and a bit of swagger. Jason Robinson was another one. They just owned it.’

And what about his own style? ‘It’s a bit like a hybrid NFL running back,’ says Odogwu.

‘Power, speed, footwork mixed together. Hopefully that makes me hard to defend against. Taking on defenders, causing problems in defensive lines. Whether that’s carrying tight in sticky spaces to get a couple of yards or making a line break, I’ve got the build to do both. 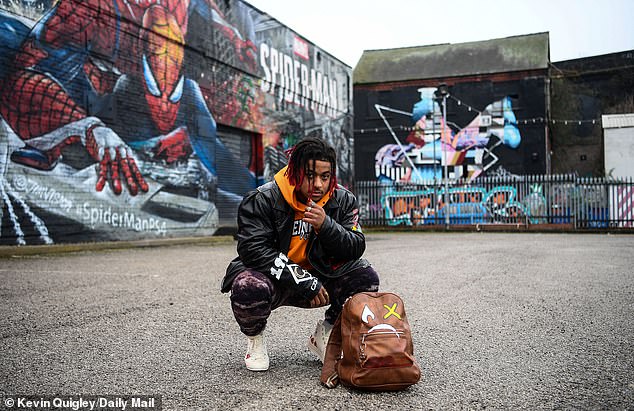 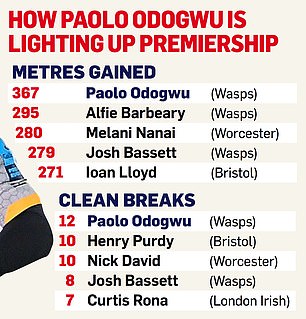 ‘Playing at centre has allowed me to get more touches. I was always going to get chances on the ball, it’s just about whether you take them.

‘I love the NFL. I’m a big Kansas City Chiefs fan. Kyler Murray is one of my favourites. He’s pretty much my height and build but he’s a starting quarterback in the NFL.’

Odogwu is growing with every performance. He has watched his age-group team-mates, such as Ben Earl, Tom Curry and George Furbank establish themselves as international players and now he is playing catch-up.

His man-of-the-match performance against Bath last week was another step forwards, leaving more people asking about his international ambitions. ‘I’m dual nationality so I could play for Italy or England.’

With England set to name a slimmed-down 28-man squad this week, the most likely scenario is that Odogwu holds out to see if Jones comes calling later in the year. ‘It wasn’t something I’d thought of until it started getting blown up in the media this week! It’s just been a case of ‘let’s see what happens’. I’ve had a couple of little conversations with both, but nothing concrete.

‘If something feels right, I’ll do it. I’m not going to just throw myself into the first opportunity because that may not be best for my development. Everything’s happening so quickly for me at the moment. The attention on me went up tenfold after the Bath game, so I’m just trying to slow down and process what’s going on.’