The wifi Woodstock! JAN MOIR watched as stars performed from home for the coronavirus heroes

Stevie Wonder did it in front of lavishly tasselled curtain tiebacks in his elegantly appointed music room.

Sir Elton John performs during ‘One World: Together At Home’ presented by Global Citizen on April, 18, 2020

Does Madam want a hot towel and a glass of cucumber water before her tonsil steam? No, get out of the way, idiot. For Celine is about to virtually duet with Andrea Bocelli and Lady Gaga as part of the biggest gathering of musical talent since Live Aid.

Welcome to One World: Together At Home (BBC1 and streaming platforms), a huge musical tribute put together to celebrate frontline workers around the world fighting the coronavirus pandemic.

On behalf of the World Health Organisation (WHO) and the Global Citizen movement, this WiFi Woodstock featured dozens of stars providing a tonic for the troops and an opportunity to raise money as they performed from the comfort of their own homes. 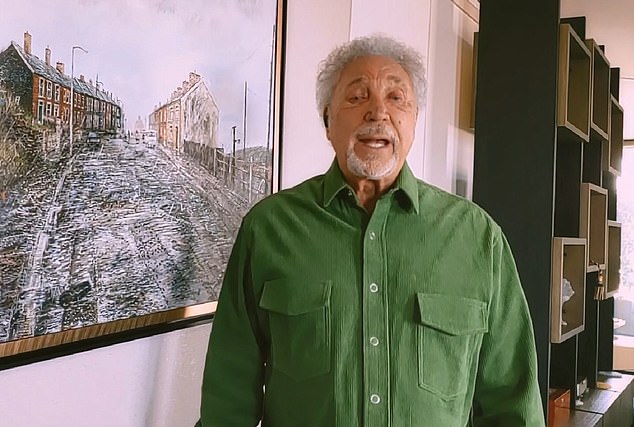 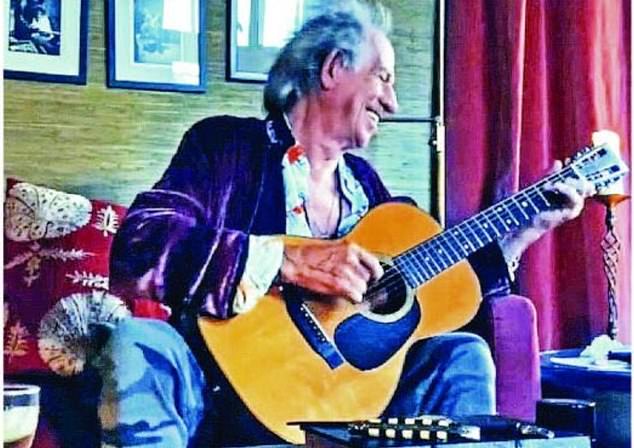 Keith Richards (pictured) and Mick Jagger were deep into the baronial country squire vibe – was that even a quill in front of Keith?

Efforts ranged from homespun sofa songs to high production numbers, one of the most impressive featuring Keith Urban in his music barn, accompanied by another two virtual Keith Urbans. Wife Nicole Kidman came in to give Keith number three a kiss at one point, sweet.

Little Mix beamed in from their various abodes, with Jesy singing under an alarmingly low-slung chandelier while Leigh-Anne seemed to be in a makeshift champagne bar in her living room.

Sir Tom Jones gave it his all in a green shirt in front of a painting of the Pontypridd street where he grew up and suffered childhood TB. His beautiful rendition of The Glory Of Love, a song from the 1930s, provided the most emotionally real moment of the entire broadcast 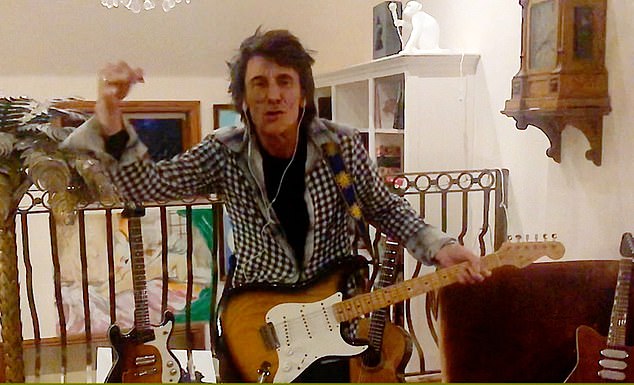 Ronnie Wood seemed to be on a minstrel galley in a dungeon, happily playing guitar next to a fake palm tree

Singer Charlie Puth did it in his bedroom with his unmade bed visible behind him – his mum is going to be furious – while out in a garage extension somewhere Chris Martin played snatches of Coldplay hits and kept on his knitted beanie. ‘I don’t like going to sleep because life is too exciting,’ he said. 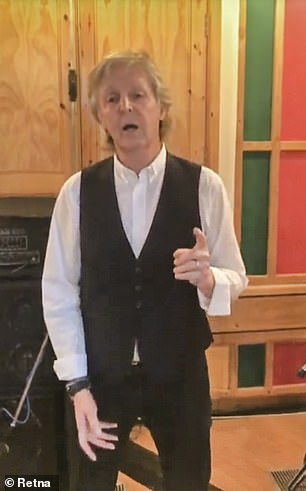 Beyonce seemed to be dialling in from the middle of a private island somewhere, Lady Gaga had full diva make-up and a brass lamp on her left shoulder, while John Legend was broadcasting live in front of his award shelves, groaning with Grammys and other gongs. He managed ten minutes of music before being joined by his irritating, attention-seeking supermodel wife Chrissy Teigen, wrapped in a bath towel and holding a glass of wine.

‘She is drinking rose,’ ventured Legend, who sells his own range of wines. ‘I won’t plug my own brand because it feels inappropriate at the moment, but you know what brand it is.’ Is there no end to his selflessness and altruism?

Despite this there were plenty of heartfelt messages and beautiful songs elsewhere, but it was the glimpse into the soft furnishing choices and decor eyesores of the stars that was the most entertaining. 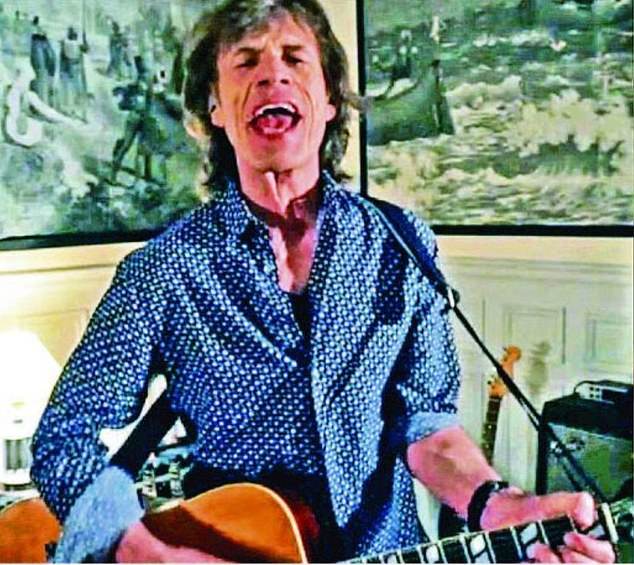 Mick Jagger rocks out in aid of ‘One World: Together At Home’ presented by Global Citizen on April, 18, 2020

What became clear in most cases was that the houses and rolling gardens of the rich and famous were so much bigger and grander than ours.

More from Jan Moir for the Daily Mail…

Would it really cheer everyone up, as we all glumly noticed that self-isolation takes on a much rosier complexion when you have an in-house studio, soaring ceilings, an orchard or two, space for a grand piano and in the case of J-Lo, a woodland disco complete with trees wrapped in fairy lights in which to entertain yourself.

She stood in front of one of them to sing and tell us that ‘people who need people are the luckiest people in the world.’

Yes, but those with their own in-house arboretums are even luckier.

Best of all were the Rolling Stones, broadcasting on a split screen from their various stately piles.

The bad boys of rock revealed themselves to be the stuffiest of trad dads when in the comfort of their own homes; right down to the thick velvet curtains, quartered oak doors and finely tooled leather books. 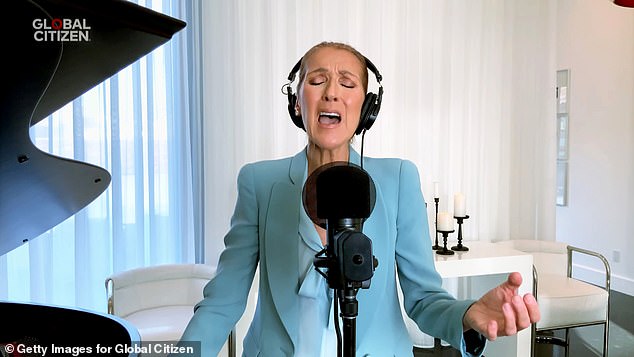 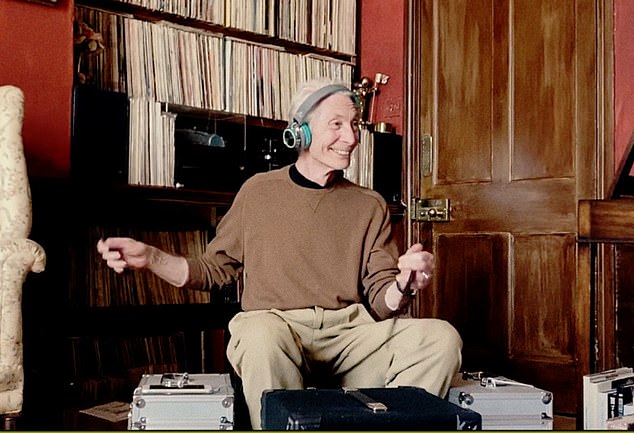 They sang You Can’t Always Get What You Want from rooms that suggested, actually they could – and did. The exception was Ronnie Wood, who seemed to be on a minstrel galley in a dungeon, happily playing guitar next to a fake palm tree he had possibly nicked from Trader Vic’s after too many Rum Giggle cocktails one night back in 1976.

His backdrop comprised of some of his paintings, a plaster monkey and a boudoir-sized glass chandelier.

Ronnie, if the look you are going for is Junk Shop Louche, you have succeeded. Keith Richards and Mick Jagger were deep into the baronial country squire vibe – was that even a quill in front of Keith? – while Charlie Watts had to pretend to play drums next to a padded Victorian settle against walls painted in what looked like Farrow & Ball’s Rectory Red.

Gentlemen rockers every one. Who would have thought it?