The winning images in a prestigious building photography competition have been revealed – and they are truly mesmerising.

The Art of Building Photographer of the Year contest, now in its 10th year, is run by the Chartered Institute of Building (CIOB) to celebrate creativity in the construction industry. The competition’s judges sifted through thousands of entries from photographers in more than 100 countries to draw up a shortlist of 12 before picking an overall winner.

They have awarded their prize to Pedro Luis Ajuriaguerra Saiz, a professional photographer from northern Spain, who captured a fascinating shot of Hemisferic, a science museum in Valencia, designed by Santiago Calatrava. His photo, which he called ‘Fish’, ‘cleverly captured the building and its reflections, to reimagine it as a living creature’.

Meanwhile, the public was also allowed to vote for its favourite. Taking home the public choice award, with more than 30 per cent of the vote, is Alexandr Bormotin from Ivanovo in Russia. His incredible image shows a futuristic new underground train station in Moscow.

Other stunning images to make the final shortlist include a dramatic shot of the City in London, an aerial image of the National Forum of Music in Wroclaw, Poland, and an incredible photo of window cleaners on a skyscraper in Abu Dhabi.

Caroline Gumble, chief executive at the CIOB, said: ‘So many images managed to create a sense of mood and place, it was a delight to judge the competition. The winning photographs both show the beauty and harmony in great architecture and are a reminder of the impact on our emotions and well-being that well-designed buildings can achieve.’ Scroll down to behold the two winning images and the other 10 that have been shortlisted…

The winner of the judges’ prize in the Art of Building Photographer of the Year contest is Pedro Luis Ajuriaguerra Saiz from Spain for this dramatic image of the Hemisferic science museum in Valencia, which he called ‘Fish’. Pedro said: ‘Due to the reflection of the water at night, the architecture of the buildings shows us the figure of a fish, perhaps prehistoric with its heart still alive’ 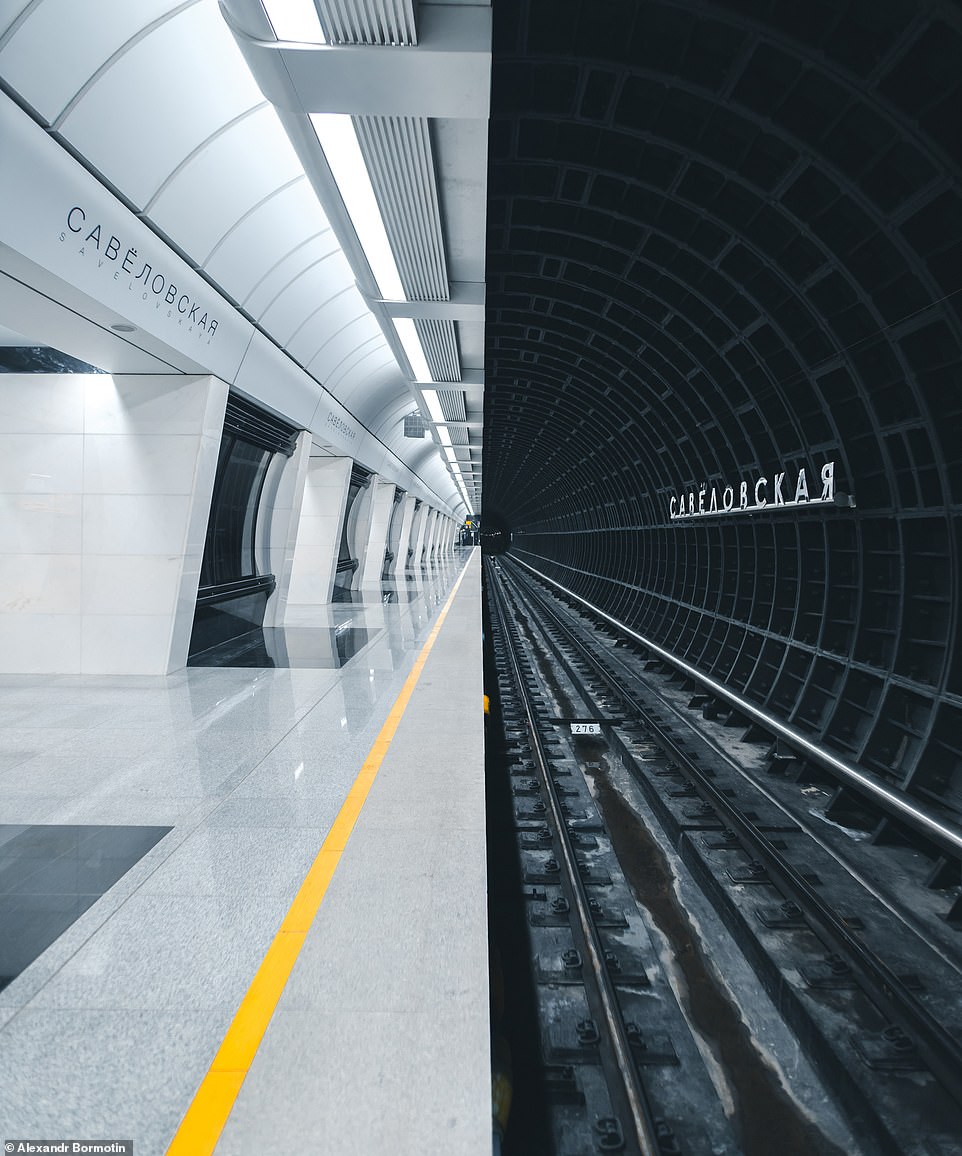 This shot of a train station in Moscow helped Russian photographer Alexandr Bormotin win the competition’s public choice award. He said that the station, pictured, is one of the newer ones on the network and that it has been built in a ‘futuristic style’ 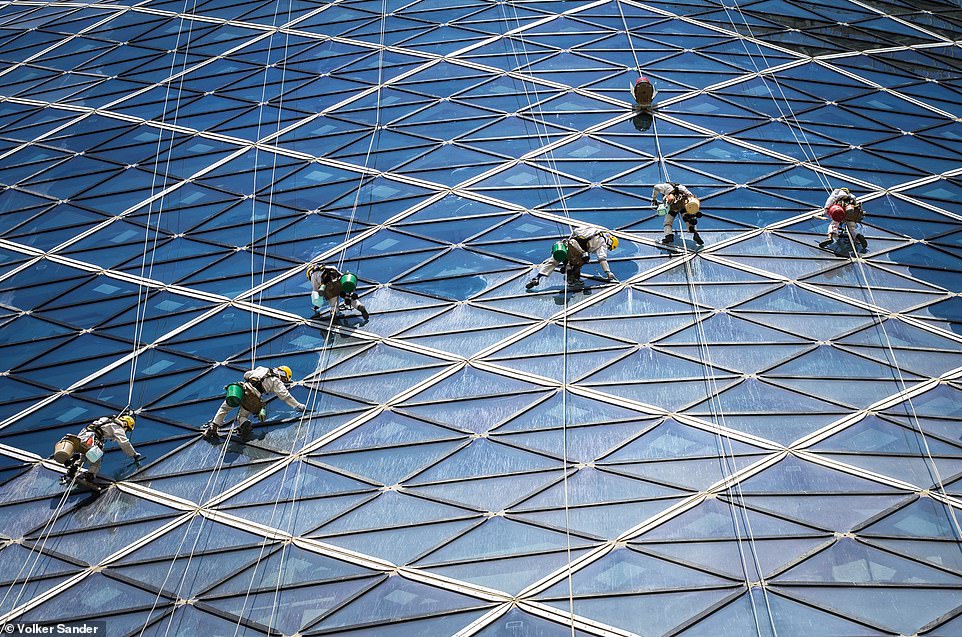 German photographer Volker Sander makes the shortlist with this incredible image of a skyscraper in Abu Dhabi, which he called ‘At Work’. He said: ‘The photo is an example of needful interaction between humans and buildings. Without the busy people cleaning the giant glass frames of the tower, the building would look quite ugly’ 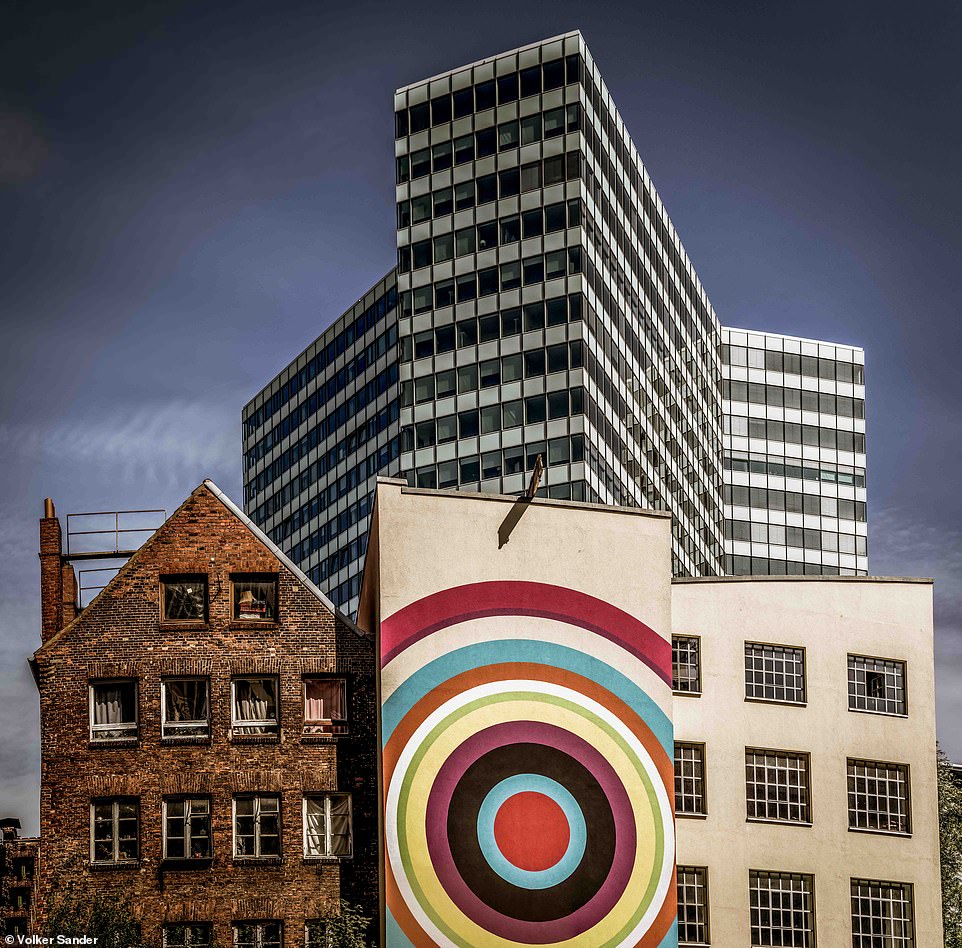 Another image by Volker Sander, which also makes the shortlist. It shows both old and new buildings in the German city of Hamburg. He said: ‘This picture shows the peaceful co-existence of old and new architecture. The buildings don’t fit together, but they are not fighting against each other. They show the creative development in the city centre’ 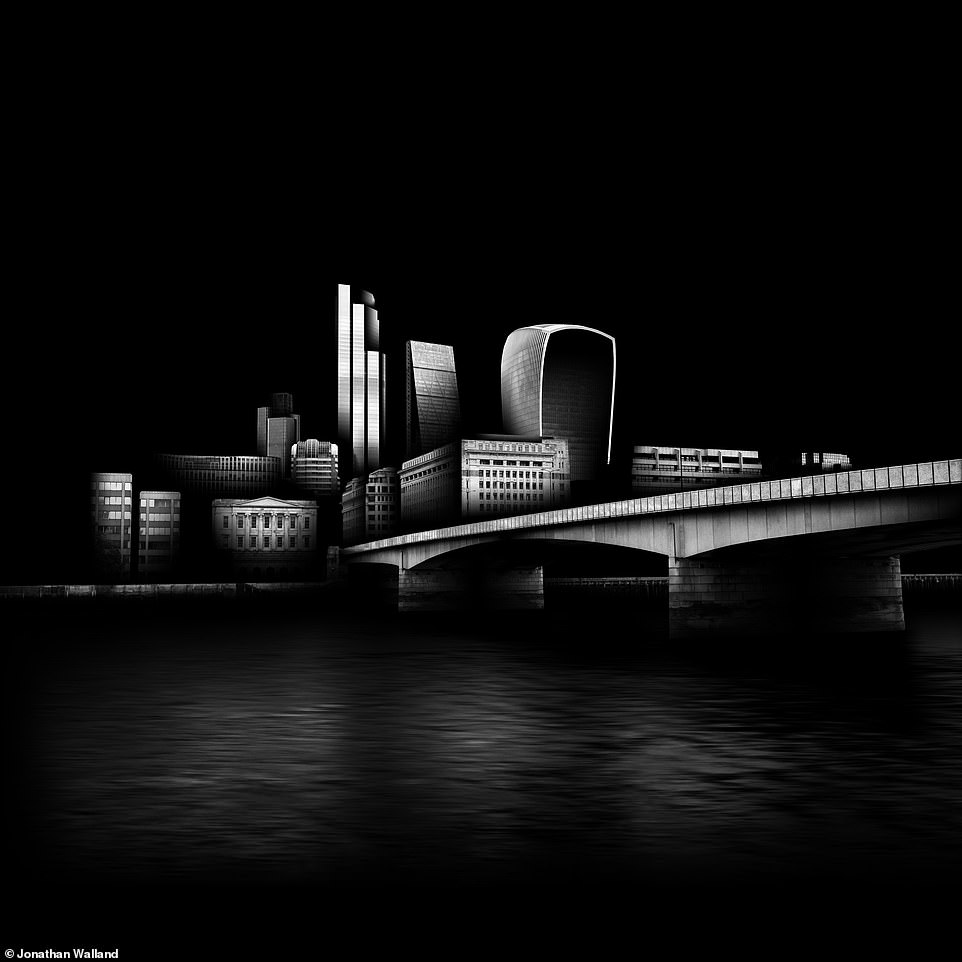 This dramatic shot, called Bank, was captured in London by photographer Jonathan Walland. He explained: ‘I use minimalism as a method of enabling clarity. My process eliminates distraction, keeping the viewer focused on the purest elements of photography; form, light, texture and the way these components amalgamate’ 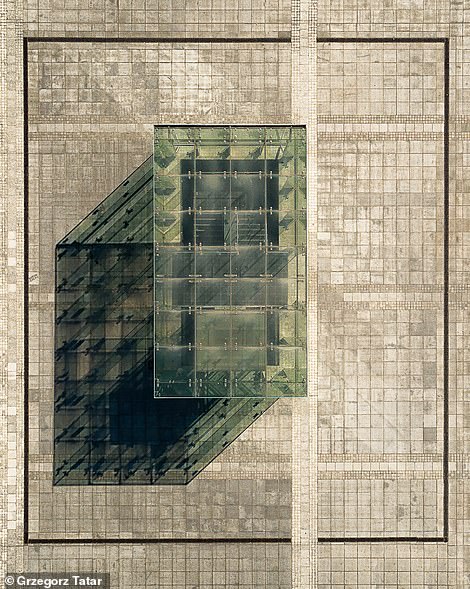 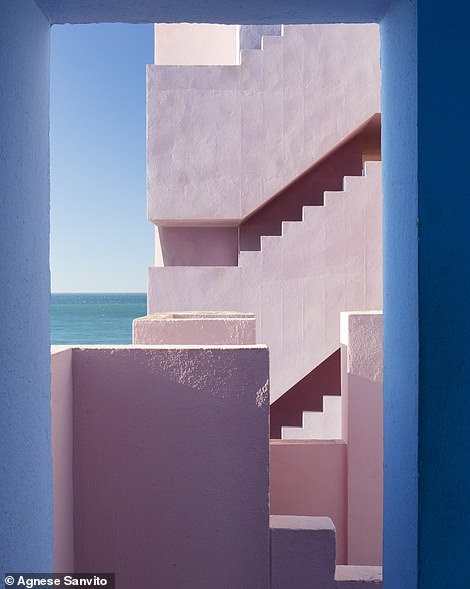 Grzegorz Tatar, a Polish photographer, impressed the judges with an aerial image, left. He said: ‘This is an aerial view of one of the underground entrances to the National Forum of Music in Wroclaw. It is an excellent example of axonometry in architecture.’ Spanish photographer Agnese Sanvito took this colourful image, right, of the famous Muralla Roja apartment complex near Alicante. She said: ‘When I photographed La Muralla Roja, it felt like being in a De Chirico painting due to the dream-like feel of the place. This image encapsulates for me the sense of light and colour. The blue frame offers a cinematic view and the soft tones of the early morning light captures the calmness and quietness of the building in its setting’ 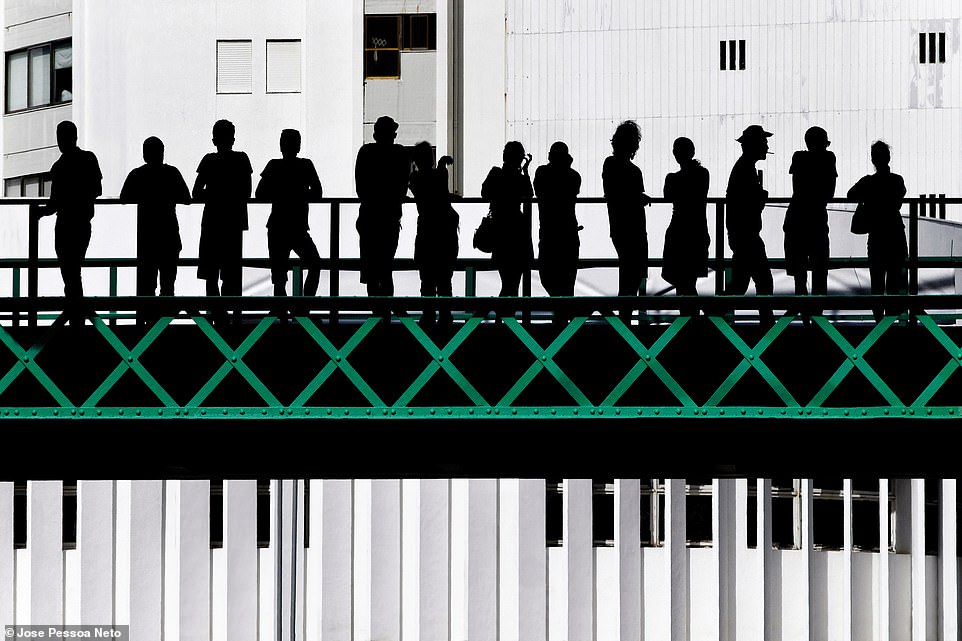 Portuguese photographer Jose Pessoa Neto captured this image in his home country and called it ‘Eiffel Bridge’. He said: ‘People were waiting for the street festival Senhora da Agonia – one of the biggest in Portugal. From the street, I saw these beautiful silhouettes, the bridge, the green crosses and the building behind, in harmony’ 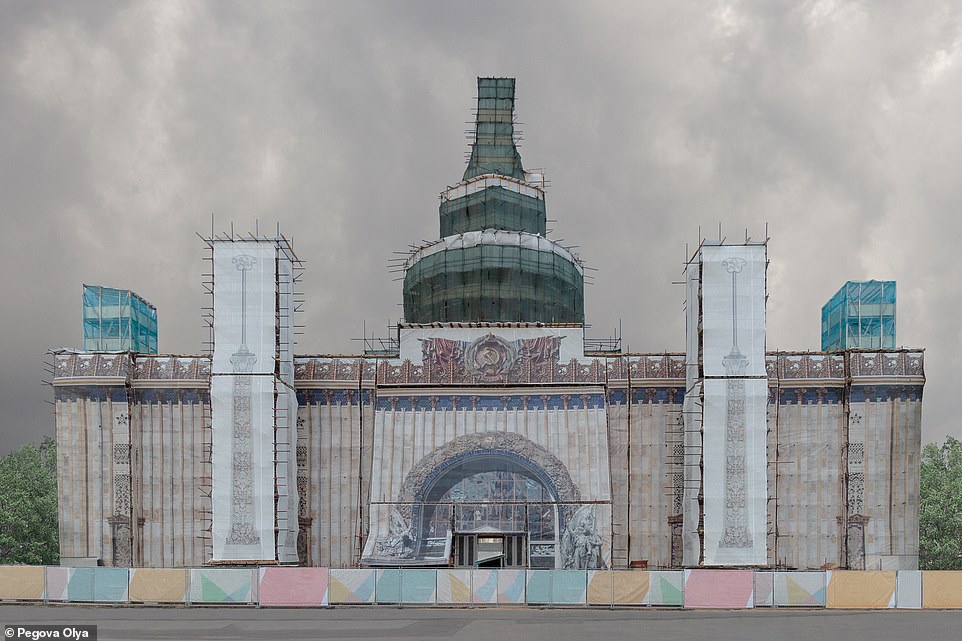 Pegova Olya shot this fascinating picture showing a building covered in a faux facade in Russia. She said: ‘In the past, faux facades were rare and temporary interventions in urban spaces, but today they have become a part of the city landscape, only being changed from time to time’ 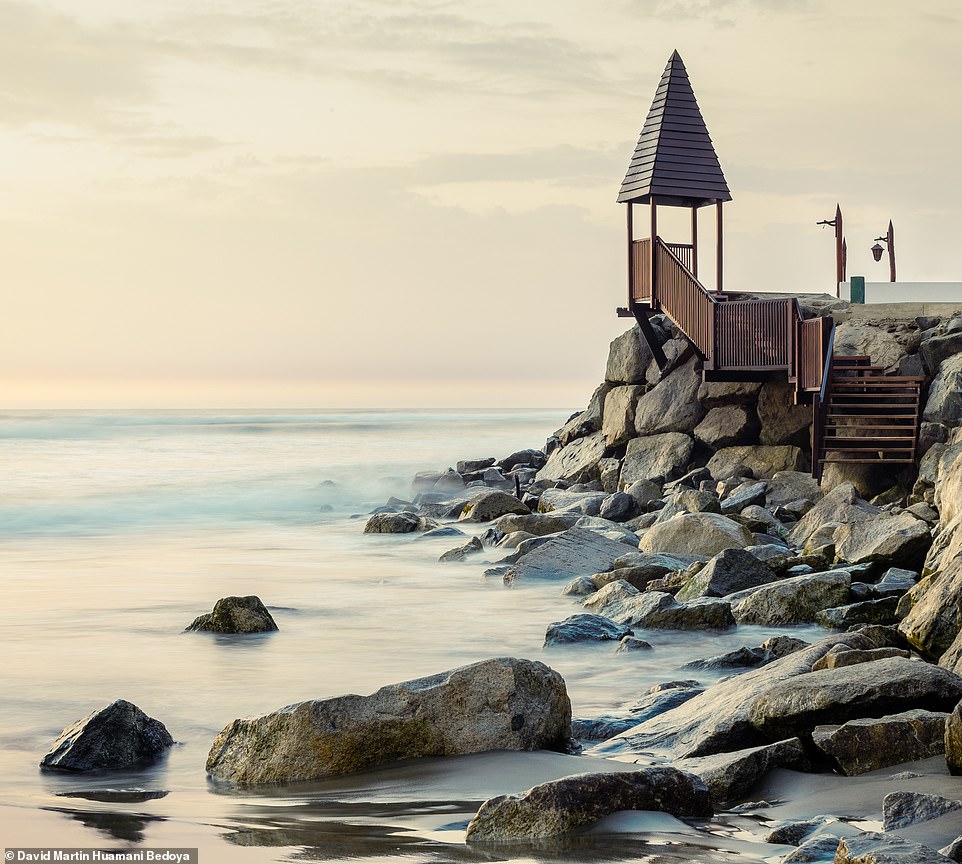 This image, called ‘Sea and Humans’, was captured in Peru by David Martin Huamani Bedoya. He said: ‘The intervention of man in nature is not always bad. The photo shows the tranquillity of nature and a balcony from where people can appreciate it better’ 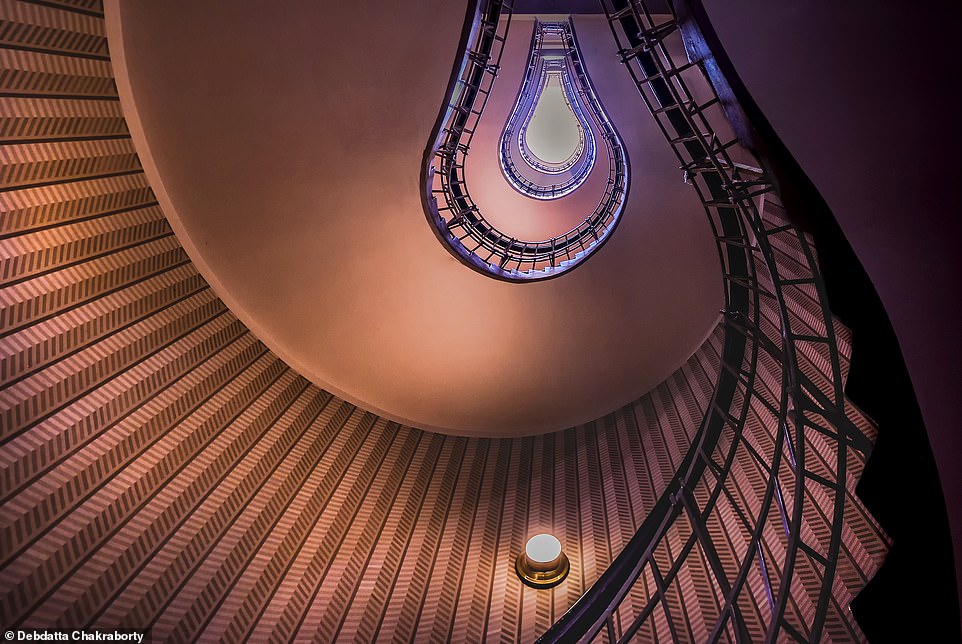 Indian photographer Debdatta Chakraborty shot this mesmerising image in the House of the Black Madonna in the Czech capital, Prague. He said: ‘The building was designed and built between 1911 and 1912. Josef Gocár built the house as the first example of cubist architecture in Prague, and it remains probably the most celebrated’ 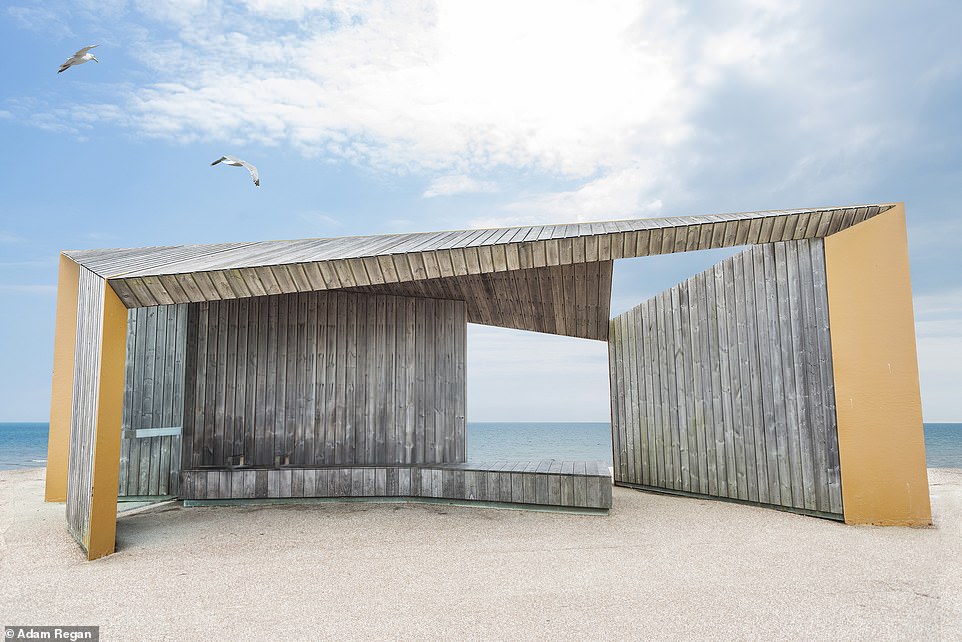 This shortlisted image shows the Bexhill Promenade Shelter on the south coast of England. It was captured by British photographer Adam Regan. He explained: ‘It is an elegant and appealing solution to a mundane problem’