The woman who nearly died of a broken heart at 26

A mother-of-two could have died when her heart stopped beating twice at the age of 26 after a traumatic break-up with her partner of seven years.

Helen Ross, now 38, from Canterbury in Kent, was diagnosed with stress-induced cardiomyopathy – also known as broken heart syndrome – after her partner left her.

She was so upset she collapsed and her heart stopped beating while she was working in Florida, leaving her needing a pacemaker for seven years afterwards.

Admitting she was upset by the split when her childhood sweetheart left her for a friend, Ms Ross was shocked when she found out it had actually damaged her heart.

‘I couldn’t believe a break up could affect me physically to the point where I could have died,’ she said.

Helen Ross, pictured recently with her sons Hugo (left) and Henry (right) was diagnosed with broken heart syndrome after her childhood sweetheart left her in 2006 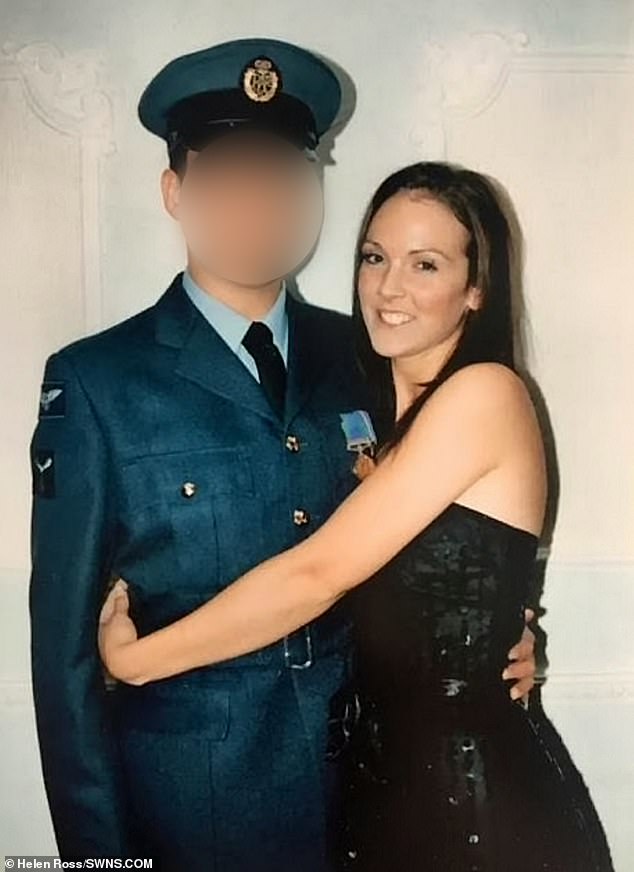 Ms Ross, pictured with her former partner, Andy, admitted she was upset by the split but was shocked when she discovered it had caused physical damage to her heart

The boys are children from a relationship after the one with her childhood sweetheart, Andy, which ended in literal heartbreak in 2006.

Ms Ross was 26 at the time and admits she was ‘inconsolable’ but jetted to Orlando, Florida, for a two-week modelling stint for fitness and fashion brands to take her mind off things.

But her trip was cut short when she collapsed on her first day of a shoot.

Her heart stopped again in hospital and doctors diagnosed her with stress-induced cardiomyopathy.

‘I had never heard of broken heart syndrome before it happened to me,’ Ms Ross said.

WHAT IS BROKEN HEART SYNDROME?

Broken heart syndrome, known medically as stress-induced cardiomyopathy or takotsubo syndrome, happens when the heart fails because of extreme stress.

It is usually triggered by an emotional event such as the death of a loved one.

The condition affects around 3,000 people a year in the UK, and is more common among women than men.

It causes part of the heart to become temporarily enlarged, preventing the organ from pumping blood properly. It can cause it to stop altogether.

Although broken heart syndrome is not triggered by disease – it isn’t linked to blocked arteries or high blood pressure – it is believed to be able to cause long-lasting damage by weakening the heart and affecting its pumping motion.

‘Fortunately, in the vast majority of cases the heart muscle function recovers within a few weeks. It is a rare condition overall. Most frequently it affects people in their 50s or 60s, although it has been seen in other age groups.’

‘I couldn’t believe a break up could affect me physically, to the point where I could have died.

‘I loved him to bits and could have never pictured myself without him after we’d built a life together – we’d only just bought a house.

‘I felt distraught by the break up, but I didn’t realise it had actually broken my heart.’

Stress-induced cardiomyopathy is a reaction by the heart to sudden release of stress hormones, which can be triggered by emotional upset.

This causes part of the heart to become temporarily enlarged and struggle to pump blood properly.

It may be misdiagnosed as a heart attack because symptoms and test results are similar, but there’s no evidence arteries become blocked in the condition.

The condition is more common among women than men and is more likely to affect older people, such as people who lose their lifelong spouses.

A study last year suggested the condition can cause long-lasting damage to the heart by reducing the strength of the muscle and slowing down its pumping motion.

‘I’d only been in Orlando for 24 hours and was feeling physically normal,’ she explained, ‘but out of the blue I just collapsed – there were no warning signs.’

Staff on the photo shoot called an ambulance and she was rushed to hospital, where she woke up 30 minutes later.

Doctors were dumbfounded and couldn’t explain why a healthy young woman had collapsed seemingly randomly, so they kept her in overnight.

And when she woke up the next morning she noticed a nurse watching her anxiously.

Ms Ross said: ‘She asked me how I was feeling and how I had slept, and I told her fine – as far as I was concerned, I’d slept like a baby.

‘She told me my heart had stopped beating while I was asleep – it had flatlined.

‘I was shocked and couldn’t believe it had happened while I was asleep, I could easily have died.

‘But weirdly, by the time the doctors had come rushing in with the defibrillator seconds later, my heart had started up again by itself. They called it pot luck.’ 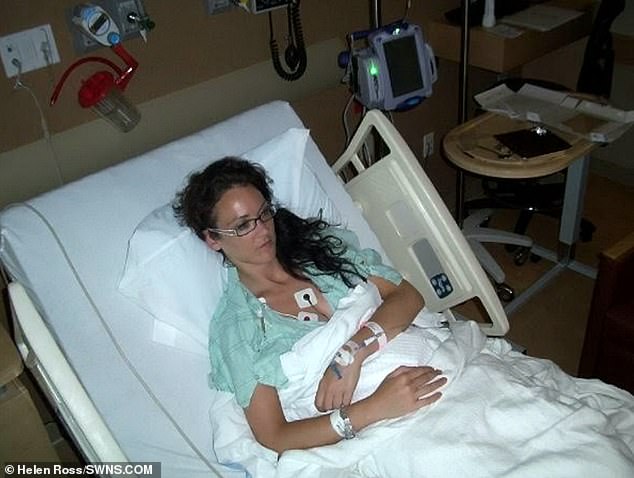 Ms Ross was kept in hospital in Orlando for three days after she collapsed, then returned home for further treatment in the UK, where she was fitted with a pacemaker to regulate her heart 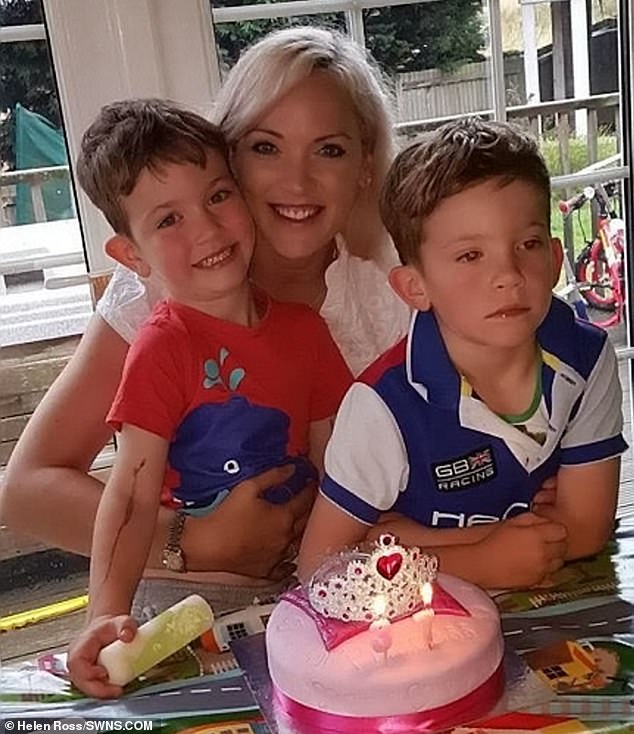 Doctors asked if she had experienced a recent trauma which might have triggered the heart problem and, when she explained the break-up, they diagnosed her with broken heart syndrome.

Ms Ross explained: ‘I told them how hard the break-up had been for me, how devastated I was and they nodded and immediately said it was to blame.

‘I had no idea that this sort of thing could happen, but they explained it isn’t entirely uncommon in elderly people who lose their life partner – but it was rare in someone so young.

‘They thought it had almost certainly happened to me the day before, and was the reason I had collapsed at the photoshoot.’ 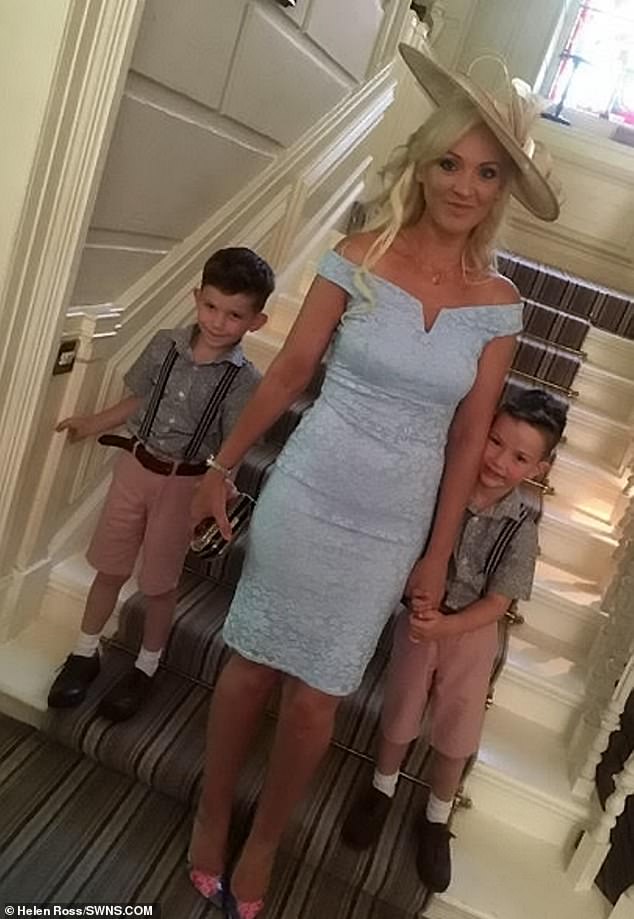 Ms Ross now lives with her two sons, who are from a different relationship, and vowed she would never let herself become so dependent on a man it would be life-threatening to break up with him

When back in the UK, Ms Ross was fitted with a pacemaker to regulate her heart, which she had removed in 2014 after no further complications.

She went to the University of Lincoln to study equine sciences and has since set up her own business, HRP Equestrian.

Having had relationships since the ill-fated one 12 years, Ms Ross vowed never to let herself feel so dependent on a man again that she risked her life.

She added: ‘It taught me to focus on the positives and everything I have going for me, as well as to love myself more.

‘I know now I will never let myself get in that position again.’