Therapist, 24, has to relearn how to walk, talk, read and write again after car crash

A therapist has had to relearn how to walk, talk, read and write after a horror car crash left her with a host of brain injuries that doctors failed to spot.

Kaitlyn McInerney from Albany, New York, smashed into a telephone pole after skidding on ice on her way to work in January 2017.

When the vehicle’s airbags failed, the 24-year-old’s head was slammed into the steering wheel at 30mph.

She was rushed to A&E where she had CT scans and X-rays and doctors told her she had severe concussion and whiplash.

Kaitlyn McInerney has had to relearn how to walk, talk, read and write again after suffering a traumatic brain injury from a car crash 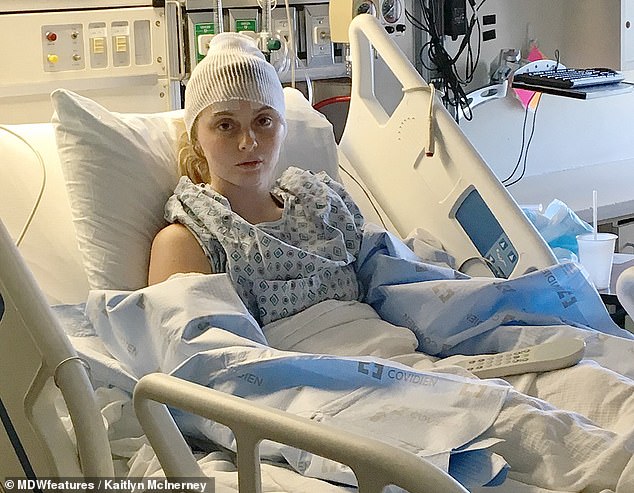 The 24-year-old smashed into a telephone pole after skidding on ice, slamming her head against the steering wheel at 30mph

Ms McInerney was told she couldn’t speak because she’d suffered PTSD in the crash – but was reassured it would come back on its own.

She was released just one day after the accident as doctors believed she would recover in a matter of days.

It took her four months before she was admitted to a rehabilitation facility in May when her symptoms persisted.

She was still struggling to talk, walk, read and write and suffering from severe headaches, dizziness, nausea, sensitivity to light and sound.

TBI symptoms range from physical effects such as balance problems, headaches and dizziness. 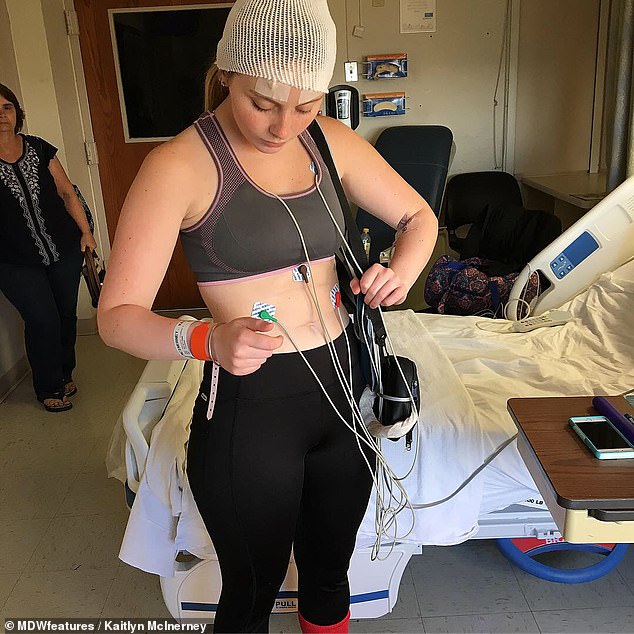 She was rushed to A&E – but was discharged the following day. Pictured: being treated for pseudo seizures after her symptoms persisted 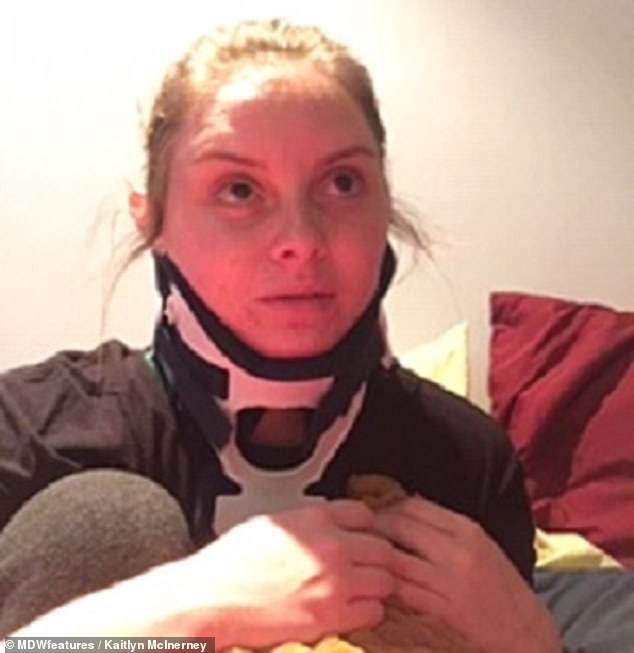 The car crash victim was diagnosed with a number of brain injuries following the horror smash.

She was told she had a traumatic brain injury (TBI), aphasia, post-concussive syndrome, photophobia, psuedo seizures and migraines.

Aphasia – Disorder that results from damage to portions of the brain that are responsible for language. It impairs the expression and understanding of language as well as reading and writing.

Post-concussive syndrome – Brings on delayed symptoms of a concussion, including dizziness, sickness and feeling dazed.

Photophobia- A hypersensitivity to light, causing migraines and motion sickness.

Psuedo seizures – Cause involuntary muscle stiffening and jerking, confusion, sudden loss of balance and a lack of awareness of surroundings.

They also include cognitive, emotional and behavioural effects such as memory problems and anger.

Aphasia is a disorder that results from damage to portions of the brain that are responsible for language.

For most people, these areas are on the left side of the brain. The disorder impairs the expression and understanding of language as well as reading and writing.

Post-concussive syndrome brings on delayed symptoms of a concussion, including dizziness, sickness and feeling dazed.

Photophobia is a hypersensitivity to light, causing migraines and motion sickness.

Since being in rehab, Ms McInerney has relearned how to do basic tasks with the help of occupational, physical, vision and light and speech therapies.

The therapist said she still replays the crash in her head and ‘mourns the person she used to be’.

She said: ‘Sometimes I have dreams and nightmares that replay the entire thing for me.

‘Whenever it snows out, I have the worst anxiety and refuse to leave my house or even get in a car.

‘I remember being awake and aware of everyone that was around me. I remember seeing and hearing the firemen around me.

‘I couldn’t get a single word out. I tried so hard to scream or make some type of noise – anything. 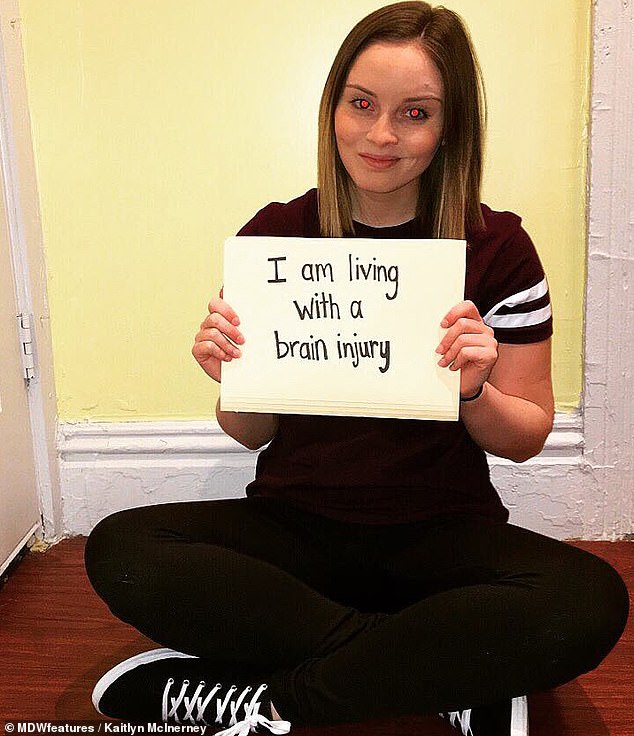 ‘But all I could do was sit there in silence. I was stuck in a daze as they pulled me out of my car and put me on the gurney and into the ambulance.’

Ms McInerney knew things weren’t right when she was discharged from the hospital just a day after the crash.

She said: ‘Even though they told me I was going to be fine leaving the hospital that day, I knew I had a long road ahead of me.

‘I knew what I was experiencing and feeling wasn’t normal. The severe headache, extreme dizziness and nausea, and sensitivity to light and sound.

‘And sitting at home not getting treatment or help for months was just adding to the pain.

‘When I was finally accepted as a patient at the rehab centre, I knew after my first day being there that it was going to be tough.’

Ms McInerney added: ‘Realising that the things that used to come so easily to me, things that I used to take for granted, I couldn’t do at all, that was the worst. 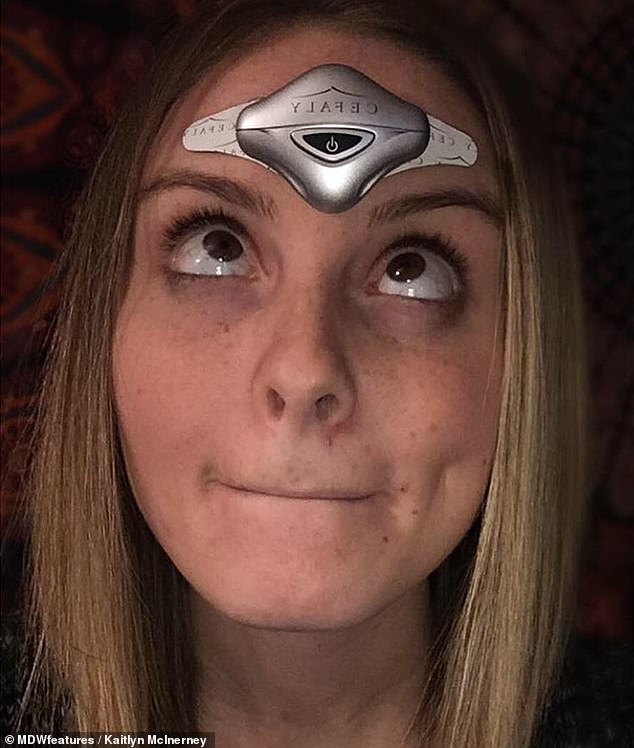 The New Yorker having a treatment called Cefaly for her migraines which she has everyday. It works by sending micro-impulses to nerves in the brain to relieve headache pain

‘That hurt the most. Because I could try to do these tasks a million times and I’d still fail- continuously.’

She revealed the toughest part about her recovery has been ‘mourning’ the person she used to be.

The therapist added: ‘I think the hardest part of this recovery is grieving the loss of the person I was, while still being alive.

‘This brain doesn’t work like the old one, but I can learn to navigate with it. I found that my broken brain has a different set of abilities.

‘I made the decision to work with my brain instead of against it. I’m looking forward to the day that I choose to greet the new me.

Ms McInerney wants to use her experiences to inspire others in similar situations.

She said: ‘My advice for anyone who is dealing with a traumatic brain injury, or chronic illnesses, or invisible disabilities – do not feel like you need to wait until you are one hundred per cent healthy before you can start to live your life, because you will be waiting forever.

‘Whatever you have, it’s a diagnosis, not a disgrace. Do not be ashamed or embarrassed.’