Theresa May faced a new Brexit rift with David Davis last night after claims that he has raised private doubts that the UK is certain to leave the EU.

The Prime Minister used her official New Year message to restate her determination to deliver on the result of the 2016 referendum vote.

She vowed to ‘keep up progress in 2018’ on the next stage of the EU exit talks, declaring: ‘Making a success of Brexit is crucial.’

The vast majority of voters ‘just want the Government to get on and deliver a good Brexit – and that’s exactly what we are doing’, she added.

But her defiant message was undermined by reports that Mr Davis told a private meeting it was still possible the decision to leave the EU could be reversed.

It follows a seminar hosted by Mr Davis at his Whitehall department shortly before Christmas, when he invited members of leading think-tanks to discuss the Government’s success in getting an agreement with Brussels on moving to the next phase of Brexit talks.

Some of those present expressed surprise at Mr Davis’s remarks.

‘For the Brexit Secretary to express the thought that the whole thing might never happen was not what I expected – even behind closed doors,’ one source said.

‘Nor was I the only person who reacted like that. It didn’t square with the Prime Minister’s mantra of ‘Brexit means Brexit’.’

Mr Davis claimed his remarks had been misinterpreted.

A spokesman said: ‘He was simply repeating the PM’s point that the deal is good for people who supported Leave and who fear Brexit isn’t going to happen, and Remain supporters who fear no deal.’ 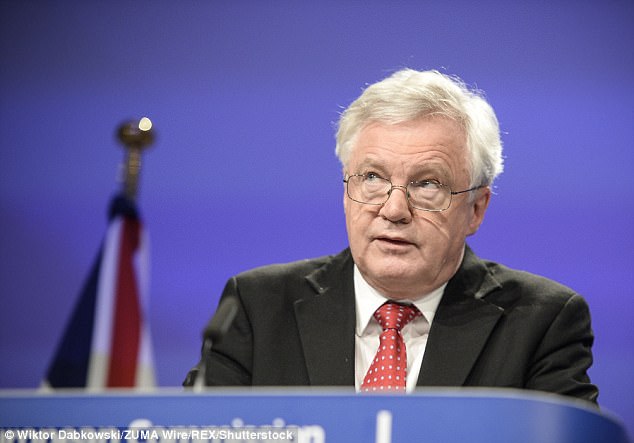 The row comes after a series of damaging reports in recent weeks about Mr Davis’s handling of the Brexit negotiations, including claims that he has been sidelined by No 10.

He was accused of going back on a pledge to publish dozens of detailed reports showing how Brexit would affect the economy; said ‘you don’t have to be clever’ to handle Brexit talks; and suggested leaving the EU could have as much impact on the UK as the 2008 credit crash.

Internet giants were last night threatened with a multi-million-pound tax penalty unless they agreed to help combat the terrorist threat to Britain.

‘If they continue to be less than co-operative, we should look at things like tax as a way of incentivising them or compensating for their inaction,’ he added in an interview.

‘Because content is not taken down as quickly as they could do, we’re having to de-radicalise people who have been radicalised.

In her New Year message, Mrs May made no reference to a series of setbacks in 2017 which threatened her hold on power, including the botched Election and losing three Cabinet Ministers in a spate of scandals.

But she dismissed claims that she was losing her grip.

‘The real test is not whether challenges come; it’s how you face them, whether you allow a task to overcome you, or tackle it head-on with purpose and resolve,’ she said.

In his New Year message, Labour leader Jeremy Corbyn said he was on the brink of ousting Mrs May from No 10.

‘We are a government in waiting,’ he said. ‘The hope of a new Britain is closer than ever.’

Mr Corbyn added: ‘Now the Establishment’s secret is out: they’re not as strong as they appear. Let’s face it, they have no idea how to fix their broken system or upgrade our stagnant economy.

‘In 2018, Labour’s mission is to give our people support and security and use their talents, unleash their creativity and fulfil their hopes.’