Spain’s Prime Minister has claimed Brexit could mean splitting the sovereignty of Gibraltar between Westminster and the UK.

Leader Pedro Sanchez announced on Saturday that Spain will support the Brexit divorce deal but that it would ‘open talks on joint sovereignty’ of the British overseas territory.

He said EU leaders have given Madrid a say in the future of Gibraltar’s status, causing outrage among Tory MPs at home, who claim Theresa May has ‘sold out’ the Brits living there.

Mr Sanchez said yesterday: ‘Europe and the United Kingdom have accepted the conditions imposed by Spain. Therefore, as a consequence of this, Spain will lift its veto and tomorrow will vote in favor of Brexit.’

But he also said Brexit ‘is going to allow us to have direct negotiations with the UK regarding Gibraltar.’

Conservative MPs have slammed Theresa May for ‘caving in’ over the Rock after giving assurances to her Spanish counterpart over the weekend.

Yesterday she promised to ‘always stand by Gibraltar’ and that its status as a British Overseas Territory will not change.

But the other members of her party are not convinced, with former Deputy Commons Speaker Nigel Evans saying yesterday: ‘To sell out 17.5 million people [who voted to leave the EU] with her Brexit deal is one thing, to go against the wishes of the DUP who keep us in power is another.

‘But to sell out the utterly patriotic British people who live on Gibraltar is simply beyond the pale.’

The Ribble Valley MP added: ‘Theresa May is dining in Brussels with people who are delighted with her deal – in fact they could have written it themselves.

‘But on Monday she will return to a very different atmosphere in Westminster – one of betrayal.’

Romford MP Andrew Rosindell also slammed her over Spanish negotiations, saying: ‘The Prime Minister has to show that she will be utterly true to her words that there will be no compromise on Britain’s right to defend and negotiate on behalf of Gibraltar.

‘She must vow that Spanish attempts to use this constitutional weapon to try somehow to divide the Rock and the UK will not work.’

Tory Eurosceptic Nadine Dorries said: ‘May has capitulated to every single EU demand. She’s abandoned Northern Ireland, and now Gibraltar. At no time does she push back.’

Liberal Democrat Brexit spokesman Tom Brake claimed the Prime Minister had ‘caved in’ and ‘appears to have cast the people of Gibraltar aside’. 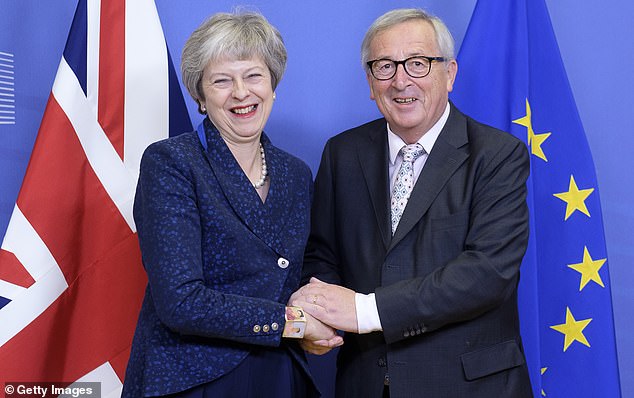 Theresa May (pictured with EU Commission President Jean Claude Juncker in Brussels yesterday) she had reassured Spain over Gibraltar and they will vote for her EU withdrawal agreement at today’s summit. But MPs warn she is ‘selling out’ the residents of the Rock

Theresa May said on Saturday talks with her Spanish counterpart had been ‘sensible and constructive’ after he threatened to boycott today’s all-important Brexit summit.

But Mr Sanchez’s apparent stepping up of his bid to gain more influence over Gibraltar is causing mass controversy there and at home.

He implied that assurances from EU leaders could mean Spain’s relationship with the the British territory could radically change post-Brexit.

He said yesterday: ‘The European Council and the European Commission have backed Spain’s position, and backed it as never before.’

Spain’s Europe Minister Josep Borrell Fontelles further inflamed tensions this week by saying Brexit poses the biggest shake-up to the sovereignty of the island peninsula since it was handed to the British in 1713 with the Treaty of Utrecht.

Almost all of the peninsula’s residents voted to stay in the EU and are nervous about what Brexit will mean for trade, customs arrangements and island security.

The local economy is propped up mainly by customs duties, offshore finance and gambling.

Gambling giant Bet365 has based its international operations there since 2014.

Even with EU President Jean Claude Juncker saying the Commission will give Mrs May’s withdrawal agreement the green light, MPs back at home are still likely to have objections.

MP Mr Rosindell directly warned Mrs May’s future could hinge on the issue, saying: ‘If there is any sign of any backtracking or watering down on this issue, that alone will inspire huge numbers of people to lose confidence in her leadership’.

It could make her battle to get her final EU withdrawal agreement through the Commons in mid-December even more difficult than she thought. 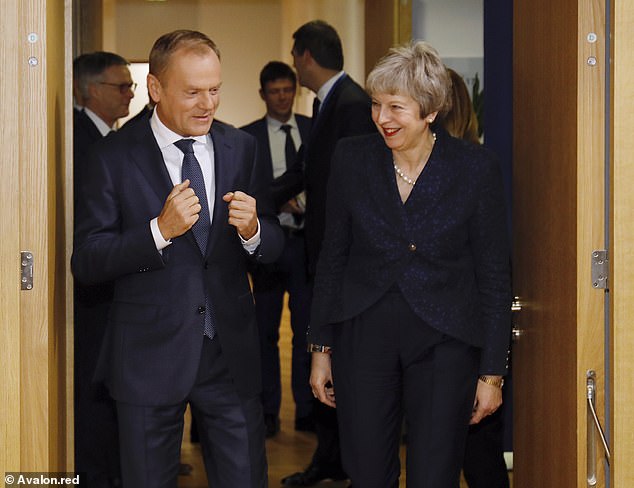