Theresa May yesterday hailed the prospect of a major trade deal with the US after Brexit, saying it was ‘in both our interests’.

The Prime Minister met President Trump for the first time since his visit to the UK in July on the fringes of the UN Security Council last night.

Speaking ahead of the meeting, Mrs May insisted a US/UK trade deal was still on the cards. She said: ‘In relation to a trade deal in the future I would say President Trump and America want to do a good trade deal with us. It is in both our interests to do that trade deal.’

She added: ‘I believe that when we have negotiated that deal it will be put in place. That is what coming to an agreement is about – both sides agree and both sides do it.’

Asked why she would trust the President’s promises, she said he stood behind the UK on Nato and by expelling Russian diplomats after the Salisbury poisonings.

Addressing a business audience in New York earlier in the day, Mrs May suggested that Britain and the EU could still do a deal despite the acrimonious collapse of talks in Salzburg last week. She said there was much ‘common ground’ between the two sides.

She told the Bloomberg summit she understood there was ‘uncertainty’ around Brexit. ‘Just if I can say this again, we believe that we will and can get a good deal.

‘And that’s because it’s not just about the UK, it’s about the EU as well, and I think that continued trading relationship is going to be good for both sides.

‘But there are several weeks of intense work to be done in order to get to that point.’

This summer President Trump’s visit to the UK got off to a terrible start when he criticised her approach to Brexit and warned it could scupper a deal with the US. 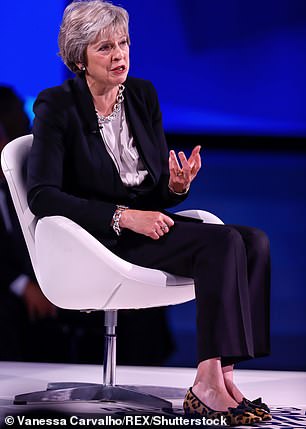 Addressing a business audience in New York earlier in the day, Mrs May suggested that Britain and the EU could still do a deal

But afterwards he declared the relationship between the two countries to be at ‘the highest level of special’.

He also dangled the prospect of a post-Brexit trade deal that could ‘quadruple’ the UK’s £100billion annual trade with the US. The administration has made no secret of the fact it wants the UK to make a ‘clean break’ with the EU.

The PM’s Chequers plan would keep Britain tied to EU regulations on goods and food.

Her Eurosceptic critics, who want a looser relationship with the EU, say it will severely curtail, if not scupper, any US deal.

Mrs May was also asked by journalists how she coped with the pressure of her job.

‘You focus on where you want to get to and then work out how to get there and then just do that and put it into practice.

‘Yes different jobs have different challenges. If you believe in your goal that’s how you get there.

‘I believe absolutely in delivering on the people’s vote and doing it in the best way for the UK.’

Talks: Theresa May shakes hands with Donald Trump in a meeting at the UN last night

‘Weeks of intense work to be done’