Theresa May hits back at ‘Maybot’ leadership jibe

Theresa May today tried to brush off descriptions of herself as a ‘Maybot’ by insisting ‘I have feelings’.

She also fended off accusations that she looks downbeat and said ‘it’s not miserable’ being Prime Minister.

Mrs May said she is getting on with what the British public want her to do and coming up with practical policies to improve the lives of ordinary people.

The beleaguered PM has been widely criticised for her robotic style, which many have blamed as one of the reasons behind the Tory Party’s election disaster.

She was particularly criticised after she failed to publicly speak to survivors of the Grenfell Fire on her first visit to the burnt-out block in the aftermath of the tragedy.

This morning, Mrs May revealed she wept when she later spoke to survivors of the fire while they were in hospital.

Theresa May, pictured in Manchester today, said she is not a Maybot because she has feelings

She made the revelations on the eve of her of her Tory Party speech tomorrow, where she will try to fire up activists after her election disaster.

Asked if she was upset at being called a ‘Maybot’, the PM told Five News: ‘I’m certainly somebody with feelings. I don’t recognise that characterisation of myself.

‘The simple thing is that I’ve always thought that when you are a politician is to do what you can to improve the lives of members of the public. That’s what the focus should be on.

MAY SAYS SHE WEPT ON GRENFELL VISIT 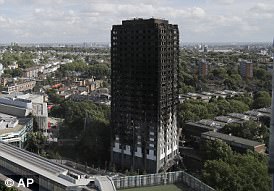 The burnt out husk of Grenfell Tower

Theresa May today revealed she wept when visiting victims of the Grenfell Tower fire in hospital.

Mrs May was criticised at the time of the tragedy in June for an unemotional response.

But in an interview today she said: ‘I felt the tragedy very much, because there were people who had died, but also other people who had lost everything.

‘That was brought home to me very clearly when I went to a hospital a couple of days later and met some of the people who had survived the fire.

‘They told me that some of them had lost family members. I can tell you, that was a very emotional experience, meeting them. Others told me that they fled their flats and everything had gone.’

Asked whether she was moved to tears when talking with survivors, Mrs May replied: ‘Yes, there were some pretty shattered people there.’

And pressed by presenter Nick Ferrari over whether she ‘shed a tear’, she said: ‘Yes.’

‘There’s a lot of talk these days of personalities and so forth.

‘But actually when it comes down to it, political personality doesn’t make the difference between somebody getting a job and or getting a job, between that job being created in a balanced economy or not.

‘It’s the actions of government that matter.’

The Tory party conference has been overshadowed by Cabinet in-fighting and talk that Mrs May could be ousted as Tory leader by Boris Johnson.

While many observers have pointed out she looks downcast, while the main hall at conference has been somewhat muted and usually only half full.

Asked by Channel 4 News, why the conference seemed in such a miserable mood she insisted it was not.

She said: ‘The people I meet haven’t been down, they’ve been upbeat.

‘They are upbeat about the arguments we need to make, the battle of ideas we will now be entering into, showing why it is that free market economies are those that actually provide for people, provide for people’s livelihoods, provide a better future for people.’

And she insisted that she is enjoying being Prime Minister – despite her troubled time in the office.

And she insisted that Boris Johnson did not change her flagship Florence speech.

She said: ‘No, the Florence speech was the result of discussions around Cabinet and, yes, my judgement about what it was necessary to say at this stage in the negotiations. The whole Cabinet came together. 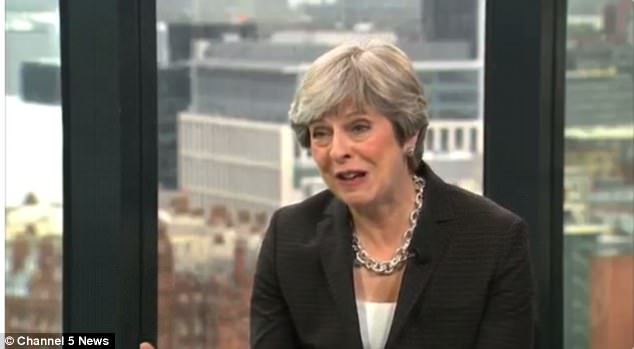 Theresa May, pictured during the Channel 5 News interview today, also insisted she is not miserable as Prime Minister – despite her troubles in No10 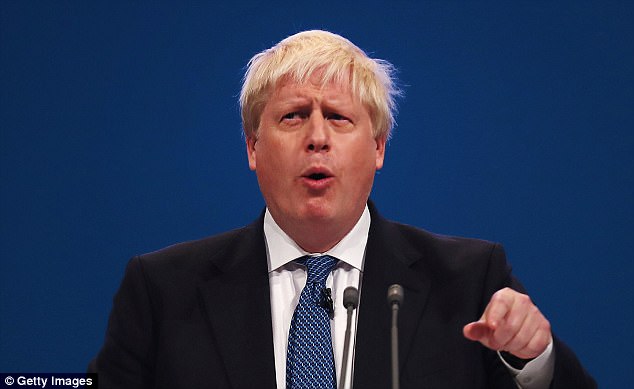