Theresa May has been accused of trying to tie Boris Johnson’s hands as she seeks to push through a £27billion funding pledge for education.

She is understood to be planning to present her three-year plan to Cabinet as soon as tomorrow as part of a bid to shore up her legacy.

Government sources said she ‘is still Prime Minister’ and ‘education is very high on her list of priorities’. However, the move is being resisted by the Treasury amid claims it would be ‘immoral’ to limit the ability of Mrs May’s successor to deliver on their own pledges.

One Cabinet minister said the Prime Minister was attempting to ‘stitch up’ a deal with the Treasury and then ‘bounce’ ministers into signing it off ahead of a public announcement.

‘It really has to be a decision for the next person,’ said a Whitehall figure. ‘It is just not moral for the PM to make this commitment.’ Mrs May’s proposed boost for education amounts to about £7billion a year on resources, including staff, and £2billion per year on capital expenditure, such as books and building repairs.

It would not require legislation and is the biggest of the ‘legacy projects’ she is trying to secure before leaving No10.

It follows a separate funding increase for the NHS last year. 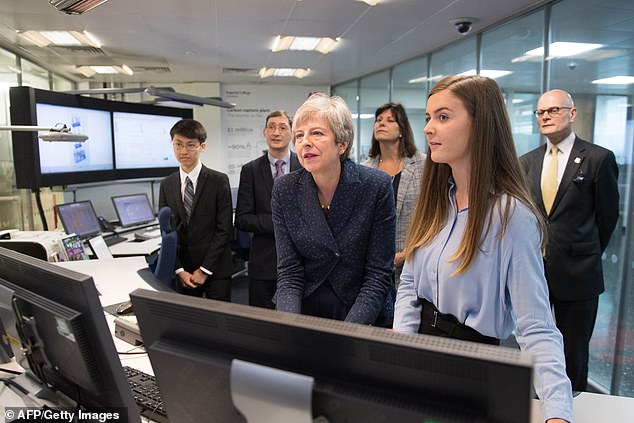 Mrs May visits Imperial College in London where she was shown machinery which converts carbon dioxide into oxygen. Government sources said she ‘is still Prime Minister’ and ‘education is very high on her list of priorities’