Labour have accused the Government of still refusing to ‘move on any of their red lines’ in the cross-party talks on getting a Brexit deal.

Shadow business secretary Rebecca Long-Bailey also hit back at claims from the Conservatives that her side has been stalling, saying ‘we’re certainly not dragging our heels’.

She told Sky News’ Sophy Ridge on Sunday: ‘Honestly I think the discussions so far have been productive, they’ve gone into a lot of detail, there seems to be a willingness on both sides to move towards some form of consensus.

‘But as yet we haven’t seen the Government move on any of their red lines, we’re having further discussions this week and hopefully we’ll see some movement.’ 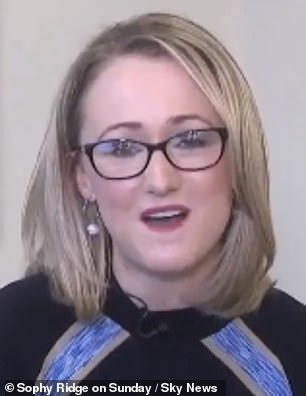 Ms Long-Bailey added: ‘But at the moment we are focusing on the detail, where we stand in relation to our relevant positions, and where potentially we could move to.

‘But we want to see hard and fast movement on those red lines as quickly as possible.’

Asked if a second referendum was one of Labour’s ‘red lines’ in the talks, she said Jeremy Corbyn and his team were ‘not being hugely prescriptive on the minute detail of specific elements because we are willing to compromise and we are willing to be flexible’.

Pressed on whether if any proposed deal met all her party’s criteria would they sign it off without an agreement to put it to a public vote, she refused to say, but added that if they were not met then ‘all options are on the table which includes campaigning for a public vote’.

Ridge said that sounds like a second referendum was not a red line for Labour, asking: ‘Correct me if I’m wrong?’

Ms Long-Bailey replied: ‘No, a public vote in the event of the situation that I’ve just outlined has always been our party policy, now we have to be flexible in where we move on, we’ve got to keep all options on the table and that’s what we’re doing.

‘So until we find out out what the final deal vote will be, we are of course pushing the Government to consider the policy option that we have which is a public vote to avoid a damaging no-deal Brexit or a bad deal, and they are considering that. 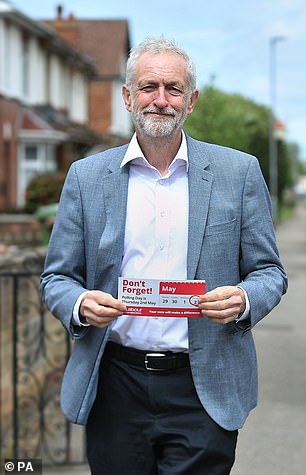 Asked if a second referendum was one of Labour’s ‘red lines’ in the talks, Ms Long-Bailey said Jeremy Corbyn and his team were ‘not being hugely prescriptive on the minute’

‘They haven’t come back with any confirmation as to whether they’ll move on that red line as they haven’t with a number of their other red lines, but certainly we’re outlining our party policy very very clearly.’

Challenged about Labour’s policy on a referendum, shadow communities secretary Andrew Gwynne told the BBC’s Andrew Marr Show: ‘Our manifesto is going to be agreed by the National Executive Committee on Tuesday.

‘I expect the NEC will endorse Labour’s policy that came out of the conference.’

The conference policy keeps the option of a referendum on the table, but pro-EU Labour MPs have said it should be a condition of any Brexit deal.

Mr Gwynne said: ‘I want to ensure that we avoid a bad Tory Brexit or a no-deal scenario. In those circumstances, yes, I think that wasn’t on the ballot paper in 2016, we should then perhaps ask the people ‘is this actually what you want, a confirmatory vote, do you support what the Government’s proposition is?’.

‘But let’s see what comes out of these talks because I hope that the Government can move on some of these red lines so that we can get a more sensible approach towards Brexit going forwards.’

As the talks between the Tories and Labour are set to resume this week, a former Brexit minister has claimed any deal that is voted through would cause the Government to ‘collapse’ by losing the support of the DUP.

Steve Baker, deputy chairman of the European Research Group of Eurosceptic backbenchers, told the Sunday telegraph: ‘Any [potential] leader who continues to vote for this deal, who accepts it being put through on Labour votes to deliver Brexit in name only, will need to explain how they are going to achieve a confidence and supply arrangement to prop up their Government.

‘You will find yourself leading a Government which collapses if you ram this deal through over the heads of the DUP. I just cannot see how it would be otherwise.’

Mr Baker added: ‘This is not just about delivering Brexit, it’s about keeping Jeremy Corbyn and John McDonnell away from the levers of power.’