Theresa May today faces her cabinet as backbenchers meet to decide whether to change Tory rules so they can throw her out of office.

Ministers are gathering in Downing Street for the first time since the Prime Minister agreed to an EU Brexit extension until Halloween this year.

With growing pressure on her to resign, one of her former allies has said she should quit today for ‘breathing life into Nigel Farage’.

Senior backbencher Nigel Evans has abandoned his long-standing support for the Prime Minister and said she should leave now to avoid the ignominy of being thrown out by her own MPs within weeks.

Mrs May will face a renewed effort to force her from office today as senior backbench Tories meet to discuss her future and have set a June 12 deadline for her to stand down.

The 1922 group of backbenchers will also discuss whether to change party rules to allow a new confidence vote in her leadership before December.

Theresa May, pictured with her husband Philip on Easter Sunday, will face ministers today as her own MPs plot to remove her

The joint executive secretary of the 1922 Committee says the Conservatives need new leadership and that the process ‘can’t start soon enough’ – but Nigel Evans says she should go now. 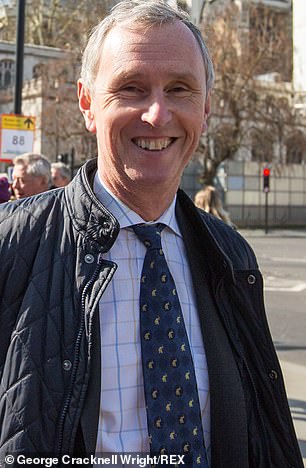 He said: ‘To be honest I would be delighted if she announced today she was announcing her resignation and we could then have an orderly election to choose a new leader of the Conservative Party.

‘I believe the only way we’re going to break this impasse properly is if we have fresh leadership of the Conservative Party. If there was an announcement today by the Prime Minister then of course we could start the process straight away.’

He added: ‘I have never said this before. I did say to Theresa May “Do not breathe fresh life into Nigel Farage”, and that’s exactly what she has done. He has gone from his death bed to the Olympics, because Brexit hasn’t happened.’

The Ribble Valley MP said he had reflected on the situation over the Easter break and said the ‘severe problems’ over Brexit meant Mrs May had to go ‘as soon as possible’.

He told the BBC: ‘I hope she does accept the fact the call for her resignation now is growing into a clamour.

‘It’s not now just within Westminster – we’ve heard the news that 70 chairs of Conservative Associations throughout the country have now said that they reluctantly have no confidence in the Prime Minister.’

When asked when Mrs May should step down, he added: ‘Preferably today.

‘We need fresh leadership of the Conservative Party as quickly as possible – it can’t start soon enough.’

The former deputy speaker said it was ‘ludicrous’ for the party to be fighting European elections costing more than £100million.

‘We are asking candidates to put themselves forward for an election saying, ‘We hope to have left before you can take up your seat’,’ he said. ‘In what business would the chief executive be able to stay if £109million had been wasted? It’s ludicrous for us to go down this route.’

Prisons Minister Rory Stewart has backed Theresa May as ‘our best hope’ of resolving Brexit.

He said: ‘I think she is doing a very, very important job and she needs to get the first stage of Brexit done.

‘The idea somehow that some new, fresh leader with extraordinary charm and nimble feet would be able to suddenly get the deal across the line is mistaken.

‘It’s nothing to do with the individual, it is that people disagree deeply over Brexit.’ 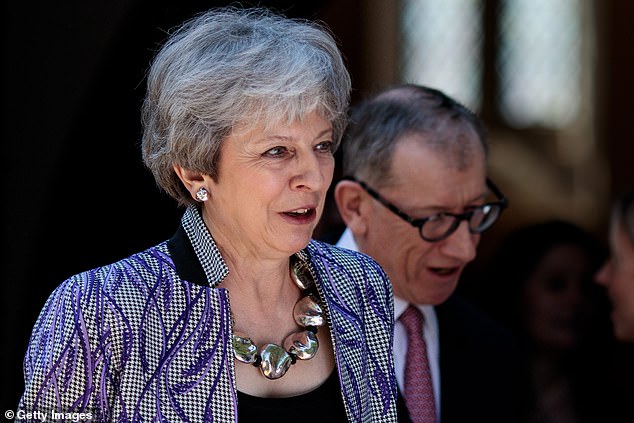 Theresa May, pictured at church on Easter Sunday with her husband Philip, could face pressure from backbench Conservative MPs to name a departure date

At the same time, it emerged that Tory Party bosses will be forced to hold an emergency conference of grassroots members after 70 local party chairmen signed a petition designed to force the PM from office.

Although they can’t force Mrs May out, such a vote would intensify the pressure on her. After enjoying a week’s walking holiday in Wales, the PM will pin her hopes on cross-party talks with Labour to secure a Brexit deal. But neither she nor Jeremy Corbyn will attend the first meeting this afternoon.

The Mail understands there were no formal meetings between the two sides last week, with discussions limited to ‘positions exchanged on paper and email’.

One ministerial source said the PM has three weeks ‘at most’ to secure a deal with Labour or move on to a series of binding votes on different options. The 18 members of the 1922 executive are due to meet at 5pm in Committee Room 14.

One source said they expected a majority would back giving Mrs May an ultimatum to go by a particular date.

That could be in May after the European elections or as late as June 30, the date after which Mrs May said she could not continue as PM.

The source said that if Mrs May refused, the committee could tear up the rules, almost guaranteeing a no-confidence vote within days, or hold an ‘indicative vote’ of MPs on whether she should go.

One said: ‘If we fight the EU elections it would be an appalling failure and she will have to go. We are not going to allow her to choose a date. We are going to give her a date.’

Allies of Mrs May insist she has no intention of hanging on. One said: ‘The PM is not in a position where she wants to be there forever. If we can find a way to get a deal through Parliament she will go.’

However Dinah Glove, the chairman of the London East Conservatives, told the Mail Mrs May had abandoned her pledge to leave on March 30, abandoned her ‘No Deal is better than a bad deal’ mantra, and brought Jeremy Corbyn into the heart of government. ‘She has to go now,’ she said.