Boris Johnson has been labelled a ‘circus act’ by his old deputy Sir Alan Duncan after it emerged he had called the French ‘turds’ over Brexit when he was still foreign secretary.

The remark had been due to be broadcast in a BBC documentary last November but it was removed after pressure from the Foreign Office amid fears that it would harm diplomatic relations.

But Mr Johnson appeared to make light of the comment when he was asked today whether he had ever offended the French when he was in the Cabinet as he headed to a Tory leadership hustings event.

Standing with supporters and alongside his father Stanley Johnson, the favourite for Number 10 replied ‘pas du tout’ – French for ‘not at all’.

It came as Theresa May refused to say whether she knew that Mr Johnson had uttered the crude remark as she warned whoever succeeds her they will have to work with the EU to get a deal over the line.

The comment has reignited questions about Mr Johnson’s suitability to be the next prime minister and is the latest in a series of controversial things he has said.

Foreign Office Minister Sir Alan, who served under Mr Johnson and who is backing Jeremy Hunt to be PM, labelled his old boss a ‘circus act’ and suggested he was not a ‘really serious person’.

Mrs May was grilled about her potential successor as she conducted interviews in Osaka, Japan as she attended a G20 summit.

Boris Johnson, pictured leaving the Foreign Office when he was still Foreign Secretary, reportedly insulted the French in a fly-on-the-wall BBC documentary but the comment was removed from the broadcast

Asked directly by ITV if she was aware that Mr Johnson had called the French ‘turds’, she replied: ‘I believe that whoever succeeds me as leader is going to be working with the European Union and with our Parliament to find a way through this to ensure that we can do what we wish to do, which is deliver on the vote of the British people.’

Pushed again on whether she was aware of the comment having been made at the time, she said: ‘What I believe whoever takes over will be doing is ensuring that they can work with the EU and with our Parliament to find a way through.’

The ‘turds’ comment had been due to be broadcast in a documentary about life at the Foreign Office which was broadcast on BBC Two in November last year.

The Foreign Office apparently asked for it to be cut, with a leaked Whitehall memo suggesting the remark would make Anglo-French relations ‘awkward’.

Senior diplomats had also privately expressed concerns that it could make it harder for the UK to get a good Brexit deal.

Mr Johnson had resigned as foreign secretary in protest at Mrs May’s Brexit plan before the show went to air.

Sir Alan previously revealed that he had been described as Mr Johnson’s ‘pooper scooper’ by a European colleague because he was viewed on the continent as having to clean up after his boss.

Sir Alan told the BBC this morning that he got used to ‘diplomatically awkward’ moments while serving under Mr Johnson as he suggested the favourite to win the keys to Downing Street would not be taken seriously by other countries.

Talking about the ‘pooper scooper’ comment, Sir Alan said: ‘A European Foreign minister said that to me, described me as such, funny on one level but it takes up a serious point to the difference between the two candidates who are trying to become prime minister.

‘You can have a circus act or you can have a really serious person who does do detail and who is respected in other countries and who will be taken seriously in discussions on whatever topic.’ 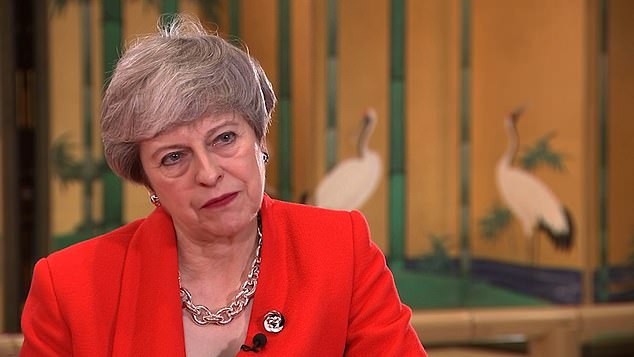 The Prime Minister, pictured today in Osaka, Japan, delivered a warning to both of the men fighting to succeed her that they will have to work with the EU if they want a better Brexit deal

Sir Alan, who has been a vocal critic of Mr Johnson, also said there had been a significant level of concern within the Foreign Office about the documentary.

‘I do remember that the filming of the documentary was a pretty high octane venture. There were some pretty bumpy moments when we thought ‘ooh, we don’t want that to appear’,’ he said.

Mr Johnson previously sparked outcry after it was claimed he had said ‘f*** business’ after he was asked about Brexit business concerns. Mr Johnson has never denied making the remark.

A spokeswoman for the BBC said: ‘The programme set out to reflect the realities of life inside the Foreign Office, the production team made judgments about what was in the programme and they are satisfied that the programme achieves its ambitions and has the content they wanted.’