Mrs May called an emergency Brexit meeting for January 2

Cabinet ministers have been summoned to an emergency meeting on January 2 by Theresa May – cutting short their Christmas break, it was reported last night.

The Prime Minister wants to have discussions about a no-deal Brexit as she tries to pile pressure on her critics ahead of a vote on her withdrawal plan early next month.

There is growing confidence within the Government that Mrs May’s deal will pass a vote in the Commons, although it may be on the second or even third attempt according to the Financial Times.

Environment Secretary Michael Gove is thought to be particularly worried about a disorderly exit from the EU, which he thinks could lead to empty supermarket shelves if the Dover-Calais trade route is blocked.

The Cabinet meeting will be led by Brexit Secretary Stephen Barclay, a week before debates on the deal restart in Parliament.

One minister told the FT the meetings are ‘all about show really’. 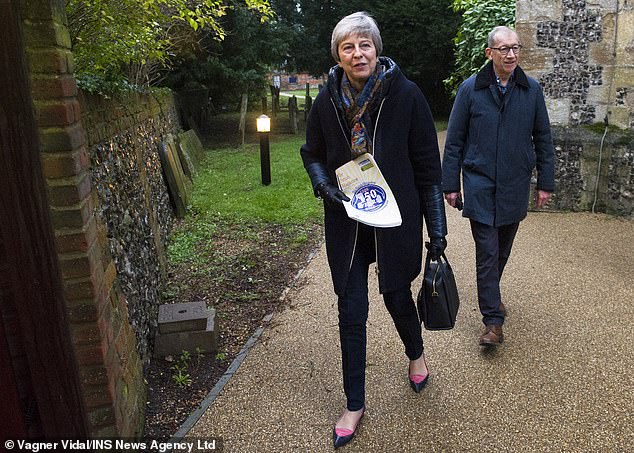 ‘It’s to prove that we are pulling out all the stops to prepare for the worst,’ the minister said.

Meanwhile Mrs May called for warring political factions to drop the labels ‘Leave’ and ‘Remain’ to heal divisions within the country.

In a letter seen by the Daily Express, the Prime Minister said that Christmas was a time ‘to put aside our differences and focus on what really matters’.

‘Now, two and a half years after the referendum, it is time for us as a country to do the same,’ she said.

‘To dispense with the titles of ‘Leave’ and ‘Remain,’ and instead find common ground and focus on what we can achieve together.

‘For I believe that’s what the vast majority of people in this country want to happen.’

She added: ‘The sooner MPs agree the right Brexit deal, the sooner we can all get back to dealing with those issues and building a country that works for everyone.’