Theresa May is expected to delay Tuesday’s parliamentary vote on her Brexit deal and head to Brussels to demand better terms from the EU.

According to the Sunday Times ministers and aides have convinced her she needs a ‘handbag moment’ – to emulate Margaret Thatcher – and demand better terms from the EU.

A senior cabinet source told the paper: ‘People in No. 10 think she needs to have a “handbag moment” where she says: “Up with this I will not put.”‘

She is expected to push back Tuesday’s vote and meet with EU chiefs in Brussels on Thursday, the Sunday Times say.

Theresa May is expected to head to Brussels and delay Tuesday’s meaningful vote on the Brexit deal as she seeks new terms, depsite claiming her deal was the best possible last week 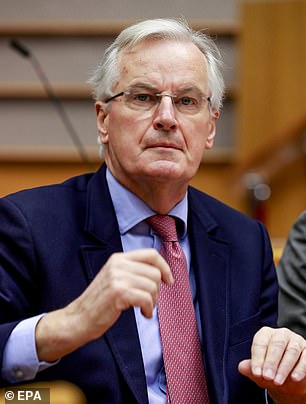 Most pundits expect her to lose Tuesday’s vote and ministers are concerned the scale of defeat would be such it could bring down her government.

Ministers have urged her that unless she can win over the Brexiteers with a show of strength she risks being ousted by opposition leader, Jeremy Corbyn.

But Downing Street rejected suggestions May could delay holding the Brexit vote on Friday.

A Downing Street spokesman said: ‘The vote is going ahead on Tuesday.’

With her own future in the balance, May has repeatedly threatened that her deal, which envisages continued close ties with the EU, is the only one on the table and that the alternatives are a painful ‘no-deal’ exit from the EU or possibly no Brexit at all.

But the pressure on May mounted over the weekend after yet another minister – Will Quince – quit his government role on Saturday in opposition to her deal, and the Sunday Times said further resignations were expected.

One minister told the Sunday Times that he would quit if the vote went ahead, and the newspaper added that at least two Brexit-backing ministers and two members of the whips office were also on the verge of resigning.

The Sunday Times also said that some ministers were planning for a second referendum on EU membership, naming cabinet office minister David Lidington, and justice secretary, David Gauke, as those considering that as a possible outcome.

The PM is expected to ask for more time – despite the EU warning there could be no extension – or for a concession to be made on the Irish backstop which caused fury among Brexiteers who believe the UK could be locked into the customs union indefinitely.

May suffered a bruising triple defeat in the Commons on Wednesday as she tried to sell her deal to MPs, and in an unprecedented embarrassment, her government was found in contempt of Parliament.

The mid-week rout no doubt meant advisers went back to the drawing board, as the Prime Minister sent ministers across the UK to sell her deal.